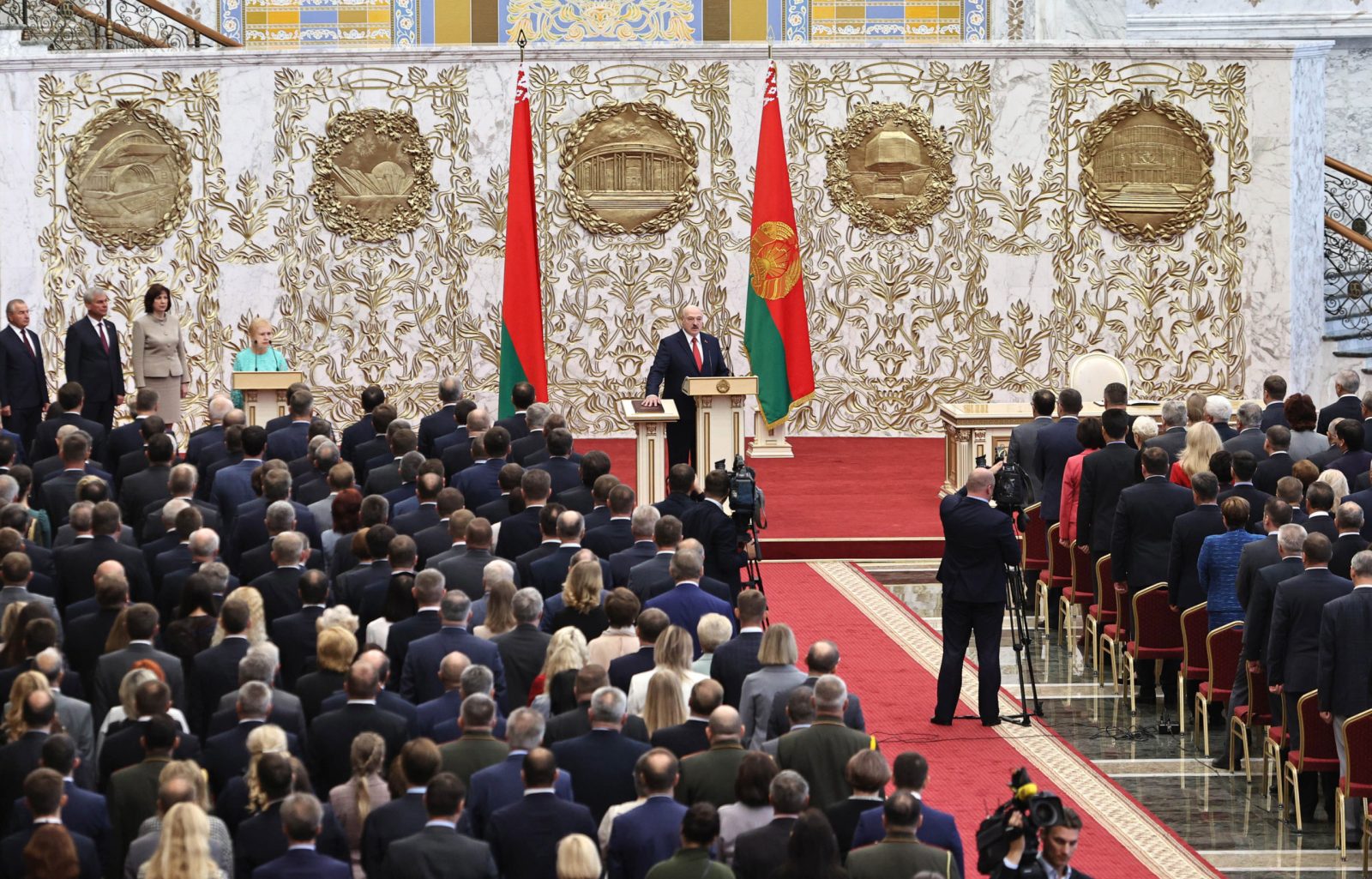 MINSK, Sept 23 (Reuters) - Ignoring calls for an end to his 26-year grip on power, President Alexander Lukashenko of Belarus was sworn in for a sixth term on Wednesday after an election that the opposition and several foreign governments say was rigged.

The ceremony would normally have been publicised as a major state occasion but was instead held without warning following Lukashenko’s claim of a landslide victory in the Aug. 9 election.

The opposition, which has staged more than six weeks of mass protests demanding his resignation, denounced the inauguration as illegitimate and called for more demonstrations on Wednesday evening.

The United States and European Union are drawing up sanctions against officials involved in the election and a subsequent crackdown by the security forces.

The official news agency Belta said Lukashenko placed his right hand on a copy of the constitution and swore the oath of office at a ceremony attended by several hundred people.

The 66-year-old leader said the country needed safety and consensus “on the brink of a global crisis”, an apparent reference to the COVID-19 pandemic.

“I cannot, I have no right to abandon the Belarusians,” he said.

Some chanted “Sasha, come out, we’ll congratulate you!”, referring to the diminutive form of Lukashenko’s first name.

Rumours had swept Minsk that the 66-year-old leader, in power since 1994, was preparing for a snap inauguration ceremony when a motorcade swept through the centre of the capital earlier on Wednesday.

An opposition politician, Pavel Latushko, said the swearing-in was like a secret “thieves’ meeting”.

“Where are the jubilant citizens? Where is the diplomatic corps?” he posted on social media. “It is obvious that Alexander Lukashenko is exclusively the president of the OMON (riot police) and a handful of lying officials.”

Latushko called for “an indefinite action of civil disobedience”.

Germany reiterated that it did not recognise Lukashenko as president and called for EU sanctions to be agreed as soon as possible.

Lithuanian Foreign Minister Linas Linkevicius said on Twitter: “Such a farce. Forget elections…His illegitimacy is a fact with all the consequences that this entails”.

Lukashenko, taking the oath for a new five-year term, promised to “faithfully serve the people of the Republic of Belarus, respect and protect the rights and freedoms of the person and of the citizen” and defend the constitution.

He has so far withstood the protests with backing from his ally, President Vladimir Putin of Russia.

Despite its population of only 9.5 million, Belarus matters to Russia as a buffer state against NATO and a conduit for Russian exports of oil and gas.

At a summit last week, Putin granted Lukashenko a $1.5 billion loan, and the two countries are holding “Slavic Brotherhood” defence exercises in Belarus.

As part of those drills, Russian paratroopers parachuted into Belarus on Wednesday.

Kremlin spokesman Dmitry Peskov said the swearing-in was “absolutely the sovereign decision of the Belarusian leadership”. Asked if Putin was invited, he said it looked as though the presence of foreign leaders had not been envisaged.

The United Nations agreed last week to step up monitoring of reported human rights abuses in Belarus. Rights investigator Anais Marin said more than 10,000 people had been “abusively arrested” since the election, with more than 500 reports of torture and thousands “savagely beaten”.

Belarus authorities have said the police are humane and professional, and have declined to comment on specific allegations of abuses. (Additional reporting by Matthias Williams and Andrius Sytas, Writing by Mark Trevelyan and Matthias Williams; editing by John Stonestreet and Angus MacSwan)