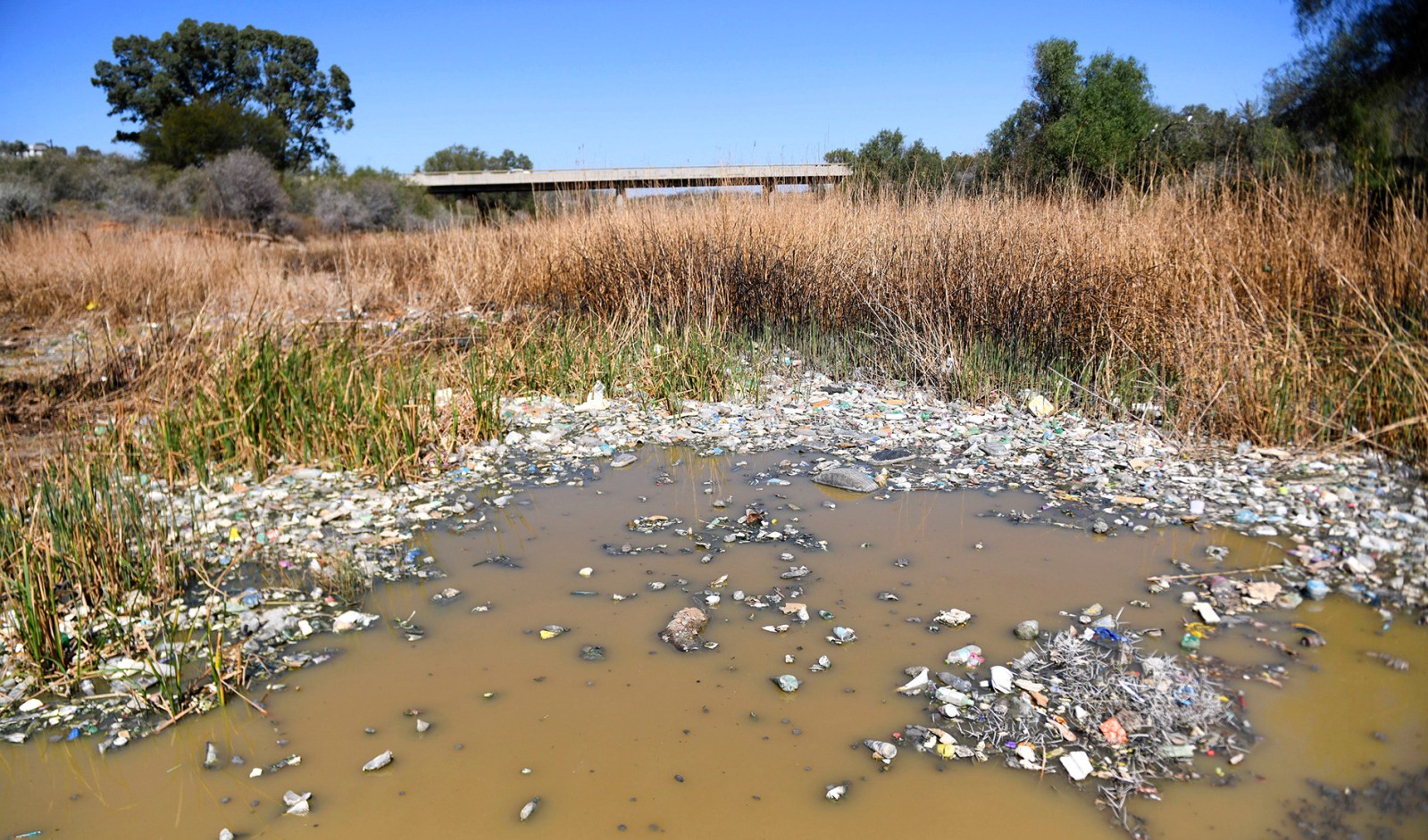 A sewage spill at the Kroondrif bridge. (Photo: Theo Jeftha)

Despite interventions, directives and masses of complaints, sewage spills have become a daily occurrence in Graaff-Reinet with residents complaining of headaches and serious illness. In its latest integrated development plan the Dr Beyers Naudé Municipality has confirmed that sewage spills in town ‘have reached critical proportions’.

Lorraine Swarts stood helpless in the backyard of her house in Asher Street in Graaff-Reinet and watched how masses of bubbling raw sewage ran through her backyard and into the street.

“It is washing day today,” she said. “And I can’t get to the line to hang anything. There is a small baby here. I don’t know what to do anymore. It is not the first time that this is happening.”

By Monday, 7 September the spill had been running for a fourth day.

Community member Sias Smith said while the spill was fixed by the municipality later that day, no clean-up was done, leaving the contaminated water and toilet paper as is.

At the Kallie Koeberg Sport Stadium children were jumping over a steady stream of sewage running down the dirt road. Two large manholes have been left uncovered.

At Kroondrif raw sewage has spilled over in a large area next to the river and onto the service road.

Across the river at Cyprus Grove, Jeanette Williams said they have always had to live with “a whiff or two” of sewage for the past decade.

“But with loadshedding the pumps don’t work. Then it gets really bad. Especially at night; it is unbearable. We put essential oil on our nostrils just so we can fall asleep,” she said.

“Everybody tells us a different story. At nighttime it gets unbearable here. The municipality insists that they are dealing with the problem but our noses tells us that nothing has been done. Even our drinking water smells like sewage.

“Most days my house smells like someone used every toilet in the building and did not flush. Even our cars smell like sewage some days. People are really struggling.

“Every morning you wake up with a headache,” she said.

Despite claims by the municipality that each spill is cleaned up, evidence of a recent spill is clearly visible from her house.

She said once, when they asked why a new pump that had been installed at a pumping station close to her house was not working, council officials told her that the new pump had to “rest” so they were using the old pump.

Annette Theron said she and her new husband moved into their house in Cyprus Grove “with stars in their eyes” close to two years ago.

Since then she had to fight non-stop to get the sewage problem in their neighbourhood brought under control.

“I sat in the office of the engineer and I was crying. I said I will help.

After two workers died due to a gas leak while cleaning a manhole in the town, workers stopped attending to such problems.

“I even offered to have grills manufactured to stop the system from being blocked,” Theron said. “But they don’t want my help.”

She said February and May were terrible months, as was winter in Graaff-Reinet.

“But they always report that everything is in order.

“From 21 June the situation deteriorated again. The one pump has a floating switch and this gets entangled in fabric and other foreign objects that are in the sewer. Some days they would battle to get the pumps going.

“I feel some days that I am the only one struggling like this but I know that I am not. I have very little hope anymore that they can fix this. There will always be sewage spills in this town.

“It is difficult to sleep and we have been incredibly ill after each big spill.

“I have started keeping a ‘shit diary’, where I have noted the dates and times of all these spills. We will need some more help. I don’t understand why the municipality doesn’t want the community’s help. There is a lot of expertise in our community. We have a lot to offer them,” she said.

The Dr Beyers Naudé Local Municipality, based in Graaff-Reinet, has so far ignored a request for detailed comment on their plan to deal with the sewage issue in town.

In their integrated development plan that was published in July the municipality stated that “sewage spills in Graaff-Reinet have reached critical proportions”.

Previously, the municipality told the Democratic Alliance’s constituency leader for the Camdeboo District, Samantha Graham-Maré that the pumps and generators were being vandalised, pumps were too small, power outages and the drought worsened the problem, and fabric got caught in the system.

Spokesperson for the Department of Water and Sanitation, Sputnik Ratau, said earlier this year that the municipality was addressing the sewage pump problem and the system’s repairs.

In December 2019, the Minister of Human Settlements, Water and Sanitation, Lindiwe Sisulu confirmed that her department had issued the municipality with a directive dated 4 November 2019. The municipality responded on 18 November 2019, confirming that all three sewage pump stations were repaired and fully operational. It also said spill areas had all been rehabilitated.

At the time Sisulu said new pumps would be procured within 12 weeks, to ensure back-up pumps were in place.

“The department’s regional office has allocated R7-million in funds to the municipality for the planned projects,” the minister said.

“Due to the declaration of [a] drought disaster, the department has allowed these funds to be re-prioritised and most of these funds have been assigned to emergency water supply schemes.”

She said the municipality has reported that the site of each spill had been rehabilitated.

But Smith said all the municipality ever did was sprinkle chlorine over spills. DM/MC