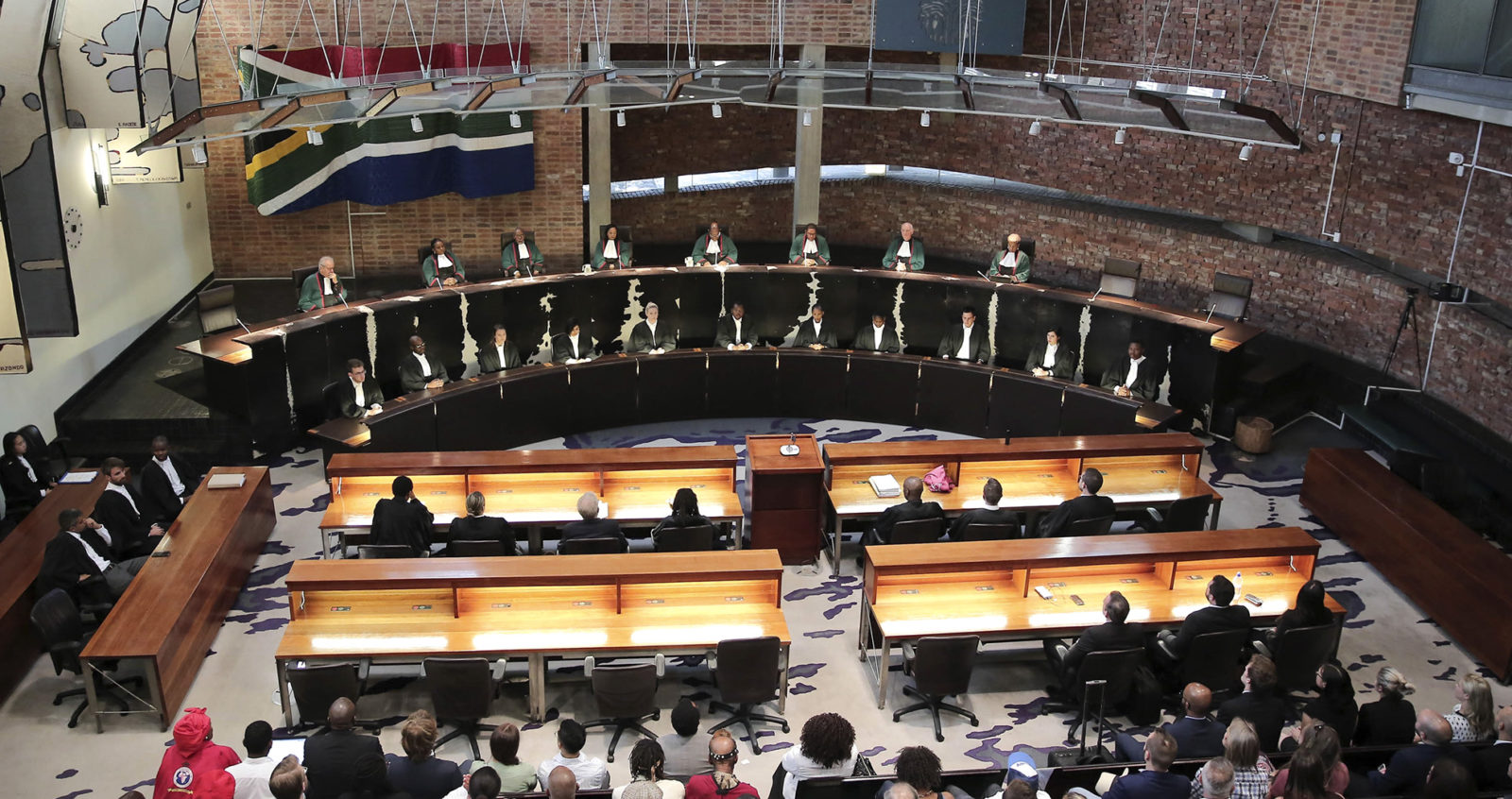 A new online platform and exhibition launched by the Constitutional Hill Trust makes a collection of 220,000 documents available to the public. It tells the story of how a ‘repressive racist state was transformed into a democracy’ – and South Africa’s Constitution is the star of the show.

“Law and narrative are inseparably related,” he argued.

His quote captures the essence of what this impressive new online platform is about, because the story of the South African Constitution is an “epic” tale. Its elements consist of – among other things – colonialism, decolonisation and racism, as well as the fight for justice, dignity and equality.

It is a story that deserves to be told.

With a collection of 220,000 documents, it is quite some narrative that the Constitutional Hill Trust has assembled and made available to the public.

The 1996 Constitution can rightfully be described as the culmination of the 20th century human rights experience – not just in South Africa, but worldwide. This needs explanation.

I will focus on the global “epic” behind the South African Constitution, which is closely linked to the post-1945 evolution of international human rights. In doing this, one should always acknowledge that there is also a domestic “epic” that goes back to the ANC’s 1923 African Bill of Rights, and the 1943 African Claims in South Africa document.

The 1948 Universal Declaration on Human Rights was adopted the same year apartheid was introduced. This historical overlap was not just a bitter irony. It reflected a deeper truth. Apartheid was a constant and devastating shadow that would follow the human rights project throughout the Cold War.

What unfolded in South Africa became defining for international human rights politics and was a critical factor behind several significant human rights breakthroughs. The examples are many.

In 1951, the United Kingdom and the United States led an attempt to shut down the human rights bodies at the United Nations, including the Commission on Human Rights that had drafted the Universal Declaration. This move by the major powers was initiated under the label of an “organisational efficiency review”. In reality, it was an attempt to undermine the normative and political food chain that would nurture progress with human rights law-making and monitoring at the UN.

The intention was to protect UK colonial interests and the Jim Crow rule of racial segregation in the American South.

If this attempt had been successful, it could have dramatically altered the work of the nascent international organisation. However, several states from the global South mobilised and saved the UN human rights project.

As part of their resuscitation efforts, the right to education was from 1952 placed at the vanguard of international human rights work. A path-breaking global study was prepared from 1953 by a UN-appointed special rapporteur and was finally published in 1957. The introduction of the Bantu Education Act in 1953 became defining for the study process. This South African law was a strong symbol of everything that was wrong with discrimination in education.

South Africa was the first country featured in the report. The global effect of the Bantu Education Act was that it sharpened the international understanding of human rights violations. The 1957 report became the foundation for the 1960 flagship Unesco Convention on Discrimination in Education. It also helped energise broader UN human rights work after the near-death experience in 1951 and 1952.

The mid-1960s witnessed a legal breakthrough for international human rights, with the UN’s adoption of three major conventions. The 1965 Convention on Elimination of All Forms of Racial Discrimination was adopted first. The convention singled out apartheid in South Africa as the only country-specific example of racism mentioned in the text.

The 1965 convention also set the precedent for the adoption of the major Covenants on Civil and Political Rights and Economic, Social and Cultural Rights that followed in 1966 after many years of stalled negotiations. The international legal foundations were now established. It was time to start monitoring human rights abuses around the world more systematically.

In 1967, the first so-called UN Special Procedures for the investigation of human rights violations was created. It focused on the situation in southern Africa emerging in response to the different crisis situations in South Africa, Namibia, what was then Rhodesia, Angola and Mozambique.

UN experts travelled to the region to interview witnesses and victims of violations and reported on their findings to international fora. It was a significant step forward for international human rights monitoring. This would expand during the 1970s.

The name of Steve Biko became a powerful point of reference in UN human rights debates in the immediate aftermath of his brutal killing in September 1977. It was such a poignant example that several member states, who were trying to get the drafting of a Convention Against Torture off the ground and to advance international accountability for gross human rights violations, made references to his name.

There was at this time also heightened attention to the questions of extrajudicial killings and enforced disappearances. In hindsight, 1977 became a turning point in energising the international norm-making efforts in all of these areas, culminating with the adoption of the 1984 UN Convention Against Torture.

Reading through the UN sources, I could not help but think of this as “the Steve Biko moment in international human rights law”. The South African reality was certainly leaving its mark again on the international community and its normative universe.

The features of the “epic” changed dramatically with the end of the Cold War. The long and devastating South African shadows instead turned to light that illuminated the international stage.

The new online platform tells the story of how a “repressive racist state was transformed into a democracy”. There are many aspects and many actors involved with this story. However, there can be little doubt that the South African Constitution plays a major role.

The various historical strands outlined above now came together in a new way. That is why it is fair to say that the 1996 South African Constitution is the culmination of the 20th century human rights experience. Such a status means that it embodies something incredibly powerful both on a national and global scale.

In 2012, in an interview with an Egyptian TV station, the recently deceased US Supreme Court Judge Ruth Bader Ginsburg famously responded to a question on whether Egypt – in the post-revolutionary moment after the fall of dictator Hosni Mubarak – could use constitutions of other countries as a model for what was ahead. Bader Ginsburg stated:

“I would not look to the US constitution, if I were drafting a constitution in the year 2012. I might look at the constitution of South Africa… That was a deliberate attempt to have a fundamental instrument of government that embraced basic human rights, had an independent judiciary… It really is, I think, a great piece of work that was done.”

That is no small compliment from someone of her stature. The fact is that it reveals the importance of the South African Constitution in the international human rights firmament in our present age.

The Constitution and the work of the Constitutional Court have turned South Africa from representing the negation of human rights, into a model for others to follow.

The court’s social and economic rights jurisprudence, in particular, has set a high international standard for legal interpretation that fewer than a handful of other countries can match.

The international community now learns from South Africa for the better. Despite the serious shortcomings in realising the provisions of the Constitution for too many citizens – an undeniable fact that the “Our Struggle, Our Freedom, Our Constitution” online platform specifically addresses and aims to change – these transformations deserve to be highlighted and indeed celebrated.

The new online platform shows the vibrancy of the Constitution. The launch is not just a South African event, but one of global significance as well. And with good reason because the South African Constitution – with its powerful bridging of civil, political, economic, social and cultural rights and its remarkable jurisprudence – is a template for the 21st century international human rights project that we need.

The events of 2020 have only confirmed this. The international community should learn anew from the South African experience and the vital message captured in its Constitution.

In our Covid-19 pandemic age, many South Africans themselves need to revisit it and make the historical wisdom of the Constitution the foundation for their struggle for a more just and equal South Africa or, in the words of Robert Cover, the “world in which we live”.

The outcome is not guaranteed, but one thing remains certain: the epic continues and we can shape the narrative. DM/MC

Steven LB Jensen is a senior researcher at The Danish Institute for Human Rights. He is the author of the prize-winning book The Making of International Human Rights. The 1960s, Decolonization and the Reconstruction of Global Values. His most recent essay Our rightful place in the sun: Marcus Garvey and the 1920 Declaration of Rights of the Negro Peoples of the World was published in Daily Maverick last month.