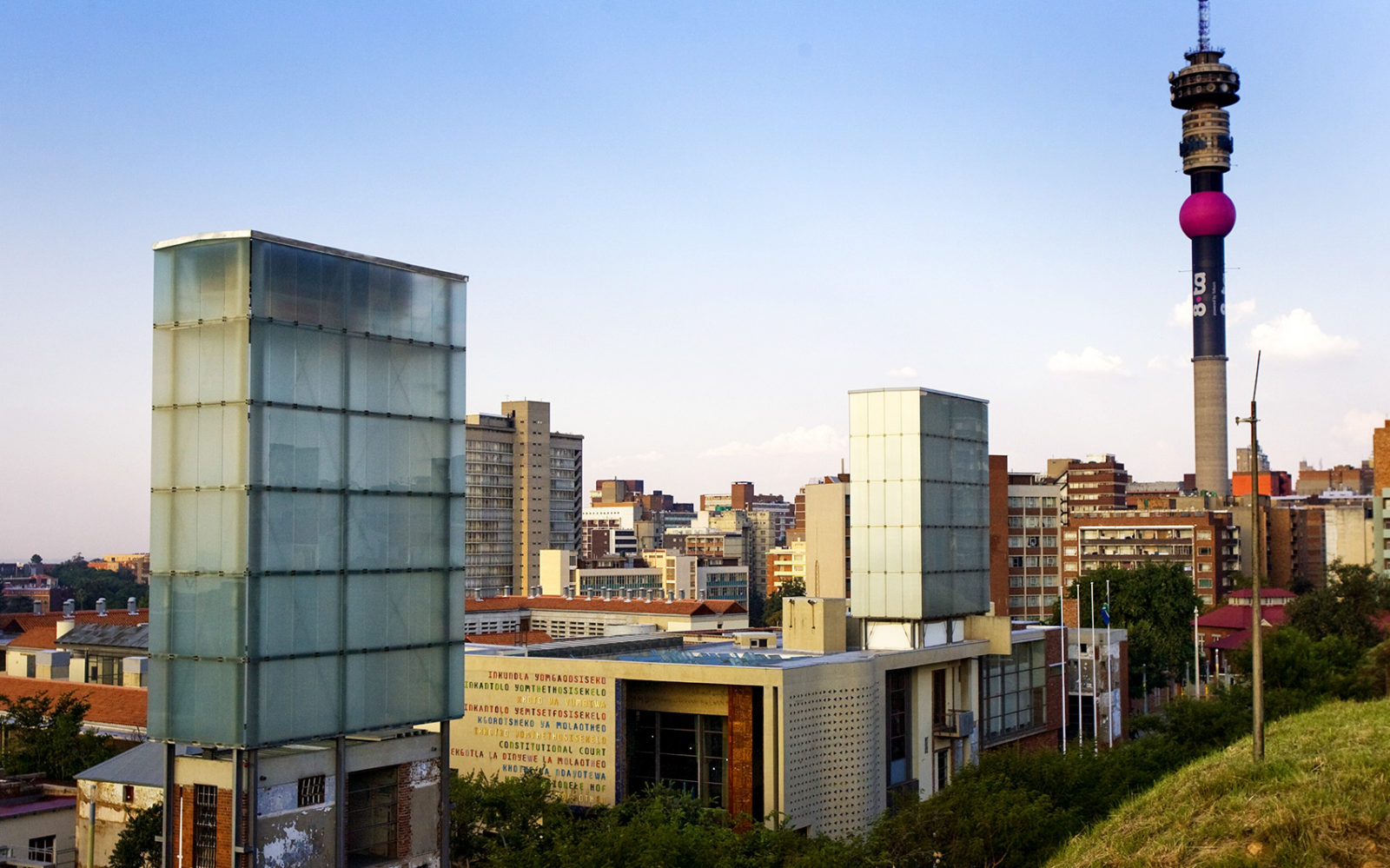 On September 24, Heritage Day, a new website documenting the making of the Constitution goes live. In this article, two of its bricklayers, Lauren Segal and Lwando Xaso, explain what working on this project meant to them, concluding that ‘our founding story reminds South Africans of how practised we are at transforming despair into hope.’

Making the story, Our Struggle, Our Freedom, Our Constitution, was a bit like making the Constitution. Many role-players, voices and contributors came together to realise a dream. The dream was to tell the story of the making of our Constitution in an accessible way, drawn from archival material that was irrefutable and recorded multiple voices from all sides who took part in making the Constitution. The objective was to inspire those who weren’t there, to feel just a little bit closer to the moment of our birth as a democratic nation.

It started as a modest project to make an exhibition of the Constitution for visitors to Constitution Hill. The Hill has become the pre-eminent human rights precinct in the country. The Constitutional Court functions there, side by side with the prisons where people such as Nelson and Winnie Mandela, Helen Joseph and Robert Sobukwe were locked up.

Ten years ago, Lauren Segal, a white historian and curator in mid-career, and Lwando Xaso, then a young black law clerk just starting on her professional journey, met on the steps of the Constitutional Court. Then, it was to discuss landmark cases for a book commissioned by the Constitution Hill Trust to celebrate the 15th anniversary of the Constitution.

Seven years later, we came together again. Lwando had decided to leave corporate law to commit herself to this project and Lauren was at the end of a gruelling cancer journey. This time we were ignited by the opportunity to delve deeper into the story that transformed South Africa into a democratic nation and shaped both of our lives in different ways.

An assembled team journeyed to museums and archives across the ocean to imbibe best practice and to distil the challenges of creating an enticing visitor experience. We formed creative relationships with the Smithsonian’s National Museum of African American History and Culture, as well as with Local Projects, a pre-eminent New York museum design company.

Importantly, we created partnerships with organisations at home to ensure that it worked with the same unifying spirit as the Constitution-making process itself.

All stories have the power to teach, influence and inspire. But for all of us, there was something especially transformative about discovering the nitty-gritty of the story of the constitutional negotiations and the writing of our Constitution.

This project evolved when revelations of State Capture and corruption were sapping people’s faith in the integrity of our democracy. The work we did reminded us of our capacity as a people and a nation to overcome the most tremendous obstacles and challenges and come together at moments of great discord. It was an opportunity to remind ourselves of the high stakes at the centre of the South African drama.

Should we have three rotating presidents representing different ethnic groups and governing by consensus? Or should we have a nonracial democracy with a Bill of Rights in a united South Africa? How could we avert an all-out war when armed white right-wing extremists joined political forces with leaders of former homelands in a common threat to derail the first democratic elections?

Reading about the determination, courage and ingenuity that enabled us to overcome these issues, heartens us in our struggle to deal with problems we face today.

What is astounding about this story is how little is generally known of the Constitution’s deep African roots. In 1906 Pixley ka Seme declared that there would be either a constitution or revolution. In 1923 the ANC produced its first Bill of Rights. In 1943 it enlarged them in its African Claims document. In 1955 came the Freedom Charter. And in 1961 the call for a National Convention.

Our work story took on a new depth after extensive visits to the National Archive and Records Services of South Africa (NARSSA) in Pretoria, home to the founding documents of our democracy. Our core team, with a group of young political science students who had never visited an archive before, delved into the hundreds of brown dusty boxes containing precious material of our country’s heritage. The documents revealed the mindsets behind the respective bargaining positions; the nuances of arguments and debates that shaped specific provisions in the Constitution; the engagement of key players. The students walked away transformed in their understanding of our country and also engaged with the immense power of the archive as a persona in the telling of history.

In the words of our young colleague, Zinhle Mbali Mdluli:

Just over a year-and-a-half ago, our task changed substantially after repeated delays in the commissioning of the planned building at Constitution Hill. While we awaited our bricks-and-mortar home, we acted nimbly and decided to transform the treasure trove of material we had collected into an online exhibition instead. We became immersed in a digital world that was completely new to most of us — particularly Albie, the wise elder of our team, who far prefers papers to a screen. He continued to guide, to provoke and to steer us through — and ensure that every detail was recorded and massaged into the best possible presentation of history despite our new virtual environment.

The result was that when the Covid-19 pandemic arrived, we already commanded technology with a team of creators that enabled us to transcend all borders and boundaries. Besides, we were able to curate the content in a flexible manner which will actually end up benefiting the physical museum and archive once it is built.

The online exhibition and archive on the making of the Constitution now have many layers. We tell the story for those who are visual learners, and those who learn best from videos, diagrams or illustrations. We also have video and audio clips for auditory learners which will be added soon. And if you are a kinesthetic learner, who learns best by experiencing, or feeling, we have prompts for that too, so that you will remember the emotional connections and feelings from the story.

On a personal level, understanding this profoundly inspiring story has been a once-in-a-lifetime opportunity to gain a perspective on a history that one of us was too young to understand and which another had lived through, but had not fully processed its import. The nail-biting moments and the immense will of arch enemies to overcome their hatred provides us with courage and inspiration for facing difficulties in our own lives. It is inspirational precisely because it is not a story of rainbows with a triumphant ending. This story of collective struggle, grit, determination, clawing ourselves back from the brink of disaster, provides us with a template for confronting our inner struggles.

On Heritage Day 2020 — which is described as a day which embodies our “unity in diversity” — the story helps to answer the nagging question, “What is our heritage and how are we meant to celebrate it?”

The answer may be about braaiing and boerewors for some, wearing traditional attire for others. But here’s another way to see this day — understanding the constitution-making process gives real meaning to a crucial aspect of our collective heritage, namely, the spirit that has allowed South Africans to prevail time and again in overcoming seemingly insurmountable challenges.

Our founding story reminds South Africans of how practised we are at transforming despair into hope.

And it is not just understanding that will bind us as a nation. We all have a huge obligation as citizens to add our voices to our founding story. Our online exhibition is one attempt at telling the story and is nowhere near being complete. It is but an earnest start.

The Constitution Hill Trust’s platform is inspired by the spirit of “We, the people”, the first three words of the Preamble to the Constitution. It recognises that the transformation of our country was made possible by the people who dreamt, struggled and fought for freedom in their belief that “South Africa belongs to all who live in it, united in our diversity”.

The Trust invites all South Africans to add to the stories of the events that are told. Making history, helping us solidify our heritage. Engage in this work and join our team in adding to the story. DM/MC

"One man’s ‘magic’ is another man’s engineering." ~ Robert Heinlein