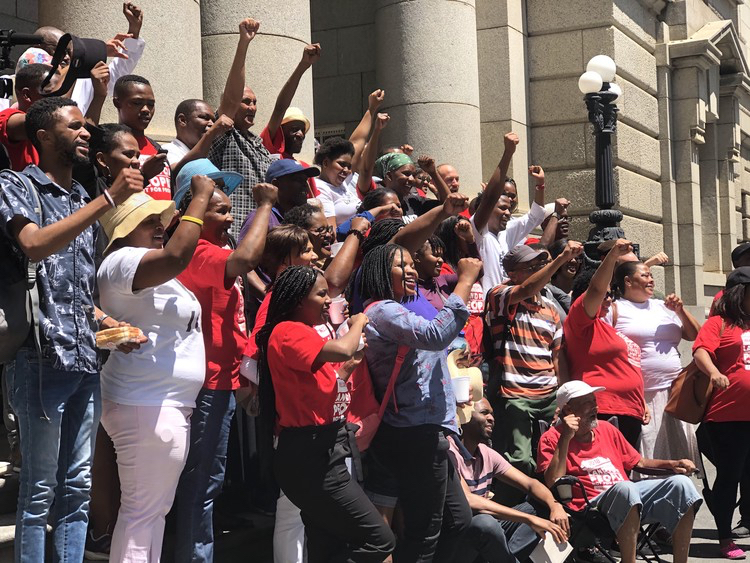 Supporters of Reclaim the City and Ndifuna Ukwazi chant on the steps of the Western Cape High Court in November 2019. (Archive photo: Madison Yauger)

On Friday 18 September, the Western Cape government announced that it will ask for leave to appeal the recent landmark Tafelberg judgment by the Western Cape High Court. The province says the judgment amounted to judicial overreach and harms its ability to competently govern. On Monday, the City of Cape Town announced that it too would ask for leave to appeal.

The provincial government objects to both the first order of the judgment, which concerned the Tafelberg sale, and the second order, which addressed the failure of the former premier of the Western Cape, Helen Zille, to consult with national government on the sale.

The City is also appealing both orders.

In a statement, Western Cape premier Alan Winde and provincial MEC of Transport and Public Works, Bonginkosi Madikizela, said the judgment is “judicial overreach”, and that the court orders “fundamentally impact [the Province’s] ability to competently manage this province and govern it as an independent sphere of government as envisaged by the Constitution”.

Judges Gamble and Samela had ordered both the City and Province to create, by 31 May 2021, a combined social housing policy to address constitutional breaches of the Housing Act of 1997 and the Social Housing Act of 2008.

The Phyllis Jowell Jewish Day School, which bought Tafelberg, will not be pursuing the sale any further. So the property remains with the Western Cape government.

But the province is still challenging the orders on a number of grounds. According to the notice of appeal these are:

The statement defends the province’s record on providing social housing, pointing to the recent start of construction at the first phase of the Conradie Better Living Model site at Pinelands, the first phase of which will provide 400 “housing opportunities”.

The City’s notice of appeal argues that judges Gamble and Samela erred by conflating the duties of the Province and City, saying that under current legislation the City has no obligation to redress spatial apartheid; that there was no basis to the court’s finding that the City had failed to comply with its constitutional obligations; and that by accepting Ndifuna Ukwazi’s definition of central Cape Town, the court had erred in a number of findings.

Like the Province, the City will be arguing that the ruling violates the separation of powers principle.

In response to the province’s announcement, Ndifuna Ukwazi, the land and housing-focused legal and activist organisation which led the four-year-long opposition to the Tafelberg sale, decried the appeal, saying it was a waste of public money.

It said that by appealing the judgment, premier Winde “shows a lack of courageous leadership required to use this direction from the court to radically break with the past, and meaningfully act on advancing urban land and spatial justice”. DM