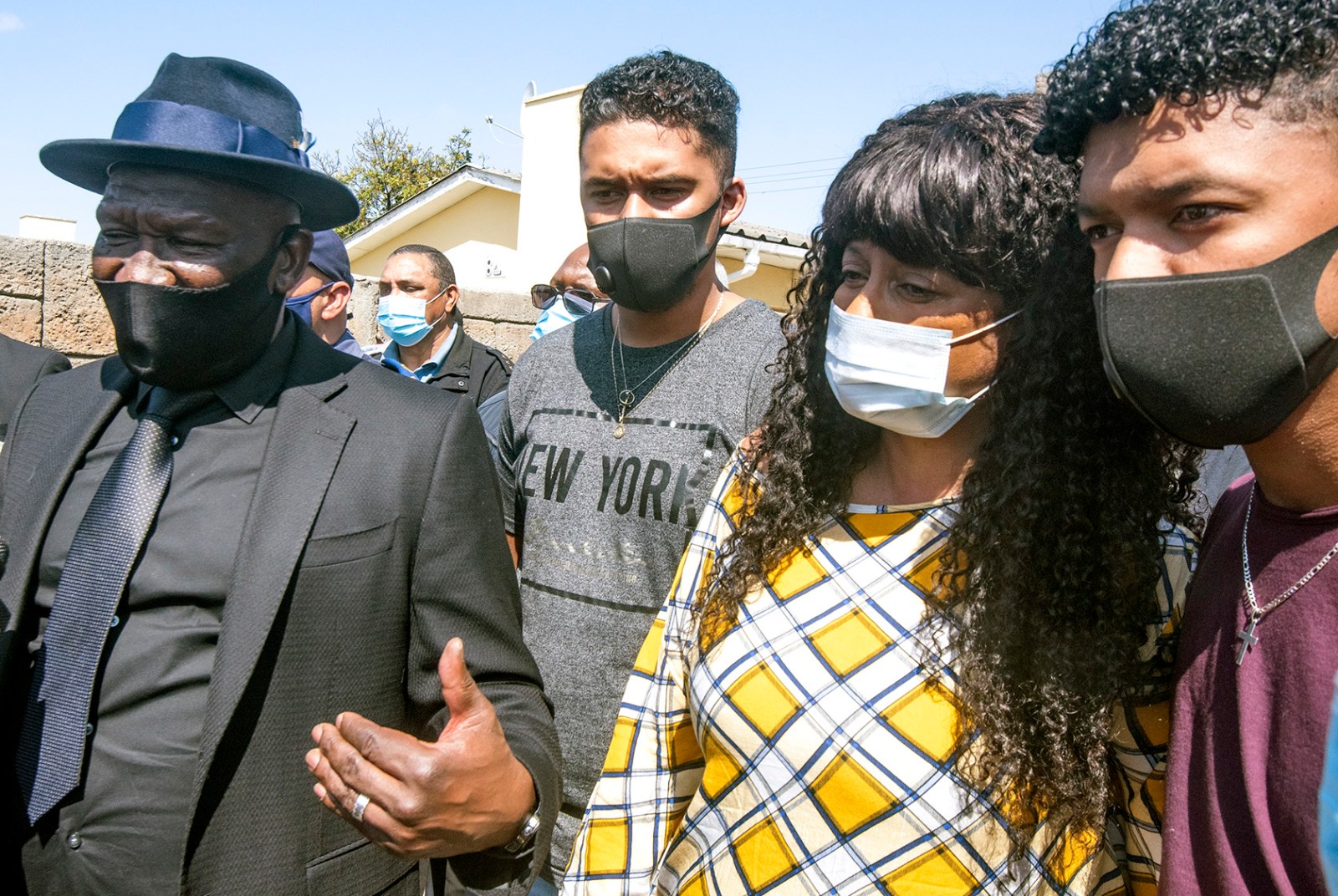 The cellphone of murdered Anti-Gang Unit member Lieutenant-Colonel Charl Kinnear was tracked on the day of his murder from 8am until 3.25pm. That’s how the gunmen knew exactly what time to deliver the fatal blow.

Charl Kinnear was killed around 3pm in front of his house at 10 Gearing Road, Bishop Lavis, on Friday 18 September 2020. Seconds before, Kinnear had called his son Carlisle, 24, to move his car so that he could park his vehicle.

As Carlisle emerged from the house he heard the volley of shots that ended his father’s life.

Police have since the incident beefed up patrolling in and around the house.

Investigation by Maverick Citizen has revealed that those who wanted to eliminate the top investigator tracked his cellphone 2,116 times between 5 May and 18 September 2020.

However, on Wednesday 16 September Lincoln was in hospital for a minor operation and his phone could not be tracked.

The type of sophisticated equipment needed for the type of tracking the killers used is not cheap and is sure to offer some clue about who would have had the capacity for this type of surveillance of Kinnear.

Kinnear’s professional partner could not handle the tracking and constant death threats and resigned in 2019.

“The tracking of Kinnear’s phone and that of Lincoln shows that the underworld is one step ahead of us, meaning all our lives and those of other detectives investigating high-profile flyers are in imminent danger.”

Pivotal to the investigation is footage from security cameras outside Kinnear’s house which captured the shooting incident and the perpetrators fleeing the scene.

The investigation into Kinnear’s death has meanwhile kicked off in Springs in Ekurhuleni, tracing the steps to the last place Kinnear visited before he was murdered.

Last week, when Kinnear visited Springs, he was investigating the application for gun licences of Cape Town underworld figures not approved by the Northwood police.

This docket is part of a bigger gun racket investigation against alleged underworld boss Nafiz Modack and eight high-ranking police officers accused of colluding with officers at the Central Firearm Registry (CFR) in order to produce firearms licences unlawfully.

One of those dockets contains a Gauteng businessman’s statement made on 18 August 2020, stating:

“From 6 August 2020 I began receiving telephone calls from a Cape Town security boss who confirmed he had received instructions to collect funds from me,” he said.

On the same day, the complainant received a WhatsApp message stating “You can hide, I get you f#kor.”

At 11:10 on 9 August the Gauteng businessmen received a further voice note stating if he failed to make the final payment by Friday 14 August “the wolves would get involved and this thing will get ugly”.

The Daily Maverick investigation further revealed that the threats on Kinnear’s life have been present for almost 10 years, especially since 2018, when he, along with colleague Major General Jeremy Vearey, had investigated a gun racket in Durban.

This investigation had implicated hitmen, the taxi industry and high-profile politicians, but fizzled out when they were removed from the case.

Vearey and Kinnear had eventually focused on the Cape Town underworld war for supremacy in the lucrative drug trade at nightclubs.

Kinnear, in a report made around December 2019 sent to national crime intelligence head Lieutenant-General Peter Jacobs, set out how a “rogue Crime Intelligence unit” had targeted colleagues and had interfered with investigations.

Jacobs had recommended that the rogue unit be dissolved, but it still operates independently. This is one of the most pressing issues that Cele needs to investigate.

It is common cause that Kinnear, Vearey and other colleagues did not get on with the then Western Cape provincial police commissioner Khombinkosi Jula, who left the post in 2019.

In an exclusive interview with Kinnear’s wife, Nicolette, shortly after Cele visited the family, she said:

“I’ve heard his phone was tracked. I haven’t seen any reports yet. It doesn’t take a scientist or an investigator to figure this out because how else would they have known exactly at what time he is going to be at home?

“He didn’t come home the same time every day. Some sort of technology was definitely used to track my husband and they knew exactly the time he stopped in front of the house.”

She also confirmed the threat on her husband’s life had existed for almost seven years, but had only become a reality when two men with a hand grenade were arrested outside his house on 23 November 2019.

Two suspects and later a third were arrested in connection with the attempt to take out Kinnear.

Speaking about their ordeal she said:

“Because nothing was ever done to the previous threats, we knew it was there, but it could have also been a fake thing as well. After 23 November 2019, we realised they were serious in what they intended doing.

“That had changed our mindset, when and how we move around in terms of alertness. When we had the protection we had to move with them. It wasn’t moonlight and roses because you can’t go and shop with the guards and whatever.

“So we had to adjust things, but it brought an immense calmness because we saw there is some form of vigilance and guys outside. Obviously when that was gone it has become our own responsibility.”

She could not elaborate on whether the protection at their house in November 2019 had been approved, but said:

“I don’t know the protocols and what was done that we were given guards. I don’t know whether it was approved and we didn’t get any letter from SAPS.

“Before the hand grenade incident we were already a week under protection. That was after Colonel André Kay was killed on 14 November 2019 outside his Bishop Lavis house. Shortly after that, we were put under protection because of the potential threat. I don’t know why the guards were removed; we just woke one morning and saw no police officer was outside our home.”

Responding to what can be best described as a fatal error of judgment, Cele told the media that the withdrawal of Kinnear’s protection would be investigated.

Cele conceded that things “were not done as they were supposed to” and added that “heads will have to roll”.

“As it stands, at face value, it does look like we have failed the colonel as the police ourselves. We could have done things better and we believe if those things were followed, there are things that are supposed to be done that we’ve not done,” he said.

Cele said the last meeting he had had with Kinnear was on Wednesday 16 September where they had discussed tackling an underworld operation in the Western Cape. He said that now there would be “no turning back. We have to work hard dealing with the underworld”.

A top Gauteng investigator said the minister and police management faced “a mammoth task” to infiltrate or successfully prosecute the underworld.

He said the underworld was controlled by “ruthless figures” in Cape Town who used criminal elements in Gauteng to carry out extortion.

The “money” in all of this was in Gauteng and this was why the crime of extortion was a key issue in dealing with that province. Mark Batchelor, who was murdered in July 2019, extorted money for underworld figures in Cape Town, the source said.

“The problem is further compounded by a huge number of Gauteng police officers colluding with alleged drug and gangster kingpins. Because of my investigations, I have received death threats from alleged kingpins and police officers. Hitmen from Cape Town mostly carry out the killings of policemen in Gauteng. The shots are called from Cape Town.

“The Serbian mafia are also working closely with the underworld. They are highly skilled, trained assassins riding on motorbikes and killing their targets. Their trademark is shooting targets above the nose and the chin,” the source said.

This was the manner in which underworld kingpin Cyril Beeka was shot and killed on 21 March 2011 in Modderdam Road, Bellville.

The irony is that at the time of Beeka’s killing, Serbian fugitive Dobrosav Gavric was his passenger. Gavric survived the assassination and has since been fighting to escape extradition to Serbia.

He fled Serbia in 2007 after the assassination of Zeljko Raznatovic, a military commander known as Arkan during the conflict in the 1990s. He was sentenced to 30 years in absentia and is presently in Helderstroom Correctional Facility pending his extradition case.

The source said that, according to witnesses, the gunmen who shot alleged gang boss Ralph Stanfield in a drive-by attack in Johannesburg in July 2017 also drove a motorbike.

Kinnear’s wife underlined that she didn’t want her husband’s death to become just a statistic.

“What was done, what wasn’t done right for us as a family, is irrelevant because it’s done,” the emotional widow said.

“For me now, my fight is pretty much done and when my husband died, that fight stopped. But he is not the only member; there are so many other members. What I’m fighting for now is for a change, reviews and possibly listening to members, their outcries that ‘I’m in danger’ and that more thought could be put into that process,” she said. MC