State of siege: Zimbabwe puts the boot in journalism and freedom of speech 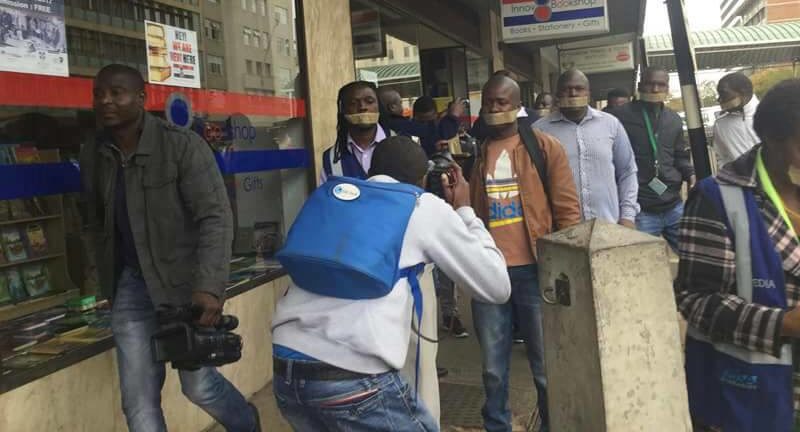 Violent attacks on journalists, student leaders and other voices happening in full view of the police paint a worrying image of the country’s ever-declining humanitarian situation.

“Journalism has been criminalised,” said award-winning journalist Hopewell Chin’ono during one of his court appearances in August before he was granted bail on 2 September.

Chin’ono, who is facing charges of “inciting public violence”, is one of many journalists who are faced with a massive clampdown on the media and other dissenting voices in Zimbabwe.

At least six journalists were physically assaulted on 18 September and their equipment was vandalised by unidentified assailants while they were covering a press conference by Zimbabwe National Students’ Union (Zinasu) president Takudzwa Ngadziore in Harare.

Ngadziore, who is out on ZW$2,000 (R350) bail granted on 14 September, was arrested on 10 September after leading a protest against the alleged abduction by state agents, using an Impala Car Rental vehicle, of journalism student Tawanda Muchehiwa. The student leader led protesters at the Harare-based car rental offices, demanding the company release details of the alleged abductors after CCTV footage revealed the car that was used in the abduction.

As part of his bail conditions, Ngadziore was ordered by the magistrates’ court not to be seen within a 100m radius of Impala Car Rental, but he vowed to address protesters exactly 101m away from the office. As promised, Ngadziore addressed the press conference, but unknown assailants attacked and violently dispersed everyone, including journalists.

One of the journalists who was attacked, Thomas Madhuku, told Daily Maverick that, “We went to Impala Car Rental to cover a press conference by the Zinasu president, and police officers, including plainclothes youths, were milling around when we got there. Ngadziore changed the venue a bit further away from Impala and when we were recording the proceedings, an unmarked vehicle dropped some visibly drunk youths who started assaulting everyone.

“They hit me on my head and took away my phone and I made a police report for theft. After the attack [freelance journalist] James Jemwa had cuts on his face and [journalist] Rumbidzai Chizarura was struggling to walk due to injuries sustained,” said Madhuku.

Journalism student Muchehiwa was abducted outside a police station in Bulawayo, tortured and dumped outside the house of his uncle, online publication Zimlive editor Mduduzi Mathuthu, in August. Mathuthu, who has been in hiding since July, is on the police wanted list after he broke the Drax Covid-19 procurement scandal. Another internationally acclaimed journalist, Hopewell Chin’ono, who also reported on the scandal, was arrested and is currently awaiting trial for allegedly inciting people to commit public violence.

Human Rights Watch Southern Africa director Dewa Mavhinga told Daily Maverick that, “The vicious physical attacks of journalists doing their job and the total failure by police to arrest these attackers clearly shows that the Mnangagwa government was only paying lip service to freedom of expression and of the media.

“Government should protect journalists and reaffirm the position that journalism is not a crime by prosecuting and punishing those who abuse journalists. Zimbabwe is fast gaining a reputation as a state that disregards human rights and the rule of law in ways perhaps worse than seen under the previous administration of Robert Mugabe.”

The director of the Zimbabwe branch of the Media Institute of Southern Africa, Thabani Moyo, said: “We condemn in the strongest terms these acts of barbarism. It’s unheard of that in a constitutional democracy, journalists are assaulted while performing their duties. We call upon the police to fully investigate this matter and apprehend the assailants.

“There’s no way in a country which has a functional constitutional and law enforcement agency that this act can go unpunished, otherwise it sends a signal that journalists can be assaulted and injured with impunity. It’s highly deplorable from where we stand because the practice and craft of journalism is a constitutional prerogative and government through its law enforcement agencies should be seen to be upholding such provisions.”

The attack on journalists comes at a time when there are increasing allegations of a clampdown by authorities on dissenting voices.

Lawyer Chris Mhike, who is representing the affected journalists, said: “Several journalists were met with violence whilst in the course of doing their journalistic work, covering a press conference at Hillside area in Harare. They were physically attacked by unidentified men and women who accosted them using physical force.

“James Jemwa was injured during the assault and he also lost highly valued items like his camera, while Godwin Mangudya’s digital voice recorder was damaged.”

Journalist and freedom of expression activist Reyhana Masters told Daily Maverick: “If relevant government structures like the Ministry of Information, Publicity and Broadcasting and the Zimbabwe Media Commission remain silent and choose not to take action to investigate the attack, it would really be disturbing, because it gives the attackers the strong impression that they have impunity.

“It will show that relevant government institutions are unwilling to act on behalf of all citizens and are being selective about who they represent, meaning that the media becomes even more vulnerable than ever before in this highly contested terrain.”

Ordinary citizens continue to be targeted for freely expressing themselves and are being subjected to persecution through prosecution.

Chin’ono, who is due to be tried on 19 October, is now using his Facebook account to continue speaking against corruption and human rights after he was ordered not to use his Twitter account @daddyhope as part of his bail conditions.

On September 18, Booker Prize nominee and finalist Tsitsi Dangarembga, with 13 other citizens including MDC Alliance spokesperson Fadzayi Mahere, appeared before a Harare magistrate during a routine remand, and they are waiting to stand trial for “participating in a gathering with intent to cause violence and for unnecessary movement during government-enforced national lockdown”.

The group will return to court on 24 September.

Dangarembga’s lawyer, Paidamoyo Saurombe, said, “We are placing the State on notice to challenge the placement on remand and stringent bail conditions to either be removed or at least reduced to once a month as opposed to thrice weekly.”

A security guard, Nhamo Five, also appeared in court on 18 September, after he was arrested for insulting President Emmerson Mnangagwa. The state alleges that the 27-year-old complained that bus fares are now expensive and faulted Mnangagwa for presiding over mismanagement of the economy.

MDC Alliance vice-chairperson Job Sikhala, who is facing charges of inciting public violence ahead of the failed July 31 protests, has been held at Chikurubi Maximum Security Prison since 22 August. Sikhala has vowed to continue the fight for freedom even as he remains incarcerated after his bail appeal failed last week because the magistrate who presided over his initial bail application went on leave without signing the court record.

The violent attacks on journalists, student leaders and other voices happening in full view of the police paint a worrying image of Zimbabwe’s declining humanitarian situation. DM