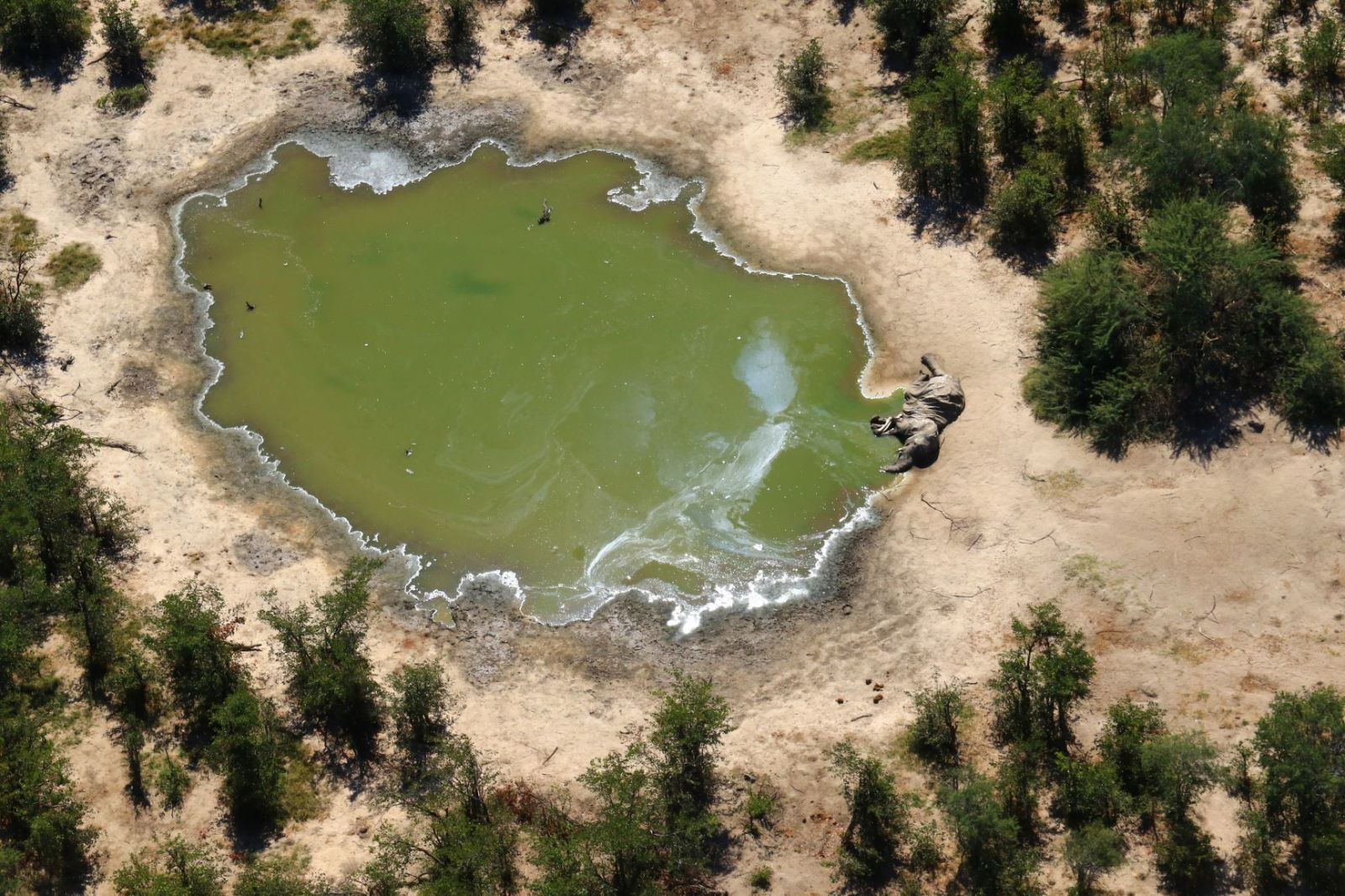 epa08524241 Aerial view of the carcass of one of the approximately 350 elephants that have been found dead for unknown reasons in the Okavango Delta area, near the town of Maun, northern Botswana, 03 July 2020. This unprecedented death toll for the pachyderms does not appear to be related to poaching, as their coveted ivory tusks are still attached to the corpses. Authorities are performing various tests to determine the cause of death. EPA-EFE/STR

GABORONE, Sept 21 (Reuters) - Toxins in water produced by cyanobacteria killed more than 300 elephants in Botswana this year, officials said on Monday, announcing the result of an investigation into the deaths which had baffled and alarmed conservationists.

Cyanobacteria are microscopic organisms common in water and sometimes found in soil. Not all produce toxins but scientists say toxic ones are occurring more frequently as climate change drives up global temperatures.

Cyril Taolo, deputy director of the Department of Wildlife and National Parks, told a news conference the number of dead elephants had risen to 330, from 281 reported in July.

The department’s principal veterinary officer Mmadi Reuben told the news conference: “Our latest tests have detected cyanobacterial neurotoxins to be the cause of deaths. These are bacteria found in water.

“However we have many questions still to be answered such as why the elephants only and why that area only? We have a number of hypotheses we are investigating.”

Other animals in the Okavango Panhandle region appeared unharmed.

Some cyanobacterial blooms can harm people and animals and scientists are concerned about their potential impact as climate change leads to warmer water temperatures, which many cyanobacteria prefer.

Southern Africa’s temperatures are rising at twice the global average, according to the Intergovernmental Panel on Climate Change.

“It amounts to having the right conditions, in the right time, in the right place and these species will proliferate,” Patricia Glibert, a professor at the University of Maryland Center for Environmental Science, who has studied cyanobacteria, told Reuters.

“These conditions are coming together more often, in more places, so we are seeing more of these toxic blooms around the world.”

In neighbouring Zimbabwe, about 25 elephant carcasses were found near the country’s biggest game park and authorities suspect they succumbed to a bacterial infection.

The animals were found with tusks intact, ruling out poaching and deliberate poisoning. Parks authorities believe the elephants could have ingested the bacteria while searching for food. The carcasses were found near water sources.

“We considered the possibility of cyanobacteria but we have no evidence that this is the case here (in Zimbabwe),” said Chris Foggin, a veterinarian at the Victoria Falls Wildlife Trust, which tested samples from dead elephants from Zimbabwe and Botswana.

Zimbabwe has sent samples to Britain and is waiting for permits to send samples to two other countries, Foggin said.

Africa’s overall elephant population is declining due to poaching but Botswana, home to almost a third of the continent’s elephants, has seen numbers grow to around 130,000. (Additional reporting by Alexander Winning in Johannesburg; Writing by MacDonald Dzirutwe in Harare; Editing by Raissa Kasolowsky and Janet Lawrence)