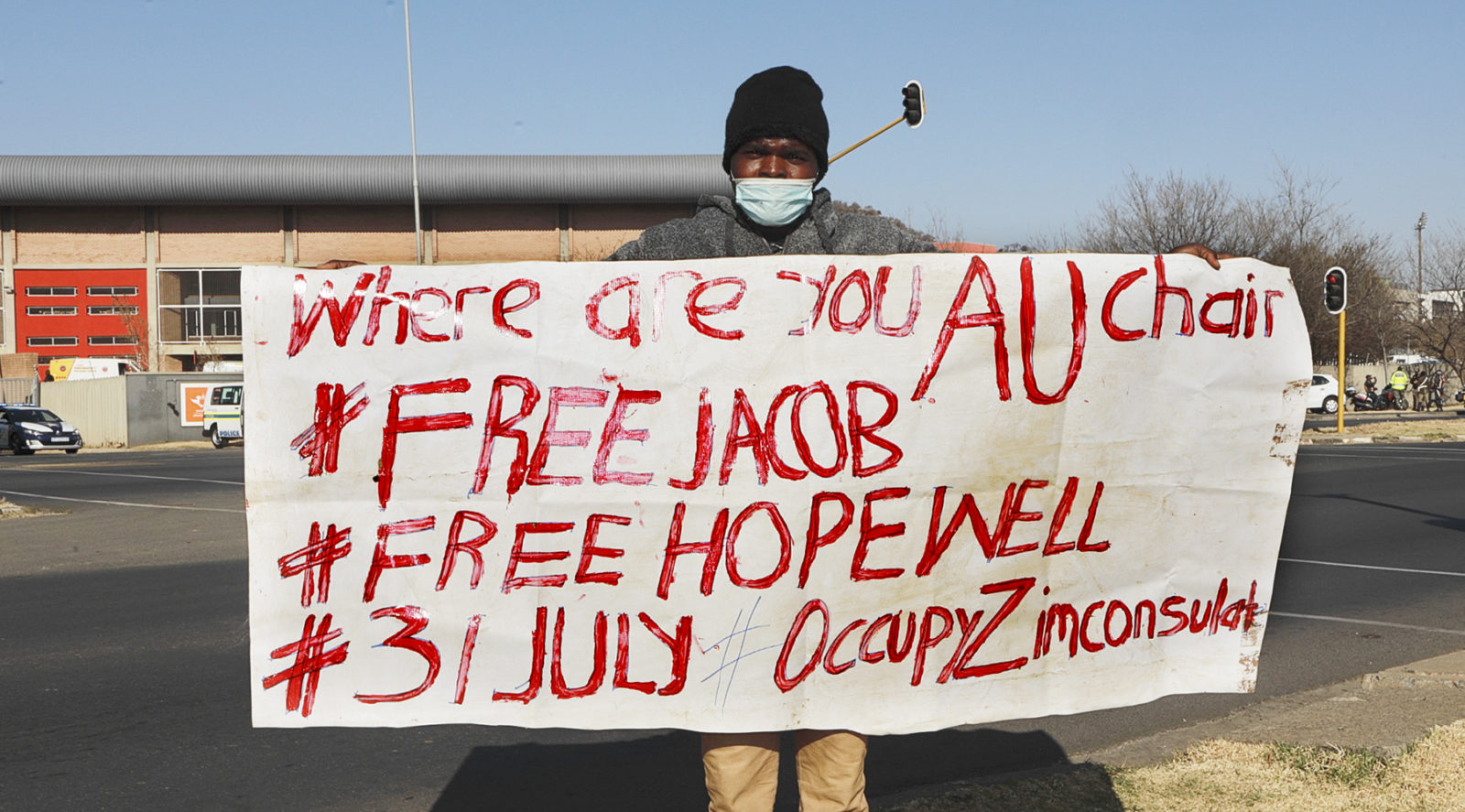 A Zimbabwean national, Hlevani Matikiti protests across the entrance to University of Johannesburg at the funeral of the Late Andrew Mlangeni against the arrest of Zimbabwean journalists on July 29, 2020 in Soweto, South Africa. Photo by Gallo Images/Fani Mahuntsi)

The latest incident of the abduction and torture of the filmmaker is one more example of the war the Zanu-PF government is waging against the citizens of the country it is supposed to be serving.

On 20 July 2020 a group of armed law enforcement officials broke into the home of award-winning Zimbabwean journalist and filmmaker Hopewell Chin’ono, and abducted him.

Chin’ono managed to capture the first few seconds of his abduction on video.

In the video, there’s a knock on the door to the room in which Chin’ono seems to be waiting, ready for his assailants, armed with his phone camera. When the door opens, a man aggressively shouts an order at Chin’ono to put down his phone. Another man visibly quickly steps back, clearly trying to get out of view of the camera, but not quickly enough. Chin’ono delays putting down the phone and they again yell at him: “Put it down!” He finally complies and for a while that was the last we saw of him as a free man.

When his lawyer, Beatrice Mtetwa, got to his house, she was confronted by the evidence of the break-in and posted a video showing a broken glass door through which the abductors allegedly gained entrance.

After his abduction, Chin’ono was taken to a local police station and charged with trumped-up accusations of inciting violence for planned 31 July protests against corruption. Jacob Ngarivhume, the opposition leader who called for the protests, was also arrested.

Zimbabweans have no doubt whatsoever that Chin’ono is being persecuted for having been among the journalists who exposed looting of Covid-19 funds, scuppering a $60-million deal that would allegedly have benefited, among others, President Emmerson Mnangagwa and his sons. Because of the exposé, the procurement deal was cancelled and the minister of health fired, a move many wrote off as apparent scapegoating.

At some point during Chin’ono’s incarceration, George Charamba, the president’s spokesman, posted this on his Twitter page:

“Al Jazeera’s Hussein detained in Egyptian prison for 1,000 days … One Egyptian journalist working for Al Jazeera has been languishing in jail for over 1,000 days. Meanwhile even Al Jazeera’s perfunctory campaign for him has grown fatigued. The West is dead silent, and won’t care a hoot. But the message has been driven home: you do not tamper with Egyptian institutions of State in the name of MEDIA FREEDOM or that of GLOBAL NEWS NETWORKS hoping IT CAN’T!!…”

We took it as a threat that Chin’ono and Ngarivhume were, like the Egyptian journalist, also going to be kept in prison for a long time, and indeed they were.

Chin’ono and Ngarivhume were remanded in custody for a crime they did not commit. They were incarcerated at Chikurubi Prison where they experienced abuse at the hands of prison officials, who at some point denied them access to basic prisoners’ rights such as food from visitors, warm clothing and private consultations with lawyers.

Prison officials told Chin’ono and his lawyers that they had been instructed to never leave his side and to sit in on all his consultations with his lawyers. When they fought against this, Ngoni Nduna, the magistrate tasked with Chin’ono’s hearing, accused Mtetwa of posting details about the case on Facebook and demanded she be removed from the case.

This despite the fact that the Facebook page he cited was a Beatrice Mtetwa fan page, run by a fan who confessed to registering and running it. The courts went on to ban Mtetwa from representing Chin’ono – a move clearly meant to frustrate him, delay his bail hearing and deny him the right to a lawyer of his choice.

After a month and a half of incarceration, Ngarivhume and Chin’ono were finally granted bail with stringent conditions. They are not to leave Harare and were banned from Twitter.

A lot about Chin’ono’s and Ngarivhume’s cases feels like déja vu. It is eerily similar to Jestina Mukoko’s ordeal at the hands of the same perpetrators more than 12 years ago.

The way they broke into Chin’ono’s home and abducted him without an arrest warrant speaks to the probability that he was a candidate for enforced disappearance, the regime’s favourite way of dealing with dissenters. I believe that had Chin’ono not managed to make a live recording of his abduction, the state would have denied taking him.

On 3 December 2008, 15 armed men broke into the Norton home of Mukoko, the director of the Zimbabwe Peace Project (ZPP), a journalist and human rights defender. After news of her arrest got out, the government denied taking her. She was detained incommunicado until 24 December 2008, when she was produced at Harare Magistrate’s Court.

During her enforced disappearance Mukoko had been subjected to inhumane treatment including but not limited to being locked in a freezer, simulated drowning and beatings.

Instead of freeing Mukoko after producing her, for she had broken not even a single Zimbabwean law, the government remanded her in custody on trumped-up charges of “recruiting persons for training as insurgents or saboteurs”.

They eventually released her on bail in March 2009, after she had spent three months in custody. Her bail conditions were that she had to report at the local police station in Norton every Friday. She also had to surrender her passport. This went on until September 2009 when the Supreme Court ordered a permanent stay of the criminal proceedings against Mukoko.

Nobody was ever held personally responsible and punished for her abduction, enforced disappearance, torture, wrongful arrest and many other crimes committed against her and the 23 activists she says she was tortured with. However, in 2018 the High Court of Zimbabwe ordered the state to pay $150,000 in compensation for the abduction, enforced disappearance and torture she was subjected to by state security agents.

Just like Chin’ono, while in custody, Mukoko was denied adequate health care, reportedly going for at least 10 days without her allergy medication, and was at some point prescribed anxiety and insomnia medication by an army doctor who had, ironically, also taken part in her torture.

The government of Zimbabwe has been committing violent crimes against citizens from as long ago as 1980, when it waged war on the opposition, Zapu, and went on to kill more than 20,000 civilians in Matabeleland and Midlands provinces, the Zapu stronghold. The operation was called Gukurahundi and many people were abducted, disappeared and tortured.

We all thought things would change now that former president Robert Mugabe has gone, but evidence shows that instead, government is escalating its violence.

For four decades, the Zanu-PF government has denied abducting civilians. It has always been a case of the victims’ word against the government.

In May this year, three women from the main opposition party, the MDC Alliance, were arrested at a police roadblock and taken to Harare Central Police Station, from where they were abducted and disappeared for days. Cecilia Chimbiri, Joana Mamombe and Netsai Marova were dumped outside Harare a few days later, having been physically and psychologically tortured. Police denied ever arresting them, despite the fact that on the day of their arrest, police spokesperson Paul Nyathi admitted to two newspapers that indeed they had arrested the three women.

They instead rearrested them at the hospital where they were being treated for torture, and charged them with faking abduction. Like Mukoko, they were eventually granted bail, but with punitively strict conditions. Among their bail conditions were orders to report three times a week at Harare Central Police Station, surrender their passports to court authorities and not to interfere with witnesses. They were ordered to continue staying at the addresses given to law enforcement agents upon their arrest and barred from communicating with the media on anything to do with the alleged offence. They were also banned from social media.

The government, on the other hand, continues to abuse the three on social media and state-controlled media, accusing them of having faked their abduction. The women have no way of defending themselves as they were banned from commenting on the case. Last week, the government aired clearly doctored footage of what they claimed was evidence that the three women were out and about during the time of their abduction.

In what many Zimbabweans have dismissed as a shoddy propaganda job, the government’s footage shows a car they claim is the Mercedes Benz the victims had been in. However, close inspection of the car in the video shows that it is a BMW. The footage also shows a Mercedes-Benz with its fuel tank on the left side, but later shows “the same car” with the tank on the right side. This has Zimbabweans convinced that the fact that the government had to go to such great lengths to doctor footage and air it on national TV instead of producing it in court as the trial is ongoing, is clear evidence that they have no case against the three women.

For four decades, the Zanu-PF government has denied abducting civilians. It has always been a case of the victims’ word against the government.

But for the first time in 40 years, the government was caught on camera, abducting my book research assistant, 22-year-old journalism student and activist Tawanda Muchehiwa. I will write more about this in an upcoming article.

In all these cases, the collusion to obstruct justice between government institutions in the persecution of the opposition, human rights defenders and dissenters is glaring. In all the cases, armed forces abduct victims on behalf of government and either disappear and torture them first before dumping them at police stations, or victims are arrested by police and abducted from police custody by agents who go on to disappear and torture them. Those that survive being disappeared are tortured while in the custody of prison officials. All of them are then denied bail for a while and eventually granted bail, but with unreasonable conditions. After some months, the cases are thrown out of court.

This shows beyond reasonable doubt the extent to which the state is captured. The Central Intelligence Organisation, the judiciary, the department of prisons, the army and the police have been completely captured by Zanu-PF. Instead of serving and protecting the people of Zimbabwe, they are being used to oppress us. DM/MC

Collaborate to communicate in a crisis: How clinicians, scientists and journalists pulled together to spread good science