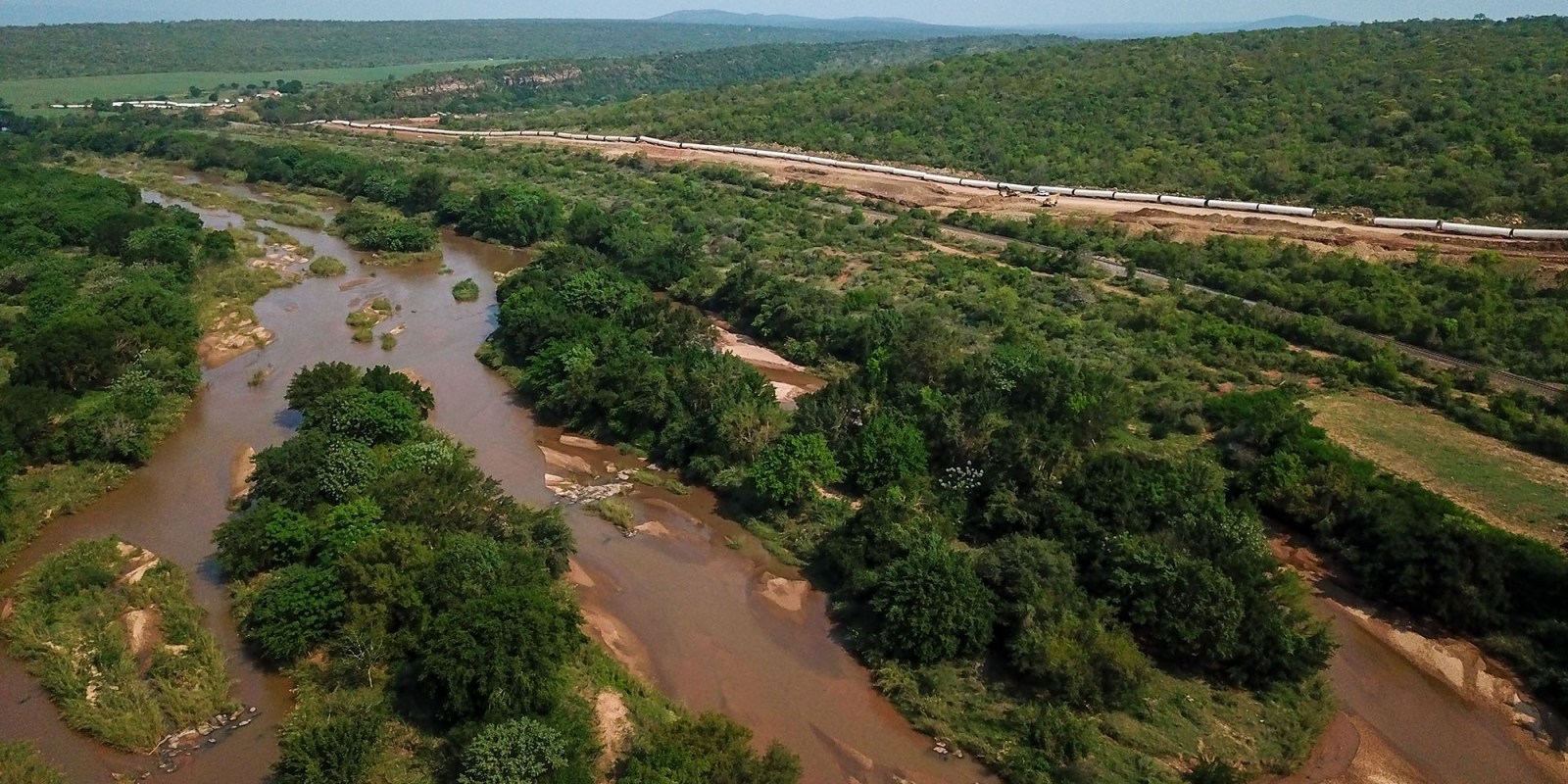 Part of the Great Usutu River which runs through Eswatini. (Photo: Flickr/AfDB Projects)

A high-profile community-owned ecotourism project conceived in a rural part of Eswatini bombed before it could take off in 2016 as funding dried up. While the government intends launching a fact-finding mission to find out what went wrong and to revive the project, the Inhlase Centre for Investigative Journalism has been told that it was symptomatic of Eswatini’s economic crisis and investors’ reluctance to put their money into the country’s rural areas, with their chieftancy disputes, tenure insecurity and land battles.

The Eswatini National Trust Commission splashed a cool R1.2-million of public and donor funding on a community-owned ecotourism project that never got off the ground, the Inhlase Centre for Investigative Journalism can reveal.

The Mambane conservation and community tourism project was part of the Lubombo Transfrontier Conservation Area (TFCA), linked to reserves in South Africa and Mozambique. Located in an area of pristine natural beauty close to the intersection of the three national borders, it was earmarked as an environmental treasure trove and gateway for tourists, with abundant birdlife and unique vegetation. The park area overlooked the 8km Usuthu Gorge and was bordered by the Great Usuthu River in the south, where it cuts across the Lubombo mountain range as it exits Eswatini.

It is linked to Mozambique’s Maputo Special Reserve and the Usuthu Gorge Nature Reserve in KwaZulu-Natal.

The Inhlase Centre for Investigative Journalism was told that the collapse of the project before it took off was symptomatic of Eswatini’s deepening economic crisis and investors’ growing reluctance to put their money into the country’s rural areas, with their chieftaincy disputes, tenure insecurity and land battles.

Local traditional leaders also blamed top-down decision-making. Poor planning, particularly in regard to the financing of the project and the location of infrastructure, were also cited.

The project had its roots in a TFCA protocol signed in 2000 by the tourism ministers of the three countries to work together in promoting conservation and ecotourism along the Lubombo Tourism Route.

“It aimed to bring socioeconomic benefits to the rural communities while maintaining the sustainability of the ecotourism sector by protecting the environment and local culture,” explained the trust commission’s programme manager, Seth Maphalala.

The commission falls under Eswatini’s ministry of tourism and environmental affairs.

In addition, the ministers agreed to donate surplus wildlife to each other’s reserves in transboundary areas instead of culling them.

In 2011, the Eswatini Trust Commission took the first step by investing €800,000 in the construction of a sizeable tourism centre in the park with catering facilities, called The Mambane Coffee Shop.

The coffee shop was handed over to the local community by former tourism minister Macford Sibandze in early 2012, with the idea that the community would generate revenue from ecotourism to build residential units.

When this did not happen, the commission approached the Dutch government, which donated €20,000 (about R387,000 at current values) for the construction of a tent camp to accommodate tourists, an information centre and an ablution facility.

Stationed near the nearest remaining homestead in the area, this was intended to expose visitors to the rural Swazi lifestyle.

The high-profile project drew the interest of the Swazi elite. In addition to Sibandze’s appearance, the Queen Mother, Ntombi Tfwala, visited the project and said she was impressed by the TFCA’s objective of promoting conservation and community-based tourism.

A board of trustees was elected by local residents to oversee the running of the scheme. Given the opportunities for hiking, mountain biking, 4×4 touring, rafting and canoeing, two local women were trained in ecotourism and a local man in conservation.

However, the funding dried up in 2016. The Dutch-funded centre was not completed, with no tents being provided and the information centre block still without a roof.

It remains unclear what R387,000 granted by the Dutch was used for.

In addition, the commission could not find the means to fence the 9 000ha reserve, meaning that game could not be transferred from the other reserves, while the road network was rudimentary and impassable in conventional two-wheel drive vehicles.

There was also strong criticism of the location of the coffee shop, which was 15km from the nearest homestead.

As a result, the original concept of recruiting security guards, game rangers, tour guides, cooks and other staff from the surrounding homesteads, and sourcing produce from local farmers, never took off.

The park was never officially opened to the public. Mambane MP Phila Buthelezi blamed the commission for not marketing the coffee shop effectively as a tourist destination.

He also complained about the failure to hire a private company to run it to allow the locals to learn how to manage a business.

“Another challenge was the bad terrain, and nothing was put in place to attract the tourists to the coffee shop. There was no wildlife, although this was mooted before the construction.

“As result, it became a safe haven for criminals before it was ruined,” Buthelezi said.

Maphalala also attributed the project’s failure to the ministry’s decision to locate it 15km from the community’s homesteads. He accused the former principal secretary of tourism, Lucy Dlamini, of imposing the decision against technical advice.

“The rural community lacked funds to run the scheme from day one. It found it impossible to pay workers, including security guards, and buy food supplies,” he said.

But the failure of the scheme is also seen as a reflection on Eswatini’s economic decline and land-related rural instability.

Maphalala told Inhlase that the establishment of the reserve coincided with the country’s 2012 economic meltdown. He said the commission, which operates on a government shoestring, was unable to help the community kickstart the venture by building further residential units.

He also said that potential investors had been shaken by former prime minister Barnabas Dlamini’s notorious public statement back in November 2002 declaring that the government would not bow to a court order reinstating two chiefs and their followers forced out of rural Macetjeni and KaMkhweli to make way for a brother of King Mswati.

Since then, investors had been fearful of putting their money into a country seen as having little respect for the rule of law. He recalled that at a subsequent investor conference in Mozambique, no one had shown an interest in Eswatini.

“Investors did not come to the Eswatini Investment Promotion Authority information desk to enquire about opportunities. But they were falling over each other at the Mozambican desk over having a stake in the Maputo Special Reserve,” he said.

Mambane chief Mvimbi Matse blamed the collapse on the sidelining of the traditional authority in the area.

Matse criticised the ministry for failing to consult surrounding communities and situating the centre far from their homesteads. He also lashed out at the commission for allowing the “wrong people” on the board of trustees, saying they were uneducated and self-serving.

“Traditional leaders have to play a leading role in the development of their chiefdoms. I only got involved after the first board had messed things up,” he said. He did not give details.

The chief said a further setback was the death of board chairperson Musa Shandu, a retired businessman whose experience was sorely needed. Shandu’s death is said to have triggered a power struggle among trustees seeking to use the ecotourism venture to advance their prospects in the 2013 Tinkundla elections.

Mambane is said to have been divided by conflict over the chieftaincy before the project was launched. This was confirmed by Mambane resident Duduzile Myeni, who complained that there was infighting among the traditional authorities and that ordinary residents were often caught in the middle.

Maphalala said that land disputes caused by the questionable legitimacy of new chiefs and chiefdom boundary disputes were hindering development in rural areas.

He added that because land disputes affected project implementation time frames, the commission found it difficult to raise grant funding.

After a recent visit to the site, the current minister of tourism and environmental affairs, Moses Vilakati, said plans were under way to revive the project as part of the ministry’s community tourism development programme.

Vilakati said he had launched a fact-finding mission to establish why the Mambane venture collapsed.

“We need more world-class tourism establishments. When we market the country to tourists, they want to see what we are offering them,” he said. DM

by Vuyisile Hlatshwayo for the Inhlase Centre for Investigative Journalism, Daily Maverick
September 20, 2020