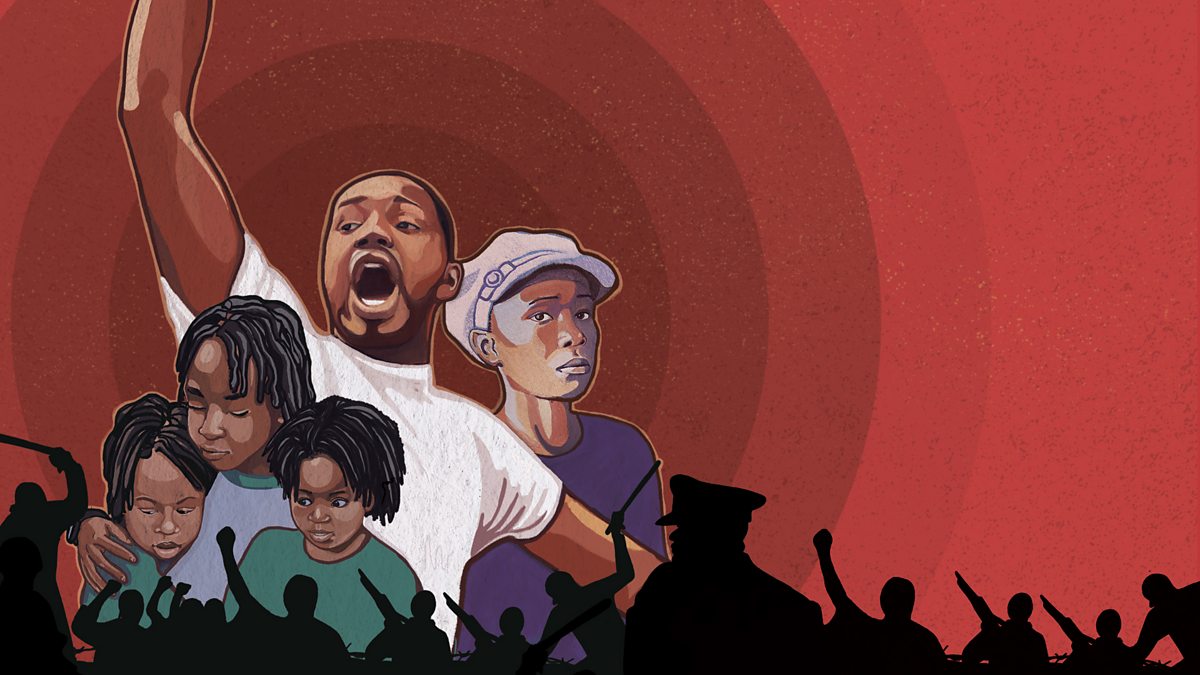 Softie is a documentary showing at the Durban International Film Festival which frames the grand setting of Kenya’s nationwide struggle against decades of state capture and tribalism through the lense of an activist’s deteriorating family life.

Boniface “Softie” Mwangi, father of three, opens a baby bottle with his teeth while mumbling affirmative grunts to a fellow recusant planning a banned protest with the certainty of police brutality.

“I think it’s good for us to get arrested so that people can know that this government is intolerant.”

He gets up to leave.

“Where are you going, dad?” asks his adorable eldest boy.

Without looking back, Boniface responds with a wry, “I’m going to topple the government”.

This quintessential scene captures the essence of the film. Softie follows Boniface’s family throughout his ambitious campaign for office in a regional Kenyan election in the context of Kenyan politics. The concurrent exploration of Kenya’s political history and the family’s experience compels the audience to become invested on both the macro and micro-scale.

Boniface was a timid child with a tender heart. His gentleness was deemed a weakness by his peers and he became known as “Softie”. The nickname is so ill-suited to the man he grew into that it sticks with indignant irony. Boniface is a fearless activist, famous for his shocking photographs of election violence in Kenya.

As a young photojournalist he became disillusioned with the apathy of his colleagues, who would sit in the office having coffee with scarcely a care in the world, while he was out in the streets photographing police thugs assaulting civilians with machetes. Thus began his gruelling, relentless swim against the crushing tide of tyranny, violence, and worst of all, indifference.

In 2009, he began a tour, publically exhibiting his photos of post-election violence and was twice awarded CNN photographer of the year, but international attention wasn’t enough for him – he wanted to mobilise Kenyans, so he went back to the streets. This is where we come in.

Softie begins with protest, pigs and a thousand liters of blood. The pigs flood the streets outside of parliament; the word MPigs drips from their bellies, painted in sick red – a dig at the corrupt MPs who enable horrific police brutality. True to form, the police prove this point by dispersing the protest with excessive force.

Police violence against civilians is a huge problem in Kenya, but an equally concerning one is civilian-on-civilian violence. The Kenyan people are tortured by ghosts of tribalism. When the British invaded Kenya in the late 1800s, they divided its people tribally and pitted them against one another – the classic “divide and rule” strategy. Each tribe was used for a different kind of labour and had unique racial stereotypes imposed upon them. This draconian tactic is terribly efficient, so when Kenya gained independence in the sixties, rather than transcend its racist tribal narratives, Kenyatta, the first Kenyan president, declared one tribe as supreme.

“For Kenyans, your tribe betrays you.  What that means is when they meet you and ask, ‘what’s your name’ … they want to get your last name, so that they know how to place you tribally. The identity of this country is tribe. Your last name defines you.”

Since its independence, Kenyan politics has been a fight between the descendants of the first president and vice president – two corrupt militarised monarchies, veiled as democratic parties. Boniface’s dream is to overcome this oppressive machine.

Boniface breaks the news to his wife Njeri that he is running for MP with an on-camera joke. It does not go down well and he is immediately in the dog box. Njeri perfectly epitomises the cliche that behind every strong man is a strong woman: Softie is as much about Njeri as it is about her husband, the burden of his career falling equally on her shoulders despite her not having a choice.

Njeri compares Boniface’s decision to run for office to jumping into a river of crocodiles. He is willing to be eaten by the crocodiles if his martyrdom will turn the tide on the political situation, but his sacrifice affects his family too. One of the big questions left unanswered by the film is: at what point do we abandon a just cause for the sake of those we love?

When Boniface returns home battered by police, his young son prays for his daddy to get a better job so the police will stop hurting him. Daddy smiles but does not relent. “The revolution comes first,” he says, “then love follows”. When the death threats begin to be aimed at the kids as well, the family starts coming apart at the seams …

Softie doesn’t pull punches – it’s not an uplifting movie. What makes it noteworthy is that despite its harsh honesty it is not an exhausting watch. The tight energised editing, which won it a Sundance award, aided occasionally by funky animated graphics, imbues it with dynamism; as does its groovy Kenyan score, which is both fun and tragically juxtaposed with the severity of the political turmoil which is the subject of the film.

A documentary which resists the temptation to fabricate optimism, conveying hard truths without exhausting its audience is a powerful tool indeed. Director Sam Soko does not shy away from the depth of Kenya’s corruption.

When Boniface asks the old lady at the till of his local corner store if she will vote for him, she requests money. When he says he does not have any, she is confused, why would she vote for him for free? That is how deep-seated the corruption is.

Boniface’s lack of money is a huge challenge to his popularity. His attempt to run on principles in a major constituency in Kenya seems utterly futile. Every interaction he has with the public is more disheartening than the last.

The ignorance and desperation of the Kenyans he meets on the streets blinds them to their plight. They are so used to politicians making unkept promises that they have come to believe that the only way politicians serve them is through pre-election bribery. Election days are warzones – desperate voters seeking bribes stampede the voting stations and clash with armed police.

What ensued after the election is even more disturbing – civil violence incited by greedy kleptocrats and dangerous misinformation. Since the dissolution of Cambridge Analytica, it has become clear that Kenya is one of the countries that suffered most as a result of their lies and manipulation (it seems British opportunists weren’t quite satisfied with 67 years of colonialism). As a country still picking apart the web of State Capture, South Africans must surely stand in solidarity with the brutalised people of Kenya.

Softie frames the grand setting of a nation-wide struggle against decades of state capture through the lense of one man’s family life. Strong directing, tight editing and the occasional injection of humour lets it tackle hard truths about populism and self-sacrifice without wearing out its audience. DM/ ML

Softie is available for free viewing on the Durban International Film Festival website. You can contact This Weekend We’re Watching via [email protected]