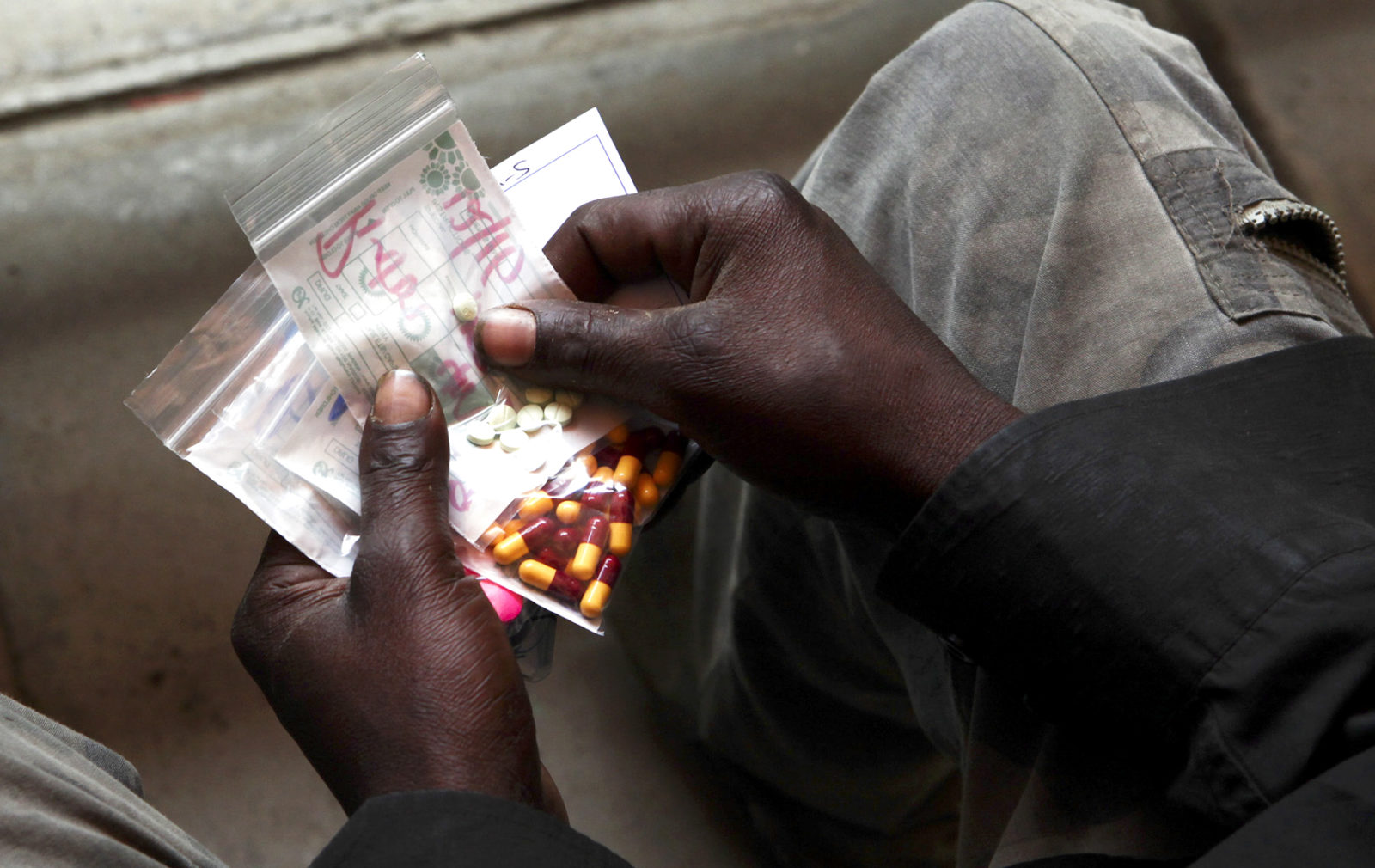 How to support people in completing antibiotic treatment courses for TB has turned out to be a vexing question. (Photo: EPA / Daniel Irungu)

Some tuberculosis patients in South Africa are still required to take their pills in front of a healthcare worker or family member. Is this a justified means of ensuring people take their medicine or is it an invasion of personal autonomy? Local TB experts share their opinions.

Completing the six months of treatment for standard drug-susceptible tuberculosis (DS-TB) can be hard. Apart from side effects associated with the medicines, people may feel better after a month or two and be tempted to stop taking the treatment. Maintaining treatment adherence is even harder for drug-resistant TB (DR-TB) since the medicines have more serious side effects and treatment can last as long as two years.

How to support people in completing these antibiotic treatment courses has turned out to be a vexing question.

But keeping people, especially those who feel well, in hospital only to ensure they complete their treatment seems neither justifiable nor viable. The World Health Organisation estimates that about 301,000 people fell ill with TB in South Africa in 2018.

Nowadays, according to Mugoni, patients with DS-TB are seldom admitted to hospital. Patients with DR-TB, however, may still be admitted.

One of the more controversial responses to the problem of poor adherence to TB treatment has been the WHO’s recommendation that someone should watch and verify that patients take their treatment every day. Such directly observed treatment (DOT) forms part of a wider WHO-endorsed strategy called DOTS (Directly Observed Treatment Short Course) of which DOT is only one element.

Through DOTS, Mugoni says, healthcare workers or family members of TB patients “observe” while the patients take their medication. The time the medication is taken, and any side effects are recorded by the observer.

This often means patients have to travel to clinics every day to take their medication under observation – something that TB patients and TB survivors such as Goodman Makanda, (an XDR TB survivor) say can be undignified.

Makanda was first diagnosed in 2013 and finished his treatment in 2017.

He says he did not get enough information and support with the medication and side effects and that he had to educate himself. Makanda now says it is important that things change in the country’s approach and that TB is treated like other diseases, where patients are diagnosed, educated, given their medication and allowed to self-administer.

One of the traditional arguments in favour of DOT is that, even if it impinges on the autonomy of people like Makanda, it might nevertheless be worth it if it leads to better outcomes.

Compelling evidence, however, suggests it does not.

The authors of a 2015 Cochrane Review concluded that “from the existing trials, DOT did not provide a solution to poor adherence in TB treatment. Given the large resource and cost implications of DOT, policymakers might want to reconsider strategies that depend on direct observation”. A 2013 meta-analysis published in the journal Clinical Infectious Diseases similarly found that DOT did not lead to improved TB outcomes.

While the use of DOT in South Africa is limited these days, it nevertheless remains part of government policy.

In 2016 the Department of Health released Adherence guidelines for HIV, TB and NCDs that contain detailed standard operating procedures that outline a minimum package of interventions to support linkage to care, adherence and retention in care. The document lists DOT as an additional intervention for “specific populations”.

That DOTS remains at least one part of South Africa’s TB response is also clear from a 2020 Department of Health guideline on the management of drug-resistant TB which states that one condition for patients being treated on an outpatient basis is that they should be “willing and able to attend clinic regularly for clinical review and monitoring, and to receive treatment under directly observed therapy with the option of self-administered therapy later in the treatment journey according to locally accepted policies”.

Responding to questions from Spotlight, the National Department of Health explains that DOT is still used but only for specific groups of people like children, the elderly and others at risk for having their treatment interrupted. Other TB patients, according to the department, are on “self-medication with adherence monitoring and counselling conducted during the follow-up visits”.

The current approach to TB treatment adherence includes community health workers, who form part of Ward Based Outreach Teams (WBOTs), that provides “treatment support, adherence counselling and education to patients at home”. The department says there are no plans to change the current approach, but it is exploring the option of using mobile health technology to improve treatment adherence.

“TB medicines will also be delivered to patients as part of the CCMDD (government’s Central Chronic Medicine Dispensing and Distribution system) programme to collection points convenient to the patient. This will be done together with other chronic medicines the patient might be on,” the department says. Including TB medicines in the CCMDD programme is a new development. The department also said that for patients living near health facilities who prefer to collect medicines, there is the option of fast-track collection at clinics.

Whether the continued use of DOT in South Africa is justified, even if only in some specific cases, is a point of contention.

“The field of TB is quite backwards compared to a lot of global infectious diseases,” she says. “And this whole idea of DOTS… It’s fundamentally flawed in my opinion because it’s based on a mistrust between the provider and the people living with the disease.”

But Dr Lucy Connell, the TB Programme Lead at the NGO Right to Care, argues that if DOTS is used correctly, it will “include warm, non-judgemental communication that builds trust, imparts lucid information and promotes hope and self-efficacy”.

She says it can be effective for selected outpatients, but is not ideal for all TB patients and can be unaffordable for both patients and government.

According to Furin, DOTS cannot address non-adherence to TB treatment, because it does not address the reasons patients interrupt their treatment.

She says sometimes the reasons for a patient’s non-adherence to treatment are subtle and can point to issues with substance abuse or losing a family member. That said, in her experience, the reasons are almost always due to the shortage of food or money, transport difficulties and side effects from the medicines.

“For some patients, low adherence or non-adherence to treatment can be the result of not having food or taxi fare to go to the hospital or clinic. Patients can’t take treatment on an empty stomach and given the choice between paying for a taxi to go and fetch TB medicines or buying food, most patients will choose food,” says Mugoni.

Professor Keymanthri Moodley, Director of the Centre for Medical Ethics and Law at Stellenbosch University, explains that TB is seen as a public health emergency, so an approach that limits individual privilege can be justified if it meets the necessary legal requirements.

“In a public health emergency, personal privilege ends where public peril begins. A limitation on autonomy is justified, provided it is strictly necessary [and] in keeping with the law,” she says.

Moodley says the Siracusa principles, which were proposed by the United Nations Commission on Human Rights in 1984, state that public health may be used as a “ground for limiting certain rights in order to allow a State to take measures dealing with a serious threat to the health of the population or individual members of the population”.

DOTS, according to Moodley, meets the criteria.

“Using DOTS is in keeping with a public health ethics approach where public interest is critical and autonomy may be limited in keeping with the Siracusa Principles and the limitation clause of the Bill of Rights in the South African Constitution,” says Moodley.

But for Furin, a better approach to ensure patients adhere to TB treatment is to address the reasons patients struggle to stay on treatment, and being more flexible on when patients can take their treatment.

She provides the example of check-ins to check if patients are taking their medicine and providing them with the support they need.

Furin suggests that TB should have an approach similar to the differentiated model of care for HIV. Differentiated HIV care allows for people living with HIV to be treated differently according to their needs with, for example, people who are virally suppressed and stable on treatment having to visit clinics less often.

“I think for TB, adapting and having different models of care… and addressing the psycho-social and socio-economic needs of patients, is key to improving adherence to therapy,” she says.

According to Mugoni, justifying the continued use of DOT is challenging considering that many TB patients also have HIV, which has a markedly different approach to treatment adherence. There is, for example, no requirement for any people living with HIV to be observed when taking their treatment.

While the agency of HIV patients is acknowledged and respected, Mugoni suggests it is disregarded in TB treatment. For her, this points to “deficiencies in the patient-centred management of TB when compared to HIV”. DM/MC