Money matters for retirees, with Bruce Cameron and Wout... 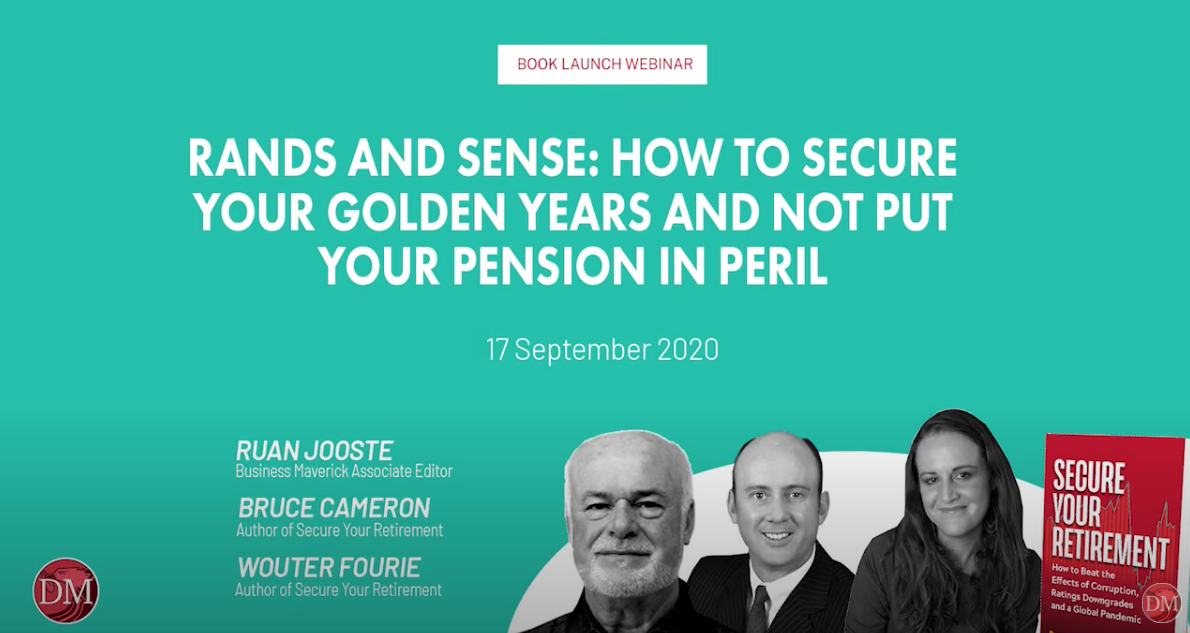 South Africans are notorious non-savers and are ill-prepared for retirement when it comes. All is not lost, say financial planning experts Bruce Cameron and Wouter Fourie. They shared their thoughts with Business Maverick associate editor Ruan Jooste in a recent webinar.

Pensioners around the world have been affected in one way or another by the consequences of Covid-19, but in South Africa, the situation for retirees is far worse, for several reasons.

For one, nine years of ANC misrule under former president Jacob Zuma, which saw corruption become endemic and service delivery collapse, has resulted in stagnating economic growth over the past five years. This performance was reflected on the JSE, which has delivered poor returns for half a decade or more, with dire results for savers.

But the real damage happened before Covid and before the Zuma years, and was caused by pensioners themselves — either because they did not save enough, or they invested in poorly performing pension products or made high-risk investments.

Recent research published by Alexander Forbes suggests that 85% of pensioners have not saved enough for retirement, and the average replacement ratio of a pension is only about 20%. A replacement ratio is the percentage by which your retirement income will replace your final pay cheque, representing your net pay, without any other benefits.

The anxiety this brings was exacerbated by Covid-19, prompting seasoned personal finance journalist Bruce Cameron and financial planner Wouter Fourie to write a book titled Secure Your Retirement: How to Beat the Effects of Corruption, Ratings Downgrades and a Global Pandemic.

They joined Business Maverick journalist Ruan Jooste on a recent webinar to discuss the challenges facing retirees and their options.

The first and most important message is, don’t panic if you find yourself in a position where you are likely to outlast your savings.

“When you panic you make irrational decisions,” says Fourie. Instead, look at the big picture and assess your needs and marry this with what you have. Assess your investments — are they adequately diversified? Are they too risky or too conservative? And consider investing in the skills of a financial adviser.

Cameron, who retired seven years ago, motivated retirees to continue working beyond retirement age if that is an option.

Incredibly, since retirement, the value of his pension has increased by about a third, which is a healthy situation to be in.

“I invested overseas, I have kept my drawdown on my living annuity to below 4%, and I don’t go for high-risk investments – I go for boring things like tracker funds,” he says.

The bottom line is that he planned very carefully for retirement.

While personal finance experts always bang on about the importance of saving from day one of your working life, the most crucial decision-making comes at the point of retirement.

“On the day of your retirement, you become rich for the first time with defined contribution funds — which allow you to take one-third of your savings in a cash lump sum and the balance is used to buy an annuity product,” says Cameron.

“It’s at this point that people make the wrong decisions for the wrong reasons.”

Both of the experts are in favour of the new generation of hybrid annuity products, which marry the best of traditional life assurance annuity products with a living annuity.

“People tend to favour living annuities because they worry too much about what they will bequeath their heirs,” says Cameron. “In most cases, people will look to their children for support while they are alive.”

South Africans are fortunate to have the option of many different funds, which cater to different needs, including Shari’ah, from different providers.

The legislation governing pensions has changed several times in recent years, and mostly for the good.

One improvement is that investors in retirement funds must receive counselling when they invest in a fund; when they exit or leave a fund for any reason; and most importantly, at retirement.

This is valuable information, which is given free and equips an investor for the next discussion with the financial adviser on where to invest these funds.

It is at this point in the planning process that Fourie stresses the importance of involving one’s spouse and children.

“Often the husband makes all the decisions and does not communicate these. He then passes and the wife has no knowledge or understanding of what she has.”

The involvement of family members can also help to protect the elderly from scamsters.

“We advocate for diversification, but this does not mean one should invest in high-risk property syndication schemes, shipping containers or any other unregulated schemes,” says Cameron. “And as for cryptocurrencies — that’s not an investment, you may as well go to the races.”

Dementia, as cruel as it is, is a tricky subject that may require the input of a trusted adviser. Many people are not aware that signing a power of attorney over to a son or daughter, for instance, is only valid while you are of sound mind. As soon as you are no longer capable, this lapses.

The moral here is if you believe you are susceptible to dementia, put your financial affairs in order well in advance.

One issue that retirees are particularly concerned about is Regulation 28, which governs how pension funds can be invested, and the vexed subject of prescribed assets.

While the matter of prescribed assets is hotly debated, it would appear that no changes are imminent. However, Fourie advises that once one hits the magical age of 55, it may be worth revisiting how your pension is invested.

“Before the age of 55 your pension is governed by Reg28,” he says. “But after 55 you can retire from your RA and Reg28 falls away. At this point you can invest 100% offshore should you wish.”

If anyone is contemplating retirement and would like the support of a financial adviser, Cameron recommends two websites. One is the South African Independent Financial Advisers Association and the other is the Financial Planning Institute of SA. DM/BM