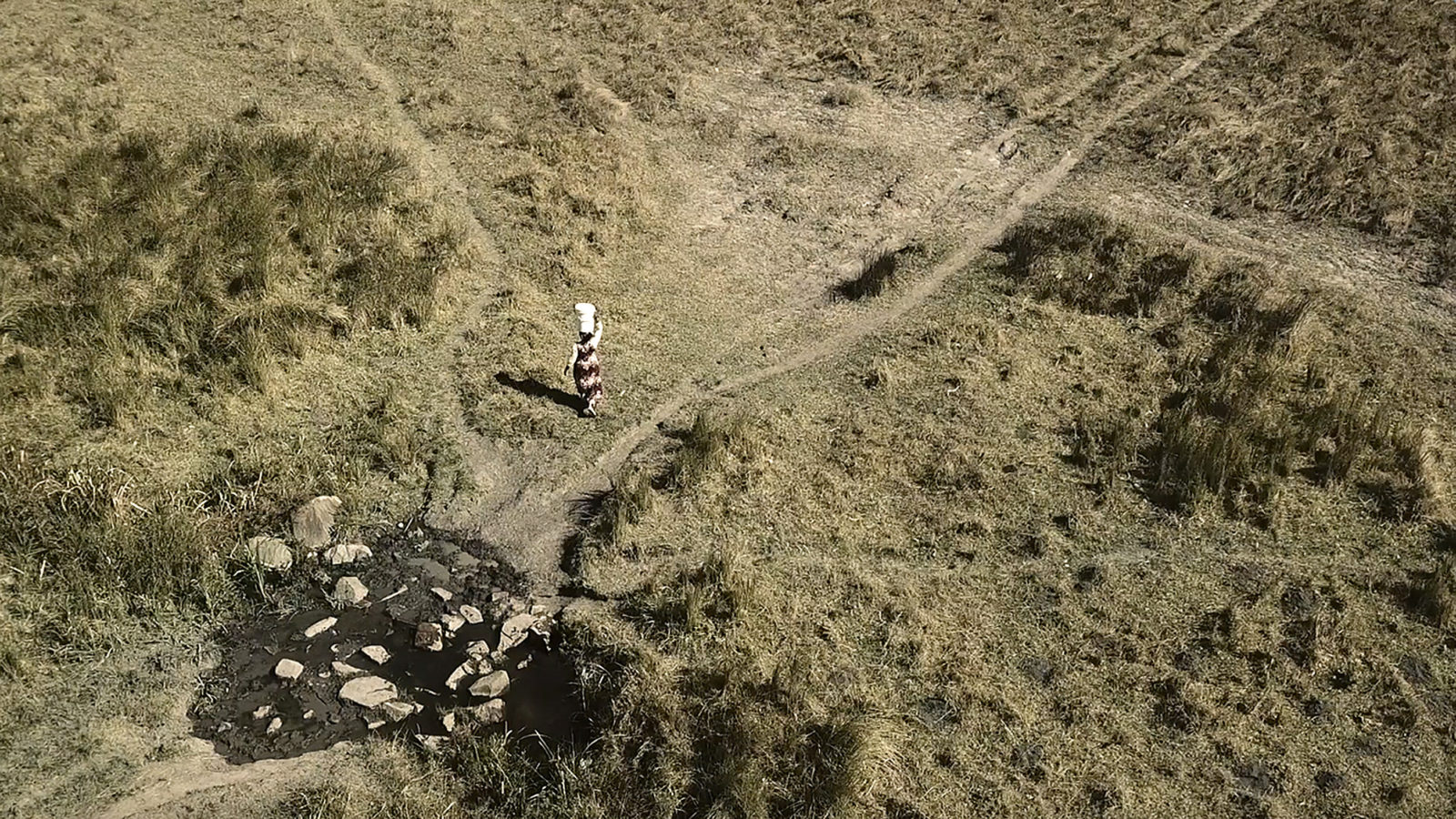 A woman collects water in this still from a documentary created to raise awareness of serious water problems in South Africa. (Screengrab supplied)

Fourteen civil society organisations have joined forces to fight the lack of access to clean drinking water across the country, but specifically in the Eastern Cape, as the outbreak of Covid-19 infections highlighted this desperate and expensive struggle facing many communities.

“Part of what we are doing here today is to say to government: At some point we need you to listen. Recognise our voice and our struggle. Recognise that we have been resilient for so long. We are exploring litigation as a way to amplify our voice and find a short term solution… As a collective we cannot say this loud enough. This is what is in our heart,” said Nontando Ngamlana, the Executive Director at Afesis-corplan, a development NGO.

Public interest and human rights organisations the Centre for Applied Legal Studies, the Centre for Environmental Rights and the Legal Resources Centre are partnering with community-based organisations such as Masifundise, Coastal Links, the South African Water Caucus, Afesis-corplan, the Vaal Environmental Justice Alliance (VEJA), Environmental Monitoring Group (EMG), COPAC, and the C19 People’s Coalition in an effort aimed at ensuring that acceptable quality water is made available to the most vulnerable communities as a matter of urgency.

“We hope that by joining forces and creating a space for communities to tell their own stories, that the true extent of suffering and hardship caused by government’s inaction will create real impetus for meaningful change,” said Boyisile Mafilika of the Masifundise Development Trust.

The South African Water Caucus (SAWC) has a list of 27 communities who have been crippled by a lack of access to water during the Covid-19 pandemic. Since the beginning of lockdown, several organisations have repeatedly appealed to the Department of Water and Sanitation to deliver sufficient water to these communities.

“The right to adequate drinking water is guaranteed under the Constitution. The South African Water Caucus has repeatedly written to the minister and the local municipalities, without even the courtesy of a reply. Litigation is never our first option in seeking to address these human rights violations, but without an urgent response and constructive engagement from government actors, we may have no other choice… It appears that our respective clients have no option but to approach the courts for relief,” said Melissa Fourie, the executive director of the Centre for Environmental Rights.

“Despite increasing numbers of cases in which courts are being used to secure the right to water, securing court orders does not necessarily bring changes on the ground. There is a lot of groundwork to cover. Government’s accountability for the right to water access stems from the understanding that they hold power in trust on behalf of the people and that their mandate includes an obligation to respect, protect, and fulfil the right to water,” said Nick Hamer, a researcher at the Environmental Monitoring Group.

Ngamlana said it had become clear that the municipal system was broken and neither transparent nor accountable.

“Most notably, the procurement process which has created a lucrative industry of unscrupulous companies awarded water service contracts. Corruption has a disproportionate impact on the poor and most vulnerable, increasing costs and reducing access to services. Effective anti-corruption measures need to be enforced with harsh recourse to discourage the inappropriate application of funds and resources,” she said.

She said that what they initially thought was a localised problem had become a nationwide crisis.

She said their plan was first to find a short-term solution for the problem.

“We are asking for the budget to be revised to respond to crisis and need,” she said but explained that their long-term ask would be for sustainable and innovative planning. “We don’t want to find ourselves in this place again in 10 years’ time.”

Mafilika said that when they had been alerted to water problems in Centane in the Eastern Cape, they went to investigate.

“We found that tanks and taps were dry,” he said.

He said that when they talked to the municipalities to understand what was going on and why certain communities were not given water, they were told that there was consultation.

“When we spoke to the person that officials said was a representative of the communities, he said he was just a municipal worker. So many of the reports provided by the officials were not a reflection of what happened on the ground,” he said.

“It is so painful to see old people drinking dirty, smelly water they share with animals. Officials give the wrong information and say everything is well. The worst of it is that if you go to the Eastern Cape, in those villages where almost everyone depends on grants, you will find they spend the little money they have on water or to buy tanks or to transport water.

He said the cheapest price for water they discovered was R700 to get water from a river to a tank.

“And that water was cheap because you can’t drink it. There were all sorts of dirty things floating in it,” he added.

“If you want better water you must pay R2,000 to have decent water.”

He said they had procured six tanks for the Centane community on condition that the tanks were transported, mounted and filled by the municipality.

“Those tanks are still in King William’s Town,” he said.

“When you follow up it is clear. They do not care.”

“We planned a peaceful march to send a letter to the mayor’s office. We were shot at on the N2. The police came from Bhisho and Mthatha — we were not even on the road. People were arrested,” said Ngxuma.

Harvey Ntshoko, a community leader of Nombanjana village, Centane, said they had been provided with taps, but no water.

“During burials, we would struggle to get water. Things got even worse when Covid-19 hit. After that we initiated a process to speak with the municipality and the response was that the water infrastructure was not in (a) good condition.

“We went further to seek assistance from the organisations here today. In June we wrote to Minister Lindiwe Sisulu and approached the Eastern Cape Premier and we have been met with an unfavourable response,” said Ntshoko.

Athini Ngxuma, a community activist from Peddie, said her area had more than 100 villages without running water.

“About 90% of our population is unemployed or relies on grants,” she said.

“They have a debt every month because they must pay people to transport water from dams to their homesteads.”

Ngxuma said she started off fighting gender-based violence and corruption, but soon found that a big challenge in the area was access to water.

She said they sent letters and messages to everyone they could think of, but nobody responded.

“We felt insulted. We were left to die. We drink from filthy dams. Amatole Municipality came to sample the water. They tested the water and said it cannot even be drunk by animals. We must take our treatment with that water. During the year with the outbreak of coronavirus infections, we were stressing because infection rates are high…

“We planned a peaceful march to send a letter to the mayor’s office. We were shot at on the N2. The police came from Bhisho and Mthatha — we were not even on the road. People were arrested,” said Ngxuma.

“I think the worst thing for me is that our people do not think that what is happening to them is wrong. They think that this is just the way it should be,” she said.

Scher said a lack of access to water had a disproportionate effect on women and girls as the burden of taking care of the household most often fell on them. In many communities, women had to travel some distance to find water and did so early in the morning as many competed for a limited resource.

Community leader Mkalitshi Cynthia Mentani, 62, also from Centane, said they hadn’t had any water since 2018.

“The water came on 12, 13 and 14 May this year, but after that, we still had no water. We are not getting any good information. When we report, they tell us that the machine is broken and sometimes the dam must be cleaned. And the third one is the drought… We are using the water from the rivers. The tractor costs us R800 for 2,500 litres of water. It is double that if you have a 5,000-litre tank. It is not easy to go to the river. We need to be assisted,” Mentani said.

Mentani was arrested for having a meeting on 10 April to find out how they could get access to emergency water tanks that the government promised to deliver during the Covid-19 pandemic.

“We saw it on the television. We wanted to talk about making a plan to get those,” she said.

Shaatira Hassim from the Legal Resources Centre said they had always been committed to addressing the water crisis with the government.

“The struggle continues… We are strategising to get government to accept the crisis. The pandemic just highlighted it. They have to act and they have to deliver. Climate change is moving the goalposts constantly,” she said.

The LRC was in constant engagement with various municipalities and also with the Eastern Cape government.

Ariella Scher from the Centre for Applied Legal Studies said they had seen problems with access to water across the country.

“The entire country is affected by water scarcity.”

Scher said a lack of access to water had a disproportionate effect on women and girls as the burden of taking care of the household most often fell on them. In many communities, women had to travel some distance to find water and did so early in the morning as many competed for a limited resource.

The pro bono department at Weber Wentzel and the Centre for Environmental Rights have joined the litigation team. DM/MC