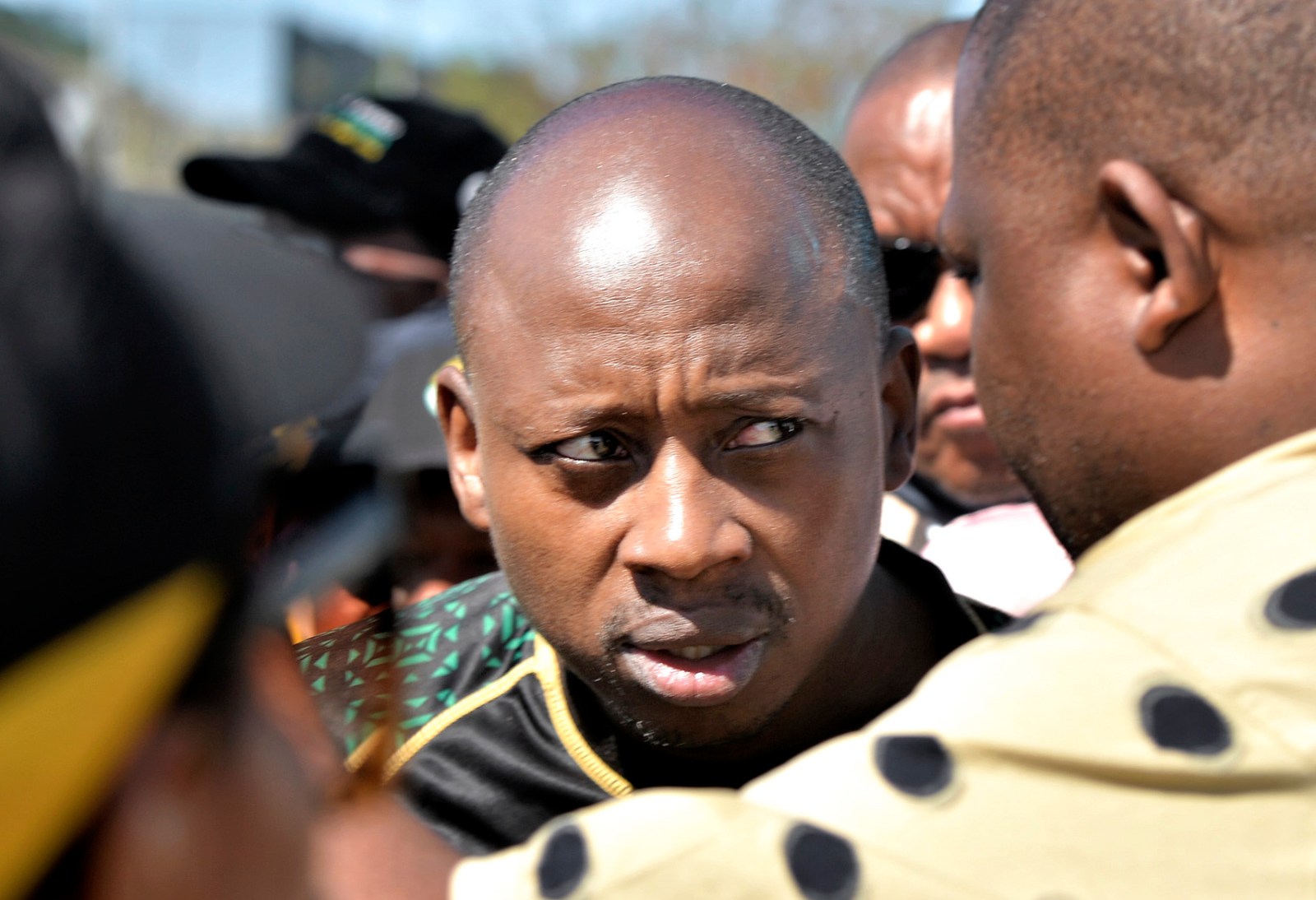 Andile Lungisa went down fighting still making claims that he was framed for the assault. (Photo: Deon Ferreira)

ANC Nelson Mandela Bay councillor Andile Lungisa handed himself over to start serving his two-year prison sentence for assault on Thursday, 17 September just before noon. Surrounded by dancing, singing supporters he went down fighting. Lungisa will apply for bail on Monday after he filed papers at the Constitutional Court appealing his sentence.

Surrounded by supporters Lungisa sent a tweet promising to overcome, gave a short speech and then walked into North End prison in Port Elizabeth to start the two-year sentence for assault with the intent to do grievous bodily harm.

Lungisa was escorted by officials from the Department of Correctional Services.

At the end of August the ANC regional task team instructed Lungisa, to step down as a councillor and as ANC branch task team member.

The Democratic Alliance’s deputy caucus leader for Nelson Mandela Bay, Councillor Rayno Kayser, the man who was severely injured when Lungisa beat him with a glass water jug, said he held no ill will towards him.

“I think the matter has come to a conclusion today. I still have migraines and suffer from flashbacks but I am trying not to let this interfere with my work for my constituency,” he said.

“I respect the outcome. I have always put my trust in the criminal justice system.”

He said regardless of how difficult it was for him to do this, his role as an elected official compelled him to still deal with Lungisa as he had occupied an important and strategic role as the member of the mayoral committee dealing with water, sewage and electricity issues.

“I had to rise above,” he said. “I had to engage with him on a professional basis. But outside of our professional relationship there was no friendship,” Kayser said. “But if I saw him in the street I would greet him because we were raised that way.”

Commenting on Lungisa’s claim outside prison that he “visited Kayser at home”, Kayser said he believed it was a joke. “It just shows that he has a sense of humour. We are not friends. He doesn’t even know what my children look like,” he said.

Lungisa’s conviction related to an incident in the Nelson Mandela Bay Council Chambers in October 2016. At the time the Democratic Alliance was in charge of the city. After another ANC councillor refused to leave the chamber on request of the council’s speaker at the time Jonathan Lawack, the Speaker summoned security personnel to remove him. What followed was recorded by Ronaldo Gouws, also a DA councillor on his cell phone. The meeting descended into chaos and Lungisa and another ANC councillor approached Lawack. Kayser who was close by was hit on the head by Lungisa with a glass jug filled with water.

Kayser lost consciousness and was rushed to hospital for medical treatment.

He sustained a number of injuries including a cut to his temple that needed stitches, several cuts between 5cm to 10cm on his neck where glass had to be surgically removed and a cut to his chest.

Lungisa pleaded not guilty to a charge of assault with the intent to do grievous bodily harm but was subsequently convicted of that charge on 17 April 2018. On 9 May 2018 he was sentenced to three years’ imprisonment, of which one year was suspended for five years.

The magistrate presiding in the case found that Lungisa was “an extremely poor witness” who “tailored his version as the trial progressed.”

This finding was confirmed by the High Court in confirming Lungisa’s conviction and sentence. The judges added that the sentence was “robust” but not so excessive as to warrant intervention.

Lungisa then approached the Supreme Court of Appeal arguing that his sentence of imprisonment was “shockingly inappropriate.”

“It was submitted that [Lungisa] was sacrificed at the altar of deterrence and that a higher standard was applied in assessing his blameworthiness because of his high political profile than would have been applied to an ordinary person,” the acting judge of appeal Nolwazi Mabindla-Boqwana said in her judgment.

“As a leader of the ANC in the council, who was responsible for instilling discipline among his fellow councillors and was a role model for aspiring political leaders, [Lungisa] had a responsibility to lead by example. Instead he did the opposite and his fellow councillors indeed took their cue from him and also threw glasses at other councillors. The trial court was correct in its description of the councillors’ conduct as that of ‘street thugs’ and I remarked that [Lungisa]’s conduct should not be tolerated … I may add that the sentence imposed by the trial court would, in my view, equally befit even an ordinary member of society, if due regard is had to the seriousness of the offence,” Mabindla-Boqwana added before dismissing Lungisa’s appeal.

National Prosecuting Authority regional spokesperson, Anelisa Ngcakani, confirmed that Lungisa had handed himself over to the Department of Correctional Services to start serving his sentence around noon on Thursday.

She said a bail application for Lungisa will be heard on Monday, 21 September at the Makhanda High Court and that the NPA will oppose bail. DM