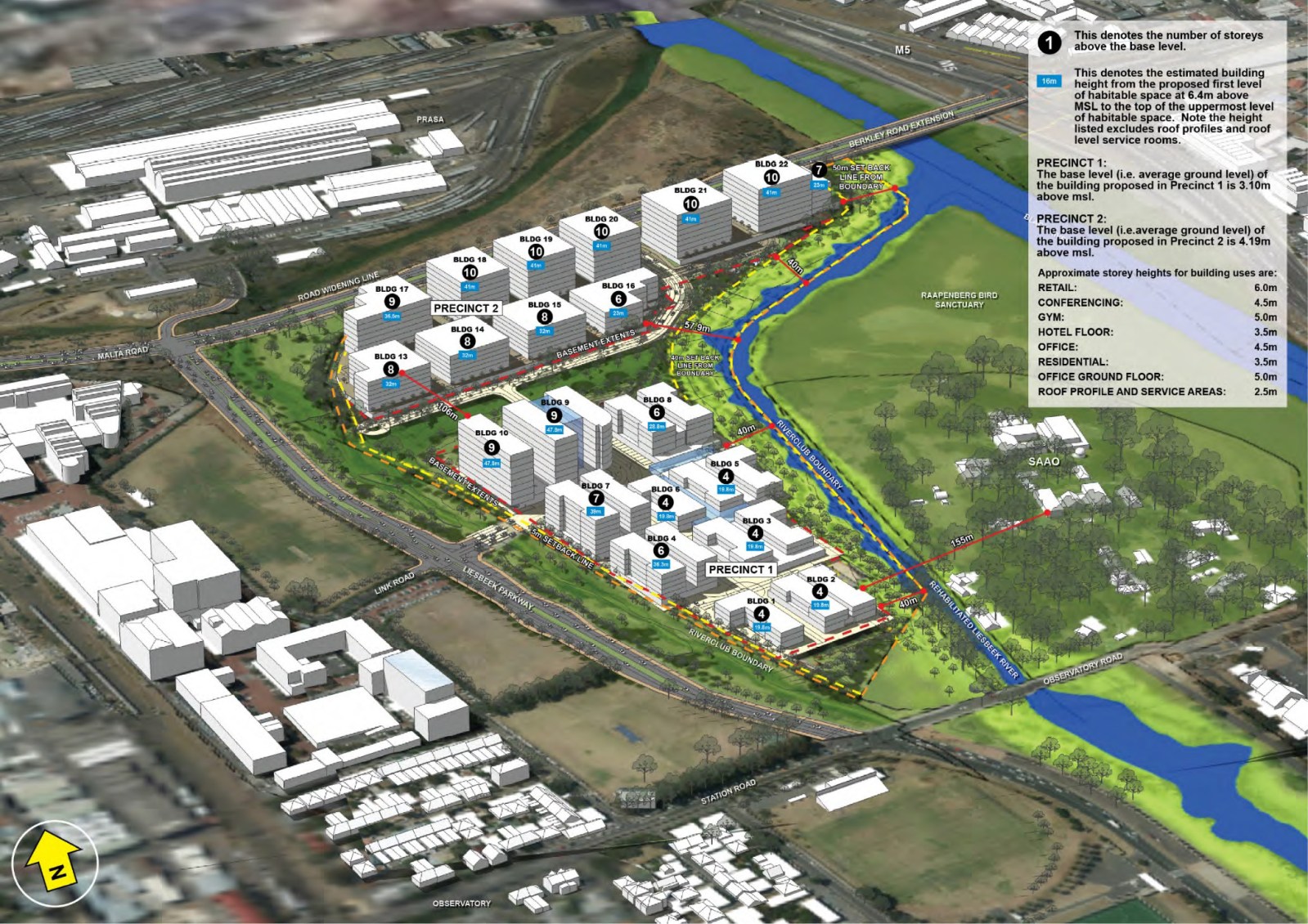 The City of Cape Town is appealing against provincial authorisation of a R4-billion River Club development. (Photo: Steve Kretmann)

The City of Cape Town’s environment department and Heritage Western Cape are appealing against the provincial authorisation given to the controversial River Club development. Among several objections, the department raises concerns over building on a flood plain.

The environmental authorisation given by the Western Cape government for a mega-development at the River Club in Observatory does not comply with provisions in the National Heritage Resources Act, according to a City department and the provincial heritage body.

The contested R4-billion development was granted environmental authorisation by the provincial Department of Environmental Affairs and Development Planning (DEADP) on 20 August. This was despite the developer’s Heritage Impact Assessment – which has to be approved in terms of the National Heritage Resources Act and the National Environmental Management Act – being rejected by Heritage Western Cape in February.

It also gives the developers the go-ahead to apply for a departure from the current local spatial development framework that does not accommodate mixed development on what is a partly a floodplain at the confluence of the Black and Liesbeek Rivers. The Trust is headed by Jody Aufrichtig, who led the Biscuit Mill and Wex developments in Woodstock.

Now, along with 40 objections from a variety of civic organisations, the City of Cape Town’s environmental management department has submitted a comprehensive 20-page appeal against the environmental authorisation granted by DEADP.

This comes after departments from both state entities supported the proposed development, which envisages eight and ten-storey buildings in a mixed office, retail, and residential complex. DEADP and the provincial Department of Public Works and Transport, together with legal representatives from the City, stood behind Liesbeek Leisure Properties in an appeal against a two-year provisional protection order invoked by Heritage Western Cape.

The provisional protection order froze any development on the land for a maximum period of two years. It was invoked to allow the heritage body time to assess the heritage aspects of the land.

Yet it appears the City’s environmental management department went to some effort to compile a substantial appeal. As the appeal, signed by acting director Keith Wiseman, was delivered one day after the 10 September deadline, it was accompanied by a condonation. This stated that, as their request for an extension was not granted, officials “went substantially beyond their normal working hours, working late nights and into the early hours of many mornings and over weekends in order to meet the deadline for submission of the appeal”, which was supported by the “City’s Executive Management”.

Besides the non-compliant Heritage Impact Assessment of land that is recognised as the first site of colonial dispossession following clashes between the Dutch and indigenous Khoi, the City’s environmental management department lists a further 12 grounds for appeal against the proposed River Club development.

Among these is that the decision to grant environmental authorisation flies in the face of the provincial government’s own spatial planning.

“The decision does not align with relevant National and Provincial Legislation, Provincial and City Policy and Spatial Plans and the Environmental Management Framework approved by the Western Cape Provincial MEC for Environmental Affairs & Development Planning,” states the appeal.

Beyond spatial and planning policies, the City department’s appeal notes the development, which is in a sensitive environmental area and situated in a one-in-10-year floodplain, is not aligned to the City’s Climate Change Policy, the City’s Bionet, the Western Cape Biodiversity Spatial Plan, or the national Protected Areas Act.

With the development proposing to fill in the floodplain, the City’s appeal warns that models show an increased risk of flooding of adjacent properties. The increase in flood levels is not “insignificant” as stated in the environmental authorisation. The appeal also warns of the future impact of climate change on flooding.

The appeal also notes the City’s comment on the draft and final Basic Assessment Reports for the development were not adequately assessed.

Prior to granting environmental authorisation, DEADP officials did not visit the site to ascertain the veracity of the City’s comments on the Basic Assessment Report. This was despite a City official offering to accompany the decision-making officials on a site inspection; an offer that was “declined telephonically”.

Yet, “given the extensive and concerning comments submitted by the City, a site inspection was warranted”.

While the City department’s appeal has been welcomed by three other interested and affected parties contacted by GroundUp, who have submitted their own appeals, concern has been raised that rezoning the River Club site to allow for the development may be pushed through at a City of Cape Town Municipal Planning Tribunal scheduled for Friday.

The Liesbeek Action Group, in their newsletter to members, stated the tribunal is to consider a rezoning application for the site, yet “hardly has the ink dried” on the environmental authorisation, and the appeal process is yet to be finalised.

Chairperson of the Two Rivers Urban Park Association, Marc Turok, said the first advertisement for the rezoning application dates back to 24 August 2018. Being over two years old, according to the City’s own Municipal Planning Bylaw, it should be re-advertised and an update on the development, the plans for which have been altered in the interim, circulated to all interested and affected parties.

In an email thread seeking clarity on the tribunal proceedings, chair of the Observatory Civic Association, Leslie London, states the tribunal “will misdirect itself” if it decides to rezone the site before the outcome of the environmental authorisation appeal is concluded.

London also noted that interested and affected parties have not been allowed to submit new information with respect to the development, but new information has been submitted by the applicant, which brings procedural justice into question.

Liesbeek Leisure Properties Trust said it has “always approached this project with maximum transparency and has remained committed to all planning approval processes as required by law”, and would “gladly” make its case in the appeal process.

No comment has been received from the City of Cape Town regarding the apparent turnaround in support for the development. DM