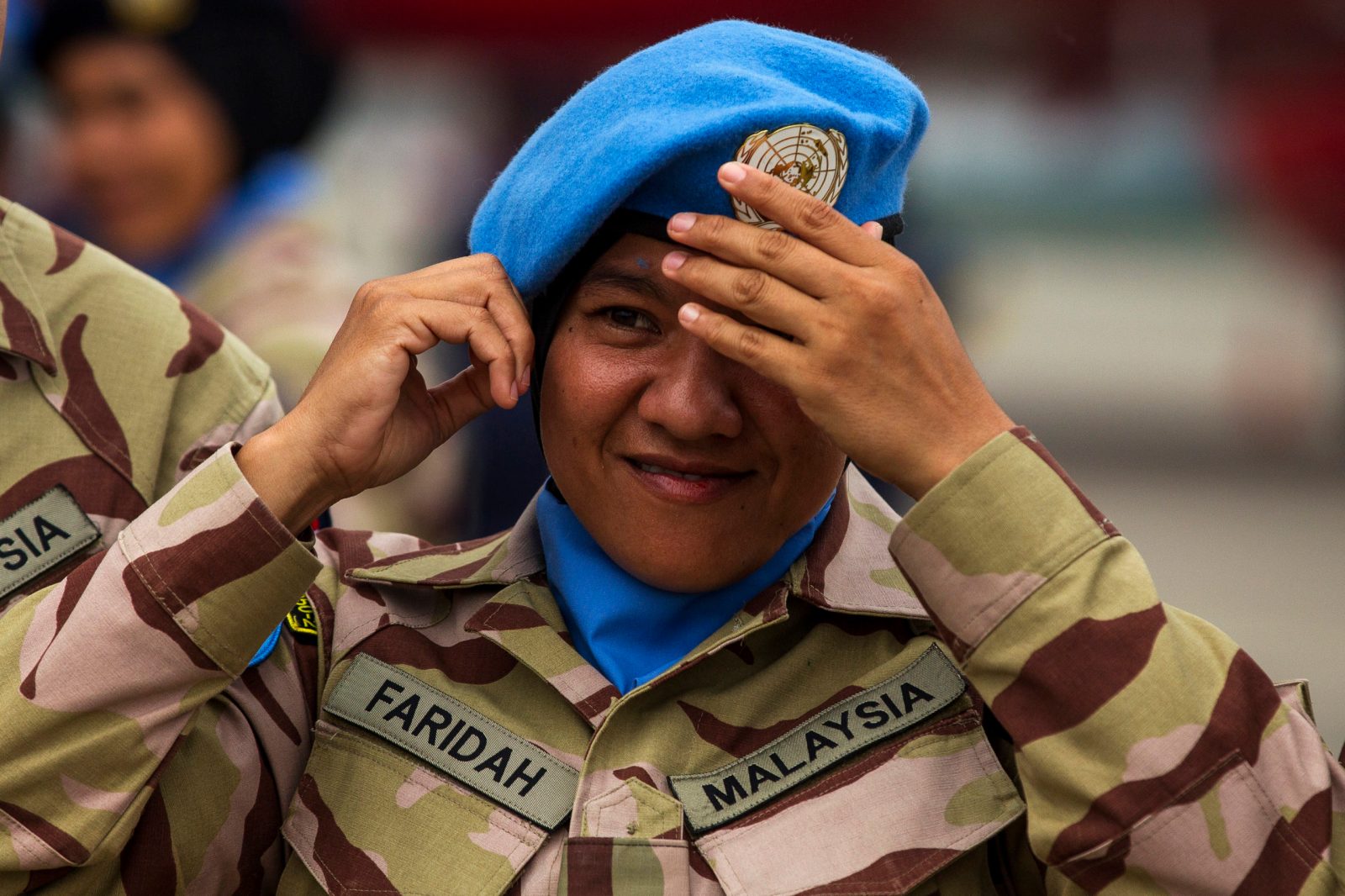 Malaysian Navy female peacekeeper adjusts her UN beret during a ceremony before leaving to Lebanon at the air force base in Subang outside Kuala Lumpur, Malaysia, 04 September 2014. EPA/AZHAR RAHIM

Peacekeeping operations, as opposed to warfare, require greater impartiality, sensitivity and empathy – attributes generally discouraged by traditional military training. One of the reasons for the inclusion of more women in the military and on peacekeeping missions is that they are ‘more effective than men in conflict resolution and decision-making, even though they may be less effective than men in combat’.

Since the mid-1990s, militaries have been deployed on missions primarily with the “responsibility to protect” civilians against acts of armed violence, genocide, war crimes, ethnic cleansing and other crimes against humanity. While these missions are often dangerous, they tend to be less oriented towards violence and require a more conciliatory approach when interacting with the civilian population.

Typically, peacekeeping operations require greater impartiality, sensitivity and empathy, all attributes generally discouraged by traditional military training. One of the reasons for the inclusion of more women in the military and on peacekeeping missions is that they are “more effective than men in conflict resolution and decision-making, even though they may be less effective than men in combat”, as Joshua Goldstein argues in War and Gender (2001).

Whereas before women’s inclusion stemmed from equal rights arguments based on the “right to fight”, the inclusion of more women now rests on their special contribution to peacekeeping operations that can improve mission performance. These arguments rest on both instrumentalist as well as normative considerations. In some contexts, the inclusion of more women is a necessity, particularly in tasks men cannot perform due to cultural considerations, such as searching women at checkpoints, interrogating women, or providing medical, social and other assistance.

Others cite their inclusion as essential, based on normative considerations that relate to women’s access and ability to identify with the problems facing the host society. Women are able to improve the effectiveness of missions in spaces that male peacekeepers cannot reach, or provide support. However, my research shows that while this may be so, it is context-specific, influenced by the intersectionality of language, race, cultural and religious differences.

Another reason advocating the increased presence of women, and for gender-mixed teams, is the belief that the inclusion of even token women curbs incidences of sexual violence, misconduct and unlawful behaviour by male counterparts.

While this is sometimes the case on foot patrols, female soldiers have little control over male soldiers while off duty when interacting with the local population. Even where they serve in greater numbers, there is little evidence to show that women can mitigate the sexual misconduct of male soldiers.

The mandate of soldiers is to provide security to prevent and protect women from sexual and gender-based violence; not to deal with victims of rape. Dealing with cases where women and girls have been subject to gender-based violence related to conflict is not part of their training, and female peacekeepers report that they are not adequately equipped to deal with such issues.

A further argument put forward for the inclusion of more women in peacekeeping operations is that they serve as role models for women and girls in post-conflict settings in the host community.

The claim is that the inclusion of more women shifts gender norms and encourages greater numbers of women in host societies to join the police and military, or become involved in peace processes. The use of Female Engagement Teams in Afghanistan, for example, was part of the efforts to promote female empowerment and rights – to empower them to have a voice and ownership in solutions affecting them.

While there is some evidence that this has occurred, such as in Burundi and Nepal, where women’s organisations have been actively involved in peace and post-conflict resolution processes, less than 10% of women have been signatories of peace processes.

Similarly, the actual number of women involved in peacekeeping operations remains low. In December 2018, only 4.2% of all those deployed on UN peace operations were women. South Africa has an average of 15% women on peacekeeping missions conducted by the SA National Defence Force.

Where women account for less than 15%, they typically experience all the negative effects of tokenism; namely performance pressures due to high visibility, social isolation due to their differences from the dominant group, and role encapsulation as an effect of gender stereotyping. One sees this in peacekeeping operations, where women are seen as “useful” in certain roles based on their femininity or sexuality, but restricted by commanders where they are considered a security threat, as if women are unable to protect themselves.

Given this, one has to look at four interrelated factors when considering the ability of women to bring organisational reform and address sexism in the military – gender imbalance, gender status, occupational appropriateness and intrusiveness.

As we celebrate International Day of Peace (21 September), we should also keep in mind that all these affect the ability of women to make a meaningful contribution to peacekeeping, and to infuse a different culture more suited to a soldier identity that involves not warfighting, but missions aimed at protecting and saving civilians, mostly women and children, affected by armed conflict. DM

Lindy Heinecken is a professor in sociology in the Department of Sociology and Social Anthropology at Stellenbosch University. She focuses, in particular, on civil-military relations, defence transformation, gender integration in the military and peacekeeping.