‘Slovenly’ Ajay Gupta acted like he owned the count... 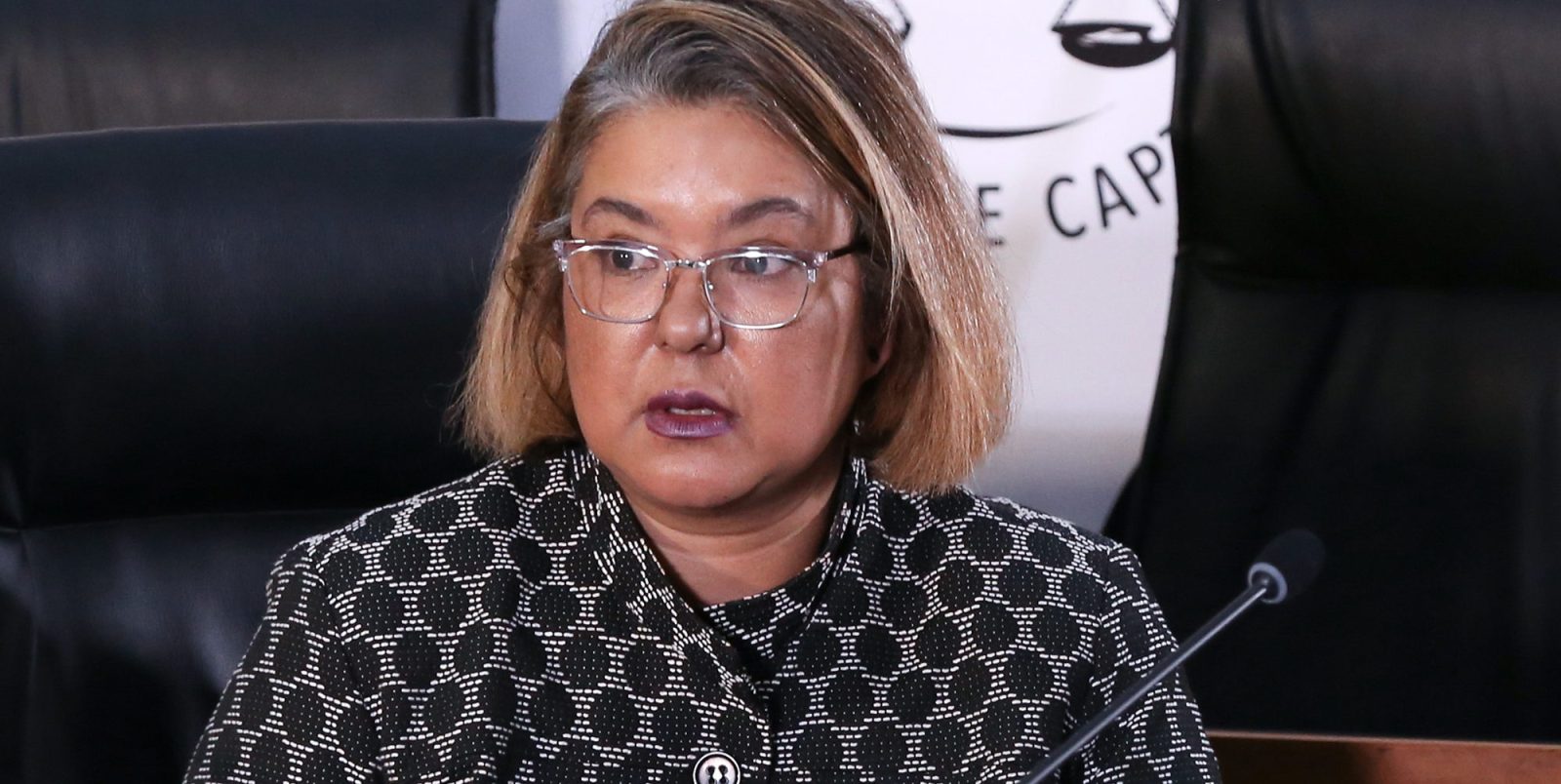 Former head of legal and compliance at Eskom Suzanne Daniels testifies at the State Capture Inquiry in Johannesburg on 15 September 2020. (Photo by Gallo Images / Luba Lesolle)

Suzanne Daniels says Ajay Gupta planned to stall a court case over Brian Molefe’s R30m pension payout from Eskom until Nkosazana Dlamini Zuma was in power. Daniels alleges Duduzane Zuma and Ben Martins were present when the eldest Gupta brother said so in 2017.

Suzanne Daniels, former head of legal and compliance at Eskom, claims she met a “slovenly” Ajay Gupta in the presence of Jacob Zuma’s son Duduzane Zuma and others in late July 2017.

Testifying at the State Capture Inquiry on Tuesday, Daniels described how Gupta appeared “slovenly” to her, as he was wearing an old T-shirt and tracksuit. “This man is sitting here and thinking he owns the country, the way that he was speaking,” said Daniels.

Daniels said she feared for her life by the end of that meeting:

“Are they going to kill me?” she  asked herself.

Daniels claims Gupta wheeler-dealer Salim Essa introduced her to the eldest Gupta brother, Ajay, in the presence of Duduzane Zuma, former minister of transport Ben Martins, and a woman whose name she cannot recall.

Daniels said Ajay Gupta wanted details on litigation over Brian Molefe’s R30m pension payout from Eskom. Daniels told Gupta of an upcoming meeting on case management with the office of the deputy judge president (DJP) and scheduled for early August 2017.

“I think he was talking to the people in the room, you know? He just said this, you know, we would need to find someone in the DJP’s office to move this case out,” testified Daniels.

Gupta allegedly announced “this matter would be easier to deal with” when Nkosazana Dlamini Zuma “comes into power” and this shocked Daniels. Her scepticism about the Gupta family and their influence on South Africa vanished. Daniels said, “This was it.”

Daniels testified she first met Essa at his office in Melrose Arch in March 2015, when he predicted the suspension of four Eskom executives (more on that below). Evidence leader advocate Pule Seleka SC asked the obvious question about the meeting in the same area in 2017, “Why did you go?”

Daniels began, “Well, Mr Chairman. As I earlier alluded to, I was actually morbidly curious at this point. This was the same…”

Zondo interjected, “No, Ms Daniels. You couldn’t have gone there out of curiosity. No, you couldn’t.”

The witness began, “Let me, let me explain…”

Zondo again interjected. “This is the man that told you in 2015 about executives that he said would be suspended and you were shocked because he’s not part of Eskom,” said Zondo. “And now you say about two years later, he calls you over a weekend, you agree to go where he wants you to go because you are curious?”

His voice rose. “After he has offered you R800-million – CORRUPTION! – you say he called you over a weekend, you agree to go and meet him because you are curious?!”

Daniels began, “I found it quite astounding that someone that I had turned down so flatly…”

Zondo further chastised Daniels, saying that after what occurred in 2015 she should not have taken Essa’s calls, and should have blocked his number.

“So what are you doing wanting to meet him over a weekend?” Zondo paused. “Out of curiosity?”

Several times during the day’s proceedings Daniels raised Zondo’s ire. His body language, tone of voice and speech demonstrated his growing reservations regarding significant portions of her evidence.

Early on, Zondo shot questions at Daniels over a claim she made about Essa. Daniels testified she first met Essa on 10 March 2015 after Matshela Koko, then an executive at Eskom, arranged to meet her at JB Rivers in Melrose Arch.

Daniels claims Koko led her to a nearby office block where, upon reaching a reception area, she was required to hand in her cellphone. They waited in a boardroom, she said.

“Then this gentleman walks in, introduces himself to me as Salim Essa and [says] that he is the adviser to Minister [of Public Enterprises Lynne] Brown,” testified Daniels.

She said Essa sought her input on how to suspend Eskom executives and forecast that four executives, including Koko, would be suspended. Koko was unfazed, said Daniels, who reported she was unhappy about meeting Essa.

Seleka relayed Koko’s version, in which he met Daniels at JB Rivers in Melrose Arch and they remained at the restaurant to discuss a labour matter. “With respect Mr Chairman, Matshela Koko’s lying,” replied Daniels. “He definitely did not ask me advice on an impending suspension.”

Zondo quibbled with Daniels’ version, in which Essa predicted executives would face suspension followed by an inquiry. He pressed Daniels as to why this important information was absent from her affidavit to the inquiry.

Seleka sought to establish why Koko would have selected Daniels to attend a meeting with Essa in 2015. Put differently: was Daniels a trusted ally of capturers at Eskom or a stooge in a far greater scheme, as she has sought to depict herself since blowing the whistle?

“I would just urge you to look at the Guptas’ modus operandi. I was not offered bags of cash. I was not entertained at the Saxonwold residence. I was not in Dubai at the largesse of the Guptas. I was certainly not a member of the Oberoi club,” said Daniels.

Yet, later Daniels testified she was offered a bribe. She claims Essa approached her at a petrol garage near Eskom’s Megawatt Park headquarters in 2017 and offered her R800-million to help Koko (then suspended) return as Eskom CEO.

Earlier that day, Daniels said, during a telephonic meeting, she presented findings regarding Koko’s conduct to Eskom’s audit and risk committee. She argued against Koko’s return.

After leaving Megawatt Park, Daniels stopped at a nearby petrol garage and noticed a black Maserati pull up. It was Essa, said Daniels, who relayed her remarks during the telephonic meeting verbatim. He quizzed her on why she did not support Koko’s return.

“The next minute he said to me, ‘I will offer you R800-million if you help us and we will do whatever you say,’ ” said Daniels. “I looked at him and I said, ‘Don’t be ridiculous.’ And I actually scoffed and burst out laughing.” Daniels claims she then entered her car and drove away.

Daniels provided the inquiry with valuable insight into Eskom’s affairs during a torrid time of illegality and all but absent governance. Her testimony has revealed her own culpability and her motives have, understandably, come under scrutiny.

While heralded as courageous in some quarters, an inquiry into her conduct at Eskom found Daniels guilty on three counts. She was fired from Eskom in 2018, after several months’ suspension. Daniels’ appearance before Zondo demonstrates the risks and complexities involved in blowing the whistle. DM