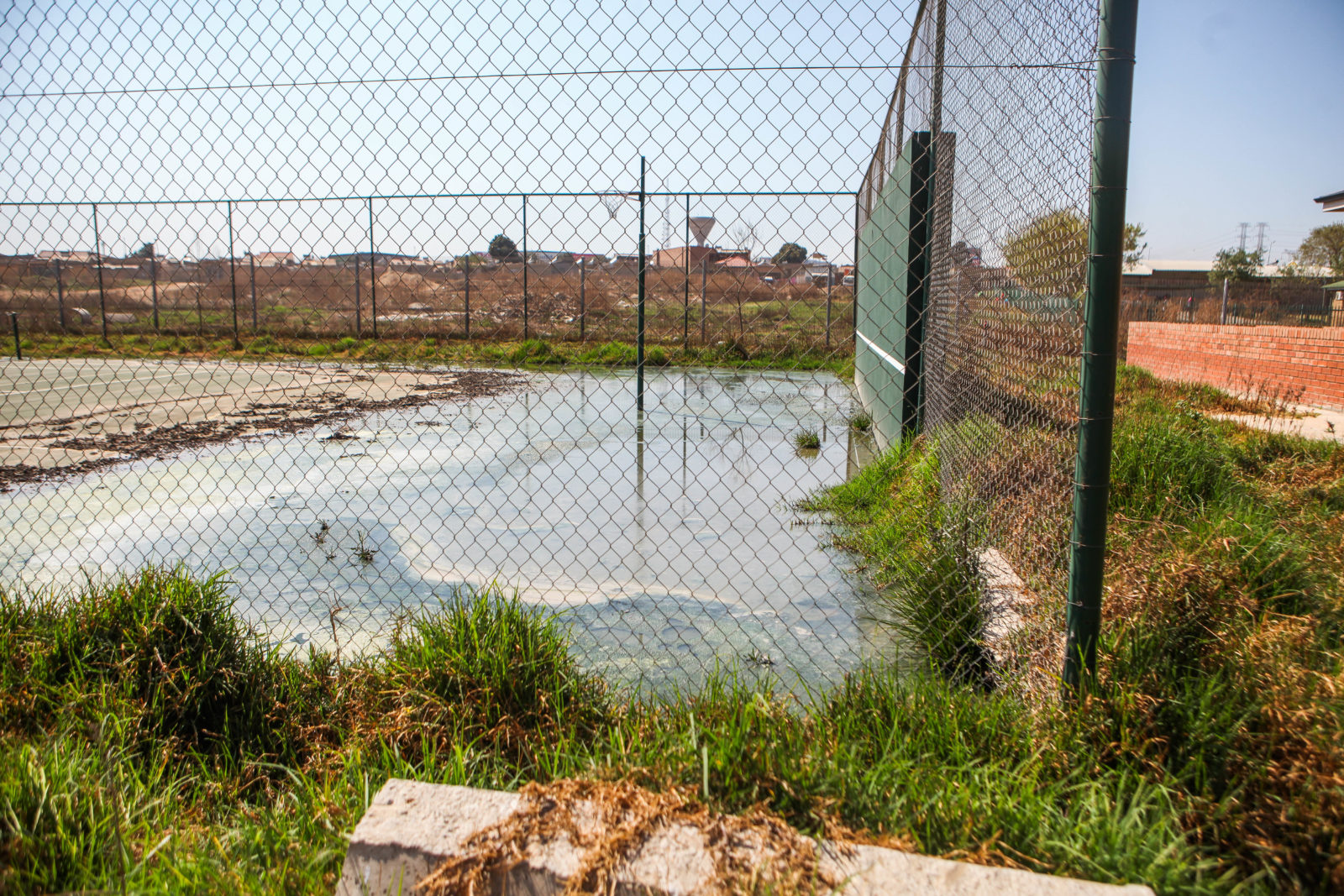 A general view of Mayibuye temporary school on September 08, 2020 in Midrand, South Africa. It is reported that the Gauteng Legislature?s Portfolio Committee on Infrastructure Development & Property Management invited members of the media to a tour at Mayibuye Primary School to expose the wastage of R82 000 000 that went into constructing a school on a waterlogged area. (Photo by Gallo Images/Sharon Seretlo)

News of an R82m school in Tembisa, alleged to have been built on a wetland, flooded the media after a Gauteng legislature committee threatened to lay criminal charges against the contractors. Now, Gauteng’s Department of Infrastructure Development and the Department of Education have approached the provincial treasury for an additional R32m to divert a leaking sewer line flooding the school.

Learners at Mayibuye Primary School in Tembisa, Midrand, have been subjected to attending school in prefabricated classrooms for 17 years.

When it was announced in 2015 that the school and its learners would finally have a brick-and-mortar structure, it marked the beginning of a new era for the Mayibuye school community, said the school’s governing body chairperson, Mokgonyane Koenite.

But five years later, learners are still waiting for the day they can use the R82-million school that has turned into a white elephant.

“The temporary containers are old and learners no longer have a good learning experience,” Koenite said. “All we want is for our learners to get the opportunity to learn under the roof of a good structure.”

When the Gauteng legislature’s committee on infrastructure development sounded the alarm on the state of the newly built school on 7 September, its main concern was that the school had been built on a “waterlogged” area.

A further concern was that the school was built in contravention of the National Building Regulations and Building Standard Act 103, 1977 as Amended. Not only that, but the City of Johannesburg (CoJ) is yet to issue a certificate of occupancy for the school due to the contractor’s failure to submit outstanding documentation.

According to the Gauteng Department of Infrastructure Development’s spokesperson, Bongiwe Gambu, reports that the school is built on a waterlogged area are misleading.

“The department wishes to stress that the school was not built on a wetland. This allegation is extremely unfortunate, misleading and malicious. Contrary to claims that there is a wetland, there is a sewer line that was discovered when the engineers conducted a wetland investigation.”

The joint venture contractor, Basic Blue/Nebavest, is said to have conducted a wetland investigation before construction began in 2017, and that is when they discovered what the department has described as “an old sewer line”.

Gambu passed the buck to the CoJ, saying “the permanent solution has to be addressed by the CoJ to do stormwater and sewer line upgrades”. In the meantime, the department would ensure that the contractor resumed with plans to divert the sewer line from the vicinity of the school.

The additional R32-million requested by the provincial Department of Infrastructure Development and the Gauteng Department of Education (the client department) from the provincial treasury will cover costs to divert the sewer line to prevent it from leaking on to the school premises, Gambu said.

It will also cover costs to build an access road to the school. The initial road  had to be changed “because, during construction, members of the community began putting up temporary structures on what should have been the access road”, Gambu said.

The construction company had not responded to questions from Daily Maverick by the time of publication.

Jones said the commission would convene a meeting with the Education Department, the Department of Infrastructure Development, the CoJ and the provincial treasury on 22 September.

“We will engage with reports from the different departments to find implementable solutions,” said Jones.

Chairperson of the infrastructure committee Mpho Modise told Daily Maverick that although the committee wanted to open a criminal case, “we were advised by the legislature’s legal team that legislation dictates that we should first hold a committee inquiry”.

Modise said whatever misunderstandings existed among the parties would be resolved.

“We won’t let such a beautiful school go to waste.” DM

Human birth control pills are as effective for gorillas. Why anyone would give that a test is an absolute mystery.