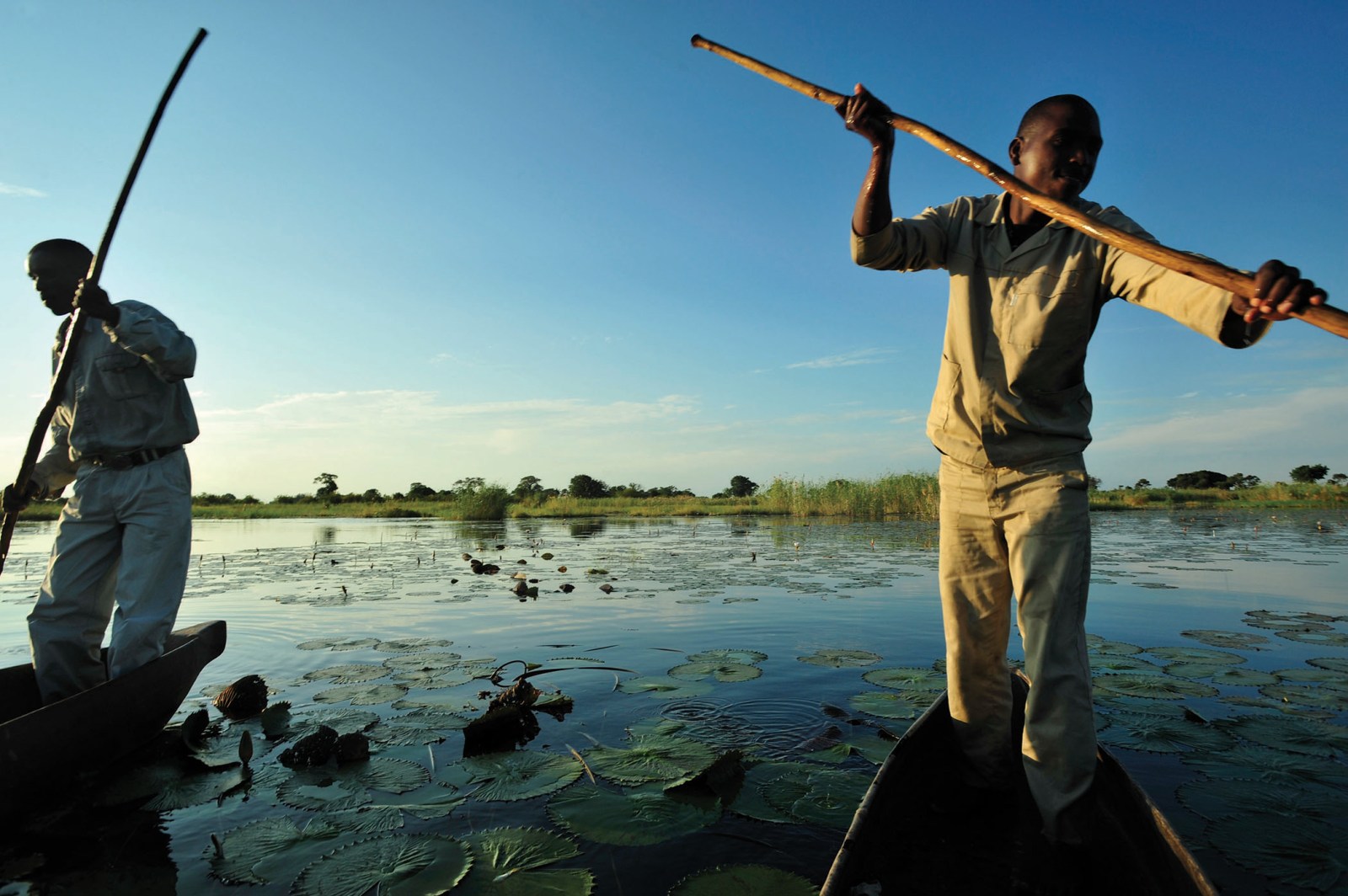 A Canadian oil and gas exploration company, ReconAfrica, says it has the go-ahead to frack in some of Africa’s most sensitive environmental areas, including the Namibian headwaters of the Okavango Delta and the Tsodilo Hills, a World Heritage Site in Botswana. But they may have jumped the EIA gun.

Canadian oil and gas company ReconAfrica said in a press release last month that it is planning to drill oil and gas wells into an environmentally sensitive, protected area in Africa that supplies the Okavango Delta with water.

The drilling location sits along the banks of the Kavango River, straddling the border between Namibia and Botswana, inside the newly proclaimed Kavango-Zambezi Transfrontier Conservation Area, the KAZA TFCA.

ReconAfrica, which is listed on the Canadian TSX Venture Exchange, explains on its website that it has acquired the rights to drill in more than 35,000km2 of north-east Namibia and north-west Botswana. Maps from both the Namibian and Botswanan ministries of mines confirm that they have been granted petroleum prospecting licences in the area.

ReconAfrica claims that this new discovery could be bigger than the Eagle Ford shale basin in Texas, which the United States Energy Information Agency says is one of the largest terrestrial oil and gas finds in the world.

Oil and gas discoveries like the Eagle Ford Basin helped make the United States the largest oil and gas producer in the world, but have also created massive problems, according to the Union of Concerned Scientists. They explain in their Guide for Residents and Policy Makers Facing Decisions Over Hydraulic Fracturing that the negative impacts of hydraulic fracturing often include poor air and water quality, community health problems, safety concerns, long-term economic issues and environmental crises like habitat loss.

The drilling area also includes one of the last refuges of the Kalahari San with a future drill site near the World Heritage Site of Tsodilo Hills in Botswana. Unesco says the site holds 4,500 rock paintings “preserved in an area of only 10km2  of the Kalahari Desert. The archaeological record of the area gives a chronological account of human activities and environmental changes over at least 100,000 years”.

Namibian-born University of Cape Town social scientist Dr Annette Hübschle is very concerned about the impact of this fracking project on San communities in the area.

“Particularly worrisome is that First Nations people, the San peoples, are living in the region. They are already living on the margins of society – this is going to negatively impact their way of life, their livelihood strategies and the place they call home.” 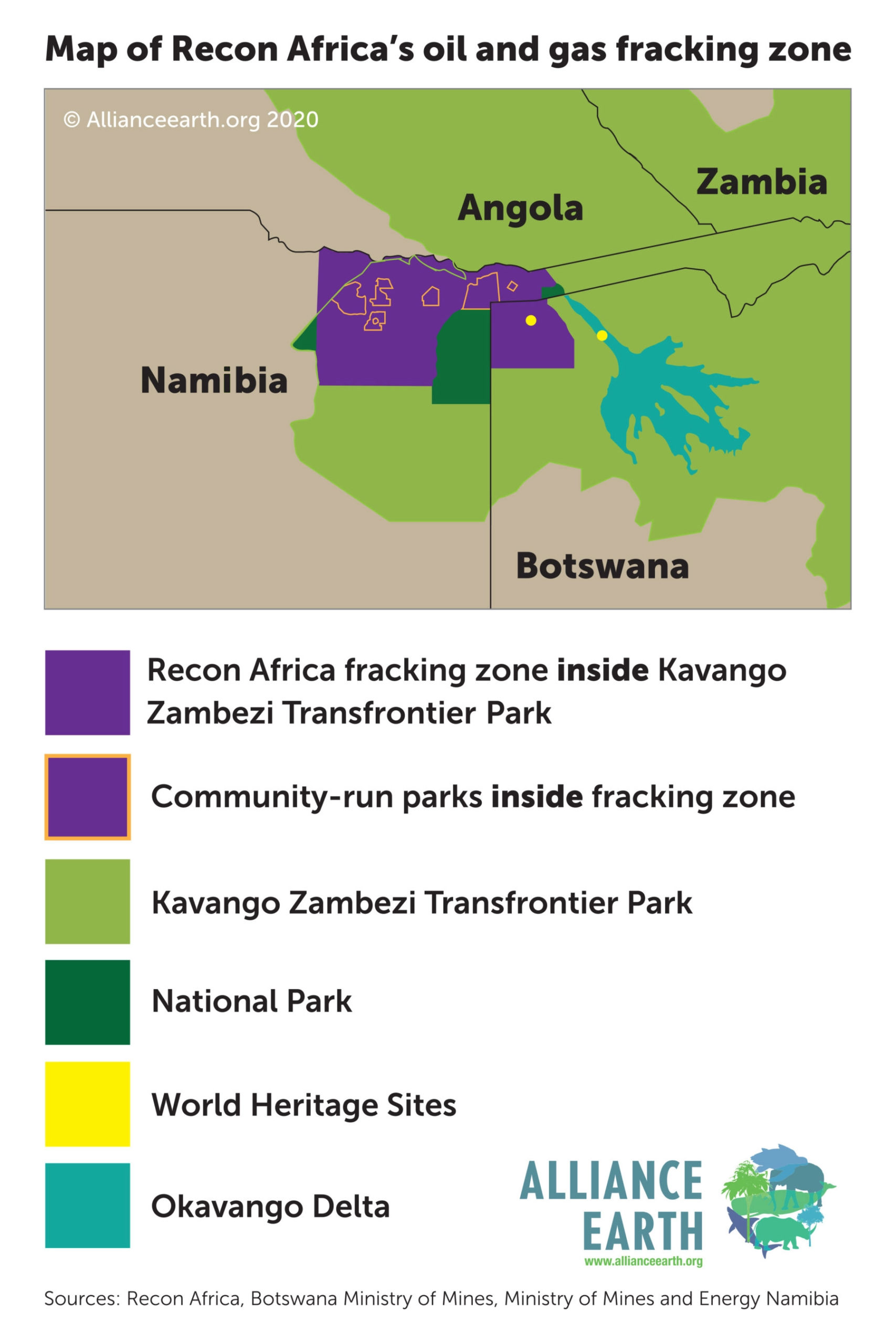 Chris Brown is the CEO of the Namibian Chamber of Environment, an industry-funded environmental organisation that helps liaise between mining companies and affected communities in this country of 2.5 million people. He says that he has never heard anything about this potential shale oil find.

He says any kind of project like this should have gone through environmental review and permitting processes.

Brown says that an environmental impact assessment (EIA) is required by law in Namibia before any invasive activities like oil and gas drilling can be conducted.

Maxi Pia Louis is the director of the Namibian Association of Community Based Natural Resource Management Support Organisations. She is also concerned about the lack of consultation by ReconAfrica in the 11 community conservancy concessions included in the alleged prospecting licence area. “I have no idea about this. It is huge: if there was an EIA, I would have known because this is where a lot of our conservation projects are.”

Max Muyemburuko is the chairperson of the 615km² Muduva Nyangana Conservancy, which is covered by the prospecting licence in Namibia. He says that two years ago people came to their community saying they were “looking for energy”.

“We tried to get hold of their team leader to hear more about their mission, but they said no, we will come back to you after completing this research, but since then they never come back.” He says he is concerned that the company may have “made deals behind our backs, and we have no idea what kind of environmental impact they will have”.

Hübschle says this lack of communication is troubling given fracking’s social and environmental record in the US.

“We should be very concerned about the long-term impacts of fracking on livelihoods, health, ecosystems, biodiversity conservation and especially climate change.”

Fracking seems to be part of ReconAfrica’s plan. ReconAfrica’s CEO Scot Evans is the former vice-president of US industry giant Halliburton. He told industry journal Market Screener in June 2020 that ReconAfrica hired fracking pioneer Nick Steinsberger in June to run the Namibian drilling project, saying, “Nick is the pioneer of ‘slickwater fracs’.” He goes on to say that hydraulic fracturing is “a technique now utilised in all commercial shale plays worldwide”.

The area is home to Africa’s largest migrating elephant population as well as endangered African wild dogs and sable antelope. It is also a cornerstone of Namibia and Botswana’s tourism economy, which brings in about $500-million a year in sustainable tourism revenue.

The Kavango River, in the north of the potential fracking zone, is the sole provider of water to the Okavango Delta, Botswana’s most visited tourist attraction. This lifeline in the desert supports more than a million people in the region with food, employment and fresh water, according to scientist Dr Anthony Turton.

ReconAfrica says it is refurbishing a big drilling rig in Houston and will ship it to Namibia in October to begin drilling as soon as November or December 2020. On its website, ReconAfrica says it owns 90% of the Namibian side of the shale deposit, with the government-run Petroleum Company of Namibia owning the rest. This is “neo-colonial extraction of the worst sort”, says Hübschle, “where Namibians draw the shorter straw and foreign companies walk away with our mineral wealth”.

Namibian Chamber of Environment CEO Chris Brown is not sure if ReconAfrica has been granted the right to drill yet because it does not seem to have followed the letter of the law, including the public participation and environmental review processes necessary in Namibia. He says that “during Covid there might be ways around this process, like doing it remotely or through something like Zoom, but doing away with it completely would be illegal”.

The Covid-19 crisis has reduced global energy prices so much that many marginal fracking companies are going out of business across the United States. Bloomberg News reports that investors are running for the hills, bankrupting shale companies that often didn’t make a lot of money for investors anyway.

Namibia’s Ministry of Environment and Tourism has shared an EIA that was done to cover the drilling of three wells by ReconAfrica, yet many members of the government, affected communities and civil society are still in the dark about this development.

In nearby South Africa, Shell has been trying to frack a large area in the Karoo for more than 11 years, but has been delayed in part by strong environmental groups like Frack Free South Africa.

Frack Free South Africa director Judy Bell is concerned about the fracking plan for the KAZA TFCA, saying that “the world is hurtling toward a point of no return due to climate heating, caused by the extraction, storage and use of fossil fuels. We have no time left, so let’s leave the oil in the ground and use the naturally abundant sources of energy from the wind and the sun”. DM