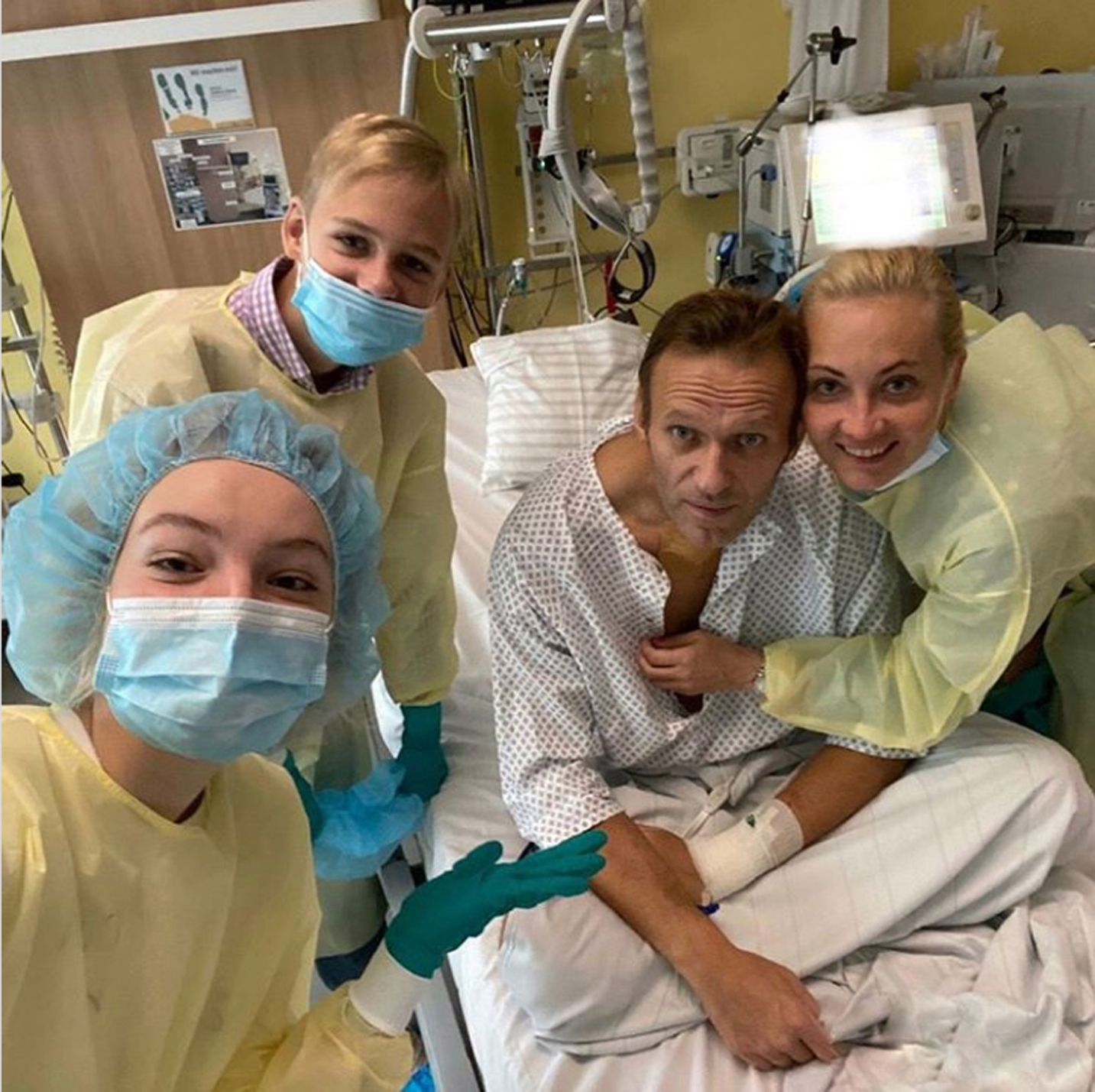 epa08670086 A undated, recent handout photo made available by Russian opposition leader Alexei Navalny via his Instagram site shows Navalny (2-R) at his Charite hospital bed where he is hospitalized in Berlin, Germany, 15 September 2020. According to the announcement of the Charite hospital, Navalny has been successfully removed from mechanical ventilation and is able to leave his bed for short periods of time. Navalny is treated at the Charite hospital in Berlin since 22 August 2020 for being poisoned with a nerve agent from the Novichok group. In accompanying text Navalny said he was able to breathe on his own all day. EPA-EFE/ALEXEI NAVALNY HANDOUT HANDOUT EDITORIAL USE ONLY/NO SALES

MOSCOW, Sept 15 (Reuters) - Russian opposition politician Alexei Navalny shared a photograph from a Berlin hospital on Tuesday, sitting up in bed and surrounded by his family, and said he could now breathe independently following his poisoning last month.

The photo – the strongest evidence yet of Navalny’s advancing recovery since he fell violently sick in Siberia on Aug. 20 – was swiftly followed by confirmation from his press spokeswoman that he planned to return to Russia.

“Hi, this is Navalny. I miss you all,” he wrote in the caption to his Instagram followers. “I can still hardly do anything, but yesterday I could breathe all day on my own. Actually on my own.”

Navalny, the leading opponent of Russian President Vladimir Putin, fell violently sick in Siberia last month and was airlifted to Berlin. Germany says laboratory tests in three countries have determined he was poisoned with a Novichok nerve agent, and Western governments have demanded an explanation from Russia.

Moscow has called the accusations groundless. Kremlin spokesman Dmitry Peskov reiterated on Tuesday that Moscow was open to clearing up what happened to Navalny, but it needed access to information on his case from Germany.

He said Moscow did not understand why, if French and Swedish laboratories had been able to test his medical samples, Russia was not being given the same access.

The case has put further strain on relations between Russia and the West, already at a post-Cold War low since Moscow’s annexation of Crimea from Ukraine in 2014 and the attempted poisoning of a former Russian double agent with the same Novichok nerve agent in England in 2018.

The photograph showed Navalny sitting up in bed and looking towards the camera, with his wife Yulia supporting him with her arms and their two children looking on.

The New York Times on Tuesday quoted a German security official as saying Navalny had spoken to a German prosecutor about the attempt on his life and said he planned to return to Russia as soon as he recovered.

Confirming the report, Navalny’s spokeswoman Kira Yarmysh wrote on Twitter: “No other options were ever considered.”