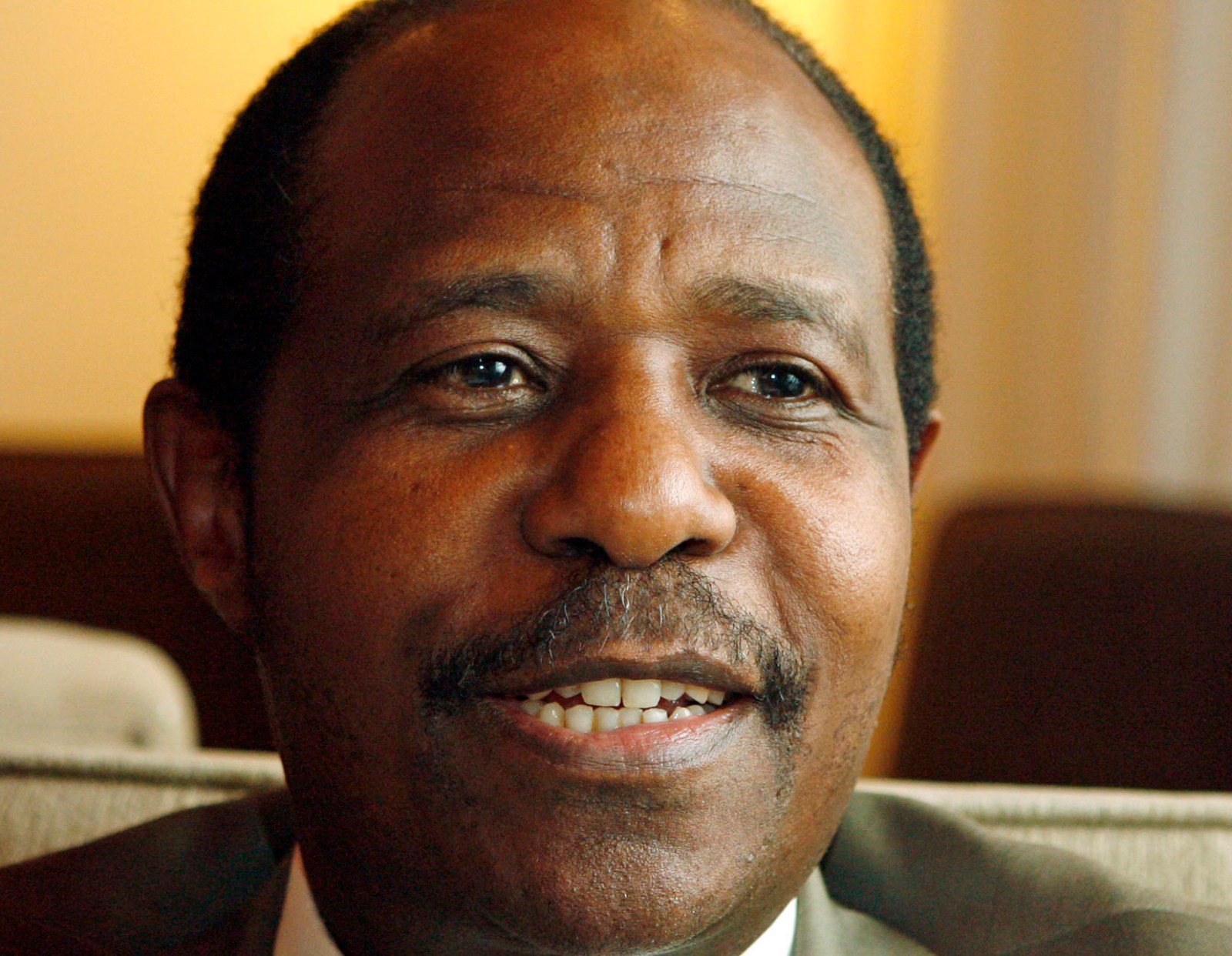 epa02416657 (FILE) A file picture dated 04 March 2007 of Paul Rusesabagina, the man who inspired the film Hotel Rwanda, at the Warwick Hotel in New York City, USA. The hotelier who was depicted heroically in the 2004 film "Hotel Rwanda" has denied charges by Rwandan authorities that he helped fund a rebel group, the broadcaster CNN reported on 28 October 2010. Paul Rusesabagina was accused by General Prosecutor Martin Ngoga of financially aiding the Democratic Forces for the Liberation of Rwanda, a Hutu rebel group that has links to the perpetrators of the genocide in Rwanda in 1994. EPA/E. SCHNEIDER / VOICES-UNABRIDGED / HO EDITORIAL USE ONLY

KIGALI, Sept 14 (Reuters) - Paul Rusesabagina, portrayed as a hero in a Hollywood movie about Rwanda's 1994 genocide, faced 12 charges including terrorism in a Kigali court on Monday in a case shining a spotlight on opposition to President Paul Kagame.

Rusesabagina, who once called for armed resistance to the government in a YouTube video, was accused of terrorism, complicity in murder and forming or joining an irregular armed group, among the charges.

The 66-year-old former hotel manager was portrayed in the Oscar-nominated film “Hotel Rwanda” using his connections with the Hutu elite to protect Tutsis fleeing the slaughter.

Brought to court handcuffed in a van inscribed “RIB” for Rwanda Investigation Bureau, Rusesabagina wore an anti-coronavirus mask and sat pensively during the hearing.

He did not immediately offer a plea but one of his government-appointed lawyers, David Rugaza, said Rusesabagina was on trial for exercising freedom of speech.

After the genocide, Rusesabagina acquired Belgian citizenship and became resident in the United States, becoming a strong critic of Kagame whom he accused of stifling opposition.

“He got a Belgian citizenship in 1999 and therefore there is another key issue here where one might say that Rwanda is trying a foreign citizen on freedom of expression that he enjoyed while abroad,” Rugaza told the one-judge hearing.

Some in Rwanda, including Kagame, have accused Rusesabagina of exaggerating his heroism, which he denies.

Kagame has ruled Rwanda since the end of the genocide and won the last elections – in 2017 – with nearly 99% of the vote.

Kagame has enjoyed widespread credit for restoring Rwanda to stability after the genocide and boosting economic growth. But international rights groups and political opponents say his rule is increasingly tainted by repression.

It is still unclear how Rusesabagina came to be in Rwanda, although Kagame hinted in an interview earlier this month that he may have been tricked into boarding a private jet.

Rwandan police have said that Rusesabagina was arrested on an international warrant. His family dispute that and say he was kidnapped from Dubai. (Reporting by Clement Uwiringiyimana; Writing by Katharine Houreld; Editing by Kevin Liffey, Toby Chopra and Andrew Cawthorne)