From schoolyard bullies to emerging fascists: The EFF’s unstoppable politics of violence

From schoolyard bullies to emerging fascists: The EFF’s unstoppable politics of violence

Daily Maverick timeline tracker reveals at least 11 serious instances of violence — or violent intent and potential for violence — in two years by the EFF, with accountability in only two.

The EFF has instrumentalised violence as a key part of its political strategy and it’s working for the start-up party.

Clicks, which published a racist campaign for a haircare brand, caved in to the EFF’s brinkmanship when it reached a rapprochement with the party on 10 September. It has done what the party told it to – disburse sanitary towels and bursaries as per EFF instruction – even though 37 stores were vandalised by EFF members, many in party regalia.

The party has denied its members were the culprits, as it often does when things turn violent – as they frequently do. It has told Clicks it will help identify the “agents provocateurs” and see that justice is done.

Violence is now a method with the EFF, as this graphic timeline shows.

In a Daily Maverick timeline tracker, the party and various of its members have been involved in various forms of serious violence at least 11 times since March 2018.

While criminal and civil charges have been laid against them, most of these have not succeeded or the cases are still dragging their way through court, creating a playing field of impunity for the red berets.

H&M and the hoodie from hell

In January 2018, H&M, the Swedish retailer caused a storm when it advertised a hoodie showing a monkey on a young black boy. The young white model got a tiger hoodie. It caused a global crisis for H&M, which overhauled its global supply chain and its diversity and race policies.

But EFF members looted and vandalised stores and nothing happened. (It also didn’t stop the EFF leaders from shopping at H&M later.)

In December 2018, EFF members looted and vandalised Vodacom outlets because they did not like a slide that ANC veteran Mavuso Msimang showed at a journalism award. The CEO Shameel Joosub and his executives met the EFF at its headquarters and no charges were pursued either by Vodacom or the franchisees who owned the trashed telco stores.

Fast-forward to September 2020 and the EFF has repeated it in Act 3. This time its members trashed 37 stores and saw Clicks shut its entire fleet of more than 400 outlets for at least a day, some for more. Shoppers were harassed and social media was flooded with stories of people who could not get their chronic medication.

Three CEOs have caved in to the EFF’s bully tactics. As a party represented in Parliament and with an outsize influence on South African politics, the EFF could easily use procedures at the legislature, through the Chapter Nine institutions and the courts to ensure that corporates who haven’t shrugged off the apartheid past are put through their paces. 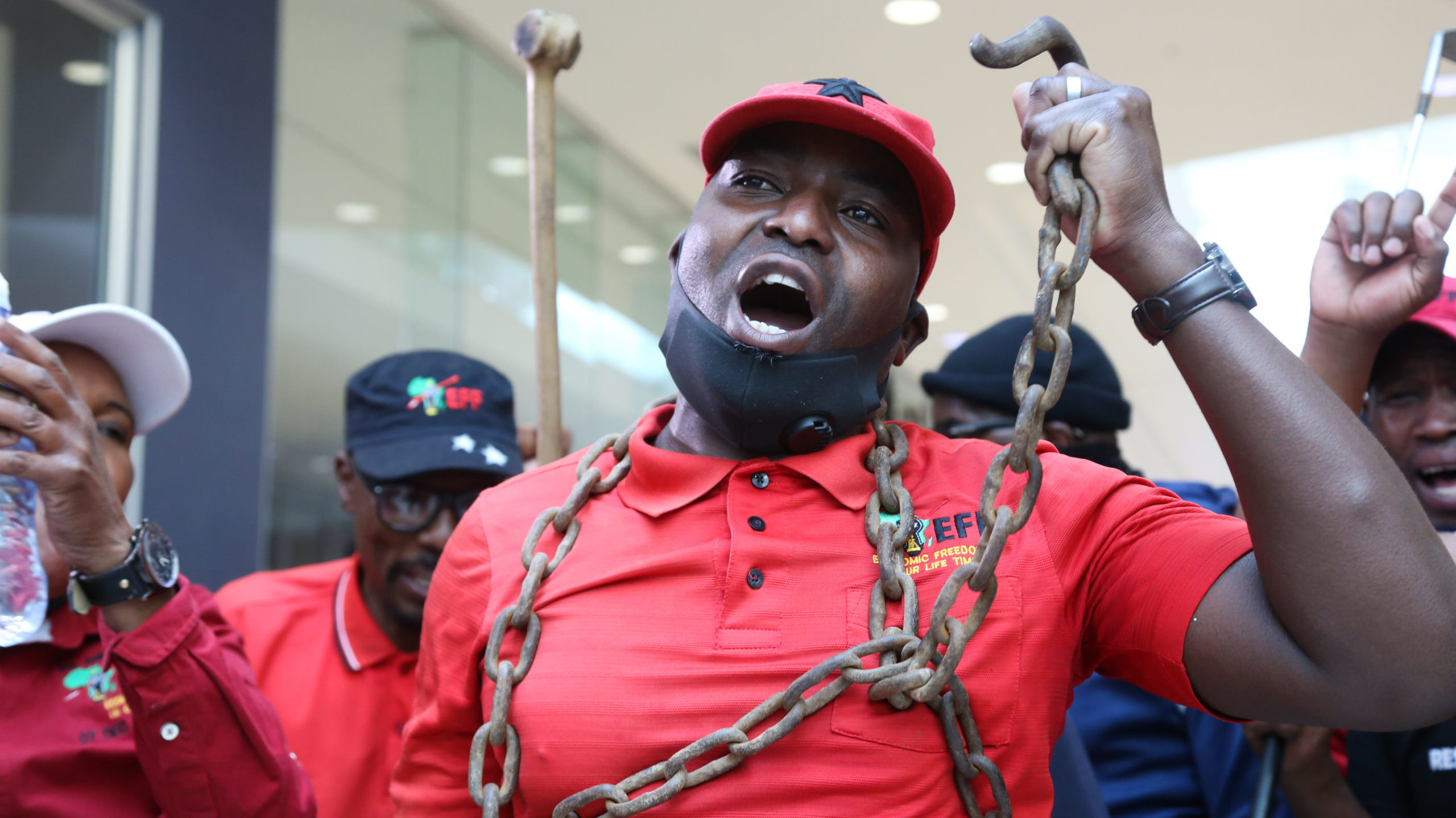 But violence has come to serve the EFF well as a means of populism and of patronage. Part of the Clicks settlement allows the party to extend its patronage because it will decide where and to whom the sanitary towels and bursaries are distributed.

Vodacom won’t say, but it’s likely the company was similarly shaken down.  This normalises violence and institutionalises hostage politics where corporations, eager to get out of the public eye and the headlines, will play nice with thuggery. It’s not unusual in gangster states – a lot of Latin America is run by political mafias.

On Radio 702 this week, Azania Mosaka, the afternoon host, spoke about how she knew of inter-family feuds where EFF T-shirts were worn to intimidate members and push through positions.

Where it co-governs, the EFF is said to bully agencies to get its own people on to parastatal and state-owned entity boards. In light-manufacturing areas and on some mines, the EFF locals are like a cross between trade unions and militia, negotiating at workplaces without recognition agreements. These are parts of the country where there is no media glare and where the red T-shirt and red beret is often a symbol of a mayhem you’d rather pay to make go away.

I’ve heard of business people, in turn, who will “hire” local EFF brigades to take care of problems, be it “troublesome” workers or debtors who won’t pay up. If you listen carefully at Parliament to the EFF positions on some matters, there is usually a lobby attached: its campaign to stop the curatorship of VBS Bank (before Pauli van Wyk exposed what was really happening) was an example of how the party can also become a pay-to-play machine.

The party has franchised violence and when questioned, leaders will say that it has not patented the red overall and beret and that members engaging violence are not EFF.

But, here’s where it gets important to watch the EFF Twitter timelines: the party leader Julius Malema has said that he needs Twitter because he and other leaders use their huge followings to direct action.

The Clicks vandalisation was preceded by Malema calling his “ground forces” to “Attack” on Twitter as did his lieutenant EFF MP Mbuyiseni Ndlozi. While all the major political parties now organise on social media, the EFF’s viral footprint leaves the others panting in its wake.

Who will bell the red cat?

This tracker shows that almost nobody will and that the politics of violence is now part of the party’s DNA – an acceptable exhibitionism often laughed off “Argh, it’s just Juju”. Outgoing Wits vice-chancellor Adam Habib has shown the folly of such a position in this essay which likens the EFF’s tactics to early forms of fascism.

In the cases tracked by Daily Maverick, the two violence-related cases that have led to some accountability —  in the form of civil judgments against the EFF — were:

Also in civil court in another defamation case, the EFF was ordered to cough up R500,000 and apologise to Trevor Manuel after labelling the process of selecting new SARS commissioner Edward Kieswetter as “patently nepotistic and corrupt”.

Various criminal charges against the party have dragged on, most for years.

Violence can be like a bullet train – fast and unstoppable. Unless South Africans do something about it. DM