Protesters regroup in Colombian capital for protest against police brutality 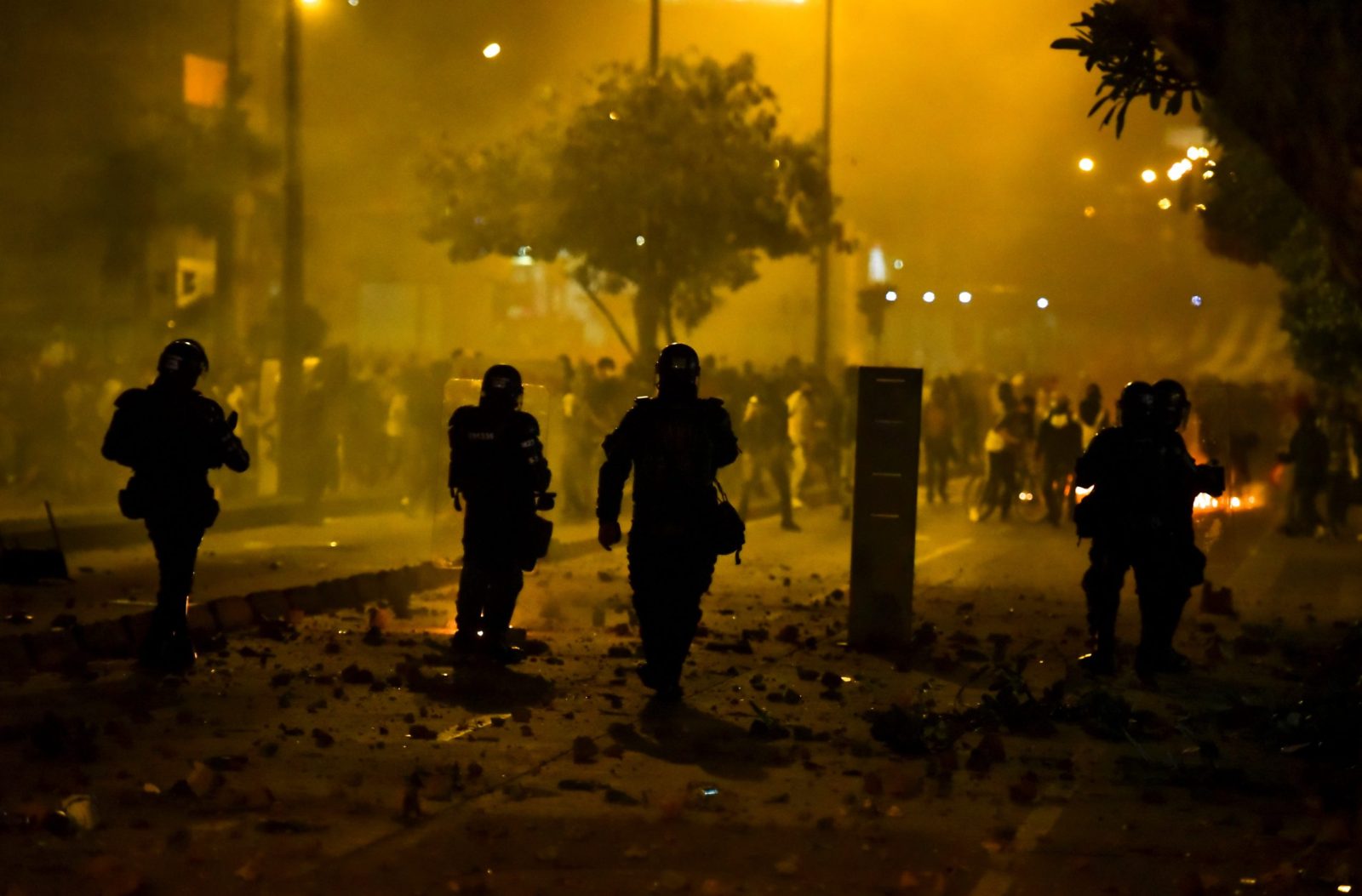 epaselect epa08660405 ESMAD riot police forces confront demonstrators during a protest due to the death of lawyer Javier Ordonez, who died after an brutal encounter with two policemen in Bogota; in Cali, Colombia, 10 September 2020. Demonstrators returned to protest this in different areas of Bogota and other cities in Colombia against police brutality, although so far with less intensity than the day before, when clashed between police and protestors left ten people dead. EPA-EFE/Ernesto Guzman Jr.

BOGOTA, Sept 10 (Reuters) - Demonstrators took to the streets for a second night in Colombia's capital Bogota on Thursday to press ahead with protests against police brutality that have erupted in violence and taken nine lives so far.

The demonstrators were protesting the death this week of law student Javier Ordonez, 46. A widely-shared video filmed by Ordonez’s friend showed the father of two being repeatedly shocked with a stun gun by police. He died later in a hospital.

Some 300 protesters gathered once again Thursday afternoon outside the police station in Villa Luz, where Ordonez was taken before his death and which was heavily damaged on Wednesday.

“How many are you going to kill today,” screamed barista Alejandra Pulido, 25. “The authorities that should protect us are killing us!”

“Pigs, pigs, pigs!” chanted the crowd, as police officers with riot shields stood in front of a statue of the Virgin Mary.

A number threw stones at the assembled police while others spray painted graffiti on their riot shields.

Since the protests started Wednesday in Bogota and satellite city Soacha, at least nine people been killed while hundreds of civilians and police officers have been injured.

Bogota Mayor Claudia Lopez said people should return to their homes by evening, to ease tensions.

“Although there is no curfew in Bogota, we ask that by no later than seven o’clock, all those who can, please stay at home,” Lopez said in a Facebook Live broadcast.

Yet as seven o’clock approached demonstrators threw rocks and bottles at police, attacking the windows of the station with an uprooted road sign and setting the front of the post briefly alight.

The video of Ordonez shows him pinned to the ground by police officers and subjected to successive electric shocks early on Wednesday as he begs, “please, no more.”

Police say Ordonez was found drinking alcohol in the street with friends, in violation of coronavirus distancing rules. He was taken to a police station in western Bogota.

Two officers suspected of involvement in the alleged abuse of Ordonez have been suspended pending an investigation, the government has said.

“He was murdered by the police officers,” his sister-in-law, Eliana Marcela Garzon, told Reuters. “We don’t want (deaths) in a country already full of conflict, we want justice.”

Police reform is needed, Garzon said, especially for the future of children like her now-fatherless nephews.

President Ivan Duque has said abuse of authority should not be tolerated, but the government called for Colombians not to “stigmatize” police officers and appealed for calm.

Bogota’s police will be reinforced with 1,600 more officers, more than half of whom will come from other regions, and 300 soldiers, the defense ministry said.

But Ordonez’s death could fuel renewed outrage against the police, who were widely criticized last year after a teenage protester was fatally injured by a riot squad projectile. (Reporting by Luis Jaime Acosta, Julia Symmes Cobb and Javier Andres Rojas, Additional reporting and writing by Oliver Griffin, Editing by Rosalba O’Brien and Tom Brown)