Food sovereignty: The only solution to the hunger crisis 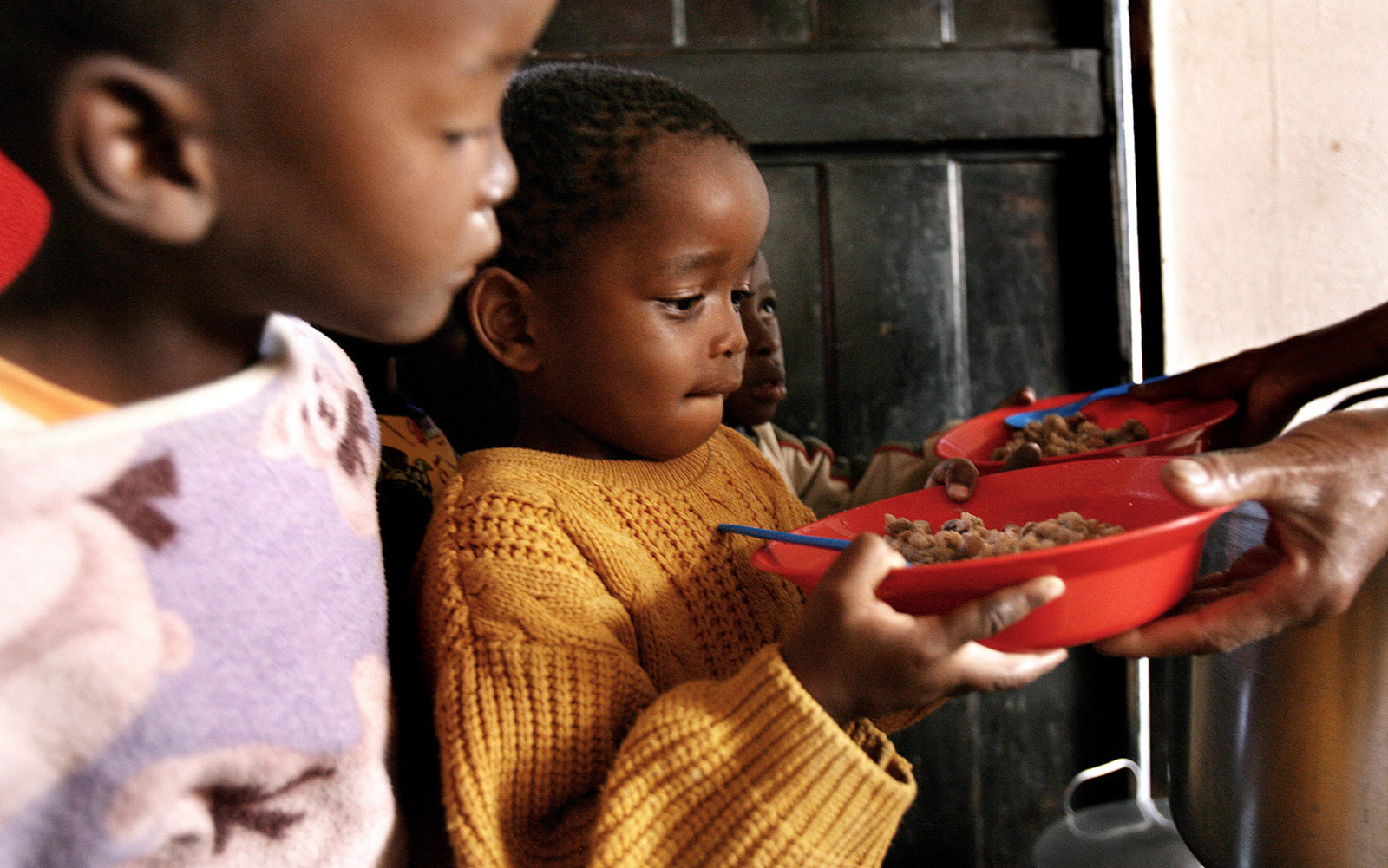 A file photograph dated 23 May 2006 shows a child receiving a plate of food at a feeding scheme in Soweto, South Africa. (Photo: EPA/JON HRUSA)

Ongoing research from across South Africa points to unfolding social crises. In a highly unequal country suffering from a vacuum of leadership, legacies of apartheid, colonialism and entrenched patriarchy, the most vulnerable in our society are bearing the brunt of these crises. Poor black women and children, in particular, live at the intersection of multiple crises and also act as shock absorbers for their communities. Hunger is a case in point.

Before 2020, communities were already suffering from hunger, unemployment, violence and water shortages. But these challenges have been highlighted and, in most cases, exacerbated by the Covid-19 pandemic. Hunger particularly has drastically increased because of rising food prices, loss of income, and lack of access to markets and small-scale producers.

In time, the pandemic will pass, but hunger and lack of access will remain. We will still be faced with rising food prices and food inequality, because of another silent pandemic: the climate crisis. While we are in this predicament, it is imperative to build systems which will not only help us solve the hunger crisis now, but which will empower communities in the long run and allow them to be resilient in the face of the climate crisis.

With the Covid-19 pandemic and subsequent five-month lockdown, increased hunger coincides with mass unemployment. There has been a 40% decline in active employment since the pandemic hit the country, according to the Coronavirus Rapid Mobile Survey (Cram). CRAM also indicates 1 million people who have lost their jobs have fallen into poverty, and two out of five adults reported that their main source of income had been lost since the lockdown began. The ongoing drought had already entrenched communities’ hunger crises before the Covid-19 pandemic. The lockdown worsened this, and rising temperatures due to the climate crisis will continue, causing more extreme droughts. In the future, this will jeopardise food production and drive up food prices.

Hunger is a central and urgent challenge for this country — before, during and after the pandemic. Unfortunately, the corporate-owned food system does not have the capacity to address it. In the face of these concurrent crises, government-issued grants and food parcels have not been the effective solution promised.

According to this analysis by Professor Jeremy Seekings, director of the Centre for Social Science Research at UCT, the Department of Social Development admitted that its intended food aid reached only about 25% of those who needed it.

Additionally, the nutritional value of food parcels has been questioned by Africa Check and others. An average food parcel contains less than half of the average recommended calories for a family of four (over a month). Many parcels are shared by more than four people, which further decreases their caloric and nutritional intake.

Government aid processes have been marred by corruption, uneven implementation and exclusionary distribution practices. The government’s approach, as well as that of the Solidarity Fund, has not only been limited in scope, but also in intent, as it has neglected the need for a long-term solution to the hunger crisis.

A South African woman prepares a hot meal for the community in the informal settlement of Masincedane which is a beneficiary of the 9 Miles Project and Hope Southern Africa (HOSA) COVID-19 feeding scheme in Cape Town, South Africa, 28 April 2020.  (Photo: EPA-EFE/NIC BOTHMA)

The South African Food Sovereignty Campaign-convened National Food Crisis Forum (SAFSC, NFCF) has conducted research on food relief across the country to pinpoint inefficiencies and areas for improvement in the food system. In addition to the mapping process which was done with the data collected from the survey, the committee wrote a short report summarising the findings and made 11 recommendations.

The NFCF survey’s findings support the conclusion that the hunger crisis has now worsened. During the lockdown, many organisations chose to provide various food relief initiatives to local communities and beyond, but these do not solve the hunger problem either.

Second, an increase in need from the communities because of increased unemployment and hunger would require initiatives to grow in their efforts to meet the increasing demand. With rising unemployment, the climate crisis and consequent increase in hunger, these numbers will accelerate.

Third, initiatives will not be able to meet this growing demand in the long term as most (42%) rely on donations, which is fundamentally unsustainable because of donor fatigue. During the economic recession, funding will also be in short supply.

So, as the demand for food relief rises, the capacity to meet it will decrease. This dynamic of food relief is fundamentally untenable and unsustainable. We need to employ more food sovereignty-based initiatives to avoid falling into this trap of reliance on the current food system which will exacerbate the hunger crisis further.

Women receive bread at a food handout during the Eid al Adha at the ‘Hunger Has No Religion’ feeding scheme, in Johannesburg, South Africa, 01 August 2020.  (Photo: EPA-EFE/KIM LUDBROOK)

We have to build the next food system now.

The recommendations below are made in the NFCF report, in an effort to find a better solution to the hunger crisis and to entrench food sovereignty pathways:

The affordability of food and social security grants is critical to avoid mass food shortages and malnutrition. Insufficient state spending on food access means more will be spent down the line on health services, burials and lower output from schools.

In the long run, the only sustainable solution to the food crisis is food sovereignty: giving people ownership of the means to produce their own food and create their own food systems. This can be provided through meaningful long-term engagement between civil society organisations, small-scale farmers, and the private and informal food sectors. Sustainable food solutions are key to mitigating the food crisis in South Africa and making hunger an issue of the past.

After Covid-19, we cannot go back to normal, because normal was far from good enough, and it will certainly not be good enough in the face of the imminent climate crisis. DM/MC

The full report on the NFCF survey includes greater detail on its findings.

Katherine Brown is a junior researcher at the Foundation for Human Rights and a member of the NFCF Food Relief Mapping Committee, which conducted this survey. Katherine has a Bachelor of Social Sciences Honours in Justice and Transformation from the University of Cape Town and is a master’s candidate at Sciences Po for International Development at the Paris School for International Affairs.

Courtney Morgan is an ecofeminist, a climate justice activist with the South African Food Sovereignty Campaign, and a member of the NFCF Food Relief Mapping Committee. Courtney has an undergraduate degree in international relations and geography, and a Bachelor of Science Honours degree in geography from Wits University.