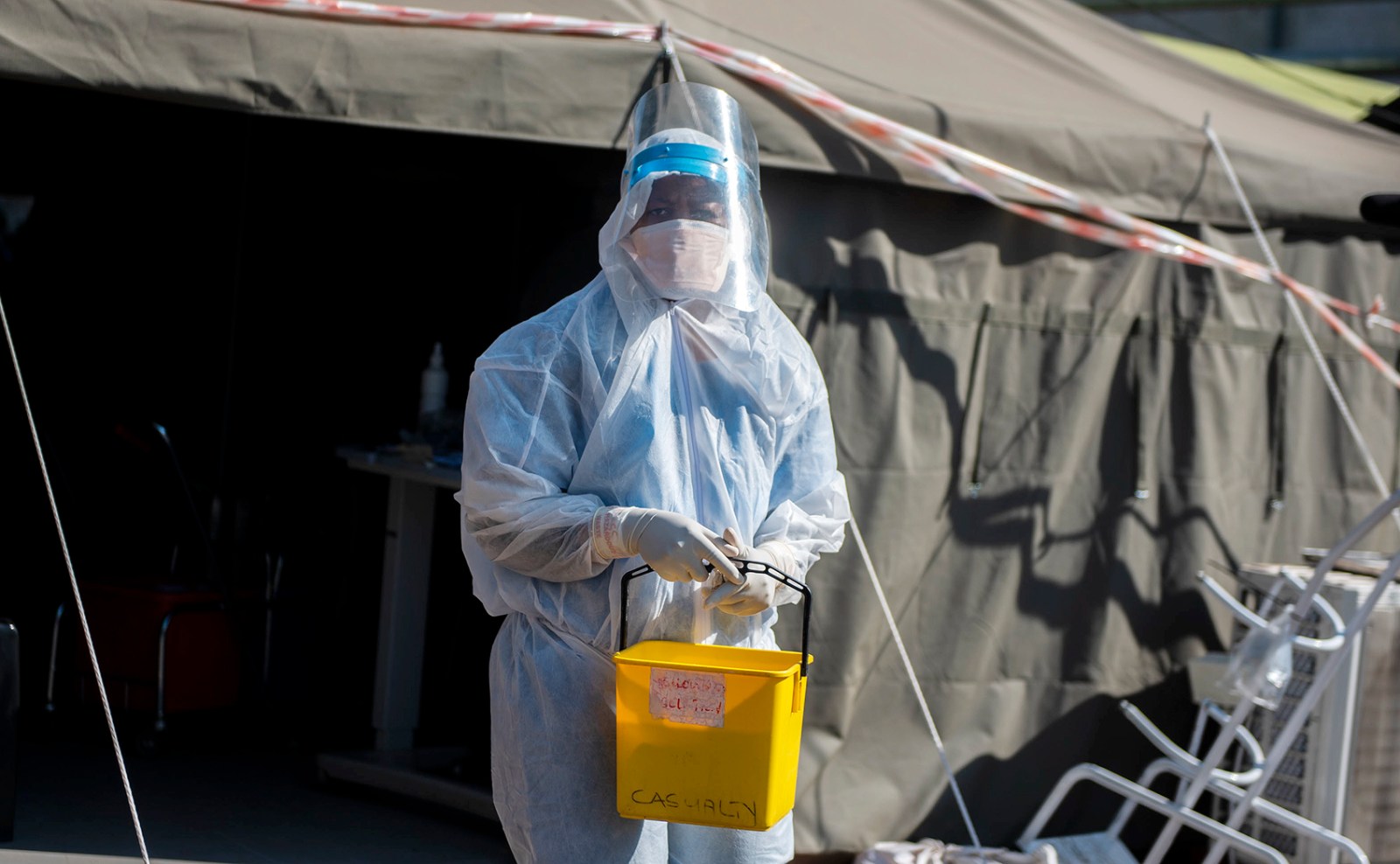 TSHWANE, SOUTH AFRICA - JULY 10: Cleaners wearing personal protective equipment (PPE) busy cleaning in a tent dedicated to the treatment of possible COVID-19 coronavirus patients at the Tshwane District Hospital in Pretoria on July 10, 2020 in Tshwane, South Africa. According to a media release, Health MEC and the Minister Mkhize visited the facility as part of supporting the staff that is working tirelessly during the COVID-19 pandemic. (Photo by Gallo Images/Alet Pretorius)

Even as South Africa’s need for a more equitable health system is being demonstrated, news has broken of large scale corruption in personal protective equipment (PPE) procurement.

This latest scandal has made it difficult for a population worn down by corruption to envisage the transformation of the health system into a system of contracting and procurement under National Health Insurance (NHI). A focus on governance and transparency under NHI is desperately needed to foster trust in the new system.

An Auditor-General report released on 2 September found, among other things, that PPE was procured at up to five times the market price.

“We have been reporting on and warning about poor financial management controls, a disregard for supply chain management legislation, an inability to effectively manage projects, and a lack of accountability in many of the government sectors that now need to lead or support the government’s efforts,” Auditor-General Kimi Makwetu said.

In other words, the loss of R500-million on PPE procurement did not come out of the blue.

On 6 September, further reports emerged about the poor quality of some of the procured PPE which has put health workers at greater risk.

And so the latest large-scale procurement of essential goods for the health system has been mired in the now familiar practice of paying too much (to the wrong people) and getting too little in return.

NHI seeks to fix inefficiencies and resource imbalances across the health system by allowing for procurement of services by the state, from public or private health facilities, at set prices. The same health services will be available to all and the state will enter into contracts with health facilities to provide services according to treatment guidelines.

In theory, it is a system that leads to equitable and efficient use of all the resources available, instead of leaving excess capacity in the private sector while the public sector remains crowded and under-capacitated.

In practice, the astonishing extent of the misuse of funds and exploitation of lax contracting processes during a global pandemic, has confirmed fears about our ability to secure the integrity of a health system based so directly on contracting and procurement.

While we have not heard much about NHI for the past few months, it is still very much on the table. Last week, the Parliamentary Portfolio Committee on Health debated the process it would follow for oral submissions on the NHI Bill. MPs heard that there were 32,217 hand-delivered submissions (of which only 1,031 had been scanned for review by members and only 100 have actually been reviewed for content); and a further 32,634 emailed submissions.

It is not clear whether any of the emailed submissions have been reviewed for content, other than to state whether the submission agrees or disagrees with the bill.

The fact that so little work has been done to review the submissions that were sent to Parliament in November 2019 (almost a year ago) raises serious questions about the likely engagement of parliamentarians with the substance of the views of South Africans on NHI. Despite this, the committee intends to hear, in October this year, the 121 organisations or individuals who requested to make oral submissions. The pressure is on to pass the NHI Bill.

Aside from showing the health sector’s vulnerability to corruption, the Covid-19 pandemic has in many ways shown the need for universal health care.

A pandemic shines light on our interconnectedness as people, across countries, neighbourhoods, and socio-economic statuses. A health system that can only cater to some, will fail all. While we did not see the health system overwhelmed like in some parts of the world, Nelson Mandela Bay facilities such as Livingstone Hospital were overrun during the peak of the pandemic in the province. The effective use of all the health resources for everyone makes intuitive sense in a pandemic and should make sense in general.

How then, given the vulnerability of our health system to corruption and maladministration, can the population be convinced to support a massive shift in the operation of the health system that will divert all health spending to a single fund for procurement of health services for all?

The answer must come in the establishment of strong governance systems from the start – and in transparency in all decisions.

The NHI Fund, as it is currently envisaged in the NHI Bill, is overwhelmingly reliant on the Minister of Health to appoint the Board, the Chair, the CEO and the various advisory committees. The minister even appoints members of the Stakeholder Advisory Committee.

In simple terms, decision-making power is far too concentrated. Centralisation creates weakness and opens systems up to abuse. It is unnecessary, given the legal structure of the NHI Fund, for so much power to rest in the minister. It does not make them more accountable. It makes all health funding and decisions subject to the control of one person.

Calling for better governance structures is not meant to cast aspersions on the current Minister of Health or the government. Laws are not made for specific people, but should be made to withstand the worst possible scenarios.

Good governance must be the central pillar of NHI if it is to overcome the public’s fears of corruption and maladministration.

To increase public trust in the NHI and to reduce the risk of corruption under NHI, it is also imperative that all NHI-related processes and decisions are as transparent as possible. This requires specific provisions in law to guarantee such transparency.

Convincing a corruption-embattled population to trust a centralised and procurement-based health system becomes more difficult with each graft scandal. But the reform of the health system to create equity and ensure quality is needed now more than ever.

Strong governance and transparency are the minimum requirements for a trustworthy NHI. Parliament must demand provisions in the NHI Bill to meet these requirements if we are to protect the integrity of the new system – and if the public is to have any trust in the health system and those who run it. DM/MC

Sasha Stevenson is Head of Health at SECTION27.

Note: The author of this op-ed is an employee of SECTION27. Spotlight is published by SECTION27 and the TAC, but is editorially independent, an independence the editors guard jealously. Spotlight is a member of the South African Press Council.