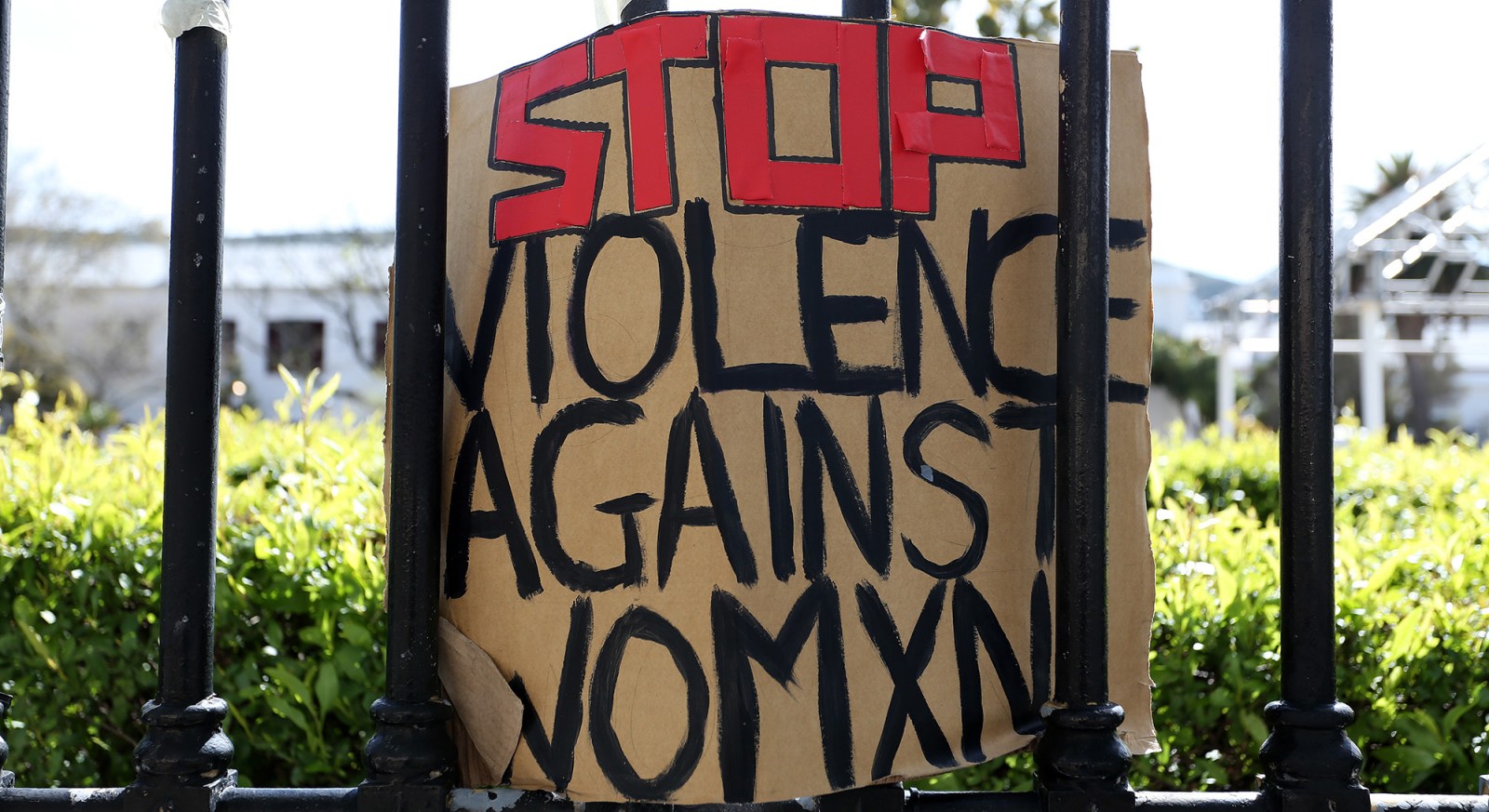 South Africa is fighting three pandemics, says President Cyril Ramaphosa. But for now, the country seems to be making some progress against only one of them.

Pain and politics were combined in an evening-long summit on gender-based violence and femicide on Friday night aimed at men and organised by the ANC in the Western Cape. If endurance is a measure of commitment – the Zoom summit was more than four hours long – then-President Cyril Rampahosa, Northern Cape Premier Zamani Saul, and a number of other ANC leaders really want to see the scourge defeated.

The Zoom summit was held in honour of the late ANC MP Hishaam Mohamed, whose sudden death from a heart attack last month aged 55 came as a shock. Mohamed had pioneered legislation in Parliament aimed at gender-based violence.

Men made commitments to doing better, some even apologising for the behaviour of their gender, but there were also heart-wrenching stories by women who have been let down by the system and by government promises.

There was Zelda van Wyk, the mother of eight-year-old Tazne who was raped and murdered earlier this year. Van Wyk said her family was due to get a Wendy house after Ramaphosa had promised them that their family’s living conditions would be improved. The court case was also not running smoothly and Van Wyk complained of insensitive treatment by the police.

Ramaphosa said he was shocked to hear Van Wyk’s story, and apologised for the way government officials had failed her after his promises:

He promised that Olive Shisana, his adviser on social policy, who also serves on the not-so-interim Interim Steering Committee on Gender-Based Violence and Femicide, would look into the case.

There was also the mother and grandfather of a four-year-old girl in Moorreesburg. The mother said her little girl had been sexually abused by a cleric, but despite solid forensic evidence, and allegations that the cleric had abused a three-year-old as well, he has yet to be charged.

The grandfather said: “At the magistrate’s court the local prosecutor said, we won’t prosecute, and he said the child was too small and maybe played with herself, so we will not prosecute.”

Claudia Roodt, a social worker, spoke from her personal experience of system failure, about how she had been unsuccessful in obtaining a protection order against an abusive partner because officials would only give it to her if she was physically abused.

There was also politics. Former deputy minister Mduduzi Manana – who himself was convicted of assault after an incident with three women at a nightclub in 2017 and who now regards himself as “a reformed perpetrator” who wants “to make a contribution”, said it was important to raise boys well and that men should lead a campaign to protect and value women. There was a power cut in his area, and his face was barely visible in the dark.

Police Minister Bheki Cele said women don’t need men’s protection because that implies possession, and “women are not our pets”. He gave figures of how more women were raped in their homes by men they know rather than by strangers. He did not respond to a speaker who said the conversation should be about perpetrators, not victims. Deputy Justice Minister John Jeffery said gender-based violence “is a big crisis, a big problem” – a second pandemic.

Ramaphosa went one further and said it was, in fact, a third pandemic, with Covid-19 and corruption being the other two. The ANC should lead in the fight against two of these – corruption and gender-based violence/femicide, Ramaphosa said.

“We need to go back to a culture of community to defeat these pandemics,” he said, likening it to the “tried and tested tactics” used before 1994 in the struggle against apartheid, when there were street committees with information on what was happening in the community.

“Men need to stand up and work in partnership with the women in our country in combating gender-based violence and femicide through confronting patriarchal norms and attitudes.”

Ramaphosa apologised to women on behalf of his gender, like some other speakers before him, “for what the men continue to do to them”. Men abused women physically, economically and psychologically, he said. “We have to fight [femicide] like we are fighting to defeat a virus.” He said men should speak out against each other and report other men to the police for abuse.

Ramaphosa said while violence against women was a problem that required a response by the whole of society, the government “must put in place an effective legal system that protects victims and survivors and allows for appropriate sentencing of perpetrators”. He said boys and girls need to be taught non-violent methods of resolving conflict and that men need to check their “impulses to subconsciously reinforce patriarchal attitudes”.

He praised non-governmental organisations for standing up “very firmly to raise the level of consciousness” about it. Ramaphosa also responded to a speaker raising the issue of police brutality and the death of Nathaniel Julies, saying he regretted that this (the killing of Julies, allegedly at the hands of the police) had happened.

Ramaphosa has championed the fight against gender-based violence ever since he became president in February 2018, and also on the continent during his year as African Union chair, but progress since the Presidential Summit on Gender-Based Violence and Femicide in November of that year has been slow.

While the ANC has been true to its word in punting gender equality in leadership positions – it has a 50% quota for women – LGBTQI activist Patsy Alley said this wasn’t enough.

“We are failing to address violence and patriarchy within the [ANC] movement,” she said, adding that there was a jobs-for-sex patronage system within the party, on which party leaders were generally silent.

There’s also violence being committed against women leaders, who now sit at the table, she said, but whose voices “don’t count for as much”. If the ANC can’t solve this problem of discrimination and violence within the movement itself, “how do we solve it in society at large?” she asked.

Ramaphosa responded: “We must change our mindset about traditional stereotypes” and the ANC should use “this Covid moment” of webinars and extend the conversation to other provinces so that the “meaningful dialogue” could be extended.

Ultimate success does not lie in talking, but in how much the ANC – and society in general – is prepared to do about a problem. DM/MC