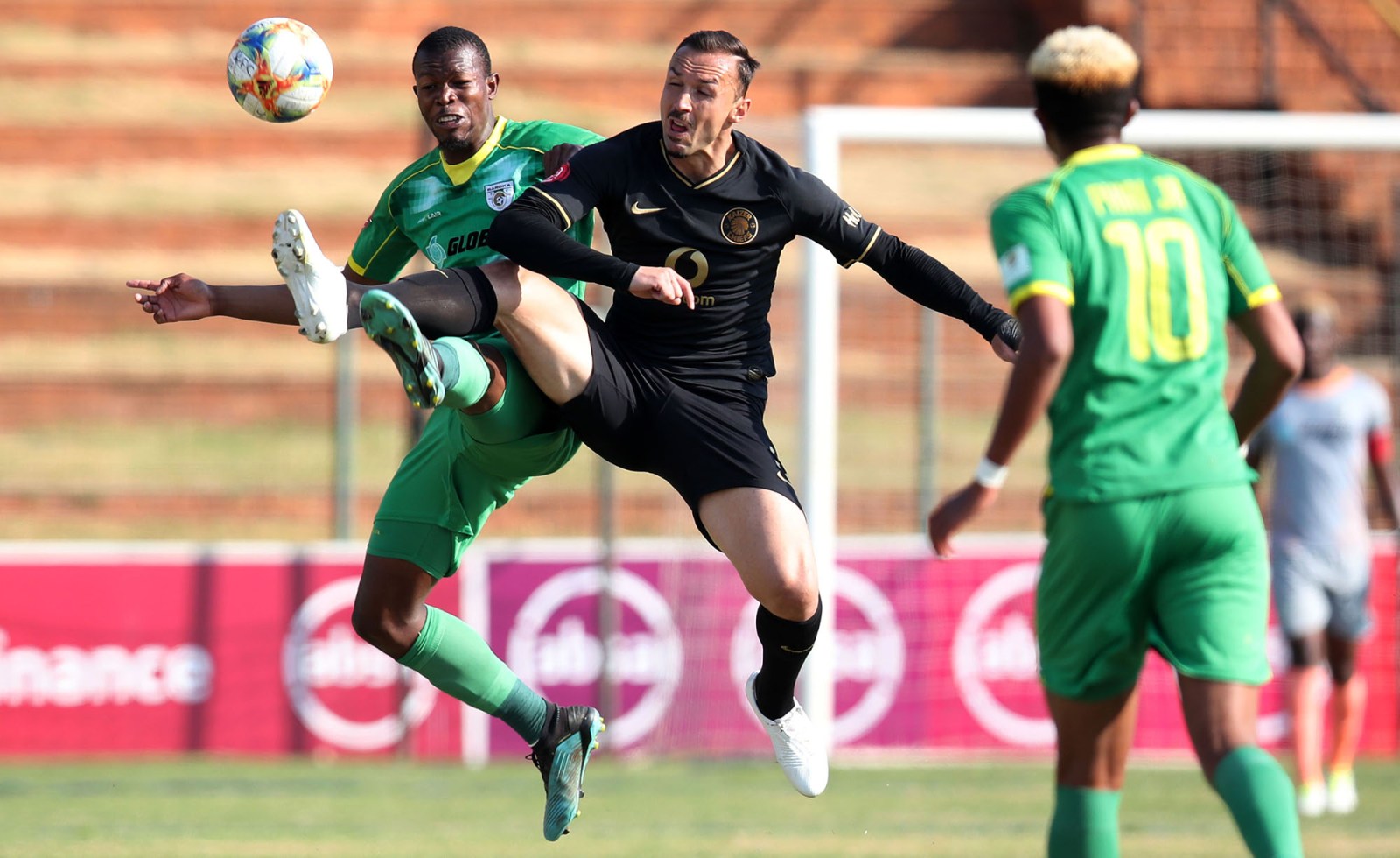 Samir Nurkovic of Kaizer Chiefs is challenged by Vusi Sibiya of Baroka during the Absa Premiership match between Baroka FC and Kaizer Chiefs at Bidvest Stadium on 5 September 2020 in Johannesburg. (Photo: Muzi Ntombela / Gallo Images / BackpagePix)

Mamelodi Sundowns’ last-gasp title victory will go down in South African football history as one of the most surprising, especially when one considers the comfortable lead Kaizer Chiefs once enjoyed over their rivals at the summit of the log.

After a 13-month-long season, five of those months being taken up by a Covid-19-induced break, the Absa Premiership culminated in tears and heartbreak for runaway leaders Kaizer Chiefs. Having led for 28 of the 30 matchdays, Amakhosi were edged out by Mamelodi Sundowns.

How did Chiefs lose out to a Sundowns team that had to juggle five competitions this season, including the gruelling Caf Champions League, and the MTN8 – which Chiefs missed out on after finishing in ninth position the previous season? These are the questions that will still be going through the minds of everyone affiliated to Amakhosi.

The two title contenders headed into the final day of the season level on 56 points. The only thing that separated them was goal difference, with Chiefs boasting a difference of +21 in comparison to Sundowns’ +18. Amakhosi knew that a win would all but guarantee them their first piece of silverware in five years.

However, Pitso Mosimane’s men beat Black Leopards 3-0 on Saturday, while Chiefs could only draw 1-1 with Baroka. That meant Sundowns secured their third title on the trot, and their 10th overall in the Premier Soccer League (PSL) era, while Ernst Middendorp’s team ended their best league season (points-wise) in five empty-handed.

“In my career, I have so many beautiful memories. This is one of the trophies I will cherish for the rest of my life because it hasn’t been easy. At some point we were 13 points behind,” Sundowns captain Hlompho Kekana told SuperSport after their triumph.

“To be honest, Kaizer Chiefs played very well. They really deserved more than we did because at some point they were scoring non-stop and we were behind and trying to fight back and to win our trophy back.

“More than anything we are just happy we managed to win this trophy for the 10th time for Mamelodi Sundowns, and for me I couldn’t ask for more for the seventh time. It’s a moment I should be proud of in my journey. I still remember I first won it while at SuperSport United. Look at me now, it’s the seventh.”

The 13-point gap was established while Masandawana were still busy with their Champions League commitments, and it was reduced to 10 points in November 2019. Over the years, Sundowns have been a permanent fixture in the continental competition. However, Mosimane has always stressed to his players that games in hand don’t always equate to points.

His team made the games in hand count, though, as they began clawing back the deficit to Chiefs when they crashed out of the Champions League. And before the coronavirus pandemic hit South Africa in March, Mosimane’s men were just four points behind Chiefs with one game in hand.

Things started off on a flat note for Sundowns after Minister of Sports, Arts and Culture Nathi Mthethwa gave the green light for a return to competitive football in the country, after a five-month hiatus. Masandawana drew three and lost one of their first four games in the “bio-bubble”.

They then won their next two, the most significant being their 1-0 victory over Chiefs, which brought them level on points with Middendorp’s men, with just three games remaining in the season. Game on.

Chiefs started off similarly sluggishly in the bubble. In their first four games, they won one, drew two and lost one. Then came the crucial loss to Sundowns.

There were signs that they might have been struggling even before play was suspended, after they lost two of their three last games before the mid-March halt.

Another key statistic shows that having only conceded 12 goals in 23 games before lockdown, Amakhosi conceded 10 goals in seven games in the bubble setting. This tally was the joint most of any team in the bubble, level with the now relegated Polokwane City.

“I think you have to realise you do not win games just with the DNA of being a big club. You have to work for it, you have to push yourself at every minute‚” Middendorp said, bemoaning the events that led to their eventual position.

“That’s the reality in soccer and professional soccer. In the end, we had several games where I believe we could have done better‚ and then we are ending up like this.”

His opposite number, Mosimane, had no such hangover, lauding his team for their fighting spirit and savouring the victory after the chase.

“What a title to win. I think Mamelodi Sundowns… everyone knows we are slow starters and we leave it to the last. Last year we left it to the last and I hope next year we don’t do the same thing because it becomes a bad habit and we might not win it in the end,” Mosimane told the media after the game.

There is no time to celebrate just yet for Mosimane’s men. They now shift their focus to the Nedbank final on Tuesday. Victory against their fellow finalists, Bloemfontein Celtic, will see them secure an elusive treble, having also clinched the Telkom Knockout this season. DM