Child malnutrition breeds aggression and violence, and we will reap the bitter lockdown harvest 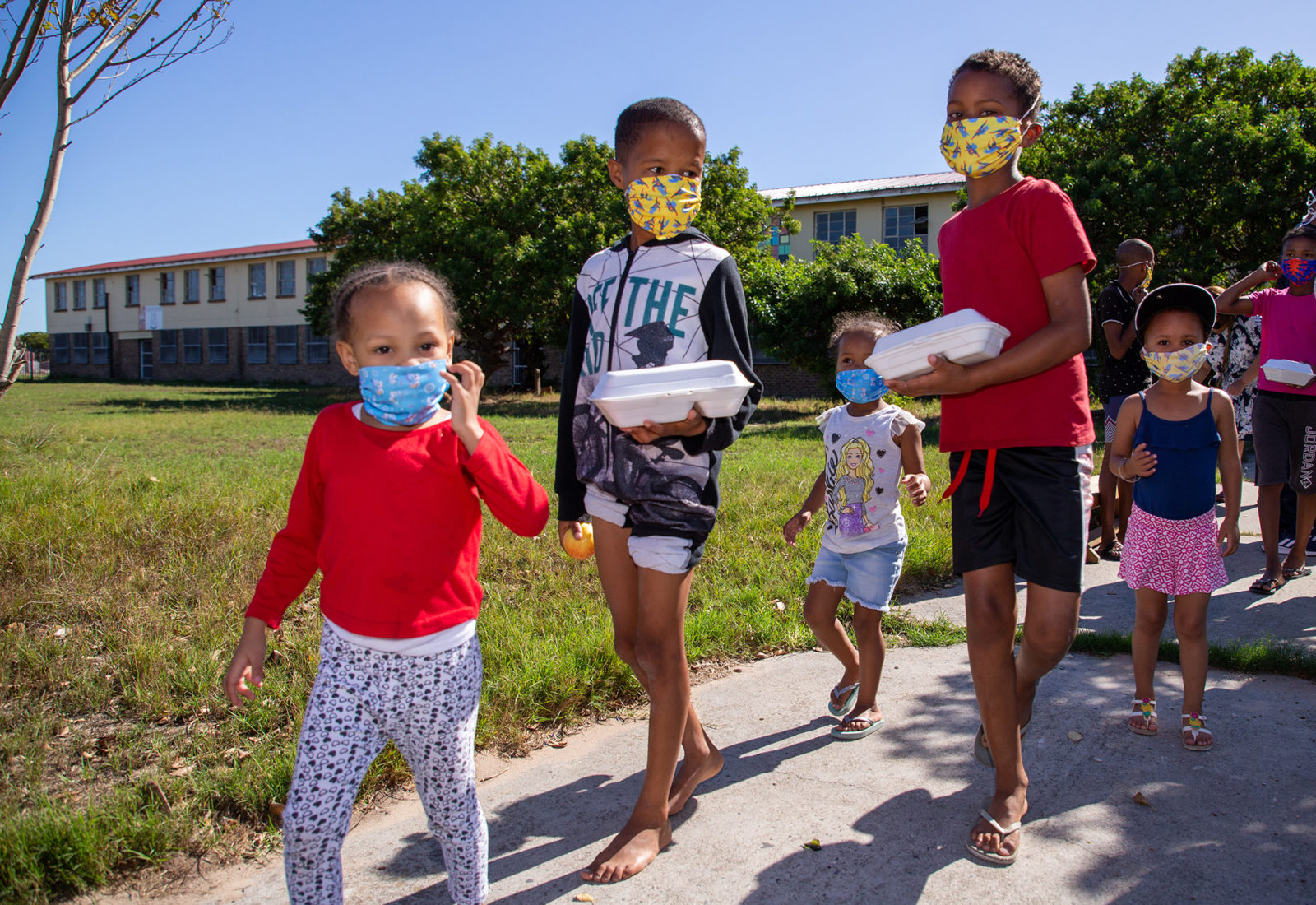 Children of all ages wearing face masks, receive some food during a feeding scheme at Excelsior Senior Secondary School in Belhar on April 28, 2020 in Cape Town, South Africa. Learners were encouraged to wear a mask and observe social distancing to minimise the spread of COVID-19. According to media reports, nationwide lockdown has put economic pressure on households and families across the country. (Photo: Gallo Images/Roger Sedres)

Multiple studies have exposed the link between nutrient deficiencies and violent or aggressive personality traits in children and adults. Food insecurity as a result of the Covid-19 lockdown makes it predictable that we are quite literally breeding a society of violent and aggressive adults.

Adverse Childhood Experiences (ACEs) are described as traumatic events experienced before the age of 18. An accumulation of adverse experiences are said to negatively impact on the development, social, psychological, and emotional wellbeing of an individual, impacting their capacity for healthy functioning in society.

Child abuse, deliberate neglect, parent mental health, poverty and household dysfunction are some of the elements of adversity that make up what is viewed to be a part of the ACE score. Notable, however, is that in each of the studies conducted on the effects of ACEs, food insecurity and hunger show up as a common thread.

Recent research into the micro- and macronutrients required for optimal functioning has shown that healthy brain development is fuelled by the intake of key nutrients, such as zinc, iron, omega-3 and amino acids. Studies have shown that deficiencies in these vitamins can cause disruptions in some of the most important elements of brain functioning and development in the prefrontal cortex, hippocampus and nervous system.

According to a paper compiled by the Centre for Social Development Africa, University of Johannesburg and the Teddy Bear Foundation, in 2019, research shows critical ages for exposure to malnutrition that are specifically associated with a predisposition to violent behaviour and aggression later in life. Stating that males born from mothers suffering from severe malnutrition during the first and second pregnancy trimesters had 2.5 times higher rate of displaying antisocial personality disorder in adulthood. Subsequent to birth, children who suffer from nutrient deficiencies at three years of age are proven to show greater antisocial, hyperactive and aggressive behaviours at ages eight, 11 and 17. This means that the type of nutrition passed on to a foetus in utero, as well as to a child in the first three years of life, can determine their characteristic and neurological functioning well into adulthood.

Improper nutrient intake and certain nutrient deficiencies, according to an article titled “Understanding nutrition, depression and mental illnesses” in the Indian Journal of Psychiatry, have also been linked to high levels of depression. The studies attribute a decreased intake of omega-3 fatty acids to rising trends of depressive tendencies. Tryptophan is an essential amino acid which is usually converted to serotonin and can induce sleep and tranquility, and people who experience a tryptophan deficiency might suffer from depression and exhibit aggressive behaviour.

South Africa has long been a country suffering from food insecurity and chronic hunger. However, over the years, the percentage of the population experiencing chronic hunger had actually declined. According to the figures from Statistics SA, these figures almost halved from 13.5 million people experiencing food insecurity in 2002, to 6.8 million in 2007. However, all this seems to have been undone subsequent to the Covid-19 pandemic.

Data from the 2020 NIDS-CRAM Survey show that 47% of participants reported that their household ran out of money to buy food during the month, and with each week that the national lockdown continued, hunger, poverty and food insecurity dug further and further into the reality of most of our country.

The national lockdown saw millions of South Africans losing their jobs as businesses, restaurants and retail outlets closed. According to data from the NIDS-CRAM Wave 1, about 3 million people lost their jobs between February and April 2020, with an 18% decline in employment.

Overnight, unemployment rates sky-rocketed, and the majority of South African families lost the ability to provide for their families and put food on their tables. As many began to starve and food insecurity grew, the threat of violence as a result of hunger increased.

When the national lockdown began and schools were closed, at a time when the need for aid and economic support was at its highest, the Department of Social Development put the National School Nutrition Programme (NSNP) on hold, leaving 9 million learners without any nutritional support while they were out of school, further increasing the financial burden on individual families and caregivers.

The NSNP was not the only programme to be suspended during lockdown, leaving millions to starve. About 235 community nutrition and development centres that supply regular cooked meals to those in need were also closed, leaving millions more scrambling for survival.

While people were poorer and hungrier than ever before, the nutritional value of meals shared between families decreased. A Grade 12 learner in Limpopo, one of the children whose affidavit formed part of the legal argument by Equal Education in the case to reinstate the NSNP, stated that “for the duration of May we had no food at home and my mother could only afford to buy bread. My mother had to ask for food from our neighbours, who gave us small rations of maize to cook.” Although mielie meal is a staple in the diet of South Africans, as a single meal ingredient, it contains none of the nutrients required to support healthy nutrition.

As well as increasing reports of community and interpersonal violence, rising cases of self-harm and self-directed violence are being seen among our youth and vulnerable adults, where nutrient deficiencies and dwindling prospects of survival are becoming more and more widespread. What we are seeing on the ground, and which is supported by research, is that hunger, malnutrition and high levels of adversity are also a large contributing factor to suicides and suicidal thoughts, primarily among males.

At the start of the coronavirus pandemic, national government promised to distribute food parcels to those in need. Jeremy Seekings, professor of Political Studies and Sociology at the University of Cape Town, states that the number of food parcels actually distributed only amounts to one-tenth of the number promised. Even more notable, however, are the contents of the food parcels and whether they properly address the nutritional needs of their recipients. Each food parcel distributed contains mielie meal, rice, tinned beans, tinned fish, peanut butter, oil, tea bags and sugar – key nutrients like dairy, sufficient protein, fruits and vegetables are missing. These missing nutrients are also major sources of zinc and iron, the nutrients responsible for staving off violent and oppositional behaviour.

A standard government food parcel contains food for two meals per day, for a family of four, for one month. However, whether there actually is enough food in these parcels to stretch this far has been debated, and even if two meals a day for a month are sufficient to keep people alive, it seems to be a far cry from doing much else.

As South Africa moved into national lockdown Level 2, on 18 August 2020, economic activities returned to operation, learners began returning to school and school nutrition programmes supposedly resumed. However, with unemployment remaining high, most of the population could take months or years before their financial stability returns.

If the research is correct, and malnutrition and chronic hunger have direct links to violence, aggressive behaviours and depression, should intervention services not focus directly on curbing these trends, perhaps by increasing feeding programmes and packing food parcels with enough food items that actually contain the nutrients required, instead of closing them when the going gets tough?

If we think about the millions of children currently within their early years of development during the pandemic, and we think about the damage the resultant food insecurity and chronic hunger has had on their functioning and brain development, it seems predictable that we are quite literally breeding a society of violent and aggressive adults.

If we want to curb these trends, we need to take a good, hard look at understanding the depth of the effect of food insecurity in our country, and the type of nutrition we are supplying to those who need it. Hunger does not only affect the hungry, but the functioning, development and capacity of our society as a whole. DM

Talia-Jade Magnes is director at the Shaken and Abused Babies Initiative/Babies Matter.