Ishtar Lakhani: An activist working to create the world of our dreams 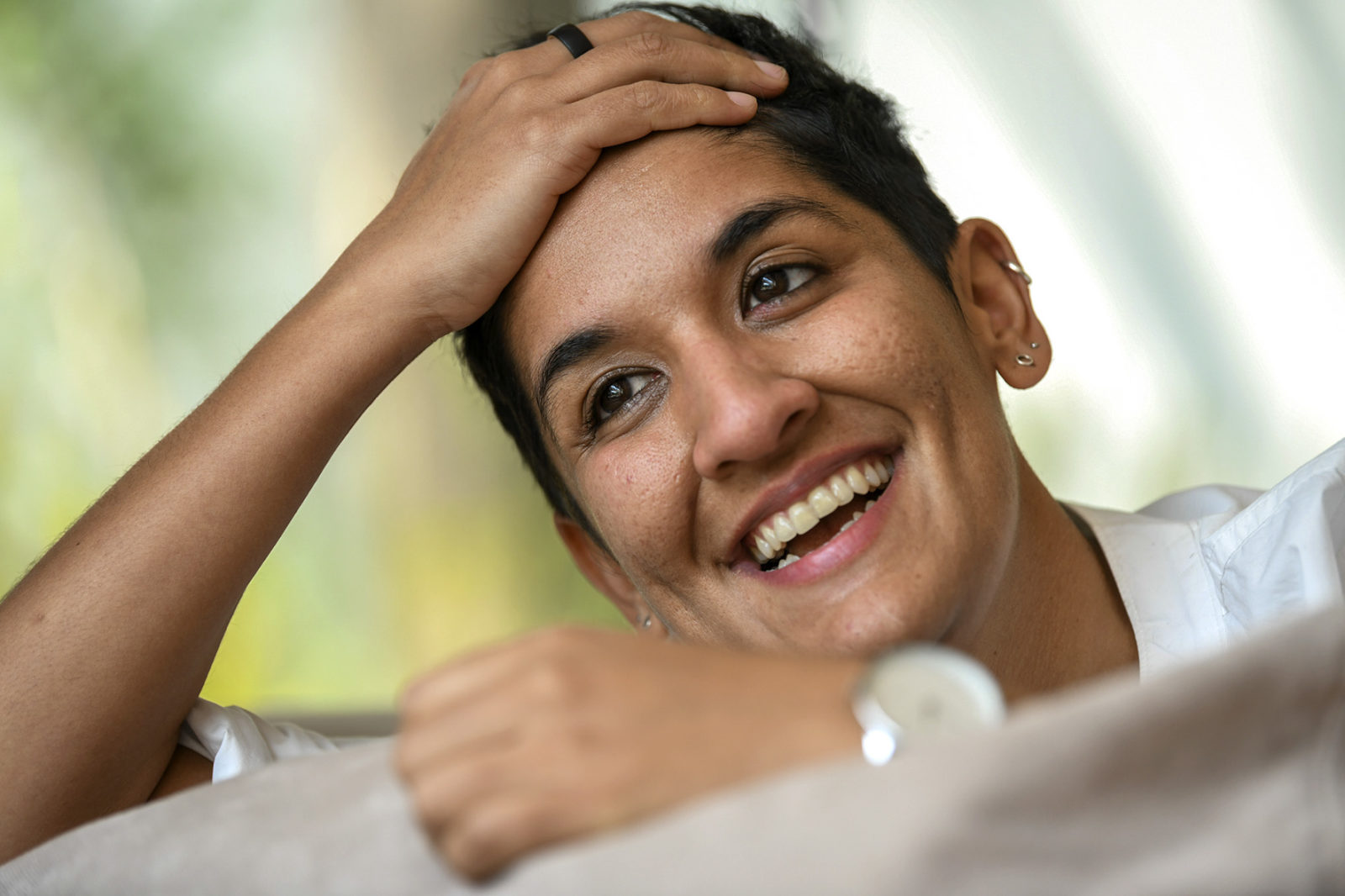 As a ‘card-carrying feminist’, Ishtar Lakhani knows that women have shown for generations that there is a better way of existing – and it’s her aim to help make a kinder, more compassionate world.

“I’m a human rights defender,” says Ishtar Lakhani. “What’s your superpower?” For the past year, Lakhani, 35, has worked as a “freelance troublemaker” associated with social justice projects around the world.

“It’s about approaching very serious human rights problems, and brainstorming unusual ways to get at them,” she says. “For example, we’re working with an organisation in Australia to create a real lifetime machine, so that people can go in and experience what it was like in Australia in the 1920s. What does that mean for women’s rights, and where are we now? And where do we need to go? In Venezuela we’re working with a bunch of lawyers who want to create a food truck, in order to go out into communities and give legal advice.”

From 2014 until 2019, Lakhani served as advocacy manager for SWEAT – the Sex Workers’ Education and Advocacy Taskforce – fighting to decriminalise sex work in South Africa.

As Lakhani speaks to Maverick Citizen over Zoom, a steady smile rounds off her sentences. She likes to laugh; her mission is to break new ground through creativity, humour and play – putting the “fun” in fundamental rights.

“Every superhero has an origin story,” she says. “Bruce Wayne, or Batman, was left orphaned after he witnessed the murder of his parents during a robbery. Princess Leia’s planet was destroyed by the evil Empire in Star Wars. These characters have something in common other than their shared desire for justice: they had a deeply personal experience that moved them to devote their lives to fight injustice.”

As a queer woman of colour, born in apartheid South Africa to a Hindu father and a Muslim mother, Lakhani says her own origin story is no different.

Born to Hajira and Ketan, Lakhani grew up in Clare Estate in Durban. Her brother, Bhaskar, is two years older.

“Growing up, my parents created this community,” she says. “As they were to a degree disowned from their own communities. Because, you know, a Muslim person marrying a Hindu person; my mother was disowned by her own family.

“The one thing I really appreciated is that my parents never had a children’s table. So when they had friends over for dinner, it wasn’t a case of the children having to sit by themselves. We were expected to have dinner with the grown-ups and to try to engage them in conversation. And I think it was from there that I actually learned the most.

“It was a community of diverse backgrounds; all involved with the anti-apartheid struggle in different ways. Because my parents worked in creative industries there was a lot of talk of protest theatre; there were actors, artists, human rights lawyers.”

Visiting her grandmother sparked Lakhani’s earliest recollection of a world at odds: “We would visit my grandmother’s house, my father’s mother, where it was very clear that I needed to go into the kitchen, to help, while my brother could sit in the lounge and just hang out. This was at a very young age. And I remember my parents having arguments with my grandmother, saying: ‘No, that’s not how it works in our household. It isn’t a case where Ishtar has to cook and clean and Bhaskar gets to hang around and live his best life.’ So I think I didn’t quite understand what was going on, but I sensed that there was tension.”

After matriculating from Westville Girls High School, Lakhani completed three degrees, including an MA in Cultural Anthropology from Wits University.

Today she speaks of “smashing the capitalist patriarchy”.

Folding her hands, she says: “I think you can smash the capitalist patriarchy with many different tools and using a range of emotions. I think you can use empathy to smash it. You can use kindness; you can also use anger. For me as a card-carrying feminist, I think women have showed for generations that there is a better way of existing. Not only in relation to each other, but in relation to our environment, in relation to our communities. An understanding of the world that is not grounded in capitalism, that is more grounded in community and relationship-building.”

Ultimately, she wants to create a kinder, more compassionate world.

Is it possible to make people kinder? She laughs.

“So, I think a lot of the time it’s difficult for people to have empathy,” she says. “People don’t understand what they don’t feel. So, for example, a few years ago, we [SWEAT] were in Parliament and one of the MPs was talking about something. And he used the term ‘prostitute’, which is not an acceptable term at all. It’s incredibly derogatory. And instead of us saying something to correct him, another MP nudged him and was like: ‘We don’t use that word. Sex worker, it’s sex worker.’ Obviously, this MP had been speaking to members of SWEAT. And for us, that was a huge win.

“It really is difficult work,” she says. “Getting up every day to do this is hard, but my optimism is helpful. Seeing change happen, slowly but surely. There’s always a sliver of optimism to be found.”

“So, I think it is possible to make people more empathetic by getting them to really engage in a way that makes them feel something, instead of just intellectualising issues.”

How does she tackle these weighty matters with humour?

“With difficulty,” says Lakhani, smiling again. “I mean, gender-based violence, racism, xenophobia; these are all incredibly serious and urgent issues. But I’ve always had a background in trying to use creative methodologies to try to explain a point, or to get a point across. This was one of the things that attracted me to SWEAT, they’re very cool and open to new ways of working.”

While being playful in her advocacy, Lakhani points out that she is well versed in speaking “social justice acronym” on conference panels, and in creating legal and policy submissions.

She adds that all evidence points towards decriminalising sex work in South Africa, despite authorities maintaining a moralistic opposition.

“I mean, you can’t copy and paste a model from one country to another country. But I think it’s really good to look at countries that have had the legislation for a long time to see what the impact has been. Like New Zealand. The idea is that sex work is treated as any other kind of work with the same regulations. So occupational health and safety rules have to apply, tax implications and social benefits. It’s about enabling sex workers to access their basic human rights.”

In Lakhani’s line of work, seeing the silver lining is key.

“It really is difficult work,” she says. “Getting up every day to do this is hard, but my optimism is helpful. Seeing change happen, slowly but surely. There’s always a sliver of optimism to be found.”

“The most amazing book I’ve probably read in the last year is called Octavia’s Brood; it is science fiction essays written by activists. The premise is that activists are doing science fiction. We’re trying to create a world that is not there, that is not in existence. It was wonderfully refreshing to read activists, envisaging worlds that we want to live in.

“I think, too often, activists are very good at saying what we don’t want. We’re very good at saying: this is unjust, that is problematic, this policy must go. But do we actually take a moment to really imagine what we would like the world to be like? What it smells like; what it feels like; how we engage with each other?”

Combining art and activism, creative passion and politics, is all in a day’s work for the freelance troublemaker, now based in Cape Town.

“This combination is something that I strive for, because when done just right, for a brief moment, we are able to create and live in the world of our dreams.” DM/MC