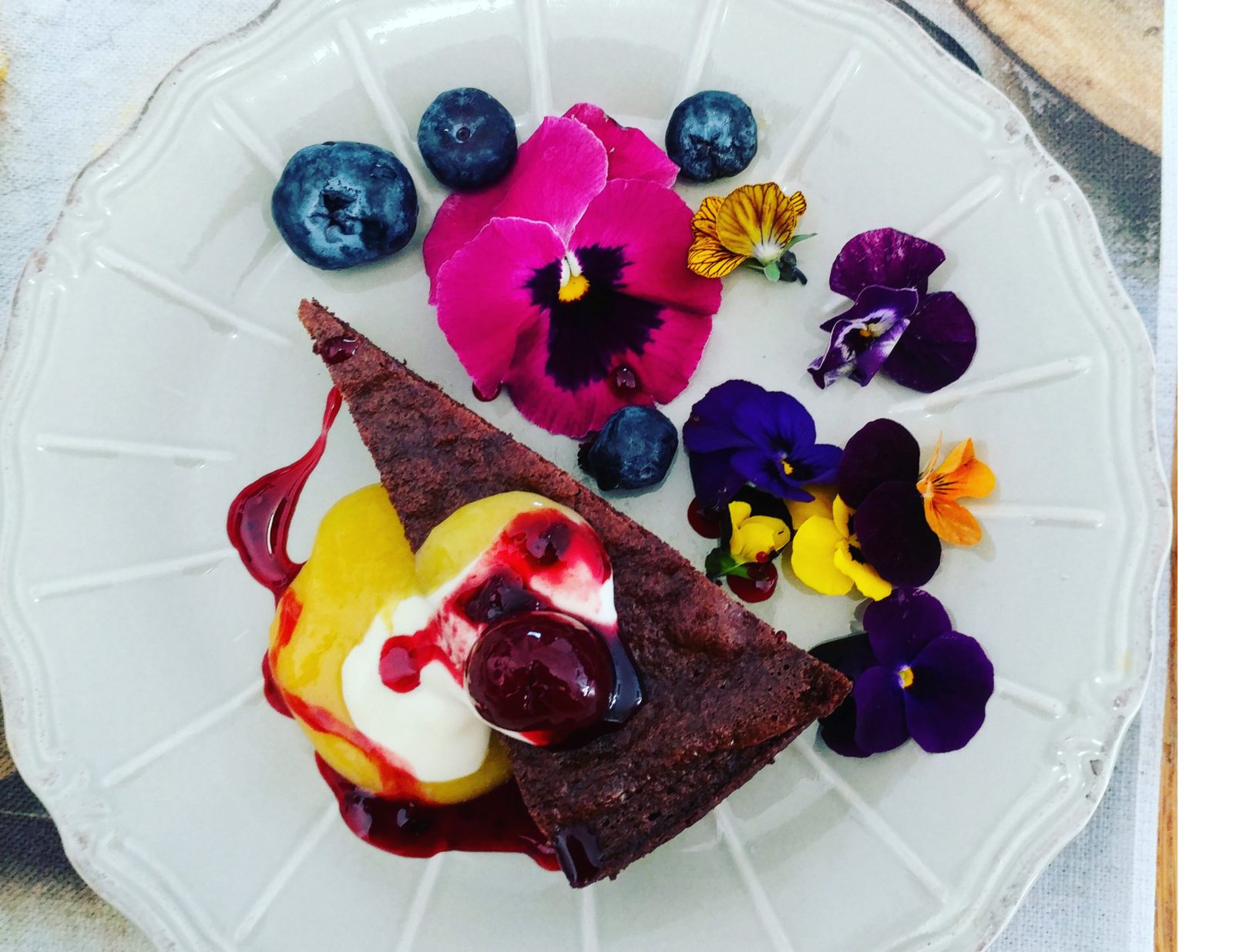 Lientjie Wessels is too tall to bustle so she sweeps across the still-dry garden, a crimson velvet pinafore-apron over her long grey cotton skirts. There’s cinnamon somewhere.

Lientjie Wessels, renowned artist, cook and ambience creator, says she likes to put people, food and things together. In Cullinan, the long yellow grass whispers rather than sings, leaning past us on the other side of the old railway line that runs alongside her garden fence. A big table is set on the stoep but we’re eating at one of the little tables under the shade of a banyan-like tree with an ever-spreading trunk and canopy. It’s a Moreton Bay fig and I wonder if we have our own name for it. “It’s just a wildevy.” (Wild fig.)

Ours and the other tables have veld plants in pots on them as well as a generous tablescape of little bowls and dishes, chunks of Belnori goat’s cheeses. These cheeses from Bapsfontein, just “over there”, have so far won 50 South African and 24 World Cheese Awards and been registered by the World Dairy Championships as being one of only 16 of the top international cheeses. That was four years ago and last year in Bergen in Norway Belnori was awarded “Best South African Cheese” as well.

We’re already relaxed, appetites rousing, masks folded, sleeves rolled up, stretching across the table from our garden chairs with their floral and checked covers. Around are just the sounds of the tall grass and the murmurs on the breeze of other guests in the garden, little clinks of glasses and cutlery.

A friend dips his toast into his wine as he loves to do on carefree occasions. He’s not Sicilian but it is Sunday and the act seems to carry associations of communion or even some odour of mafia sanctity. In any case, I like the smell of the yeastiness of the bread and wine but I am introducing a soft white goat’s milk cheese to a pickled strawberry on my messy plate.

Today’s menu is vegetarian, something we aren’t but there seemed no point in waiting for a meatier occasion. The tastes and colours and aromas of Lientjie’s food work across all diets, as I know from her book. I’ve been longing for a Lientjie Wessels meal for some time, having missed it when she and her life partner Robert, whose own life ended suddenly and recently, had their Cullinan restaurant Albizia.

Jack Russels rush about, playing fetch with a flat stone. Lientjie says they’re her klipkinders because out here they don’t have the fluffy toys of their pampered city counterparts. They scamper alongside the two young guys bringing out the next course.

These four-course Sunday lunches are something Lientjie began tentatively a little while ago and already they have waiting lists. She’s only been at this place for two months. It’s a new chapter in her life, as she sees it.

Queens Cottage, the biggest house in a row of smaller, white-painted  Cullinan railway houses, was probably called Postmaster’s House in 1905. Did he plant these very colonial trees? Did the seeds or fruit come by rail with some Australian equipment for the Premier Mining Company?

Already it looks like Lientjie made this place. And she has, in a way. All over the house, from the entrance area to her kitchen of wonders are the kind of colour-and-interest tableaux she seems to cobble together so enviably and easily. The rooms are filled with colour, particularly her favourites of bright red and saffron yellow.

The course on the tables is more turmeric yellow but undeniably picturesque in basalt bowls. It’s a spicy pumpkin velouté festooned with fried wild mushrooms and copious truffle shavings.

Lientjie’s food interests me particularly because of its “kontrei” aspect, where what she doesn’t make herself right here with ingredients from the local market and farmers, she buys in from local producers. Two of these producers are scientist women from Pretoria very nearby, who have this year released their first black truffles, carefully grown in a very controlled environment. It’s a phenomenal story for another day. But they and the cheeses come from Kontrei territory as certainly as do the pumpkins and other vegetables or fruit. Okay, there’s buckwheat coming up in one of the dishes and Lientjie simply says, “It’s what I already had.” And what about that regal wallpaper in Queens Cottage’s kitchen and living room? Turns out it’s local, designed by the same Hannes Koegelenberg who was the stylist for Geure, Lientjie’s food book.

The “kontrei” word doesn’t mean “country” but a surrounding area, like the French le pays. It’s the sort of general familiar surroundings, the places for which people become homesick when they leave. That’s central to Lientjie’s food. The influences and general style are local though their construction and recipes are her very own with which to play. Strangely there aren’t that many “kontrei” cooks in South Africa. So many chefs cook food and ingredients all or largely from somewhere else, apart from truly rural cooks.

Local ricotta and local root vegetables arrive in the form of a kind of savoury cake with juicy, jewel-like salads. The beetroot in the dish also gives the bake a gorgeous, richly studded appearance. While we look around, still a little transfixed by the beauty of the food, we spot a Jack Russel in mid-lift of the leg over a black handbag lying near one of the tables. The two at the table are in deep conversation only to be interrupted by the arrival of their dessert.

It is an intensely dark chocolate torte made with that rich, earthy buckwheat imposter and strewn with a flurry of edible flowers. I’m sure the Asian buckwheat can visit the kontrei more often, it is that apt in its new-dessert chocolate companion role. And chocolate for that matter comes from somewhere else in Africa.

This little spot on our continent, marked by an Australian wildevy, next to the old railway line built by the Cullinan Premier Mine, is where Lientjie Wessels is creating her new paintings of metamorphosis, putting her “people, food and things together” with her magnificent sense of drama and deliciously unique taste. DM/TGIFood