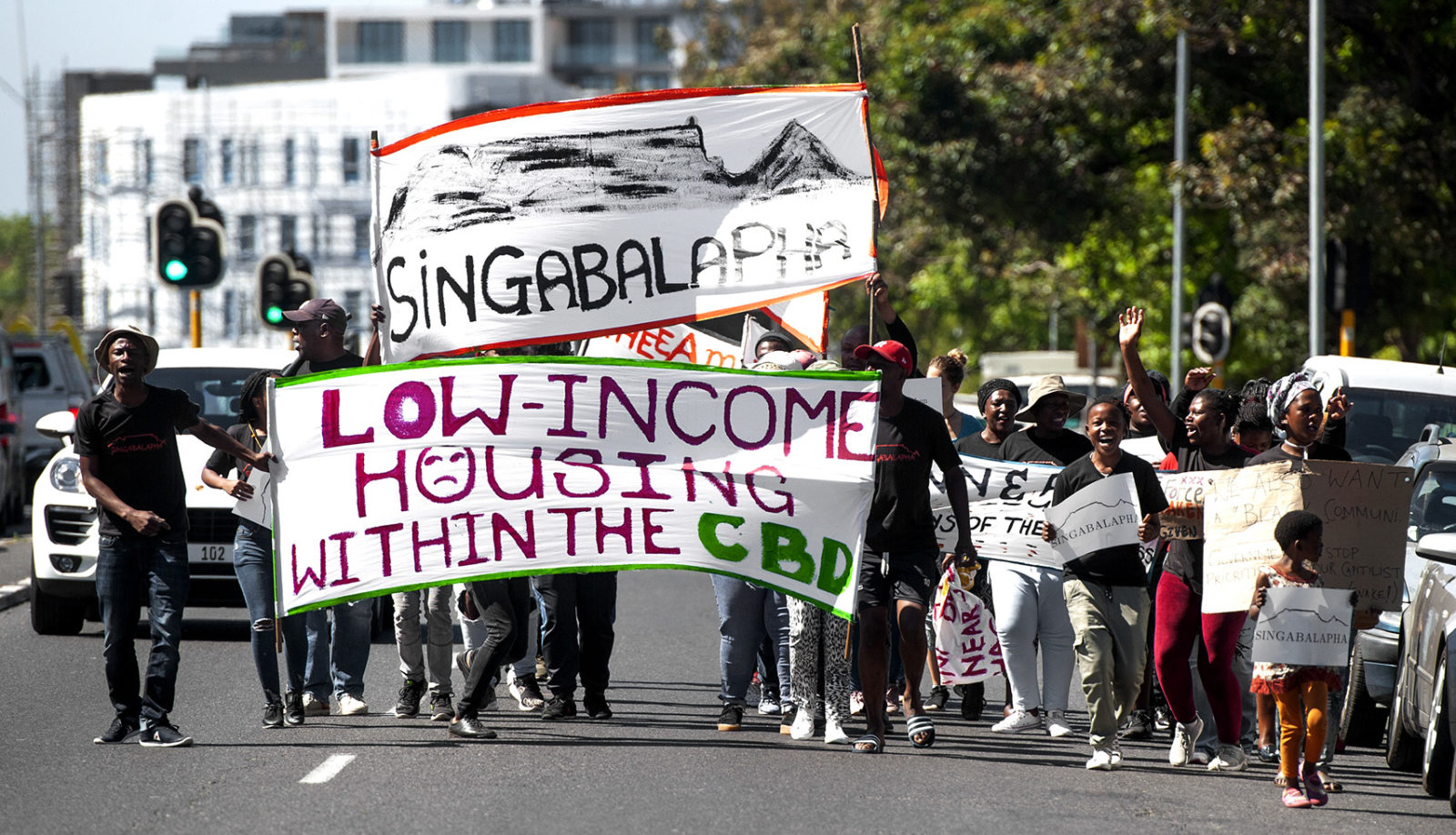 Backyard dwellers protest under the banner of Singabalapha, demanding accommodation after they were evicted from Observatory’s Arcadia Place building on 15 October 2019 in Cape Town. (Photo: Gallo Images / Brenton Geach)

The activists say that the City’s land policies and spatial development disadvantage anyone who is not white. They also say that the City is victimising homeless people and criminalising their attempts to find land and shelter.

A group of civil society activists has written to the City of Cape Town regarding what they say are violent and illegal evictions being carried out by the City, specifically in Driftsands, Hangberg, Vrygrond, Observatory, Silvertown, Mfuleni, Witzenberg, Factreton and Woodstock. This comes after months of the City clashing with informal settlement dwellers, accusing them of “land invasion”, the most publicly reported eviction being that of Bulelani Qholani who was forced out of his shack naked.

The activists are calling for the abolition of the City of Cape Town’s law enforcement unit, the release of public land to house the poor and the enforcement of the evictions moratorium.

The group says that the City’s land policies and spatial development are on racial lines that disadvantage anyone who is not white. They also say that the City is victimising homeless people and criminalising their attempts to find land and shelter as an alternative to homelessness. Reminding the City of everyone’s right to housing, they invoke chapter 26 of the Constitution which states:

The activists say the City of Cape Town’s Metropolitan Police Services Department, which has been conducting evictions, has been declared a rogue unit by Minister of Police Bheki Cele, thereby making it illegitimate. Attempts to engage the City managers have been unsuccessful, say the group and they have vowed to continue to “struggle for the right to live equally and fairly in this city and in this country.”

Below is the letter from the group:

Our struggles for land and housing continue

* This article was written by a group of activists from the movements listed below during a six-week process hosted by Tshisimani Centre for Activist Education and the Anti-Repression Working Group of the C19 People’s Coalition.

We are people in ongoing struggles for land and housing in the City of Cape Town and its surrounding areas in the Western Cape. We come together outside of political parties and narrow interest groups to write a response against a new wave of brutality from the City’s managers.

We stand together against the violation of Bulelani Qholani in Khayelitsha, and the many others that have been humiliated and put down by the evictions and threats to evict in Driftsands, Hangberg, Vrygrond, Observatory, Silvertown, Mfuleni, Witzenberg, Factreton, Woodstock, in Communicare buildings, on farms around the city, and in other areas. We stand against the strategies used to evict us, especially the use of Law Enforcement to shoot at us, break down our houses, and steal our materials.

The City’s managers who continue to serve the interests of the rich and white residents of Cape Town have put out a series of statements in which they call us criminals for demanding the right to land and housing. They call our occupations “illegal”.

They try to tell our stories as if we are “land-grabbers” and thieves. But the land we are on is under dispute. Who are its rightful owners? To whom does this land really belong? After 400 years of colonial and apartheid dispossession, who are the thieves in this story? You cannot “steal” land that was illegitimately taken, that remains captured by a minority white elite that have turned land into property, property that draws hard lines to keep black people as permanent visitors in the country of our ancestors.

What the apartheid city did with racist laws, the post-apartheid City does with the defence of property. Does the City management have any idea what it is like to have no money for rent, to spend your last money on materials to build a shelter, only to have your shelter torn down and the materials ruined by people who are supposed to protect you?

We cannot stand in line when the line is so long that we cannot see the end of it, when the national minister of housing says that there will be a limit to housing provision. We are afraid that our houses will be the coffins in which we are buried, and that our children will have nowhere to sleep but on the street.

The City managers and the national government say that they will not come and speak to us, that they will not negotiate with us. They will just send their police and private armies to destroy our lives and belongings. What kind of government refuses to talk to the people they are supposed to represent? If we have committees and leaders that can speak on our behalf, why should they not be engaged? Who should the government serve and protect if not the most vulnerable members of this society? Do they only speak with property owners who give them rates? Is this a country where you have to buy your way into citizenship?

They say the land we are occupying is “earmarked” for other things like schools, recreational facilities and nature reserves. But if these are so important, why was the development not already under way? Why is there always an excuse for denying people land and housing? How are our people supposed to go to school or enjoy a nature reserve if there is no house to live in? The Constitution of South Africa (section 26) states that the government must provide decent housing, and must protect against eviction. The opposite is taking place in this city: deliberate and organised aggression is being used against us for creating our own housing when the state has failed in its duty.

In order to get around the regulations on evictions, the City managers are increasingly trying to find ways around anti-eviction legislation. They are trying to increase the bylaws regulations to allow their police to remove people from public spaces without having to go through the courts. Currently, they are trying to push Singabalapha residents out of Observatory using bylaws that turn poor people into criminals. We are fighting them in court on this strategy, showing how the managers of this City want to take us back to apartheid policies.

When Minister Bheki Cele came to the press conference we held outside of Bulelani Qholani’s shack, he said the City of Cape Town’s metropolitan police force, known as Law Enforcement, is a “rogue” police force that is acting beyond its mandate. Even Cele, a minister renowned for his reckless use of SAPS against the poor, disapproves of Law Enforcement because it does not fall under the oversight of the Independent Police Investigative Directorate (IPID).

We have noticed that City managers are spending more of our money on buying military-style weapons and vehicles to build their urban army against the poor. They send Law Enforcement wherever black people are challenging the status quo, like outside the gate of the Cissy Gool occupation in Woodstock. They send Law Enforcement to humiliate us, like in Xakabantu, where we were taken sleeping from our beds, our food spilt and paint thrown on our clothes.

Law Enforcement, working with the Anti Land Invasion Unit and sometimes private security, is the sharp end of the stick the City managers use to put down our lives and struggles, to keep us in our place. They are committed to the dirty work of keeping black people away from the wealth and resources of the City, sending other poor black people with guns and stun grenades, armoured vehicles, with pending new stop and search laws, to keep us down.

They say the use of LE to fight occupations is drawing policing away from communities in need. This is a strategy to confuse and divide us. When have the police ever helped the black majority of this City? When has there ever been a serious effort to change the root causes of violence that create the highest rates of murder and crime in the country? Police are a weapon of the ruling elites to ensure that the City does not change its character, does not confront its founding colonial violence. If we allow for more of the City’s budget to be spent on policing, we will be strengthening the racist inequality in which we all live.

We ask: Who is the City of Cape Town if not the majority of its residents? Who are the rightful stewards of this land? In whose name and in whose interests do the managers of this City speak and act? This is the only city in South Africa that has not had its downtown area transformed after 1994 by black residents. We have been kept out by security and by property prices, which continue to create apartheid in our daily lives.

Our call to action

We come together in unity, and with a call to action:

We will continue to struggle for the right to live equally and fairly in this city and in this country. We carry forward 400 years of resistance to colonial land theft.