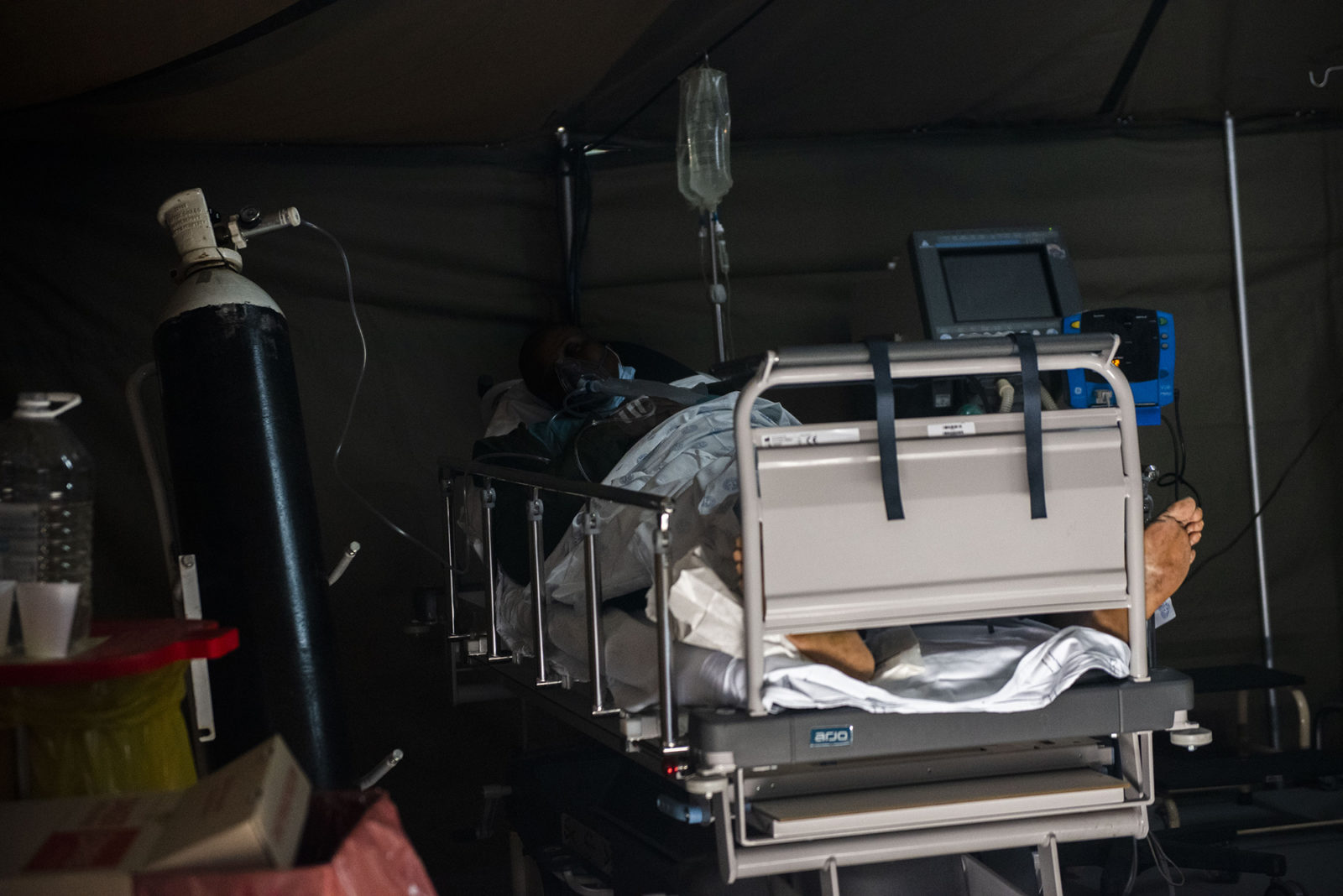 A patient in a tent dedicated to the treatment of possible Covid-19 patients at the Tshwane District Hospital in Pretoria on 10 July 2020. (Photo by Gallo Images/Alet Pretorius)

Every evening during the early days of the pandemic, people opened their windows at a set hour to applaud the heroic women and men who were putting their health on the line in the fight against Covid-19. In New York, London, Madrid and other cities, it became something of a ritual. For me, it was a daily reminder of those invisible workers, the public health professionals who battle the pandemic behind the scenes. It was also a reminder of how now, more than ever, we must invest in public health.

In a few short but seemingly endless months, an infinitesimal and invisible force has brought even the wealthiest and most resourced countries to their knees.

The power of the novel coronavirus to shut down human activity has been so great that seismologists registered a decrease in the vibration of the earth. The human toll has already been devastating and, in the few minutes it takes to read this article, Covid-19 will almost certainly claim more lives, particularly the lives of the most vulnerable.

Did this catastrophe need to happen? The answer is no. If only we had prioritised public health, we might have been able to stop this epidemic in its tracks. As the first cases were identified in various countries around the world, it fell upon public health systems to go into action. Yet, many simply did not have the means to do so.

Going into action means being poised to mobilise surveillance systems to be able to detect and count cases; to put in place ways to effectively isolate cases and quarantine contacts; and to ensure that overarching epidemic prevention measures are implemented and scaled up.

Such rapid, co-ordinated action at scale would have made an enormous difference in stopping the virus early, and it would have saved many lives.

But the capacity of public health resources to meet the demands of the early critical containment phase was quickly overwhelmed. In the US, for example, this calamity can be directly attributed to the failure to invest in what it takes to safeguard its people.

With the advent of Covid-19, this disinvestment in public health has proven to be a serious liability, with profound repercussions and deadly consequences. Unfortunately, the situation in other countries around the world, including in low- and middle-income countries, does not differ. Investment in putting in place the foundations on which epidemic preparedness and response must rest is often not sufficiently recognised.

Despite its profound successes, public health is rarely in the spotlight. In the absence of a raging epidemic like Covid-19, this bulwark against such threats is rapidly forgotten. But in good times and bad, it is public health on which we depend to maintain and improve the health of populations.

From putting in place systems for the collection of data on health outcomes, researching disease and injury prevention, and detecting, preventing and responding to infectious and non-communicable diseases, public health puts science and data to work at the community level.

Even when there are no epidemics in sight, the benefits of a strong public health system are clear.

Globally, these investments demonstrate even greater impact. A recent study showed that three basic public health interventions – scaling up treatment of high blood pressure to 70%, reducing sodium intake by 30% and eliminating the intake of artificial trans fatty acids – could save 94-million lives in 25 years. Moreover, these interventions prove to be extremely cost-effective. For example, reducing sodium intake by 15% has been estimated to cost less than $0.40 per person per year in low-income countries.

But when an epidemic threatens, the dividends paid by a strong public health system investment skyrocket. This is because public health gives us the means to anticipate epidemics before they occur. And when an infectious disease does spread widely, public health provides the tools to identify the epidemic and monitor it, as well as the means for reaching into communities.

Alarmingly, the US Centers for Disease Control and Prevention has noted that more than 70% of the world remains underprepared to prevent, detect and respond to a public health emergency.

Even as deaths continue to accumulate and health officials scramble to procure masks, oxygen and ventilators, we are beginning to see a glimmer of light at the end of the tunnel.

There is increasing evidence that mitigation measures put in place, such as movement restrictions, mask-wearing and physical distancing, have been making a difference in some epidemic hotspots. Eventually, successful treatments and vaccines for Covid-19 will be developed. However, until then, it is public health that is limiting the damage, flattening the epidemic curve, and buying us the precious time we need to understand this virus and how to tackle it.

At the same time, we must remain cognisant of the cost of these measures. Indeed, we must not ignore the disproportionate impact of Covid-19 on certain populations, whether they be racial/cultural minorities in the US, migrants and displaced people, or the poor around the world. For those with limited resources, population restrictions come at a high price. Having the systems in place to measure these effects at a population level and to inform interventions to mitigate them is of paramount importance.

The good news is that as the pandemic evolves, we are seeing a new appreciation of public health. The recently launched Africa Centres for Disease Control and Prevention is an important step forward. In addition, the current crisis has made evident that epidemics know no borders. An outbreak in any one region or country is a threat to all, and a strong global public health investment is our best defence.

People are coming to understand what epidemiology can contribute, how case-finding and contact tracing works, and the importance of paying attention to the evolution of the epidemic in their communities, as well as how various control measures are working or not working. Increasingly, there is a greater understanding of the distinction between public health and healthcare, recognising the importance of both.

When we emerge from this crisis, let the memory of people banging their pots, blowing their horns and applauding from their windows for healthcare workers inspire us to invest seriously in public health – for the sake of our generation and generations to come. DM/MC

Dr Wafaa M. El-Sadr, MD, MPH, MPA, is founder and director of ICAP, a global health centre based at the Columbia University Mailman School of Public Health working extensively in sub-Saharan Africa, and a professor of epidemiology and medicine.

This article is based on an address delivered by Dr El-Sadr at a virtual symposium on Covid-19 in Africa. Daily Maverick is a media partner to the symposium.