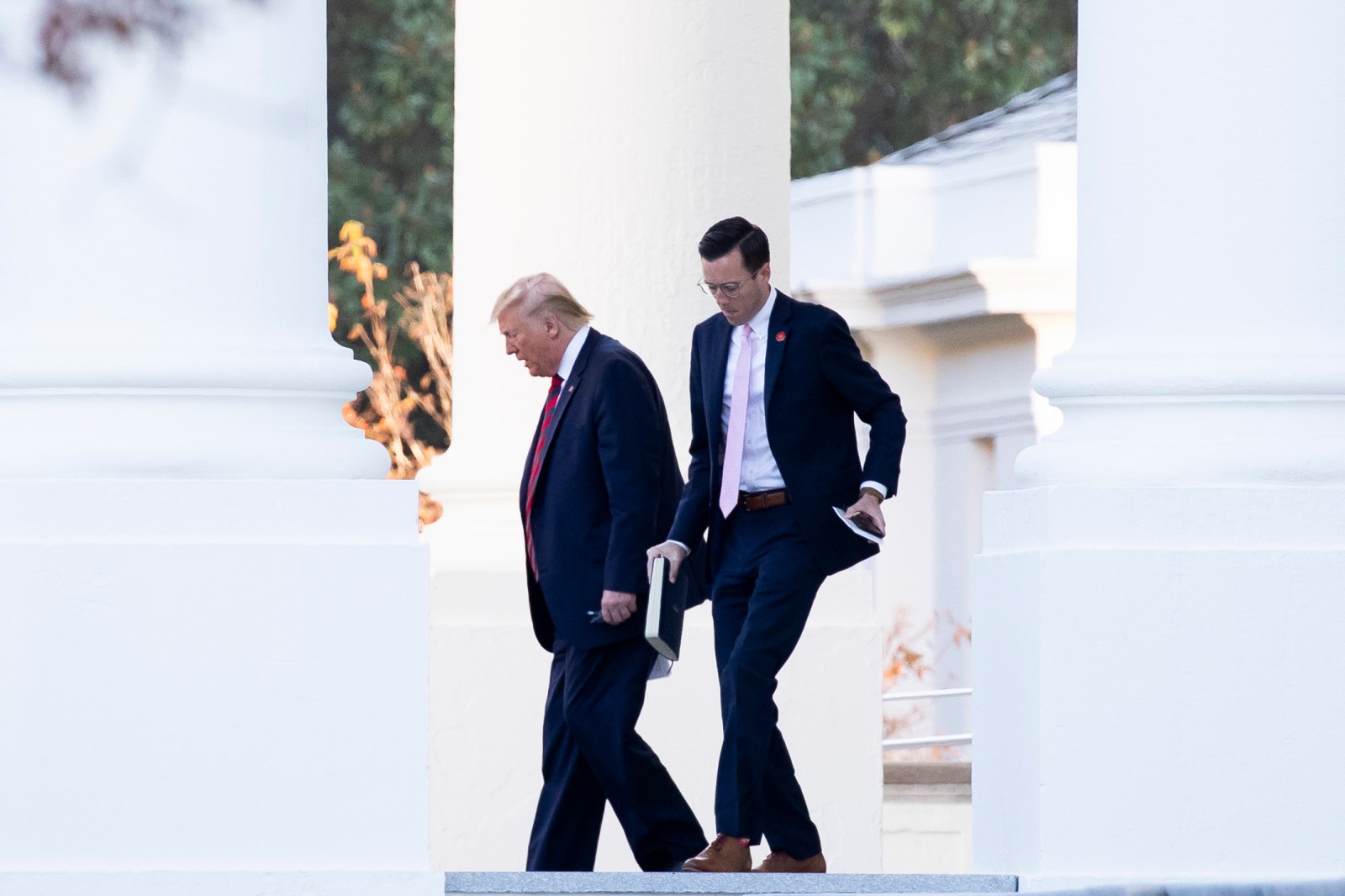 US President Donald J. Trump (L) and Special Assistant to the President and Deputy Press Secretary Judd Deere (R) depart the North Portico of the White House before entering a motorcade in Washington, DC, USA, 28 October 2019. Trump travels on a day trip to Chicago. EPA-EFE/MICHAEL REYNOLDS

WASHINGTON, Sept 1 (Reuters) - The White House on Tuesday pushed back on concerns expressed by the World Health Organization (WHO) after a U.S. health official said a coronavirus vaccine might be approved without completing full trials.

The Washington Post newspaper reported that the administration of President Donald Trump will not join a global effort to develop, manufacture and distribute a coronavirus vaccine because of the involvement of the WHO.

About 172 countries are engaging with the WHO’s COVID-19 vaccine plan to ensure equitable access to vaccines, the organization said recently.

“The United States will continue to engage our international partners to ensure we defeat this virus, but we will not be constrained by multilateral organizations influenced by the corrupt World Health Organization and China,” White House spokesman Judd Deere said in a statement.

“This president will spare no expense to ensure that any new vaccine maintains our own FDA’s gold standard for safety and efficacy, is thoroughly tested, and saves lives,” he said, referring to the U.S. Food and Drug Administration.

The global effort to develop a vaccine against the virus, which has killed more than 851,000 people, has seen recent launches of late-stage trials, but work on treatments has also gone into overdrive.

There is no approved coronavirus vaccine, except one authorized in Russia before large-scale trials.

FDA Commissioner Stephen Hahn told the Financial Times in an interview published on Sunday that his agency was prepared to authorize a coronavirus vaccine before late-stage Phase Three clinical trials were complete, as long as officials are convinced that the benefits outweigh the risks.

On Monday, WHO officials said rushing to make a vaccine widely available could pose risks.

“If you move too quickly to vaccinate … millions of people, you may miss certain adverse effects,” said Mike Ryan, the head of WHO’s emergencies program.

WHO chief scientist Soumya Swaminathan said the FDA’s approach was “not something that you do very lightly.” She said the WHO’s preferred approach would be to have a full set of data which could be used for the pre-qualification of vaccines.

Trump has been critical of the WHO’s handling of the coronavirus pandemic, accusing it of being too focused on China and issuing bad advice. In May, Trump announced the United States was cutting ties to the organization.

Phase Three trials, in which randomized patients are treated with a drug or a placebo without participants or doctors knowing which group they were in, are considered the gold standard for clinical trials. (Reporting by Jeff Mason; additional reporting by Ann Maria Shibu; Writing by Eric Beech; Editing by Sandra Maler and Leslie Adler)