Tentacles of love: My octopus teacher, a story of an astonishing friendship 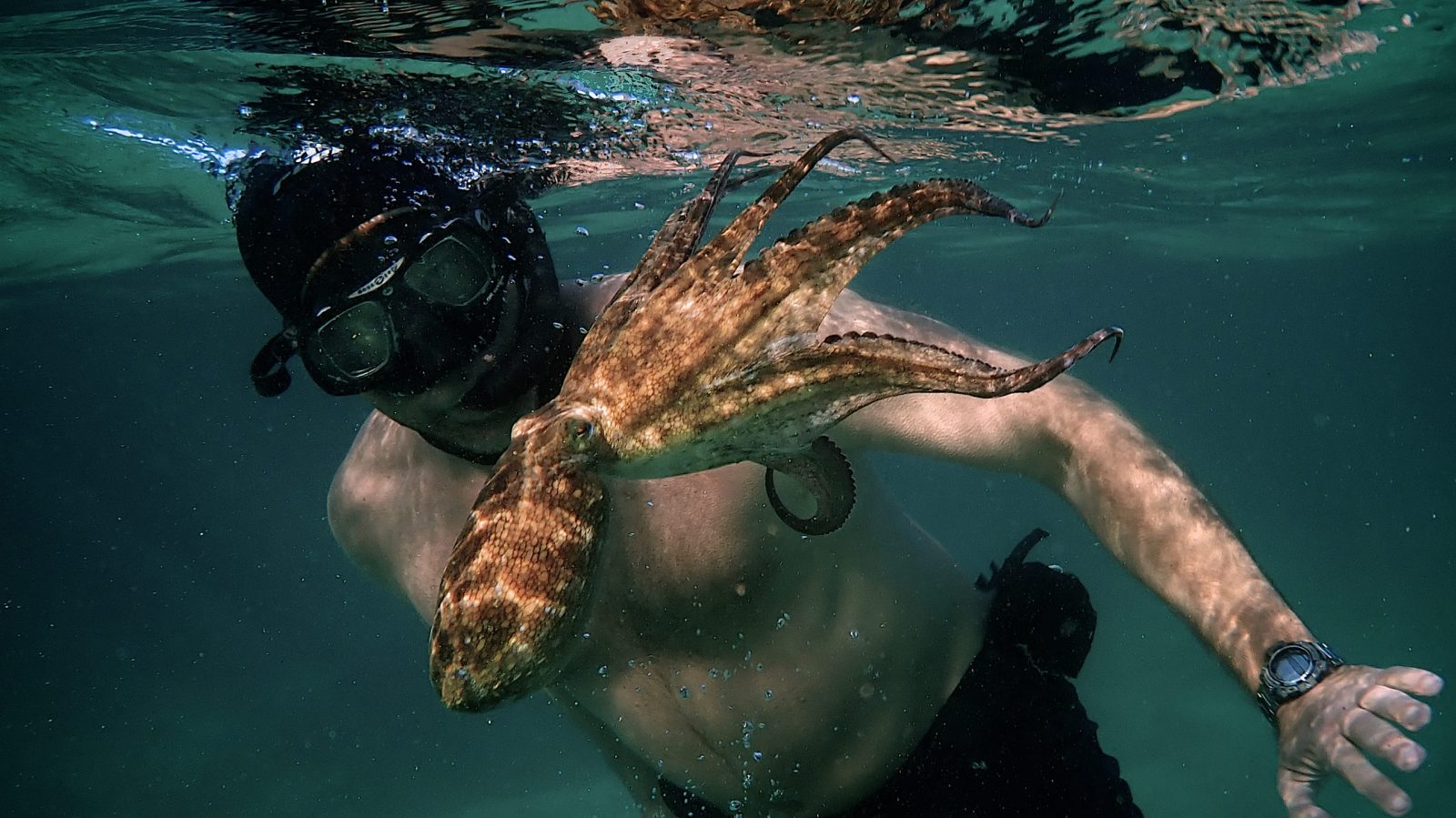 Netflix’s first original South African documentary, My Octopus Teacher is the true story of a man who falls in love with a mollusc, and how that mollusc in turn helps him connect more deeply with his own humanity.

Like many great tales, it is a love story with a sad yet hopeful ending.

It unfolds simply enough, shared as if we were gathered around the fire listening to a master storyteller. Craig Foster, the human in this undersea romance, is an award-winning documentary filmmaker and co-founder of the Cape Town-based Sea Change Project.

His filmmaking work and natural curiosity have meant that he’s racked up some incredible experiences in the course of a life spent exploring. He’s scuba-dived in the Okavango Delta where he spent time in the lair of a giant male crocodile. He’s hunted with the !Xo San in the central Kalahari, drunk the fresh blood of their kill and eaten the liver raw. He’s been into the deepest, driest parts of the Sahara; climbed the mountains of Mali carrying film equipment under 50-degree sunshine with desert winds burning his lungs; and – again in the Kalahari – he’s participated in San ceremonies using hyperventilation, rhythmic sound and the heat of the fire to enter altered states of ecstatic consciousness.

Then there is the shy, curious, unusual animal – this story’s titular cephalopod – that became his teacher.

This story, though, happens right on his doorstep, in Simon’s Town, where he lives on the edge of a giant wilderness, an underwater kelp forest that he says is the most productive ecosystem on Earth. There, he says, he is able to interact with an incredible array of wildlife. “Tiny creatures, many unknown to science, and enormous animals too. Right in front of my house I can find the biggest stingray in the world – a 4.5m creature that comes right up to me. Incredibly gentle if unthreatened. And I can be among huge packs of sharks, up to 60-strong.”

And then there is the shy, curious, unusual animal – this story’s titular cephalopod – that became his teacher. One day, while in those rough, ice-cold Atlantic waters, he has a brief, serendipitous encounter with an octopus. Over the months that follow, he manages to initiate and sustain an astonishing friendship with her, visiting her daily, filming her when he can.

While this eight-armed creature is ultimately the star of My Octopus Teacher, it is Foster – the narrator – whose life is radically affected, whose soul is touched and heartbroken by what unfolds. If this documentary about their mutual affection starts to feel like something that’s beyond the bounds of science, marine zoology or environmental awareness, it’s because there’s plenty in it that’s on some other, deeper level.

It is a nature film, sure, but its material seems to come from a place of miracles or magic. In some respects it feels far-fetched and fantastical.

And yet, every word Foster utters is true, and the close-up account of the mollusc’s life is entirely real.

Foster, whose professional experience, scientific mind and sense of purpose add enormous weight to this film, explains how, nine years ago, he began a daily regimen of free-diving – with only goggles, fins, weight-belt and snorkel, he started going into the sea every single day. He’d been suffering from a kind of burn-out, struggling with a sense of purposelessness and he took to the water on a mission to reenergise himself. He says he had a desire to become more like an amphibious animal, and so forswore any wetsuit: There was to be no barrier between himself and the world he entered.

As much as this process allowed him to witness his own body’s adaptations to the harsh cold, he began a life-shifting study of the kelp forest in which he was spending so much time. It is, he tells us, an alien environment – “much more extreme than our maddest science fiction.”

The film gives her plenty of opportunities to demonstrate the extent of her wit and wile – and her ability to think on her, um, tentacles.

It is also little researched, largely unknown and wholly misunderstood. In other words, there’s a great deal more life in it than can be accounted for in a single documentary. But where better to begin than with a love story?

Foster, who grew up on the edge of the Atlantic and spent much of his boyhood on the shore, and in rock pools, says he was drawn back to the water because those days as a boy had been the happiest of his life. Little did he know that returning to the sea would cause such a profound connection with the creatures that live there – many of them barely known to science.

Following his first meeting with that octopus, Foster wondered if something more might come of their encounter. But how, he asks, do you win the trust of an animal that’s spent millions of years learning how not to be found?

It took persistence and patience. Over time, by returning day after day to where he first met her, Foster not only earns her trust, but discovers that she’s curious enough to make the first move. And so an unlikely friendship was established and Foster was – during hundreds of dives – able to capture on film some of the most astonishing events in the life of this secretive, strange and remarkably smart creature.

Some of it is almost unimaginably jolly, but in a heartbeat, life under the sea can turn into a cruel struggle for survival. If watching an octopus playing silly-buggers with a shoal of fish sounds far-fetched, wait until you see how she outwits a predatory pyjama shark or, in a flash, fashions a makeshift fortress out of shells. There’s enough visual astonishment to turn everything you thought you knew about the common octopus upside down.

The film gives her plenty of opportunities to demonstrate the extent of her wit and wile – and her ability to think on her, um, tentacles. She is full of surprises: Just when you’re done gawping at the gracefulness of her fluid, dancelike moves as she glides through the water, she suddenly morphs into what looks like an old lady hunched over two legs as she uses two of those tentacles to walk, bipedally, along the ocean floor.

It’s when we see her behaving with glints of emotional intelligence, however, that the film transcends our expectations of nature documentary. A scene in which we first see this mollusc reach out to touch and grip Foster’s hand is as stirring as it is shocking. And, by the time human and creature are old friends, and you see her clinging lovingly to Foster’s chest, you kind of know that you really have witnessed a kind of miracle.

For Foster returning to the ocean was a watershed moment in many respects. Apart from reigniting a consuming interest in the kelp forest, the rocky shore and the intertidal zone, being in that environment every day also gave him the full body reboot he was after. The cold water “upgrades your brain,” he says, to the extent that his daily swims restored his health and vitality, and gave him back the life-force he needed to be a better father to his son and to function better as a human being.

What was far less expected was how his repeated exposure to the creatures that live below the surface – and to his octopus teacher, in particular – deepened his already profound connection with nature. Foster admits that his relationship with the octopus became quite obsessive – he began to think about her constantly, even dreaming octopus dreams. What’s deeply touching, though, is Foster’s account of how her presence and their regular interactions rewired him emotionally. It’s as if she taught him to connect on a deeper level.

Beyond the earnestness and intimacy of the storytelling, the documentary benefits from its refreshing authenticity. If you’ve grown accustomed to programmes that trick you into thinking you’re glimpsing the honest-to-god day-to-day lives of various animals – as though the film crew isn’t even there – this film offers a welcome shift of perspective. There’s no extensive camera crew, no faking it. It is in some ways an antidote to those lavish BBC nature films and high definition wildlife shows that are so much in vogue, but that have a tendency to drown out reality with technology.

By the end of the film, we feel as if we’ve known the octopus for years and that’s despite captions alerting us to a more literal passage of time, and Foster’s reminders that an octopus’s natural lifespan is only a year. She must live fast and intensively, he says, because her life is so short.

This is a potent film about that short, incredibly full life. If you’re not moved by it, you might want to check your pulse. DM/ML

Directed by Pippa Ehrlich and James Reed, My Octopus Teacher has already won the Best Feature award from the EarthxFilm Festival 2020 and has been nominated in eight categories at the upcoming Jackson Wild Media Awards (28 September–1 October), a kind of Oscars for nature films. It is available on Netflix from 7 September.  seachangeproject.org