OR Tambo District water management crisis: The making of a public-health time bomb

By Alicestine October for Spotlight• 2 September 2020 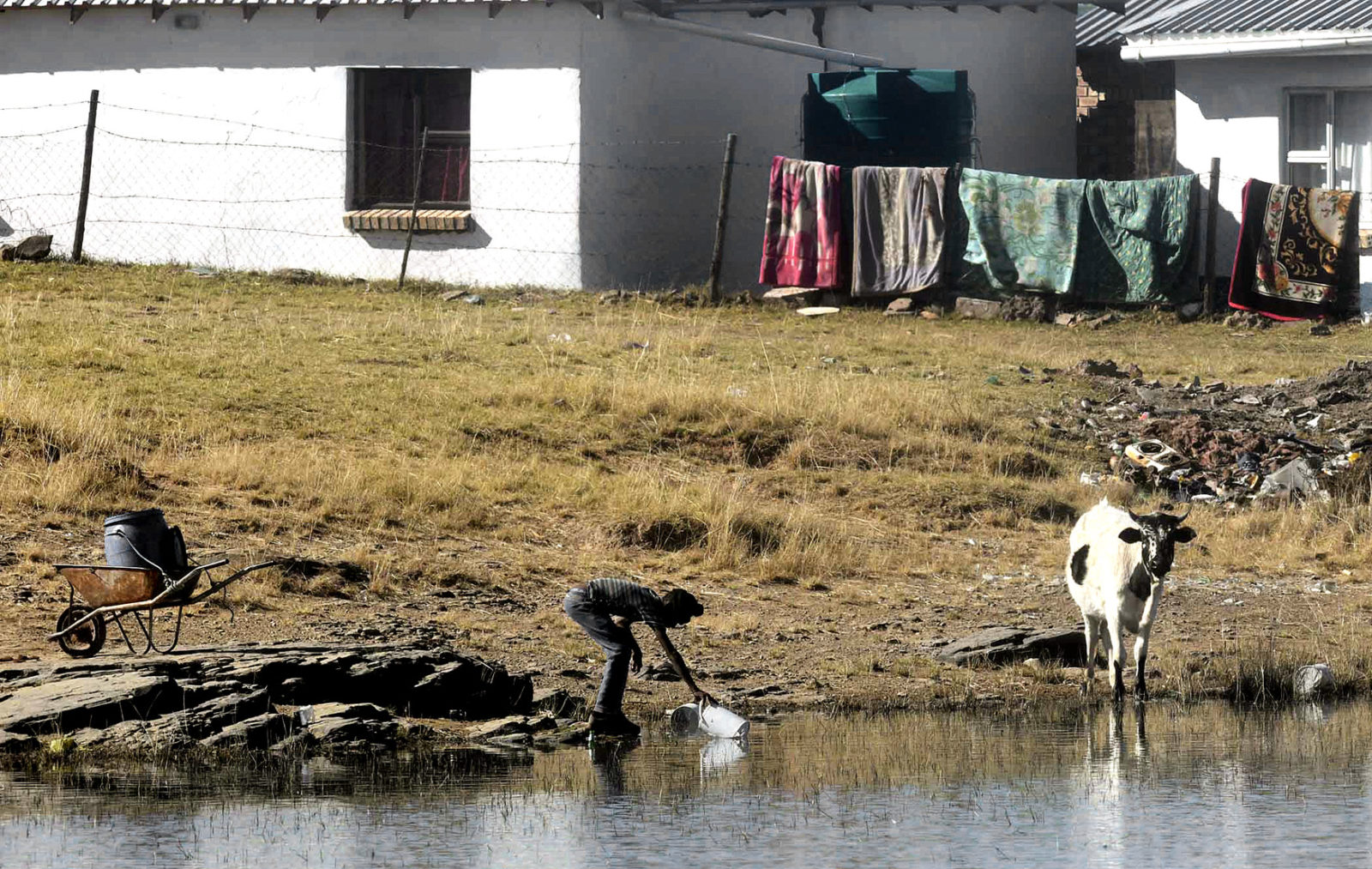 Residents in villages such as Qumbu say sometimes they have no choice but to use water from this dam they share with livestock. They boil the water to drink and cook with. (Photo: Black Star/Spotlight)

On the ground in the Eastern Cape and from recent proceedings in Parliament, it seems clear that there is a water management crisis in the OR Tambo District – a crisis with public health implications beyond just Covid-19.

There are certain choices one should not be forced to make, especially if you are caught in a pandemic when personal hygiene is crucial to prevent and limit transmission of a virus.

In certain areas of the rural Eastern Cape, however, thousands of residents are forced to make impossible decisions every day. At the centre of these rural communities’ daily gamble for survival is access to clean water – a basic human right still out of reach for many.

Siyasanga Sodwana, 33, has been fetching water from nearby rivers and dams for most of his life. He says he is from a village he calls Intaba ye Mission about 30km from Mthatha. Sodwana is one of the more than half of residents in the mostly (93%) rural OR Tambo District in the Eastern Cape who do not have water within 200 metres from their dwelling.

Executive Mayor of the OR Tambo District, Nomakhosazana Meth, in a presentation  to Parliament’s Portfolio Committee on Cooperative Governance (Cogta) in August said access to below minimum service levels in the district is pegged at 52% and 28,2% of residents (households) still had no access to water services.

Between 2011 and 2016 access to water in the district has deteriorated – something the municipality back then attributed to “unreliable water sources which mostly dry up”.

When every drop counts

“Water is not for washing hands,” says Sodwana, “this water is for us to eat. We travel about 20km [and] pass three villages on foot to get this water. So we can’t waste this water on washing hands.”

Having to make choices such as these put many of these rural residents at risk, not just for Covid-19, but also other waterborne diseases, including cholera.

In another village near Engcobo in the same district, Ludwe Nginingana tells Spotlight, residents in the area over the years “always have stomach problems” from the water they access from nearby rivers. It is especially bad in the rainy season, he says. “Covid-19 is a big problem, yes. We use hand sanitiser to wash our hands. When it’s finish (sic) we will wait until the next pay (grant) date and buy sanitiser. Water is scarce.”

In a province where many people depend on grants to get by, having to spend grant money on sanitiser also forces difficult trade-offs The Eastern Cape Socio-economic Consultative Council pegged the unemployment rate for the OR Tambo district at 35,5% in 2016.

Ayanda Leyi lives in a small village near Mthatha. He says water is “a big problem” in these villages. “We don’t have roads, we don’t have water. This is the kind of life we are living where old men and women walk through all these villages to get water in this place. This is our life. We drink this water, we cook, and we wash ourselves with this water.”

In August, MPs took a hard line in National Parliament and demanded answers from a delegation from the OR Tambo municipality. Instead, they mostly got excuses and obfuscation.

About 10km from the Nelson Mandela Museum in Mvezo, water tankers (trucks) fitted with tanks, pipes and generators (presumably the municipality’s multimillion-rand tankers) on some days are seen fetching water from the Mbashe River.

For others, like Grade 9 learner Ndikhokhele Peter from a village Gqaka, collecting water is an everyday chore. He uses two donkeys to help carry the water to the village.

In another village back in the OR Tambo district, Qumbu, Zolile Hlazo, 64, says he uses rainwater from his tank. “When the rainwater is finished, we buy water from the water tankers or go to the other villages.” But not everyone can afford this. “The dam you see next to us, we drink this water with cows and horses. We boil [the water] so that we can drink.”

The OR Tambo District Municipality functions as a water and sanitation provider, but with fewer than half the people in the area having access to inside or outside piped water, it would be fair to say there are serious governance and service provision failures.

One MP, Cilliers Brink (DA), during the committee meeting called the situation at the municipality “a non-stop train crash of poor decisions and governance” because of its inability to curb water losses, its poor revenue collection and deteriorating supply chain management processes that caused millions in irregular spending over the years. Meth attributed their poor revenue collection, among factors, to Covid-19.

Findings from the Auditor-General (AG) not only reflect Cilliers’ and other MPs’ concerns, but also show how governance failures and poor water services management at a local level can cause a ticking public health time bomb the country can ill afford – especially at the height of a global pandemic.

Shereen Noble, from the AG’s office in the Eastern Cape, told MPs the municipality received consecutive qualified audits the last five years. The qualified audit outcomes are, among others, rooted in hundreds of millions in irregular expenditure because supply chain management procedures, as prescribed by the Municipal Finance Management act (MFMA), are not followed.

Meth during the same meeting told MPs there are 1,249 filled posts and 1,103 vacant posts. She did not give a breakdown of the technical services staff vacancies. “It is true. We need to reprioritise and need to look at water and sanitation vacancies,” she said.

Noble also told MPs the municipality lost 31% of the total bulk water it purchased in the 2018/19 financial year, resulting in a financial loss of R11,1m. “This speaks to the [problems] with ageing infrastructure,” she said.

“We also couldn’t see that the municipal management did anything specific to improve the water quality during the year and we could not identify areas where they minimised further water shortages of water and disruptions in the communities that they [are supposed to] serve.”

Millions are spent on water infrastructure projects with no or little benefit to communities. Noble recalled one instance where the AG found the municipality reported a water supply project as complete in its financial statements and the annual report but “when we went and physically inspected the water supply we found that there was actually no water going to the community to which it was supposed to go to”, Noble said. Considering that here are no available monthly progress reports for infrastructure projects, the AG could also not find any evidence that “the progress on the project was monitored” and that the project was completed in the set period.

During question time, ANC MP Phindisile Xaba-Ntshaba told the delegation, she is only getting more questions than answers. “So, in simple language – tell us what is it that you are doing to make the district a better place? People are drinking water with animals,” she said. EFF MP, Khanya Ceza, demanded that the MEC for Cogta in the province investigate all executive members involved in water projects. Ceza asked where the water tankers are in the district because residents still say they do not have water. “They say the water tanks don’t have water since they had been installed.

Committee chair, Faith Muthambi, earlier expressed the committee’s concern over water problems in the province. “This directly impacts the ability of communities to follow [the] World Health Organisation’s protocols to combat the spread of Covid-19,” she said in a statement.

But Covid-19 is not the only concern. There are also broader public health concerns.

In many rural communities, the link between the lack of clean water and sanitation and avoidable health risks have been well established, making access to safe water a public health imperative.

In a rural area like OR Tambo, the usual trip to the river, borehole or spring where rural communities without piped water fetch water, often means humans share the water with animals, collect it in sometimes unsealed plastic containers and many women will do their washing there.

According to Dr Jo Barnes, epidemiologist at the Division for Community Health at Stellenbosch University, this is a classic case of poor water access and unpurified water sources which can cause a huge disease burden in rural and semi-urban communities, especially for the poor.

“Unpurified water can carry a large number of disease organisms,” says Barnes, “including many organisms leading to severe diarrhoea, skin infections, and eye, ear, nose and throat infections, to name but a few”. “When the water sources are further contaminated by animal waste, then urinary tract infections and liver parasites are also a real risk.”

“Now, in times of the coronavirus, poor access to clean water also hinders the ability of such persons to maintain the personal hygiene essential to keep safe. All these problems put potentially avoidable extra strain on health services,” says Barnes.

Some studies explored the safety of the typical containers residents in rural communities often used to store drinking water. It was found where many residents often use polyethylene and galvanised steel containers for the storage of their drinking water, Coliform bacteria, among others, were present. This type of bacteria in drinking water can mean there may be disease-causing organisms (pathogens) present.

In the absence of piped water, many rural residents depend on rivers and boreholes. One study exploring boreholes in the Vhembe district in Limpopo, showed where boreholes are not maintained and where this leads to stagnant water damming up, there is a risk for contamination of this water source. So, the safety of borehole water cannot be guaranteed. An important observation in the study is that municipalities have a big role to play, especially in drawing up “maintenance plans to ensure that all boreholes are functional and provide safe drinking water to the rural communities”.

Barnes notes that the official statistics on how government improved access to water, often do not paint the full picture. “That figure does not take into account the number of installations that have failed or broken down in the meanwhile, so there is no accurate information on the exact number of persons whose lives have been improved by working upgraded water services,” she says. “Unfortunately this overoptimistic picture has hindered the proper implementation of workable systems. Installing pumps, filters and tanks are bound to fail if no ongoing plans are in place for their upkeep and for training of staff to look after them.”

Unfortunately, as is clear on the ground and has become clear in Parliament, there are very significant question marks over the OR Tambo District Municipality’s commitment and capacity to maintain, monitor and develop water infrastructure. DM/MC