Lockdown lessons on violence and policing in South Afri...

Lockdown lessons on violence and policing in South Africa

Lockdown lessons on violence and policing in South Africa

Police in Gauteng search street people in a area used by the homeless during the national lockdown. (Photo: EPA-EFE / Kim Ludbrook)

A new study hints at ways to improve safety in some of the country’s most dangerous areas. By Andrew Faull and Jane Kelly.

In an effort to enhance policing and violence prevention, a team of Western Cape Government and Institute for Security Studies (ISS) researchers carried out a study to track and understand violence and policing during South Africa’s Covid-19 lockdown.

From April to August 2020 we analysed mortuary and ambulance data, conducted a survey of over 5,000 people, and interviewed law enforcement personnel, non-governmental organisation representatives and residents in select areas. The study tracked weekly homicide trends across the Western Cape, focusing on 11 high-violence areas which in 2018/19 accounted for 50% of the province’s 3,974 murders.

Although murder declined by an average of 18% in the 11 study areas during lockdown, the analysis shows that violence varied significantly from week to week (Figure 1). Under Alert Level 5, when alcohol and most movement and economic activity was banned, murder in the 11 areas plummeted by 47% compared to the same period in 2019. Under Level 4 it was down 38%. 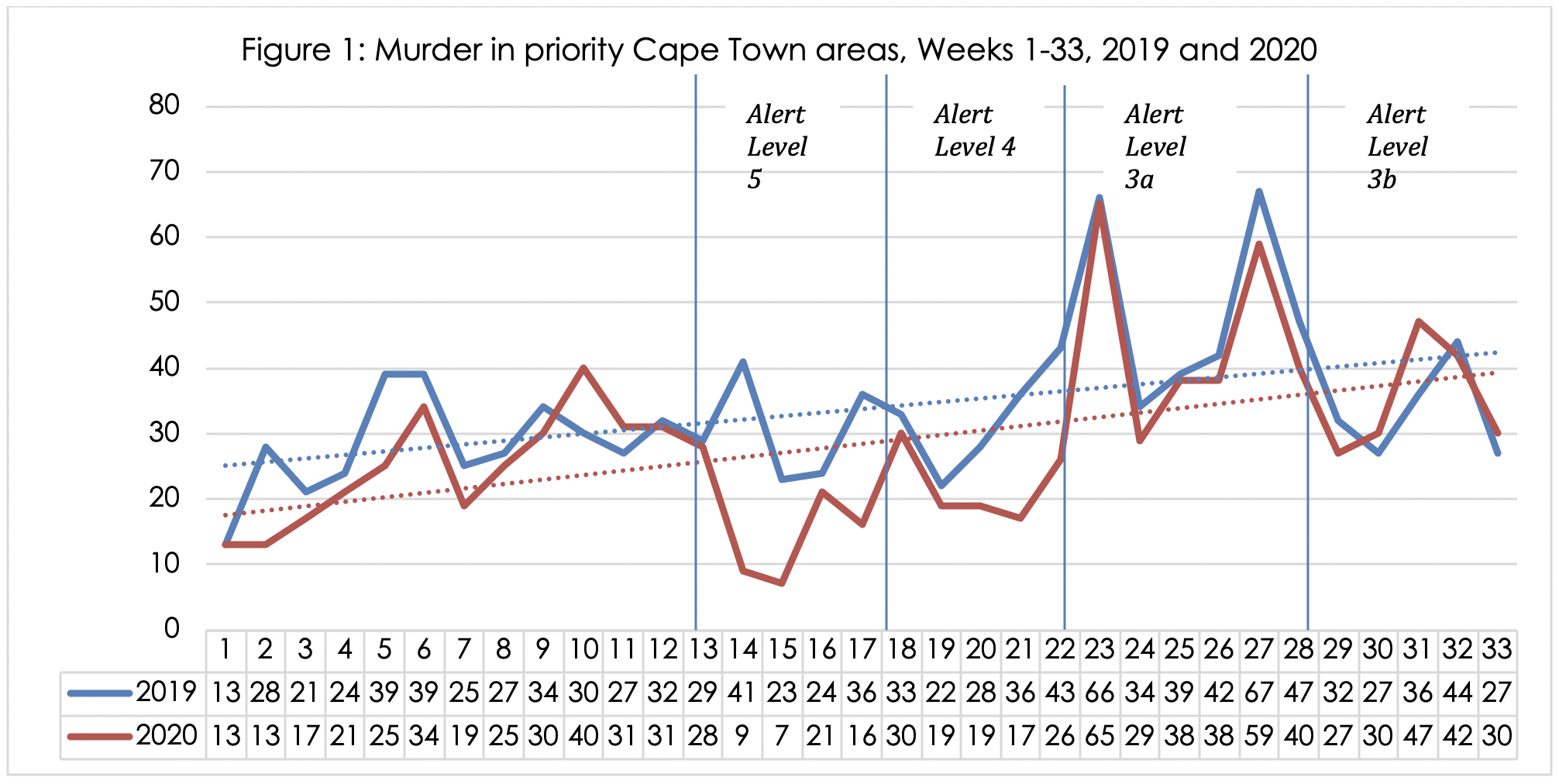 With the introduction of Level 3a – the unbanning of alcohol and easing of many other restrictions – murder increased significantly. During this time, it was only 9.5% lower than the same period in 2019.

At face value, this suggests that alcohol explains the province’s violence. However when alcohol was again banned under Level 3b, murders increased by 6% compared to the same period in 2019. And from 1 June 2020 onwards, with Alert Levels 3a and 3b, murder trends closely mirrored those of the same period last year.

This suggests that stemming violence will take more than regulations and laws; it will require their enforcement – something that became increasingly inconsistent as the lockdown continued.

Our team also disaggregated murders by category of weapon used. In 2019, 49%-59% of murders during the corresponding period resulted from gunshot injuries, and 28%-36% from sharp objects (e.g. knives). During lockdown, between 62% and 78% of injuries were gunshot-related and only 9%-24% were linked to sharp objects (see table). Similar analysis is found in the South African Police Service (SAPS) lockdown data, where almost two-thirds of murders were associated with firearms.

In the study, sharp-object murders peaked under Level 3a when alcohol was reintroduced. In a related finding, the percentage of female murder victims was almost halved (4%) in the first six weeks of lockdown compared to the same period in 2019 (7.8%).

Considered in light of SAPS analysis that “arguments” and “misunderstandings” account for most interpersonal violence, this data suggests two things. First, alcohol restrictions may have reduced impulsive, interpersonal violence during lockdown (including domestic violence). Second, some people with access to firearms are so invested in the use of violence that lockdown restrictions didn’t temper it.

Two key lessons from this study are that both alcohol and firearms require better regulation. If the alcohol ban helped decrease sharp-object, opportunistic and domestic violence, then better regulation of alcohol may reduce this in future.

However, the data also suggests that patterns of firearm-related violence may persist, irrespective of the availability of alcohol or restrictions on movement. As such, alcohol enforcement must be accompanied by the full regulation of firearms, focusing particularly on the removal of illegal firearms.

During lockdown, immense law enforcement resources were deployed, including soldiers, private security, traffic and metropolitan police, and SAPS officers. Because the Western Cape Safety Plan aims to concentrate resources in select high-violence areas, in addition to monitoring violence, our research sought to gauge residents’ experiences of policing during lockdown.

The study found general support for focused policing. From 15-30 June, all Vodacom and MTN network subscribers in Delft, Khayelitsha and Philippi policing areas received an SMS invitation to participate in the survey. Nearly 5 800 people responded, 49% female and 90% younger than 34.

Surprisingly, respondents reported noticing little difference in police visibility before and during lockdown, with close to 50% saying they saw police daily, and 25% weekly over both periods. Similarly, levels of reported trust in police and law enforcement were stable, with roughly 35% having “a lot” of trust before and during lockdown, and 24% having none “at all”.

Despite this general satisfaction with enforcement, 31% of respondents thought violent crime had increased in their community during lockdown while 42% thought it had decreased. Twenty-nine percent said they’d been a victim of crime during lockdown, a rate far higher than the national average of 0.25%-6%, or the provincial average of 5%-9%.

A further 26% said they knew of others who had experienced crime. Despite these high rates of victimisation, half the respondents felt “very safe” in their community during lockdown (49%), as well as in the preceding year (51%).

The data suggests that residents were already accustomed to living with high rates of violence, as well as regular police activity. If the Western Cape’s Safety Plan is to improve life in such areas, policing must become more effective, and violence prevention interventions must challenge and disrupt the normality of pervasive risk.

But the analysis, as well as the SAPS April-July crime data, also highlight that even a societal lockdown cannot stem South Africa’s violence. Although the national murder rate plummeted during the first three months of lockdown, murders in the country continued at nearly four times the pre-pandemic global average.

So despite unprecedented restrictions on movement, alcohol and the economy and a surge in policing activities, South Africans continued to kill one another at a very high rate. This is why the Western Cape Safety Plan is so important. It seeks not only to stem the most severe violence where it is most concentrated, but also to introduce systems that address the drivers that keep South Africa so violent. DM