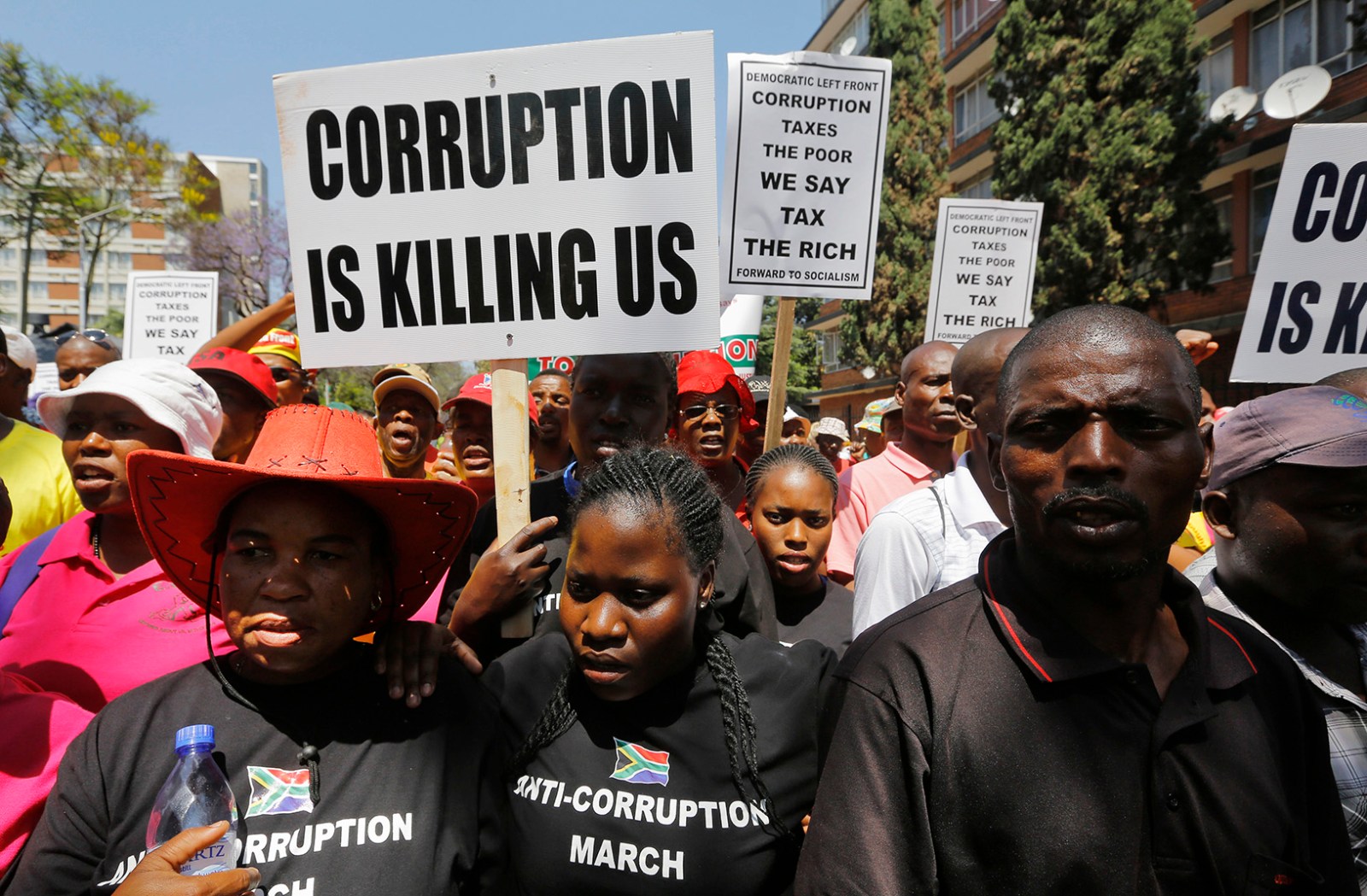 Between February 2019 and April 2020 the number of civil servants — unlawfully — doing business with the state increased by almost 50%, says the writer. (Photo: EPA / Kim Ludbrook)

The number of government employees in Eastern Cape doing business with the state has increased by almost 20 times during the Covid-19 pandemic from the previous financial year.

From a mere 29 during the 2019/2020 financial year, the number of civil servants doing business with the Eastern Cape government skyrocketed to 565 during the Covid-19 pandemic.

Premier Oscar Mabuyane said last week that his exco has resolved that the respective heads of department “must take the necessary remedial action against potentially conflicted officials, the officials of departments responsible for sourcing quotations, bid evaluation committees and supply chain management officials. They will report action they have taken to the director-general in the Office of the Premier,” Mabuyane said in a briefing last week.

The MEC for Finance in the province, Mlungisi Mvoko, said in an answer to the Treasury on June 26 that in the 2019/2020 financial year there were only 26 civil servants who had done business with provincial departments and three who did business with national departments.

He said the provincial treasury issued letters on conflict of interest to the affected departments on a quarterly basis and the departments are requested to take the necessary disciplinary action against implicated officials.

“The department where the official is employed is required to take the necessary disciplinary action against both the identified conflicted officials and provide proof to provincial treasury.”

Mvoko said in terms of a directive issued by the Office of the Premier, the “head of department should note that he/she will be held to account for failing to act against any official who is found to have contravened the above statutory provisions”.

Referring to the 2019/2020 financial year Mvoko said: “In the reports to the provincial treasury from those departments who responded to the last quarterly report/letters there were departments who had taken remedial action against the affected officials.”

He said one official from the Department of Education had resigned.

Mabuyane’s spokesperson, Mvusi Sicwetsha, said all heads of department had been instructed to act against those on the list.

The Democratic Alliance’s Bobby Stevenson said the Covid-19 “procurement pot” created an “irresistible opportunity for greedy civil servants to jump in on the act”.

“This feeding frenzy was no doubt sparked by them seeing those closely connected to politicians benefiting. This illegal double dipping highlights how the Eastern Cape is the epicentre of corruption. The premier needs to fire those responsible to arrest the moral decay and the looting that is taking place in our province. You cannot be soft on corruption while pretending to stand for good governance,” Stevenson said.

Jay Kruuse from the Public Service Accountability Monitor said the problem of government officials doing business with the government in their private capacity is often not addressed as doing so will implicate those in leadership positions.

“The numbers come out. Many organisations and bodies express concern. Findings are made. But the issue is not addressed… to quote another former political leader: We all have smallanyana skeletons in the closet.”

He said there are many reasons why public servants should not do business with the government in their private capacity.

“If a public servant is doing business with the state, you must ask yourself, where are they diverting their time and energy? Most of them are employed full time. If you have a business on the side, how much time are you spending on your work and how much do you serve the public? Are you a productive member of the department where you are employed or are you stealing time?

“That concern goes further. A private or familial relationship with a supplier will create a special interest not to burn bridges. This might lead to punitive clauses not being implemented because an official is conflicted.

“It erodes the competitive aspect. Jobs for pals, friends and family violate standards and create the very real possibility that prices will be exaggerated. It does not make for a fair playing field. It restricts the ability of the private sector and especially small businesses to tender for work when getting the work is dependent on having connections.

… while new appointments at public oversight bodies and at the South African Revenue Service, the Public Investment Corporation, the Hawks and the National Prosecuting Authority was certainly heartening, it will take a lot of “hard leadership and decisiveness” to make a difference.

“Another aspect is that it sustains cadre deployment and leads to the retention of staff not committed to daily tasks and likely to push back against civil servants who want to do their work and uphold the code of conduct. Keeping those who want to build up an empire while making money on the side is completely the opposite of Batho Pele principles.

“The system is so corrupted.”

Referring to the controversial letter ostensibly written by former president Jacob Zuma to President Cyril Ramaphosa on the eve of the ANC’s National Executive Committee meeting about corruption, Kruuse said:

“Zuma says in his letter that not all card-carrying members are corrupt – but the evidence suggests that there are a significant number of them. Corruption is highly coordinated and deeply established and it has existed for many years. Until such time as people are brought before a disciplinary hearing and held properly accountable, it will not be addressed.

“People must be prosecuted. Until then, the outrage and the call to action will remain hollow and ineffective.”

He said systems to manage public funds were deeply compromised during Zuma’s tenure.

“They were rendered ineffective by appointment of people who don’t follow through on their mandate, leaving a well-coordinated system of corrupt officials, who depended on the extensive failure of the system. Corruption is indeed rampant, widespread and systemic.

“We are not able to turn the tide against it.”

He said while new appointments at public oversight bodies and at the South African Revenue Service, the Public Investment Corporation, the Hawks and the National Prosecuting Authority was certainly heartening, it will take a lot of “hard leadership and decisiveness” to make a difference.

He said the outbreak of Covid-19 in SA was always going to be a golden opportunity for the corrupt to thrive.

“Corruption works best when there is a crisis because fast decisions are called for and there is weak capacity. The corrupt want to create an environment where checks and balances are weak. This then becomes a potent mix of events that can be seized by those not interested to serve and who want to make as much money as they can.

“It was predictable. It should not come as a surprise. It is not surprising that this is occurring because the deterrents are not there. We are lacking in implementation.”

Kruuse welcomed the release of the numbers and said it was long overdue. “It should become the norm,” he said. “That is one of the ways we can turn the tide. The public must start speaking out and placing government under pressure. Let justice prevail.” MC