Cape Town’s approach to homeless people is cruel and expensive 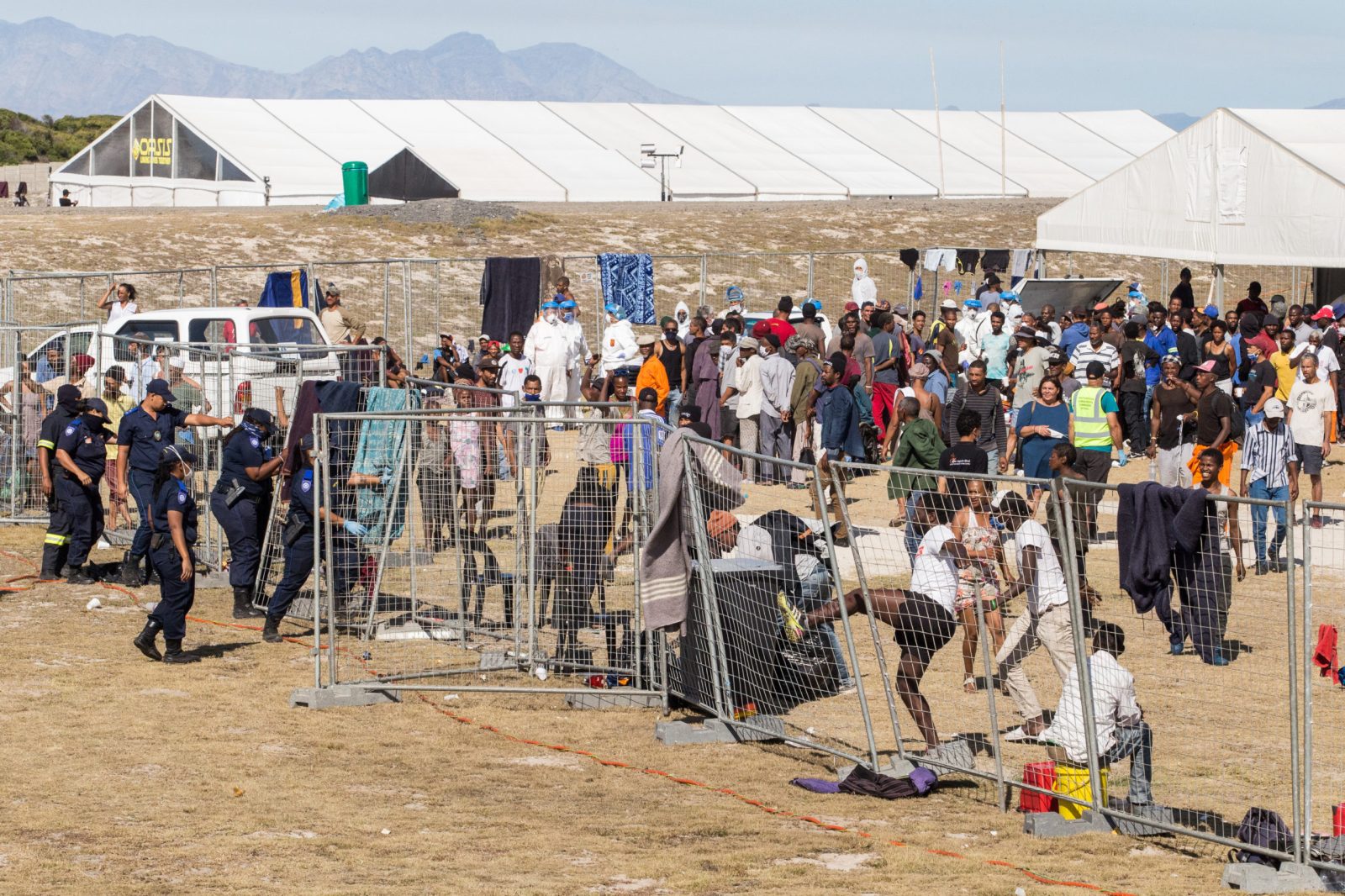 Homeless people in the now closed Strandfontein camp tried, in April 2020, to break down a fence in order to escape. (Photo: Ashraf Hendricks)

It would have been more affordable to offer people decent accommodation than the Strandfontein camp.

There are few cities around the world that don’t have homeless people. Most, including South African cities, hurriedly implemented lockdowns to manage the Covid-19 pandemic, so the issue of how to support homeless people to comply with physical distancing and hygiene regulations was not unique to Cape Town.

What was unique was Cape Town’s response. It took the opportunity to live out the fantasies of its most conservative leaders – Mayor Dan Plato and the Mayco member in charge of law-enforcement, JP Smith – to remove homeless people from the streets.

Homeless people were rounded up and forced into a pandemic-inappropriate camp on a muddy field in Strandfontein, miles away from the city centre. The camp was condemned by human rights organisations before the City aborted the project.

According to MEC of Local Government Anton Bredell, responding to questions I asked in the provincial legislature, the cost of this six-week fiasco was R53-million.

According to the City, 2,000 homeless people were accommodated. Many didn’t stay for the full six-week period. But even at the full 2,000-person complement, it cost R628 per person per day.

The biggest ticket item was tent hire. According to Bredell, hiring marquees cost nearly R44-million. That is an astonishing number. I have asked further questions about the legality of the contracting and referred the matter to the Office of the Auditor-General.

Even battle-scarred South Africans have been dismayed by the opportunism of the politically-connected to secure pandemic-related contracts. Though it has shown its stripes, over and over again, corruption is not the sole preserve of the ANC.

In Cape Town, the City had been skirmishing with homeless people for more than a year when the pandemic arrived. It had been fining them, confiscating their belongings – and drafted new regulations empowering it to order them out of the city and not to return.

According to the Western Cape government, there are approximately 4,000 homeless people in Cape Town. There are 1,499 shelter beds available, jointly funded by the municipality and provincial Department of Social Development, so there’s a shortfall.

There are similar shortfalls in other cities such as Tshwane, Johannesburg and Durban. In these cities, municipalities used empty community halls, stadiums and other state-owned properties to house, and feed homeless people at several sites across their metropolitan areas.

For its Strandfontein project, the City over-rode concerns raised by community organisations and the local councillor – initiating the camp on 1 April 2020.

An NGO worker reported that homeless people were scared because they did not know what to expect, and some “vanished into caves and up the mountain”. The DA’s Mayco Member Felicity Purchase reportedly promised residents she would go with private security to find those “hiding out” in the mountains.

That week, hundreds of homeless people were rounded up and bussed to the camp. Some said they had been lured with promises of fantastical accommodation, meals and medical care. But on their arrival, hundreds of people were crammed together into three marquees and made to sleep on cold floors until mattresses arrived a week later.

Although addiction rates at the site were estimated at over 50%, reports confirmed the preferred treatments were not available. The South African Human Rights Commission received reports highlighting the lack of drug withdrawal support, as well as poor hygiene, a lack of hot water and overall insufficient medical care. The international medical humanitarian organisation, Médecins Sans Frontières raised concerns that up to 600 individuals were crowded into one tent and said there was evidence of “violations of international humanitarian standards”.

I, too, conducted an oversight visit to the camp and was horrified by what I saw.

But all criticism was disregarded by the city.

Smith, the political head of law enforcement in Cape Town, termed the camp “absolutely tranquil” and said that, “the whole of this Strandfontein story is going to end up being a very good news story”. Within the first weeks, several incidents of violence broke out; a teenage girl was allegedly raped; a person died; there were allegations of a gang rape and those who tried to escape were arrested.

The R43.8-million that Smith’s Directorate spent on tent hire might have:

For just R7-million, a large 3×3 metre tent could have been given to each homeless person forced into the camp.

When I issued a statement raising issues with the tent rental cost, the City responded with a statement ignoring tent hire and pointing to some of its other spending.

The costs appear grossly inflated. I have asked the Western Cape Government to reveal the company or companies who were awarded these tenders and what process was followed to select the tender beneficiaries.

The evidence of this waste has also been submitted to the Special Investigations Unit. Any spending of public money involved in “the procurement of, or contracting for, goods, works and services, including the construction, refurbishment, leasing, occupation and use of immovable property, during, or in respect of the State of National Disaster” that is not “fair, competitive, transparent, equitable or cost-effective” must be investigated and ideally recovered.

Cape Town was once a proudly caring city. Its citizens have a duty to restore these values. DM

Brett Herron is a GOOD Member of the Western Cape Provincial Parliament and a former Cape Town Mayco member.

Views expressed are not necessarily GroundUp’s or DM’s.