Axolile Notywala: Moving on from the Social Justice Coalition to new pastures of fellowship and study 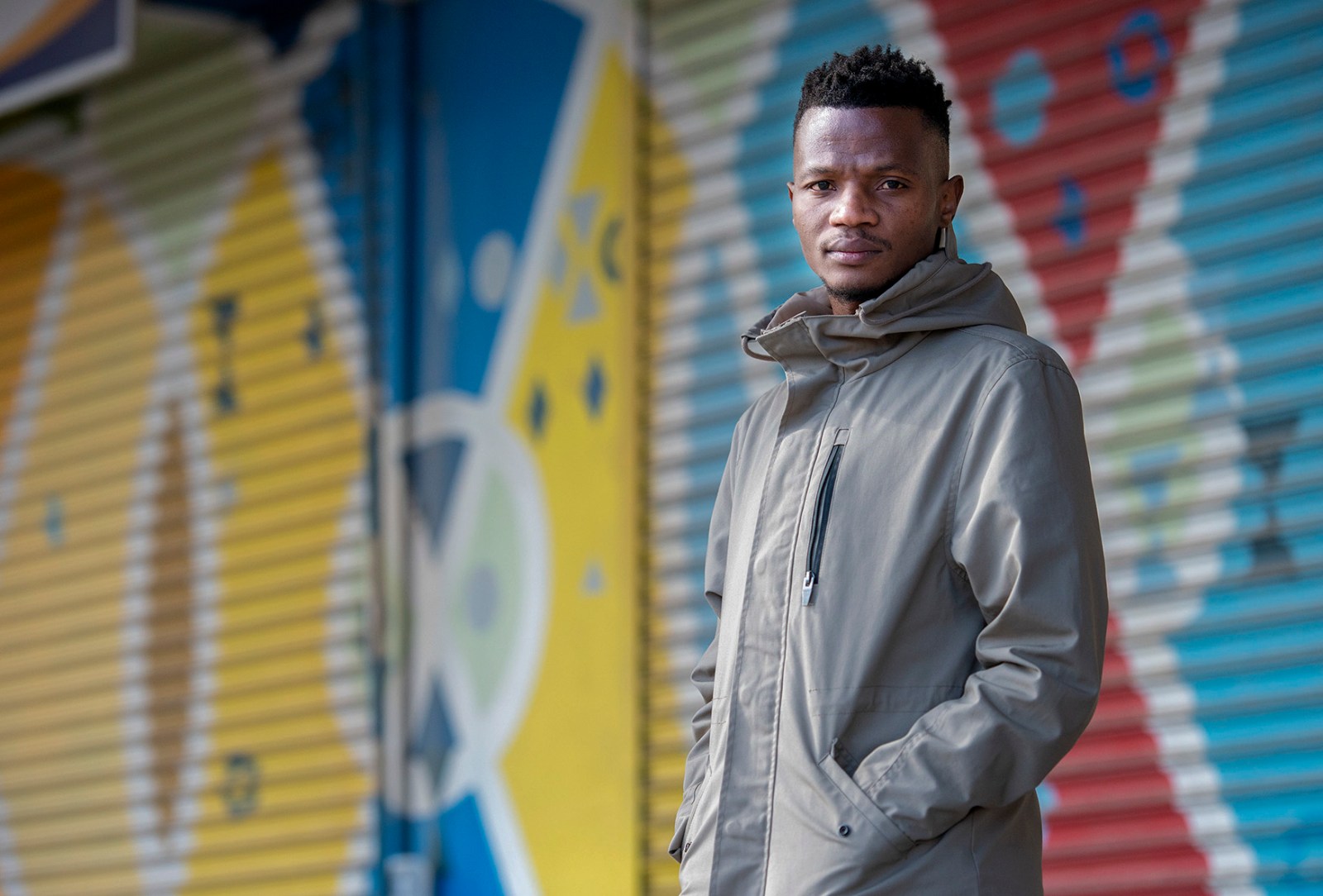 A Khayelitsha activist with deep roots in the community’s fight for housing and against gender-based violence, reflects on the work he has done and the tools he will hone for future service delivery activism.

At the age of 30, Axolile Notywala has been the general secretary of the civil society organisation Social Justice Coalition (SJC) since 2017.

Beneath his unassuming and measured disposition lies the ability to deliver incisive analyses of the social justice issues faced by the community of Khayelitsha, the township on the Cape Flats that he calls home, and how these reflect South Africa’s socio-economic inequalities and politics.

Notywala hails from the small Eastern Cape town of Lady Frere and moved to Cape Town to start his basic education. He went on to enrol at the Cape Peninsula University of Technology to study mechanical engineering in 2008, from which he deviated as he pursued activism.

The countrywide xenophobic attacks of 2008 sparked his involvement in activism, he says. The attacks in Khayelitsha were characterised by often deadly violence.

He systematically maps out the service delivery and social justice issues the community of Khayelitsha faces, distilling them to the failure of the state to provide adequate housing, sanitation and safety and security. In addition, a culture of gender-based violence prevails in the partially informal township reputed to be the largest and fastest-growing one in South Africa.

The history and culture of activism in Khayelitsha was ignited by the activism of the Treatment Action Campaign (TAC) when it fought for the rights of people living with HIV/AIDS to receive antiretroviral drugs, by using the Constitution as well as treatment literacy: knowing treatments that are available for diseases, the science behind them and potential side-effects of treatment. As a result, residents have adopted a strongly activist stance in their approach to the service delivery injustices they face now.

Notywala points out that the education-focused civil society organisation Equal Education is also based in education, and has members who were or are still part of the TAC. This shows how all their work intersects in order to campaign for the rights of the community.

The SJC has been at the forefront of civil society interventions regarding evictions, and I ask about the organisation’s work in this regard.

Notywala says that they were approached in 2017 by the community of Ireland in Khayelitsha to assist. He explains how they leveraged Section 26 of the Constitution to do this. It states:

1) Everyone has a right to have access to adequate housing.

2) The state must take reasonable legislative and other measures within its available resources to achieve the progressive realisation of this right.

He says the SJC also works closely with civil society organisation Ndifuna Ukwazi to fight for the rights of residents.

The City of Cape Town has labelled the SJC “instigators of illegal occupations of land”. He says the term “instigators” “speaks very little of black people and their ability to think for themselves. Our intervention is about ensuring that the evictions process is in accordance with the law and court orders, is non-discriminatory and dignified.”

Notywala adds that the SJC also provides people with the information that they need to knowledgeably engage with those who would try to unlawfully evict them. He says the issue of land and redistribution and spatial apartheid in Cape Town continues to exist because of a failure of the state to provide housing.

On the question of the use of language to frame narratives and drive specific responses from law enforcement, he says the work of the SJC is premised on ensuring language is not used in an exclusionary manner, particularly with the SJC having speakers of Xhosa, Afrikaans and English, which could be an impediment to being able to organise effectively.

With regards to law enforcement, he says that phrases like “land invasion” instead of “land occupation” are used to galvanise law enforcement against people.

Notywala brings up the issue of class differences that is often faced by people in civil society. He notes that there is differentiated treatment of people with formal qualifications and those without, in terms of being taken seriously and remunerated accordingly. This also affects donor perceptions of “professional” and “grassroots organisers” in terms of getting funding. He says this prevents some organisations from being able to access or unlock much-needed funding because of class barriers.

Those working without qualifications in organisations are often at the frontline of responding to community issues as they are often themselves affected, yet their remuneration or compensation is not reflective of that. The work done by community health workers, particularly during the current Covid-19 pandemic, is a case in point, he says.

Community health workers are the first to respond in terms of going into communities to do screening and testing. Discussing funding and its impact, he says donors need to be sensitive to the ever-changing political landscape which affects where and how funding needs to be allocated. Project-specific funding limits the ability to be responsive, with core funding being more flexible. He notes, however, that some donors have taken cognisance of this, particularly during the unanticipated Covid-19 crisis.

The SJC is currently conducting “gender, power and justice” dialogues over six weeks. He says this is largely predicated on recommendations from the Khayelitsha Commission of Inquiry. The SJC has been assisting people with following up on the many cases of gender-based violence that occur in the community, from reporting cases at the police station to seeing them through the court process. However, the organisation soon realised it was an unsustainable way to deal with gender-based violence. It therefore had to restrategise how it could put pressure on the state to act, but at the same time conduct discussions with members on issues of gender, rape, toxic masculinity and femicide.

“A lot of the time when we had been following the cases the focus was on the aftermath, after the event had happened, after someone had been killed, after someone had been raped. But how do we as an organisation and as a society deal with the issue that these problems are brought about by men? How do we make sure that these things don’t happen? Arresting rapists, arresting abusers doesn’t necessarily stop gender-based violence,” says Notywala.

His view is that because our criminal justice system is not rehabilitative, simply putting people in jail creates hardened criminals. Therefore the aim of the dialogues is to engage people on the thinking that leads to men thinking that they own women and can perpetrate violence against them based on existing power and gender dynamics.

The dialogues aim to enable sustained conversations beyond the month of August, Women’s Month, and beyond the community of Khayelitsha. The goal is to start addressing underlying state and societal systemic issues.

The murderer of 19-year-old University of Cape Town student Uyinene Mrwetyana, who bludgeoned her to death in the post office in Claremont, Cape Town on 24 August 2019, subsequently buried her body in Khayelitsha, he points out. This was because the murderer thought that the police in Khayelitsha would not find her body, precisely because policing there is so weak.

The dialogues are effectively Notywala’s swan song at the SJC because his term is now up. Where to next?

Notywala says he will be taking some time to rest and also pursue a fellowship with the Atlantic Fellows for Race and Equity. He will also be continuing his part-time studies through Unisa towards a degree in politics and use this time to further explore the concept of municipalism as a way of being better able to hold officials accountable with regards to service delivery at local government level.

To unwind, Notywala spends time with his nine-year-old daughter and loves to listen to hip-hop. Among his favourite artists are Eminem, Royce and Youngsta. It seems he might also have a hidden talent for writing and performing hip-hop – he is looking at potentially recording some tracks that would have “more of a conscious spin that talks about social justice”.

In closing, he confesses that people in the civil society sector rarely take out time for self-care, especially because most of them also live in the communities where they work. He, however, tries to do so as much as possible. DM/MC