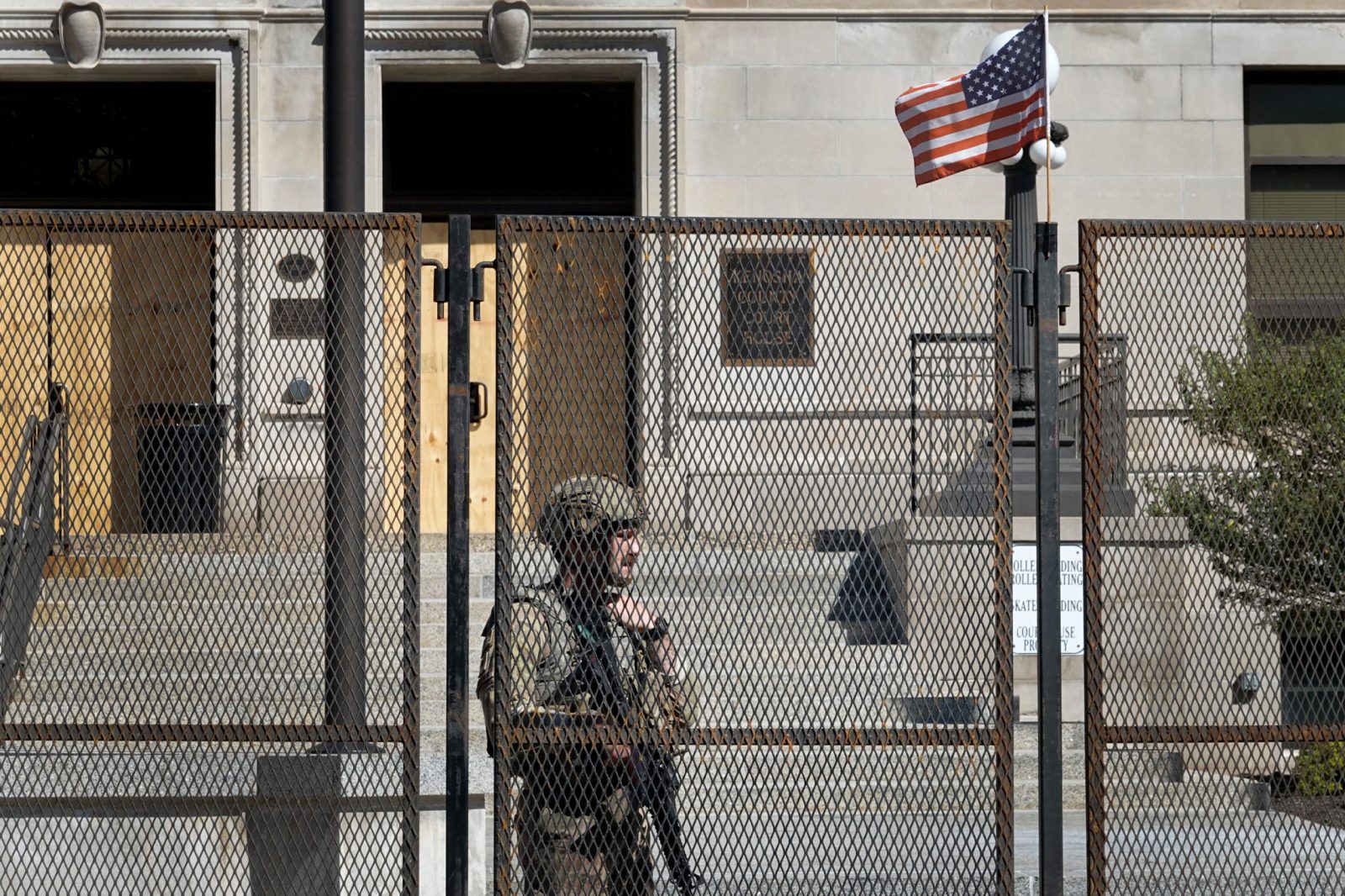 KENOSHA, WISCONSIN - AUGUST 30: A flag flies from a temporary security fence that surrounds the Kenosha County Courthouse on August 30, 2020 in Kenosha, Wisconsin. The city is recovering from several days of unrest and demonstrations after Jacob Blake was shot several times at close range in the back during an encounter with a police officer, which was caught on video. (Photo by Scott Olson/Getty Images)

While white policemen in the US have made headlines for killing and/or shooting Black Americans, shootings that have taken place at protests for racial justice have also left three white men dead. A 17-year-old teenager is to be tried as an adult after shooting three people and killing two of them in Wisconsin on 25 August 2020. And on Saturday, an alleged white supremacist supporter was shot dead in Portland, Oregon.

After over 90 days of ongoing protests in Portland, Oregon, a man was shot and killed when Donald Trump supporters and protestors clashed on Saturday, 29 August. Portland Mayor Ted Wheeler at a media briefing on Sunday lambasted the US president, saying Trump was the reason for the violent unrest.

Wheeler said: “Yesterday’s events began with hundreds of cars filled with supporters of the president… they were supported and energised by the president himself… Do you seriously wonder, Mr President, why this is the first time in decades that America has seen this level of violence?”

Trump’s reaction to the Mayor was to tweet: “… The Mayor is a FOOL. Bring in the National Guard!” While Joe Biden said he condemned the violence: “I condemn violence of any kind, whether on the left or on the right… We must not become a country at war with ourselves.”

The shooting took place after cars full of Trump supporters converged on Portland to hold a car rally to show support for the president. While police have not released details about the person who was killed, the leader of a right-wing group called Patriot Prayer said the person was “a friend and supporter” of the group. The man was reportedly wearing a Patriot Prayer cap.

In less than 70 days, the US goes to the polls, but it seems the country might catch fire before that can happen as Trump seems unaware (or set on ensuring), that his continued referral to the protestors as “Thugs”, anarchists and “terrorists” is, with apologies to David Bowie, “putting out the fire, with gasoline…”

For just over three months, protestors in Portland have not let up, taking to the streets to protest police brutality and racial injustice. The protests started after the killing of George Floyd on 25 May 2020 in Minneapolis.

On 28 August 2020, the attorney for former police officer Derek Chauvin, who knelt on George Floyd’s neck for almost nine minutes, filed a motion claiming prosecutors have not shown probable cause for charging Chauvin with murder and asked the judge to drop all charges. Chauvin has pleaded not guilty. Chauvin’s attorney claims Floyd died from a drug overdose and not due to having Chauvin put his weight on Floyd’s neck for eight minutes and 46 seconds.

Floyd’s family had ordered an independent autopsy, which stated that his death was due to “homicide caused by asphyxia due to neck and back compression that led to a lack of blood flow to the brain”.

The shooting of Jacob Blake in Kenosha, Wisconsin on 23 August 2020 injected new energy into the Portland protests – Blake was shot seven times in the back and is now paralysed. The 29-year-old father of three had his children – aged three, five and eight – in the back of the car while police were called out to a domestic disturbance. The dispatcher admitted that it was unclear if Blake was the “boyfriend” the caller had referred to. Since the shooting, there have been numerous social media and news media reports about Blake having had a knife – though there is clearly no knife in the video – and the newest claim is that he said he had a gun. But at the time of first reporting, police were saying he had a knife, now the gun “rumour” is running so strongly that some US media organisations are running fact-check articles stating that he did not have a gun and was not brandishing a knife.

Blake was shot a day after police in Lafayette, Louisiana opened fire on 31-year-old Trayford Pellerin who was said to have had a knife and who could be seen on video trying to get away from the police. At least four police officers can be seen walking towards Pellerin, who tries to get away and turns his back on them – when they fire 11 times.

Since Blake’s shooting, Kenosha residents have taken to the streets in protest and on 25 August, a 17-year-old white teenager, Kyle Rittenhouse crossed state lines to attend the Kenosha protest. Rittenhouse was openly carrying a large automatic rifle that appeared to be an AR 15 – a military style semi-automatic gun with a 30-round capacity. Wisconsin is an open carry state, but it is illegal for anyone under 18 to carry a gun in public. While there is footage of Kyle walking with the gun and talking to police – they did not ask him how old he was. Shortly after speaking to the policemen, he shot three people, killing two. He then walked past the policemen and drove back over the state line to Illinois, where he lives and the next morning, he gave himself up to police there.

On 28 August, there was a brief Zoom meeting with a judge and the teenager’s legal counsel. Rittenhouse will be tried as an adult, but is being kept in a juvenile facility. The state of Wisconsin is charging him with two counts of murder and one of reckless endangerment as well as illegally carrying a firearm. His next hearing is on 25 September 2020.

While Trump is confirmed to be visiting Kenosha, Wisconsin on Tuesday, 1 September, it is still unclear if the president will meet 29-year-old Jacob Blake or his family. On Saturday, the White House said the president would meet law enforcement in Kenosha and survey the damage that followed the protests.

Wisconsin Governor Tony Evers has asked Trump not to visit, fearing the visit will only serve to stir already troubled waters. Lawyer, activist and former National Association for the Advancement of Coloured People (NAACP) president Cornell William Brooks says: “Given the fact that he is going to Kenosha to visit… with law enforcement and to survey the property damage. Not on his itinerary is visiting with those who have suffered bodily damage… The president is going to make a bad situation worse.” DM