‘These Are Not Gentle People’: A true story, a courtroom drama, and a profound exploration of collective guilt 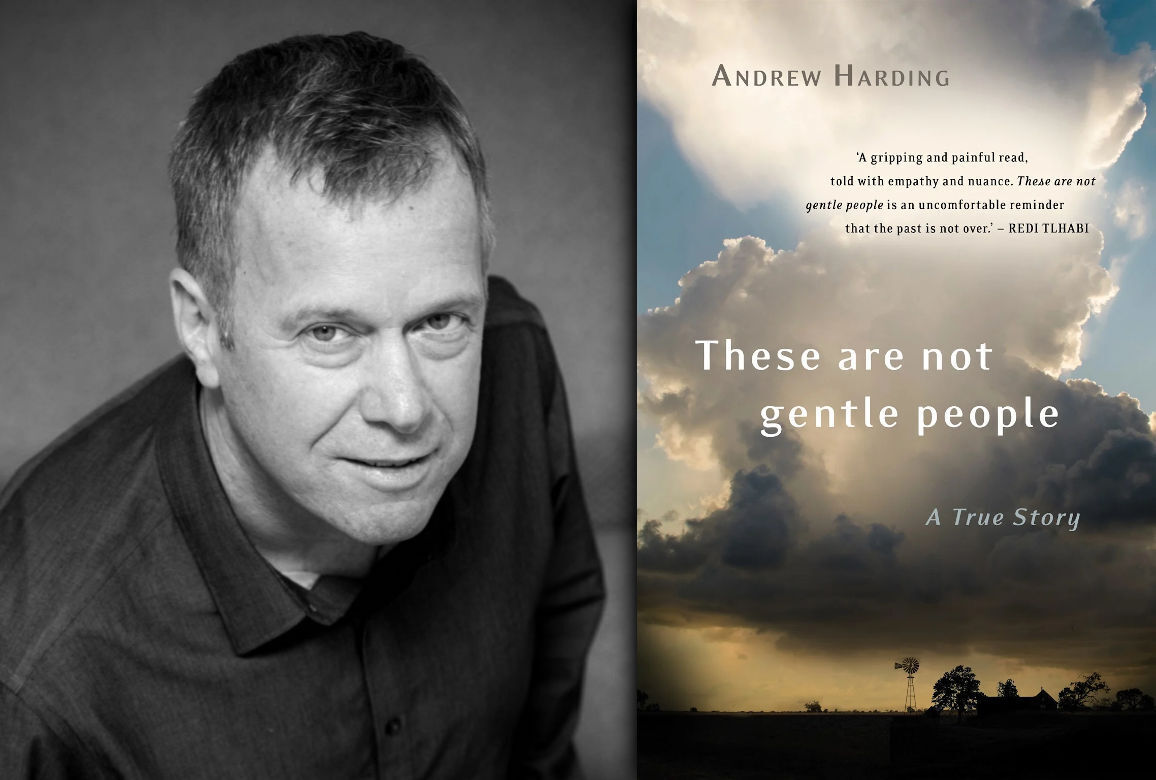 'These are not gentle people' (Pan Macmillan / The Reading List)

“I’ve tried to give everyone their say, and not to pass judgement.” – Andrew Harding discusses his new literary nonfiction thriller, ‘These Are Not Gentle People’.

On a warm summer’s evening in 2016, a group of white farmers gathered in the corner of a field outside Parys in the Free State. At their feet lay two black men – suspected thieves. The events that followed would come to haunt an entire community, tearing families apart, stoking racial tensions, and culminating in an explosive and profoundly revealing trial. In this nuanced literary nonfiction thriller, Andrew Harding tells the story of one moment of collective fury, explores its impact on a fractured town, and captures the drama of a Hawks investigation and the courtroom battles that built up – over years – to a furiously contested and stunning conclusion.

These Are Not Gentle People is a true story, a courtroom drama, and a profound exploration of collective guilt and individual justice. Award-winning foreign correspondent and author, Harding traces the impact of one moment of collective barbarism on a fragile community – exposing lies, cover-ups, political meddling and betrayals.

The Reading List caught up with Harding shortly after his book appeared on shelves. Here is our interview with the author of These Are Not Gentle People.

The Reading List: Towards the end of your book, you write that your aim “was not to write a current affairs book, or a treatise on race, or land, or poverty or politics”, but rather that you wanted to write “a piece of narrative nonfiction”. Could you explain a bit why you made that choice?

Andrew Harding: I suppose it began with the desire to stretch myself as a writer. I didn’t want this book, or the process of writing it, simply to be an extension of my journalism. I was aspiring to something more nuanced and, I hope, more literary. I also felt, over the years this case has spun out, that by writing in a less “current affairs” style, I could embrace, rather than shy away from, the ambiguities at the heart of the story I was trying to tell.

The Reading List: You conducted many interviews for this book, often on condition of anonymity. Could you share some of your more difficult interview experiences, and perhaps the strategies you developed to overcome those difficulties? Was safety ever a concern?

Andrew Harding: No, safety was never a concern. I suspect time, rather than any specific strategies of mine, played the key role in persuading people to open up. This was a four-year process. It gave people a chance to get used to me, to accept that I was speaking to all sides and to trust that – as an outsider – I didn’t have a particular axe to grind. I was very clear with everyone that I would only publish, and share, what they’d told me after the murder trial was over.

The Reading List: Towards the end of the book, you point out that some of the reconstructed accounts may be “fallible”, but that they are “not deliberately inaccurate”. How did you negotiate this boundary between fact and recollection?

Andrew Harding: It’s tricky. I worked hard to resist any embellishments. I visited all the key scenes, relied on the recollections of those involved, transcribed about a million words of interviews and testimony, relied on my journalistic experience and chose a style of writing (not using quotation marks, for instance) that, I hope, made it clear to readers that this is a nonfiction novel rather than the purest, strictest reportage.

The Reading List: The trial at the centre of the book was delayed many times, and you write about how over the years time “stretched and warped, far beyond the patience of all involved”. Did you ever find yourself losing patience with the book project?

Andrew Harding: The last-minute delays of the past year were particularly galling for all involved. But the truth is that a quicker process would almost certainly have meant a weaker book. Key elements of the story, and of the characters involved, only emerged or became clear to me in the final year. I only settled on a title right at the end. And, luckily, I never lost my fascination for the story as it unfolded.

The Reading List: These Are Not Gentle People has been compared to literary fiction – John Carlin calls it a “smartly paced true crime thriller with a vivid cast of characters”. How did you manage literary touches like pacing when you had no control of the actual pace of the real life events?

Andrew Harding: I decided to make a virtue, and a device, of the dramatically different versions of what happened to the two black farm workers who died. I structured the book so that we would return, at regular intervals, to the field where they were assaulted, and each time, we would relive the events through a different perspective. Elsewhere I suppose I sought to highlight the twists in the story, rather than sticking to a neatly paced chronology. And I wrote most of the epilogue before the verdicts had been announced, knowing how I wanted the book to finish, and where I wanted the reader to be left.

The Reading List: In the book you write about your experience as an outsider, being greeted every day with “Hello, Englishman”, and how it was a “slow journey to win people’s trust”. But I imagine this outsider status also afforded you a unique perspective?

Andrew Harding: I’ve spent 30 years as an “outsider,” living in Russia, Asia and Africa, so I’m used to it. And yes, it has limitations (not least, linguistic) and advantages. I think it made it easier for people to see me as a (relatively) neutral figure. I think foreigners often notice things, and are shocked by things, that locals have simply come to accept as part of the wallpaper. But South Africans – not least their wonderful journalists – are masters of piercing self-analysis, so I can’t claim any unique insights.

The Reading List: At one point you observe that ‘Parys may well be the nearest thing I’ve come across to a microcosm of South Africa.’ Could you expand on this idea?

Andrew Harding: I may have exaggerated! But I think that in a small town like Parys, you can see South Africa’s history, and its divisions, carved like geological strata into the landscape. And Parys has perhaps more strata than many rural towns – tourism, prosperity, small industry, poverty and all the rest of it – in a very small area.

The Reading List: The book is written from a number of different perspectives, all very different. How did you prevent your own biases from creeping into these narratives?

Andrew Harding: I’m not sure I did. I don’t pretend to be an entirely neutral observer. I’ve tried to give everyone their say and not to pass judgement on – for example – the verdicts. But I’ve shaped and edited the material to draw out certain points and themes, and, perhaps, to hint at things that shocked or angered me. Objectivity is a bit of a myth anyway, isn’t it?

The Reading List: In your conversation with Marianne Thamm in a recent Daily Maverick webinar, you mentioned The Executioner’s Song by Norman Mailer and In Cold Blood by Truman Capote as inspiration. Are there any other books or authors that inspire you?

Andrew Harding: Retrospectively… a dazzling book I’ve just finished called Apeirogon, by Colum McCann, which has made me appreciate quite how much further the world of narrative nonfiction can be stretched and twisted. I read Doris Lessing’s The Grass Is Singing while I was writing. Lots of Edith Wharton too. George Eliot. Jonny Steinberg. Antje Krog’s poetry. Did any of it rub off? If only! DM/ML

These Are Not Gentle People by Andrew Harding is published by Pan Macmillan South Africa (R290). Visit The Reading List for South African book news, daily.

Did you miss the webinar with Andrew Harding and Marianne Thamm? Click below for the event recording.

These Are Not Gentle People: An exploration of South Africa’s ‘truth’