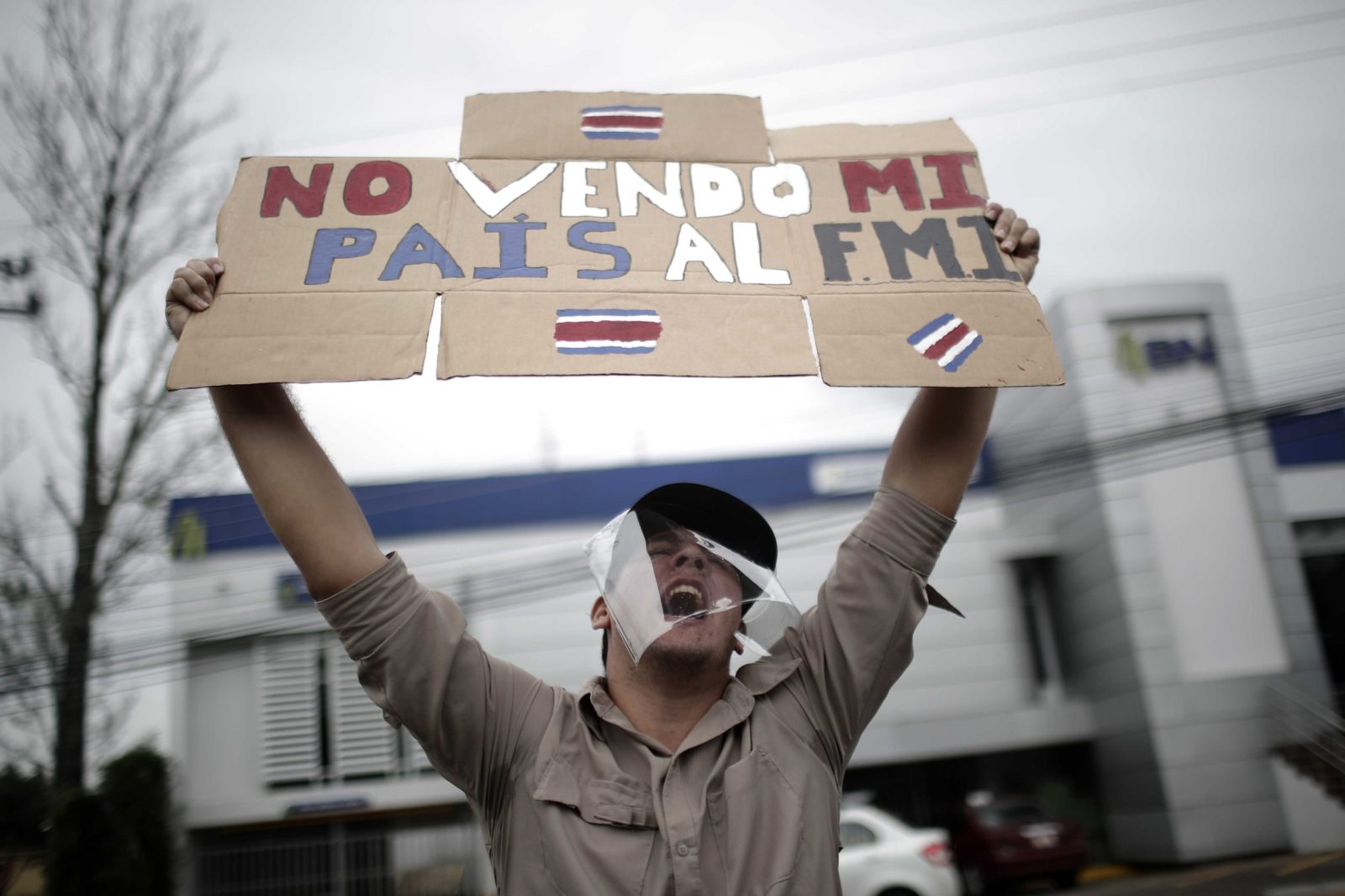 A demonstrator holds a placard which reads 'Do not sell my country to the IMF' as they participate in a protest outside the Presidential House in San Jose, Costa Rica, 13 July 2020. EPA-EFE/Jeffrey Arguedas

South Africa is not alone in seeing its debt levels surge in the face of a Covid-triggered global economic collapse. But not all debts are equal.

Governments raise debt for all kinds of reasons. First and foremost, it is accumulated if government spending exceeds revenue. This is far from a bad thing if the money is spent properly and transparently, meets a defined purpose, and has a reasonable expectation of being paid off without crippling the state’s ability to provide public services such as health, education and welfare.

Sadly, the global economic balance sheet also reeks of “odious debt” and “unsustainable debt.” Examples of the former historically include the debt forced on Haiti at gunpoint by France to pay former slave owners compensation for the loss of their property – a monumental economic crime that drained capital from the fledgling nation for over a century.

More recently, campaigns for debt forgiveness for Africa over a decade ago championed by celebrities such as the Irish rocker Bono were anchored partly on the grounds that much of the continent’s debt was incurred by rulers who siphoned or squandered the proceeds with scant benefit to the people.

In the case of South Africa, a poignant example was the case of apartheid debt, which the new ANC government agreed to pay in order to win the trust of global financial markets. Much of that debt bought guns for the apartheid state rather than butter for the wider populace, to use an analogy popularly used in economics 101. That debt was indeed odious, but it was clearly sustainable – it was paid off.

Now South Africa once again finds itself becoming saddled with debt that looks increasingly odious but unlike in the 1990s, also looks less sustainable – the worst of both worlds.

“Our early projection is that gross national debt will be close to R4 trillion, or 81.8% of GDP by the end of this fiscal year. This is compared to an estimate of R3.56 trillion or 65.6% of GDP projected in February 2020,” Finance Minister Tito Mboweni said in his supplemental budget speech in late June.

… the global statistics are kinda scary. The UK government has now taken on over two trillion pounds in national debt for the first time, over 100% of GDP. The US is also likely to breach the 100% mark, a level many European countries reached some time ago. And then there is Japan with debt of 237% of GDP.

In 2010, the ratio of national debt to GDP was close to 35%. It ballooned steadily under former President Jacob Zuma in part to feed the ANC’s patronage machine during a period when service delivery protests were also on the rise. This strongly suggests the additional state expenditure was not translating into laudable goals such as improved public services for the poor. Tens of billions of rand and probably more have also been stolen or misspent, sucked down the “state capture” drain.

That makes much of South Africa’s current debt odious. And its trajectory, according to analysts, is not sustainable in the long run, not least because the economy is not growing. The second-quarter contraction is expected to be massive, and projected growth rates are not high enough to meaningfully reduce the debt to GDP ratio.

“Revenue is declining and South Africa cannot get the economic growth levels needed to right this situation. You need real GDP growth of 3 to 3.5% to get the debt to GDP levels lower. Investors are also taking a forward-looking view that South Africa does not have the political capital to turn the boat around fast enough, either for fiscal measures or reforms for higher potential growth,”  Peter Attard Montalto, head of capital markets research at Intellidex, told Business Maverick.

The argument about debt is deeply affected by two international events.

The first is the world’s experience of the 2008/9 financial crisis, during which governments put rescue packages into effect by increasing national debt measurably. But because the economic rebound was slow – it took almost a decade in many placed for employment levels to return to post-crisis levels – there is something of a consensus now that the rescue packages were too small.

At the time, politicians fretted that raising debt levels would lead to higher inflation, but miraculously, the inflation never arrived. Consequently, this time, the idea is to overstimulate in the face of the economic effects of Covid-19 rather than understimulate, in the hope the rebound will happen faster.

The second issue is that global interest rates are much lower, indeed negative in some parts of the world. Hence, while the debt levels are higher, the amount governments are paying for the debt has declined and is generally more manageable.

South Africa is a good example. Just after the first democratic elections, SA’s debt to GDP ratio was 47% of GDP, much lower than it is today – but at that point, SA was close to the so-called “debt trap”, where an entity has to borrow to service its debt, thereby increasing its total debt further, requiring ever greater borrowing.

But, of course, if SA’s debt ratio increases to over 100%, which it could, and interest rates don’t come down, which is unlikely, SA could easily enter debt-trap territory.

There are few things in economics more misunderstood than government debt, because people tend to conflate it with personal debt. But they are different. The national debt is owned by its citizens, so a country effectively owes money to itself. But it does raise the issue of generational fairness because future generations will have to bear the cost.

And the global statistics are kinda scary. The UK government has now taken on over two trillion pounds in national debt for the first time, over 100% of GDP. The US is also likely to breach the 100% mark, a level many European countries reached some time ago. And then there is Japan with debt of 237% of GDP.