Joburg pensioners sleep on street after being thrown out of flats 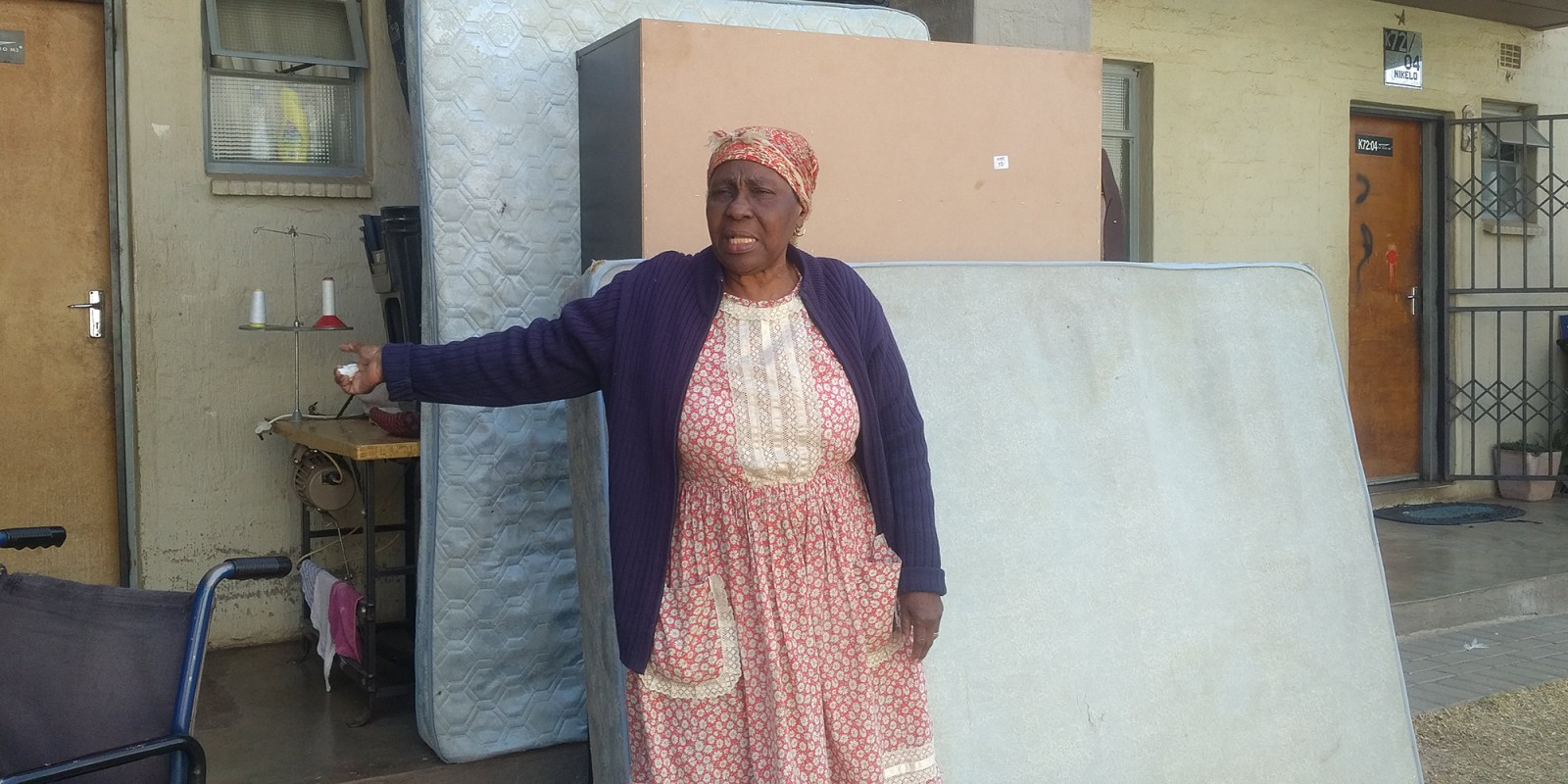 Edith Sihube, 73, points to her neighbours, where her belongings were being kept safe while she and her ailing husband looked after the rest. The Sihubes were evicted after illegally occupying a property since 2017. (Photo: Bheki Simelane)

A number of pensioners spent several nights out on the street last week after the City of Johannesburg ordered their eviction from a block of flats they had been illegally occupying since 2016.

Several elderly pensioners had to sleep on the street last week after they were evicted from the Fleurhof flats in Soweto they had called home for almost four years.

On Tuesday 25 August the sheriff along with the infamous Red Ants arrived at the flats and evicted about 100 people including pensioners and children. This, according to residents, was the second time the Red Ants had descended on the area in recent weeks, with an earlier eviction taking place on 12 August.

“The operations were carried out by the sheriff of the court after the developer obtained the eviction order,” said City of Johannesburg spokesperson Nthatisi Modingoane.

“The first operation on 12 August had to be called off after there was a fatality, which is being investigated by the Independent Police Directorate (IPID). The second operation had to be undertaken to enforce the court order and make room for the units to be handed over to government for allocation of rightful beneficiaries.”

According to the developer’s website, Fleurhof is a 440ha privately owned property in the process of being developed in partnership with the City of Johannesburg and is set to be one of the largest integrated housing developments in Gauteng. On completion, it will provide housing for an estimated 83,000 people.

Following the 12 August evictions, Human Settlements Minister Lindiwe Sisulu condemned illegal land invasions and said they were perpetrated by people who occupied the flats to strongarm the department to provide them with RDP houses on a preferential basis.

Edith Sihube, 73, told Daily Maverick that she had never had a problem since her arrival in the area in 2017. Sihube was in her house with her ailing husband and family when the Red Ants struck.

“They said nothing except to throw our belongings out,” she said.

Sihube’s ill husband was thrown out of bed, and pleas from Sihube to spare him were ignored. “They don’t want to hear anything, it’s impossible to reason with them,” she said.

Sihube said it was appalling that the very government that they have been voting for over the years was throwing them out on the street.

“When they want you to vote for them they take you to the polling stations, even when you are sick, but this is what we get in return.”

Tshidi Madisakwana, a Meadowlands Community Forum leader, who is also listed as the first respondent in the court order authorising the evictions, said the evictees had nowhere else to go as most had called the place home for almost four years, and some had children enrolled in schools in the area.

“This is a government that doesn’t care,” said Madisakwana.

Residents said they illegally occupied the flats in 2016, and that authorities had not removed them then because they wanted their votes.

“Now they feel it’s the ideal moment, one they think won’t influence our voting patterns. This government has no shame,” said Madisakwana.

Several of the people Daily Maverick spoke to said they were in possession of government C-forms. These forms are an indication that the person had applied for government housing and is on a waiting list. But many don’t believe such a list actually exists.

Said Madisakwana: “Many of those people are from Meadowlands. They have been patiently waiting for houses, but told they are not next in line despite being in possession of C-forms and some having registered in 1996.

“Now that they have thrown the people out, where do they expect them to go, because they have nowhere else to go?” asked Madisakwana.

Many residents stayed up the whole night looking after what was left of their belongings, claiming that several items had been stolen during their eviction.

Shadrack Moabi, 76, who suffers from malignant hypertension, said he arrived in the area in 2017 and had never had a problem until he was thrown out.

“They said nothing. They just tossed out my belongings,” said Moabi.

Moabi’s bed and TV were missing after the eviction, he said.

“Authorities promised us houses; instead, the little that we have is being stolen from us. How would that make you feel?” asked Moabi.

Another eviction victim, 73-year-old Francina Tabola, who also arrived in the area in 2017, said she no longer cared about voting for anyone after supporting the ANC all her life.

“What do I have to show for that, except for a meagre grant? My wish was to die in my own house.”

Tabola said a number of her possessions were stolen during the eviction, including blankets, a phone, a TV and an electric kettle.

“Can this government please come and help us. Why are my things missing?” she asked. When Tabola, who suffers from high blood pressure, spoke to Daily Maverick she had not eaten in 24 hours.

Asked why the flats had remained empty for so long, the City’s Modingoane said the site was still under development and had not yet been handed over to the government for allocation.

Asked where the people evicted should go, Modingoane said, “A court order does not put conditions on the developer. Illegal occupation is a crime and should not be seen as means to be rewarded.”

Modingoane said the eviction did not flout lockdown regulations as “different levels of lockdown come with a different set of rules. The court… take these regulations into account. A competent court of law arrived at a decision to grant an eviction order which got enforced by the sheriff of the court.” DM