Child trafficking and child migration: A new discussion is needed to separate myths from reality 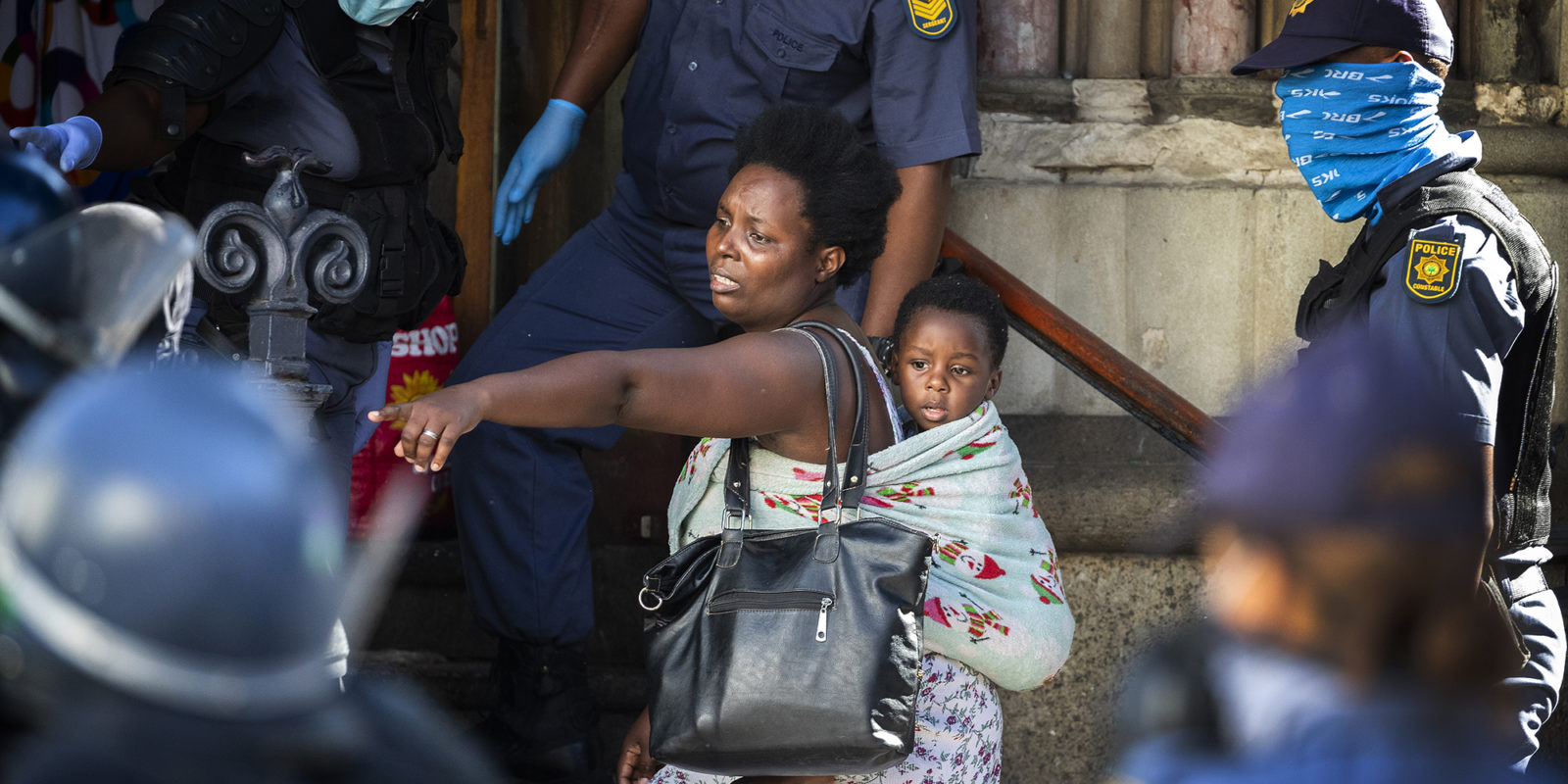 A mother and child, part of a group of African foreign nationals, are moved by South African police out of the Central Methodist Church in Cape Town in April 2020. (Photo: EPA-EFE / Nic Bothma)

There are concerns that unsubstantiated claims about child trafficking are being used to restrict migration and increase the securitisation of borders. Exaggerated and sensationalised claims are shaped and driven by the media, while some anti-trafficking organisations and scholars unquestioningly reproduce, circulate and lend credence to unsubstantiated reports and research.

On Friday 21 August the University of Pretoria’s Centre for Child Law in collaboration with the University of the Witwatersrand’s African Centre for Migration & Society (ACMS) released a research report, “Child trafficking in South Africa: Exploring the Myths and Realities”.

The report and policy brief form part of the Centre for Child Law’s efforts to show the realities and complexities shaping the lives of vulnerable children in South Africa and to recommend ways of reducing the vulnerabilities they face.

The study sought to identify the gaps in current knowledge on child trafficking and consequences on the lives of children on the move. It followed concerns that unsubstantiated claims about child trafficking are being used to restrict migration and increase the securitisation of borders, which can impinge on children’s rights, especially undocumented migrant children. The study was informed by the experiences of unaccompanied migrant children and service providers, including government departments working with migrant populations in two border areas and two cities in South Africa.

One of the main findings of the study was that in the absence of reliable information and data on child trafficking, policy and practice is largely assumption-led, rather than evidence-based. Furthermore, exaggerated and sensationalised claims about child trafficking are shaped and driven by the media while some anti-trafficking organisations and scholars unquestioningly reproduce, circulate and lend credence to unsubstantiated reports and research.

During a Zoom webinar held to launch the report, the study was welcomed by many for raising some of the complex and layered issues. It also faced critique, particularly from individuals whose work is focused on child trafficking from an advocacy and prosecution perspective. The mixed responses led us to reflect on some of the key sticking points and to expose some of the barriers that prevent a more complex and nuanced discussion and understanding of child trafficking, migration and child rights.

Child trafficking is an emotive issue. The imagery and stories of children’s suffering elicit such a strong sense of panic and urgency that questioning of the accuracy and origins of such claims is rarely done and tolerated. The findings of this study echo findings of other, solid, empirical studies in South Africa and elsewhere, which show that child trafficking does not fit with the key myths such as children being primarily trafficked into the sex trade and that trafficking is the primary concern for children on the move.

In fact, it showed that the vulnerabilities most children face are the physical dangers of crossing borders, the threat of violence and exploitation including sexual exploitation (which does not always amount to trafficking), and the continued challenges of life without documentation.

This is important because a single-story narrative shaped by unsubstantiated myths cannot drive policy, legislation and public spending. These processes must be based on sound empirical evidence from a wide range of experiences, including by children themselves. At best, myths about trafficking increasingly drive political decisions on migration policy, leading to policy and regulation that misdirects scarce resources from interventions that can make a difference to a child’s life. At worst, trafficking of people is used as a political tool to obscure or justify anti-immigration policy and practice.

Denial of migration as integral to trafficking discussions

During the webinar, the title of the report was critiqued as being misleading, with the suggestion that the wording should have referred to child migration rather than child trafficking. Yet, the study’s findings show that it is short-sighted to argue that migration and related challenges are not a part of the discourse of child trafficking. Furthermore, obscuring the content of the study, by focusing primarily on its title is a calculated strategy to ensure that the conversation does not engage with substantive matters raised in the content of the report.

In certain circles of the anti-trafficking discourse, claims that an army of people are denying that trafficking happens actually misses the fact that the opposite is true. On social media, or schools’ WhatsApp groups, people seemed to be primed to expect more and more bizarre strategies to traffic children (heard about the danger of children wearing masks? see here).

The study itself was never intended and does not claim to provide a generalisable picture of the scale and scope of child trafficking in South Africa. Measuring trafficking is difficult not only because the phenomenon of trafficking is by its nature a hidden crime but also because of different interpretations of legislation, a lack of emphasis on reliable databases and that victims may not be willing/comfortable to speak out.

However, as with our study, there is a need for a starting point through which key issues can be identified, “fact” and fiction discerned and as a basis for a much larger study. The researchers recommend that future studies look beyond trafficking to a more detailed and informative picture based on recognition that the push to engage with complexity is also a push to provide better and more widespread protection for children – migrant and undocumented in South Africa.

One of the key findings of the study was that despite practitioners and service providers, including SAPS, stating that they dealt with very few cases of trafficking – much of the irregular movement across borders, including smuggling and sex work, was labelled as trafficking anyway. While it’s important to focus on the definition and meaning of human trafficking, this should not be at the expense of understanding how the label of trafficking is used, by whom and the effect of its application on rights – particularly to access to documentation and education. A denial of documents, often in the name of trafficking, leads to heightened vulnerabilities for children which will have an impact on every area of their lives.

Need for a different discussion and different ‘experts’

Many of the questions and comments made during the webinar demonstrated the importance of the discussion, and the need for more and better research. They also emphasised the need to include a wider range of experts willing to engage openly and be able to look beyond the media stories, moral policing, social media hype, and largely discredited and outdated reports. These experts should include those experienced in working on human trafficking, child migration and child protection as well as child migrants and other marginalised groups themselves.

Diversifying the voices at the centre of this discourse will show that the reified and sensationalised picture of child trafficking and children who cross borders is neither acceptable nor useful in working collectively towards ensuring the protection of child migrants AND children who fall victim to trafficking. DM

Dr Rebecca Walker is a research associate with the African Centre for Migration & Society (ACMS), at the University of the Witwatersrand. Her work broadly focuses on the areas of gender, migration, and health. Since 2014, She has conducted research with migrant sex workers, and on issues related to trafficking.

Dr Stanford Taonatose Mahati is a research associate at the African Centre for Migration & Society (ACMS) at the University of the Witwatersrand, He specialises in the sociology and social anthropology of childhood, child migration, displacement and public health. He has extensive experience in conducting research and has published (independently and collaboratively) in these areas.

Sally Shackleton works for Frontline AIDS, as Lead HIV Technical: Key Populations. She has worked in civil society organisations for over 25 years, always with a focus on the rights and freedoms of marginalised populations, including sex workers.

Isabel Magaya is a project coordinator and researcher at the Centre for Child Law and holds an LLB and an LLM (Child Law). She is responsible for primary research and also monitoring and evaluating the impact of cases litigated on by the centre. Magaya is also a doctoral candidate with research focusing on protecting children against violence in three southern African countries.