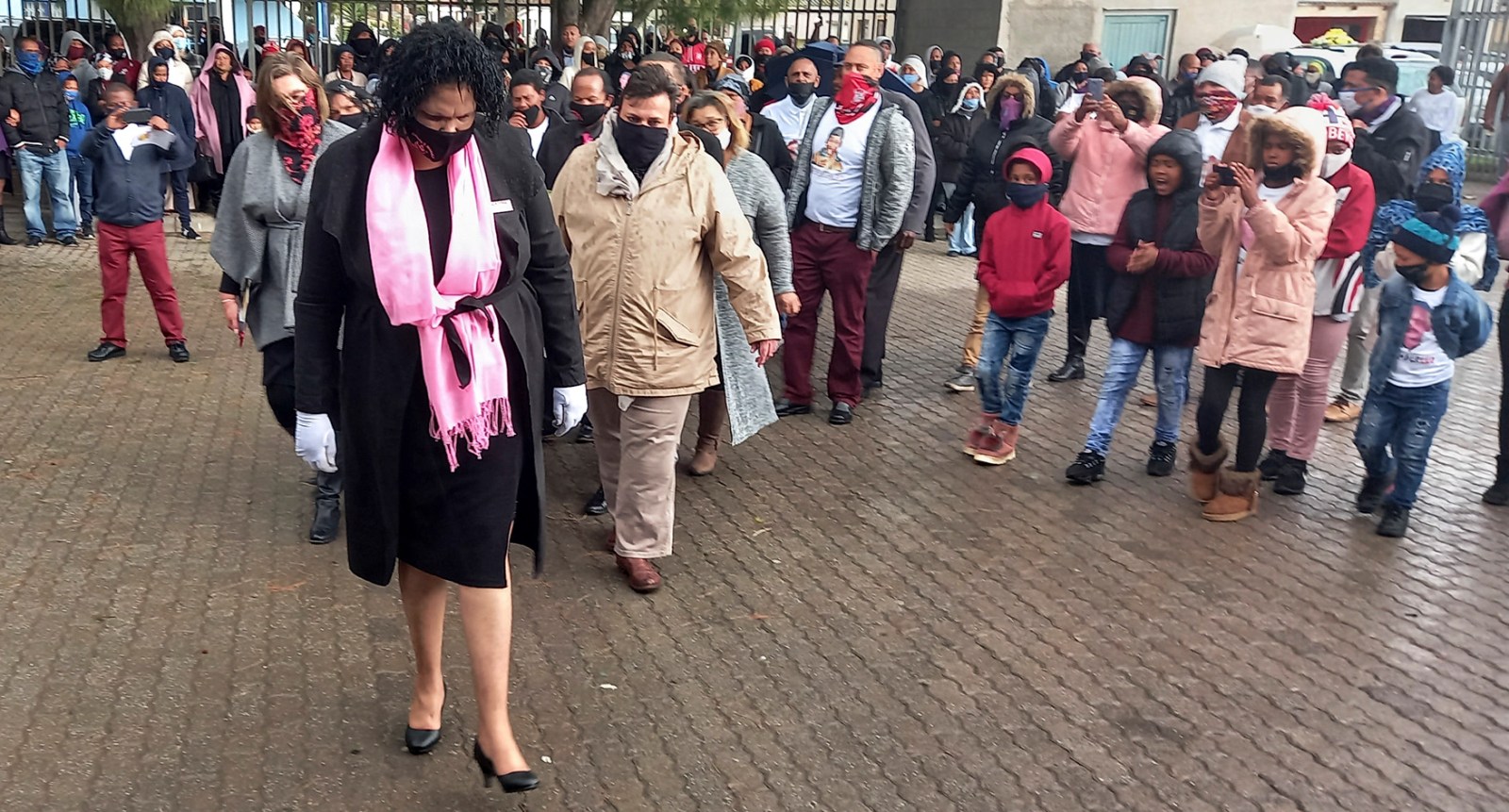 ‘As a community leader, I’m worried about what can happen. There is already a planned march for Monday 31 August and we as community leaders were asked by the group Justice for Leo to take a back seat. The situation is volatile, but the message that came out on Saturday was a call for calm. At this stage of the fight, I cannot guarantee that our community is going to remain calm.’

“Before the tragic death of nine-year-old Leo Williams I didn’t greet you or go into your house, but his death has brought about a paradigm shift in Laingville and today the community is more harmonious than before.”

This was the reaction from Belinda Klaase who was part of a group of women who spent most of Friday night until the early morning of Saturday 29 August, preparing potjiekos for the mourners who attended Leo’s funeral in the West Coast town later that day.

Klaase said: “His death had to happen to open the eyes of the community and unite them. Today Laingville speaks as a community and not as individuals. His death was not in vain and it is sad he had to pay this price.”

On the day of the funeral only 50 mourners — including family members — were allowed inside the community hall. This was in line with Covid-19 regulations. However, after a heavy downpour, the large crowd standing outside the hall rushed in. The hall was packed to capacity with residents who came to bid farewell to Leo.

Leo sustained a head wound on Friday 31 July following violent clashes between police and residents that emanated from a housing protest. The boy was playing with his friends inside a half-empty part of a corrugated-iron structure belonging to his uncle.

A video clip handed to the Independent Police Investigative Directorate (Ipid) clearly showed four police officers firing indiscriminately at the shack. The shack was riddled with eight holes. Leo died on Monday 17 August when doctors switched off life support machines. His biological mother Lucille Williams and his legal guardian, Aunty Cathy Thomas — as she is known to all in the community — witnessed this agonising final moment.

Pastor Leo dos Santos from Johannesburg, who was deeply touched by Leo’s death, flew down to deliver the sermon at the boy’s funeral service. When he said the Saldanha municipality should prepare to name a street in Laingville in honour of Leo, Aunty Cathy jumped up and shouted: “Let’s change Laingville to Leoville.”

A contrasting scene during the funeral service was the strong and contained Aunty Cathy who praised and worshipped with mourners, while Leo’s biological mother cried uncontrollably and was comforted by family members.

While paying tribute to the child Aunty Cathy raised since he was three, his Grade 2 classmates of EJ Malgarte Primary stood in front of his casket holding toys made out of milk cartons.

“If Leo was alive today, he would have wanted to become a mechanic. He spent his days making toys from milk boxes. Leo’s death was not in vain and the hidden message out of this tragedy is that we as a community must unite,” Aunty Cathy told mourners.

South African Human Rights Commissioner Chris Nissen, who attended the funeral, emphasised that in the past few weeks the country had seen incidents in Eldorado Park, Laingville and Moorreesburg where people had been killed, allegedly by SAPS members.

Sixteen-year-old Nathaniel Julies, who had Down Syndrome, was allegedly shot dead in Eldorado Park on Wednesday 26 August. At the time of the incident, police claimed he was caught in the crossfire between police and gangsters. But an eyewitness has reportedly debunked these allegations and alleged police had shot him, put him in a police van, whisked him away and later covered the bloody scene with sand to remove evidence. Two days after the incident Ipid indicated that two police officers had been arrested in connection with the incident.

“I want the same swift action that resulted in two police members arrested in Eldorado Park to be replicated in Laingville. I’m meeting with Ipid this week. I have requested we need to have some answers around Leo, Manfred Lewis, 34, allegedly assaulted by police in Moorreesburg and (who) later died in custody, and an eight-year-old boy killed by a stray bullet during protest action in Elsies River.

“However, in the Elsies River case it was more the case of law enforcement and we still need to establish that. But clearly in Laingville and in Moorreesburg it is a matter of allegedly SAPS being responsible. Those were close-range shots” at the structure Leo was in, Nissen said.

Laingville community leader Thyrone Williams underlined that although the funeral was emotional, it was successful and went ahead as planned to bury Leo with respect. However, on what would happen now and the way forward, Thyrone was unable to give an answer.

“It is difficult to say because our people are again fuming in terms of the incident that happened in Eldorado Park. The day after the shooting of Nathaniel, two officers were arrested, but a month has passed since the shooting of Leo on 31 July and his death on 17 August, but yet no one has been arrested.

“As a community leader, I’m worried about what can happen. There is already a planned march for Monday 31 August and we as community leaders were asked by the group Justice for Leo to take a back seat. The situation is volatile, but the message that came out on Saturday was a call for calm. At this stage of the fight I cannot guarantee that our community is going to remain calm,” he explained.

This sentiment was echoed by mourners who remained adamant that SAPS members shot Leo, adding they wanted the suspects to be arrested and brought to court. Residents said that for as long as this situation persisted, the quicker simmering tension would reach boiling point. There is also a sense among residents that the wheels of justice did not turn as quickly as they were supposed to.

Meanwhile, on Sunday, 30 August, the community of Moorreesburg paid their last respects to Lewis, who was allegedly killed by police and later died in police custody on August 20. Ipid has confirmed it is investigating a case of police brutality.

Advocate Venice Burgins, executive director at Ukubavimba Foundation, said the intelligence received was that severe police brutality occurred, and as a result, Lewis died. Burgins said the worst atrocity was the refusal by SAPS to allow the mother to see her late son.

“Ipid has on Friday, 28 August arrested two members attached to the Eldorado Park Crime Prevention Unit who were implicated in the alleged shooting of 16-year-old Nathaniel Julies in Eldorado Park.

“The directorate made this decision after carefully considering the evidence acquired thus far. The pair will be charged with murder, possession of prohibited ammunition and possibly for defeating the ends of justice. They are scheduled to appear in the Pretoria Magistrate’s Court on Monday 31 August.”

“Those responsible for shooting and killing our children must be charged and prosecuted.

“We have had over 500 community protests in recent months. According to a report released by Ipid in Parliament last month (June 2020), 286 cases were investigated from the Western Cape, which included 227 complaints from assault, eight deaths as a result of police action and three deaths in police custody.

“The frequency of complaints and reports of police brutality and indiscriminate shooting have increased as well as the number of children beaten up, shot and killed,” Solomon said. DM/MC