Health officials in Gauteng placed orders for personal protection equipment (PPE) and other products related to the fight against Covid-19 at a cost of more than R500-million above market-related prices.

Scorpio’s month-long data deep dive into the Gauteng Department of Health’s (GDH) procurement of products like face masks, surgical gloves and hand sanitiser reveals that department officials ordered a range of items at a cost of R1.28-billion, while these same items could have been bought at a cost of only R776.5-million.

This means the GDH’s contentious PPE suppliers collectively inflated their prices by a whopping R507.5-million, or 65%, compared to goods on offer in the open market. Scorpio only managed to assess about half of the GDH’s total expenditure for PPE and related goods. The total over-expenditure figure could grow as more data on government’s expansive PPE procurement drive becomes available. 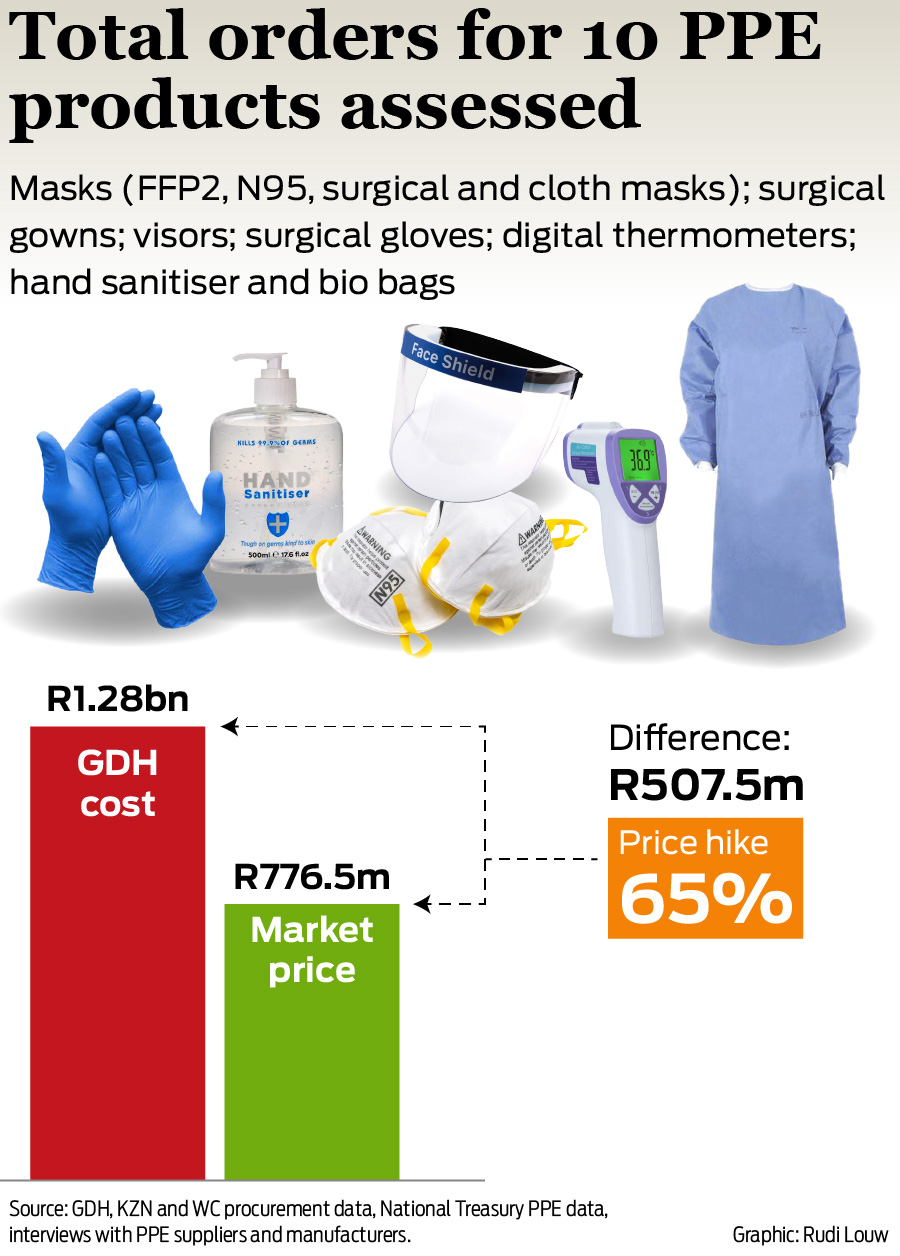 Another startling finding from our analysis is that more than R500-million, or a quarter of Gauteng’s PPE spend, was paid to companies that were only registered as suppliers to the province after South Africa’s state of disaster was announced in mid-March.

The GDH did not want to respond to our detailed queries.

“As you are aware, the issue [of] PPE procurement is currently under SIU [Special Investigating Unit] investigations and dealt with by the Office of the Premier,” said department spokesperson Kwara Kekana.

“The questions that you are raising all form part of the scope of the investigation. The Gauteng Provincial Government hopes that the investigation by the SIU will help establish the truth about what happened in the procurement of PPE,” Masebe stated.

Our investigation reveals that respirator masks, theatre gowns and visors were especially subjected to extreme mark-ups.

The pandemic did bring about market-wide price hikes due to stock shortages and related supply problems, but we factored this into our cost analysis. The market prices against which the GDH suppliers’ rates were compared are reflective of a wide range of offerings from rival suppliers during the same timeframe. These base figures include profit margins, so the GDH suppliers hiked their prices well above much lower prices that still turned a profit for other suppliers.

Scorpio analysed procurement data for ten items the GDH ordered from 44 suppliers between late March and May. The GDH orders were compared to more than 70 prices captured in PPE expenditure reports from other provinces, along with the National Treasury’s (NT) lists for transversal contract suppliers. We also directly obtained prices from select suppliers and manufacturers.

The basis for this study was a leaked dataset that contained the names of some of the GDH’s PPE suppliers, along with the costs for each item ordered.

The basket of items Scorpio focused on were those that could most readily and reliably be subjected to price comparisons. These are FFP2 and N95 respirator masks, surgical masks, cloth masks, biohazard bags, surgical gowns, visors, digital thermometers, surgical gloves and hand sanitiser.

The orders captured in the leaked dataset don’t exactly align with figures for the GDH’s completed purchases, but the Gauteng provincial government’s Covid-19 expenditure disclosure report showed that they weren’t very far off the mark. For instance, Scorpio’s analysis of the R1.28bn worth of products ordered from the 44 suppliers compares to just over R1-billion in eventual payments to the same companies.

The conclusion that the GDH overpaid its suppliers by at least R500-million is further supported by the fact that our analysis is based on expenditure of only around R1-billion, while the Gauteng disclosure report indicates that the GDH ended up spending just shy of R2-billion. This means an amount of more than R900-million in Covid-related purchases by the department is yet to be properly scrutinised.

Considering that the GDH is but one among scores of provincial and national government departments, the possible overpayment of R500-million will fuel concern that government’s rush for Covid-related goods might have brought about a collective over-expenditure figure that may run into several billion rands.

This apparent raid of public coffers could partly be blamed on the fact that government officials routinely tend to procure goods and services from opportunistic entities and businesspeople who don’t normally operate in the relevant industry sectors.

“You don’t see companies like ours going out to tender for RDP houses or engineering projects. Why did government now suddenly procure PPE goods, which we’re licensed to sell, from companies that normally operate as IT service providers, building contractors or engineering firms?” lamented Kingsley Tloubatla, chairperson of the Black Pharmaceuticals Industry Association (BPIA). The BPIA is South Africa’s only industry body for black-owned companies in the pharmaceuticals and medical goods sector.

There are currently more than 20 BPIA member companies. Shockingly, only two of these appear on the GDH list of more than 40 companies we looked at for this investigation. This includes Bliss Pharmaceuticals, a company Tloubatla founded in 2005.

Expenditure data from Gauteng’s Covid-19 disclosure report confirms that the pandemic attracted scores of businesses that hadn’t previously done business with the provincial government. Most of these companies did business with the GDH, which accounted for 92.3% of the province’s total Covid-related spend of just over R2.1-billion.

Of the 361 companies that got paid by the province, 47 were only registered to the central supplier database (CSD) after 15 March, the day on which President Cyril Ramaphosa announced the country’s state of disaster.

Although these Johnny-come-latelies only make up 13% of all recipients of Covid-related payments, they bagged a disproportionate slice of the province’s Covid spend – R531.6-million, or more than a quarter of Gauteng’s total Covid-related expenditure, was paid to companies registered to the CSD after 15 March.

Anecdotal evidence, along with our data analysis, suggests that goods and services procured from non-specialist companies, like those that were hastily registered to secure PPE contracts, are hugely more expensive than those available from known and established industry players.

“You’d see a series of middlemen involved, each adding their own mark-up. Someone would come and buy goods from us, but they won’t even be the company supplying government. The ultimate supplier would buy from the person who bought from us, which significantly increases the price that government ends up paying,” explained one manufacturer of hand sanitiser.

Some of our sources claimed the state of disaster inspired a frenzy of “extreme profiteering” on the side of both new and established contractors. This seemed to be most clearly manifested in the GDH data for orders placed to source respirator masks.

The GDH ordered just over three million N95 masks from 10 suppliers at an average cost of R61 per mask. In all, the department was due to pay these companies R200.3-million. Our research shows there were far more cost-effective options available and that the masks should have cost only R76-million.

No less than three businesses on the NT’s transversal list offered N95 masks for less than R20. One supplier in KwaZulu-Natal could even supply them for as little as R7. For our price comparison, we set the base price at a very generous R24 per mask. This showed that the GDH may have been ripped off to the tune of nearly R125-million on these items alone. 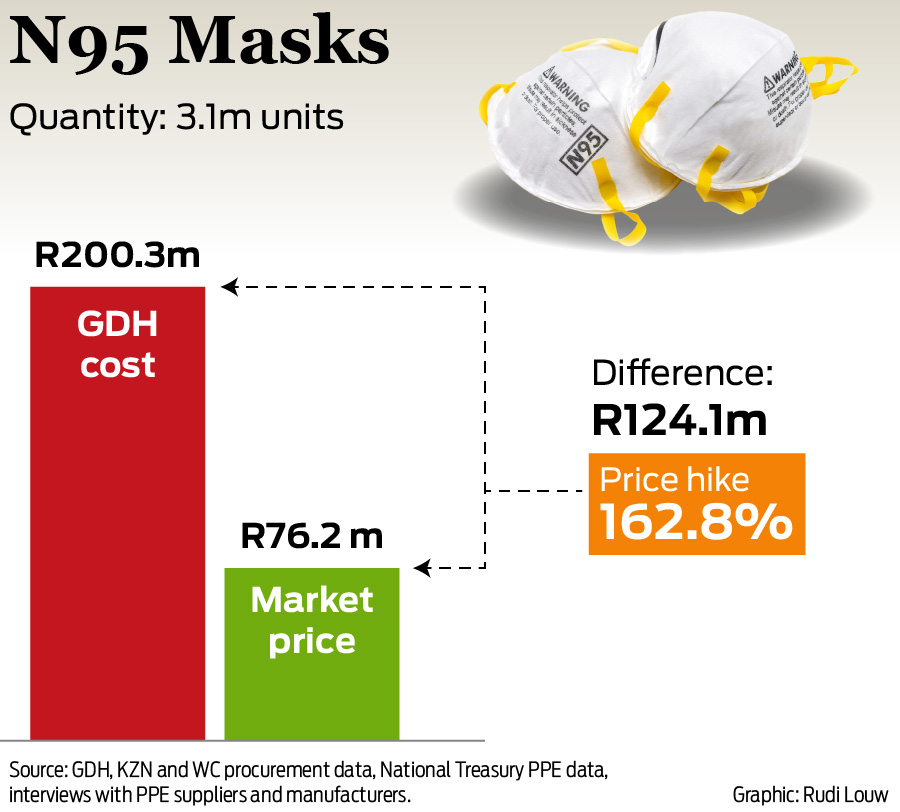 Nkhane Projects and Supply, one of the GDH suppliers, offered its N95 masks at R74.75 per unit. This constitutes a 211% price hike compared to the market-related base price. The company, which has no obvious footprint in the medical goods or PPE sectors, ultimately pocketed at least R110-million for masks and other products it delivered to the GDH, according to the Gauteng disclosure report. Businesswoman Zama Phakathi, Nkhane’s director, attended Gauteng Premier David Makhura’s state of the province address in 2017 [see picture].

Phakathi vowed to answer our queries once she and her company had been interviewed by the SIU.

The province’s orders for FFP2 masks also contained prices that were much higher than comparable market rates. Our research, which incorporated prices from two suppliers in KZN and one in the Western Cape, reflects an average price of R31.80 for FFP2 masks at the time the GDH placed its orders.

Disposable theatre gowns could have been purchased in bulk for around R90 per unit during the time the GDH placed its orders. Our base market price is a composite of prices reflected in the Western Cape and KwaZulu-Natal’s procurement records, along with some examples from the open market. Two suppliers in KZN offered gowns for R60 and R28.75 respectively.

The GDH, on the other hand, ordered 1.5-million gowns at a cost of R251-million from five suppliers, for an average unit cost of R170.50. The GDH could therefore have saved taxpayers at least R111.5-million on these items alone had it sought more competitive prices. 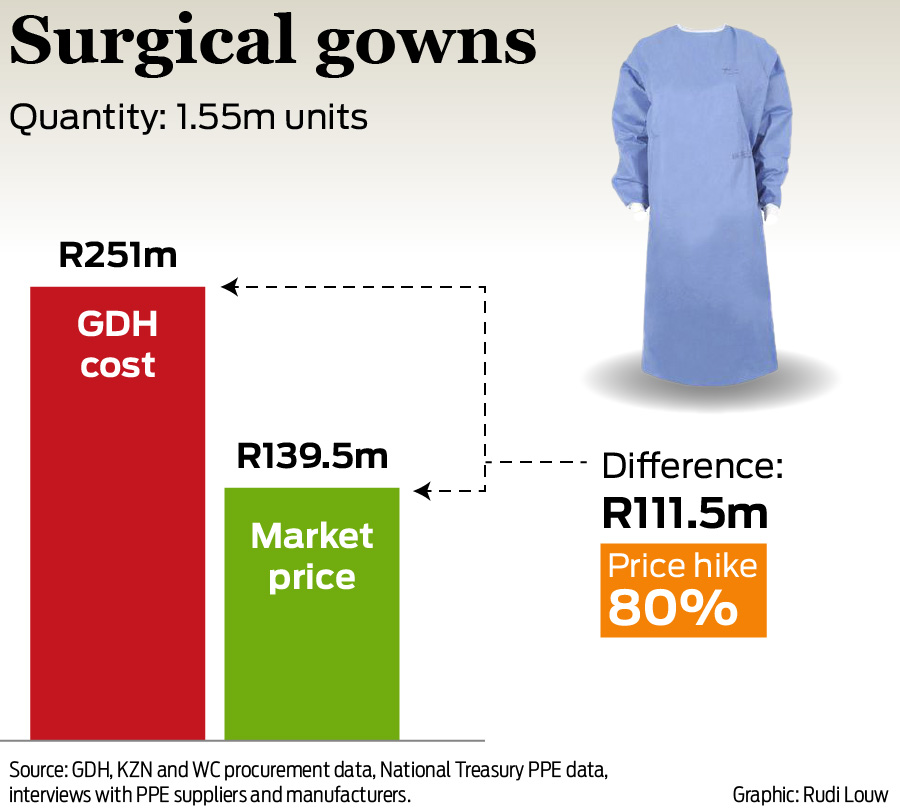 With a price of R240 per unit, a company called Mlangeni Brothers came out as the most expensive supplier on the GDH order list for gowns. This price was 166% above the market-related base price.

The company’s director, Elvis Stanley Nkuna, said he had already spoken to the SIU and that he did not wish to discuss his PPE orders.

Prices from 10 suppliers of visors in the period between late March and late May gave us an average of R37.50 per unit. These prices were on offer on the NT transversal list and in procurement data from the Western Cape and KZN governments. We gave the suppliers an extra bit of leeway and set our base price at R40 per visor, even though there was an offering from as low as R18 per visor. 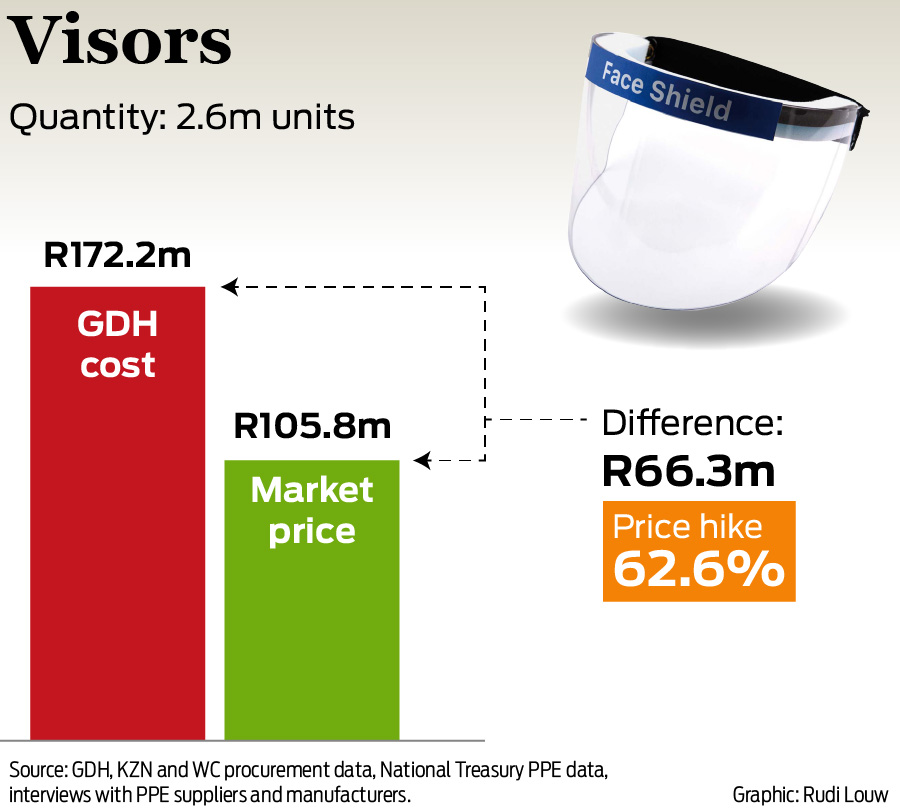 The remaining items we looked at reflected varying over-expenditure figures.

In all, our study suggests the GDH overpaid the 44 suppliers by R507.5-million.

It is worth repeating that this might turn out to be an extremely conservative estimate. Our comparative market-related prices were sometimes set at very generous averages, and we could only analyse about half of the GDH’s total spend.

All indications are that South Africans will eventually be confronted by harrowing over-expenditure figures once the country’s PPE procurement has been properly accounted for. DM

Ace vs Cyril: Crumble in the Jungle

Uganda: where running for political office is the equivalent of a death sentence

Let’s galvanise our schools into lighthouses of knowledge