Making of a monster 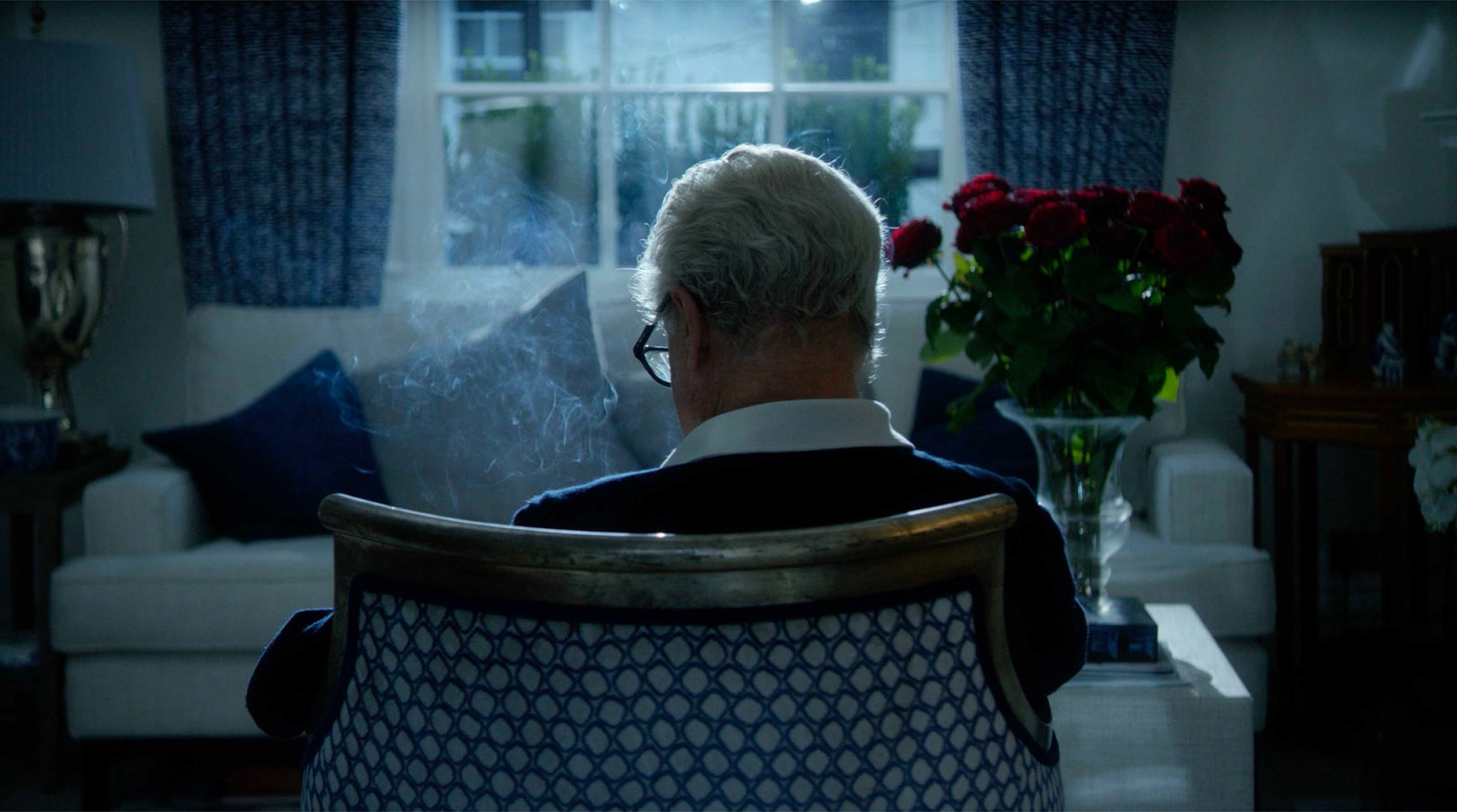 In a haze of grey smoke, Lord Tim Bell refused to take responsibility for his dastardly deeds. And today, his legacy is not one he wanted.

There was something specific about day three shooting my first feature documentary film, Influence, that landed me on the lower shelf of an empty cupboard in an Airbnb in Mayfair, gasping for air; crying like Shelley Duvall in the penultimate scene of The Shining.

As my co-director Richard Poplak and our cinematographer searched the crew house after I didn’t answer their calls for dinner — bewildered and ashamed as I was to suddenly find myself crouched in the dark, heaving, deriving no comfort from the flat-pack Formica — I wondered what it was about that specific day that had suddenly caused my ribcage to imprison my lungs with such vehemence. I couldn’t breathe.

I hadn’t been able to breathe for three days. We had been shooting non-stop in the tony Belgravia home of our main character, Lord Tim Bell, the British establishment’s aged James Bond, and the world’s most notorious public relations figure. He was a chain smoker’s chain smoker: the crew had spent the bulk of the last 72 hours listening to his life story ensconced in a grey haze, ingesting enough second-hand nicotine to give all our grandchildren cancer.

But more than the smoke, it was perhaps Bell’s testimony that had begun to weigh me down. As the co-founder of the now-defunct public relations multinational Bell Pottinger, Bell displayed a breathtaking lack of remorse and a degree of glee in recalling some of the work he had done: advising, obfuscating and whitewashing for despots, dictators, arms dealers and oil barons. None of it seemed to faze him: Over a 25-hour period he spoke either fondly or dismissively about many of his clients, calling them “people with problems”.

That day, I listened as he tried to abnegate personal responsibility for the racially divisive campaign Bell Pottinger ran in South Africa on behalf of the Guptas in 2016, even as he admitted to flying to Johannesburg to win the contract. He said he found Duduzane Zuma “charming”, Tony Gupta “boring”. It was incredible testimony to be capturing on camera, and the filmmakers in Poplak and I were doing backflips.

But Bell Pottinger’s campaign introduced new tools of malevolence and new levels of hatred into this vulnerable and divided country that will reverberate for many years to come. Sitting in Bell’s picture-perfect living room, it was hard to separate my professional obligations from my personal revulsion. The year before, after the now infamous Guptaleaks revealed Bell Pottinger’s role in state capture, I had witnessed a team of my colleagues at Daily Maverick, AmaBhungane and News24, along with opposition politician Phumzile van Damme, civil society and ordinary South African citizens, bring this man and his noxious multinational down in a righteous, David vs Goliath-style stand-off. Against the odds, we had won the battle for hearts and minds.

Regardless, filming him less than a year later, unrepentant and oblivious as he waxed lyrical about “immorality versus amorality”, I felt trapped in a sterile (and hazy) moral wasteland. It later occurred to me this might explain the impulse to climb into a wardrobe, close the door and scream.

There was one other thing in that cupboard, splayed leaden across my chest: Despite having devised of and developed the film to this point, I had an overwhelming sense of being out of my depth — an imposter in a scenario I hadn’t thought all the way through. Poplak and I had dared to take on the conservative establishment at the heart of the global public relations machine, and while he sipped wine with the crew in the kitchen, my current circumstances indicated I wasn’t up for the fight.

When Poplak found me, puffy-eyed and gasping on a shelf, he did what any good news hack-slash-co-director would do: He swallowed an enormous laugh; handed me a glass of Scotch; reminded me that it was my own doing that we were all in London, breathing the second-hand smoke of a malevolent septuagenarian for the third day in a row; and suggested both kindly and firmly that I harden the f**k up.

With Bell’s remarkable interview in the bag, Influence’s co-producers at Storyscope in Johannesburg and EyeSteelFilm in Montreal went on to successfully raise a not insignificant budget for a globetrotting, documentary film about the rise and fall of Bell Pottinger and the weaponisation of modern communication. Influence was officially on the road: In addition to London, Johannesburg and Cape Town, we travelled to Santiago, Baghdad and Washington DC over a period of eight months. It was a massive and exhilarating privilege.

We came to understand how a man like Bell had found dubious success in each of these places. In Santiago, as the emissary of former British Prime Minister Margaret Thatcher, Bell had run the right-wing campaign of the successor to the murderous general-turned-dictator, Augusto Pinochet.

In Cape Town, Bell had schmoozed the last apartheid president, FW de Klerk, into assisting with running the National Party’s 1994 election campaign. Bell helped the party secure a too-good-to-be-true percentage of the vote in the country’s first democratic election — enough to ensure them a strong bargaining position in the subsequent constitutional negotiations. (There’s a reason why “white monopoly capital” still evokes such vitriol, and it’s ironic that Bell Pottinger’s resurrection of it brought down the company 23 years later.)

Out of DC, Bell Pottinger won a $540-million campaign on behalf of the Pentagon. This entailed creating more than 600 “nation-building” adverts, soap operas and other skin-crawlingly obvious propaganda items to try sell the American occupation to Iraqis. (It didn’t work.)

Before he died in August 2019 of vascular Parkinsonism, Bell told us the bumper sticker for his career would read, “go anywhere, do anything”, and we retraced his journey to achieve this lifelong quest.

In doing so, the privilege of the job of telling someone else’s story and the reality of being a young woman attempting to do so clashed constantly. I was an imposter: a female calling herself a ‘director’ in a ruthless, conservative, old-school man’s world. Preposterous. Never mind that all these men loved Margaret Thatcher…

In London, our first cinematographer refused to let me see his monitor as he framed a shots. In Baghdad our unusually progressive fixer nevertheless apologetically told me that I could not only not get out of the van to shoot with the rest of the crew in a particularly conservative part of town. In Santiago, several of our interviewees took one look at me, the only female in the room posing questions from beside the camera, and interrupted me to ask for a cup of tea.

Lord Bell was a big fan of the status quo, and his ideology, his work — heck, even his jokes — propped up a version of the world not meant to belong to women, or black people, or gay people, or foreigners. He protected and promoted those who would cling to an old world order at all costs. But Bell is no longer with us. His company is shuttered, his fortune diminished by administrators and fines; his legacy forever etched in our collective memories, immortalised in a film about influence, co-directed by a woman. DM