Dining out with Woody Allen and pandemic paranoia 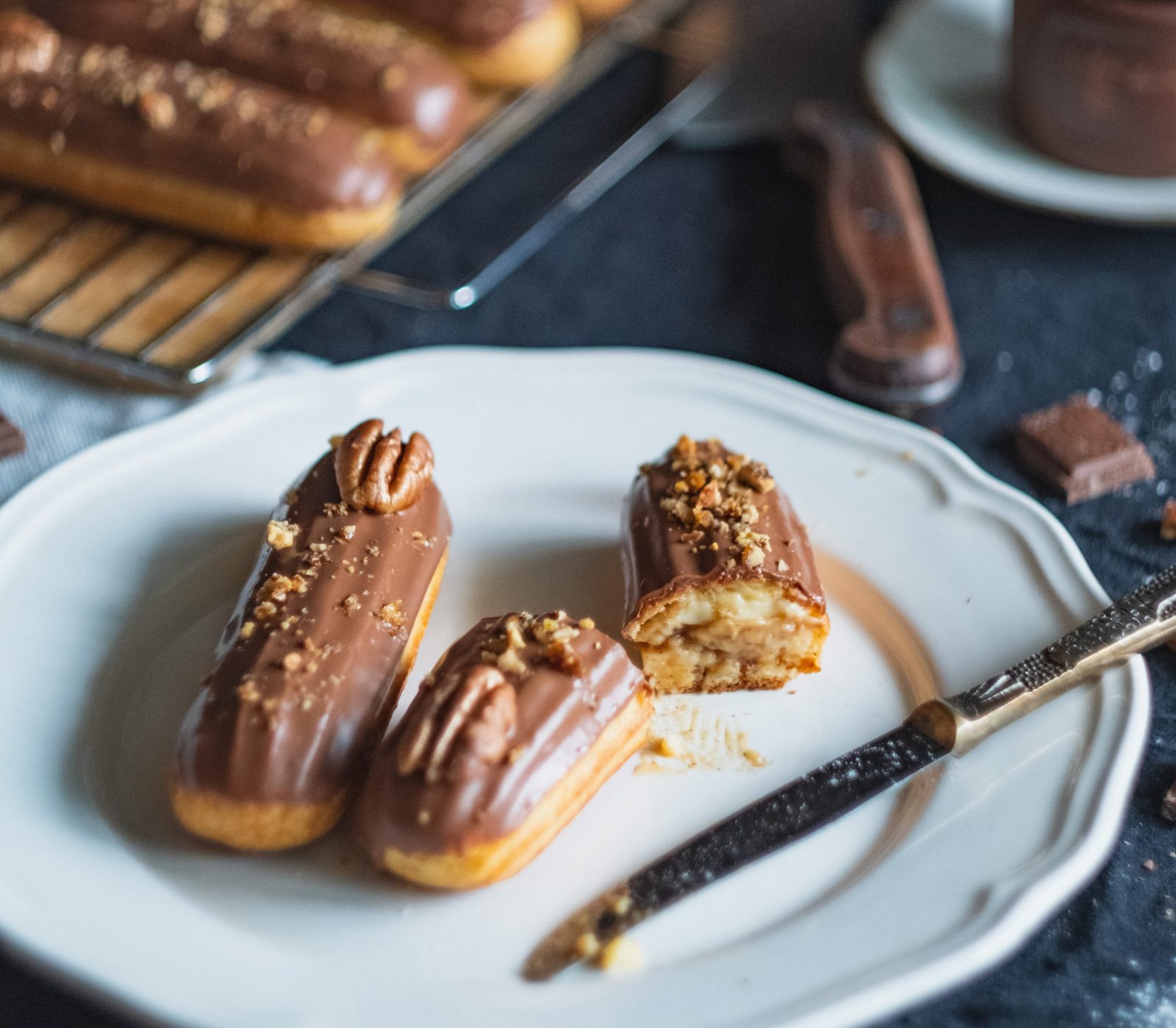 Helen made short work of her eclair. Maybe she had more. (Dilyara Garifullina on Unsplash)

Having a sit-down meal is more challenging for some than others.

Over the past few months, during this time of the spiky, bally thing that enjoys latching onto our bodies and hijacking our cells, I’ve had one sit-down coffee and two sit-down meals. While other more warrior-like urbanites might scoff at this, it’s a surprisingly large number for me, as, frankly, this whole pandemic malarkey has turned me into a neurotic even Jung would have found confounding.

To be more psychologically accurate, I’ve developed more of a split personality than straight-up neuroses. The Helen that plaits her hair in a playful fashion and eats Madeira loaf for breakfast throws caution to the virus-loaded wind and skips through aisles of gin and throngs of dog-walkers and scores of unmasked teenagers and even THE MALL, feeling resigned to the pandemic. She smiles at elderly men shuffling with sticks and walking aids into Woolworths, their large ears corralled by their mask elastic. “Aw, cute!” she thinks. “Good for them! Getting out and about!” The plaited one stops and chats with car guards and gives them pies. She uses her actual fingers to punch in her PIN on card machines and has started dreaming of hot yoga and sharing lime milkshakes with her father.

But most days, the other Helen dominates – the one who resembles Woody Allen on cough mixture, hiding under the duvet, terrified of the world beyond the front door. She nervously fingers the Checkers delivery, uses her car key to punch in her PIN code, glares at elderly men with their big ears and the way they dither in front of fridges, and last week may have threatened a man fixing the roof with a bottle of sanitiser.

So, yes, it’s surprising I have eaten out at all, though both times were at the behest of my husband, who is pragmatic and wears a watch and analyses microbes for a living.

The first meal was unplanned. We were at the plant nursery buying basil and lettuce, as middle-class people do during a global catastrophe. We hadn’t had breakfast, and I was starting to show too much interest in a concrete frog ornament. “Come. Let’s have lunch,” B nodded in the direction of the on-site café. I clutched the frog to my chest. “We have leftovers at home,” I said. “It looks Covidy.”

There was no one sitting at the outside tables.

We sanitised our hands at the entrance. No one took our temperature or recorded our names, though the waitress did scurry in front of us to our chosen spot under the tree and sanitised the table and chairs. Not two minutes after sitting down, I needed the loo. Now, in the days BC (before Covid-19), I was never a germaphobe. I ate dropped apple slices off the floor, kissed my dog on the mouth and embraced the feeling of handrails. In Matric, my friend and I would play a game during our lunch-break prefect patrols where we had to take turns eating whatever we came across on the floor. I once ate a stepped-on egg mayonnaise sandwich.

In the days BC, I was also never a strictly hover-only girl in public toilets. Some days, it just felt like too much of a workout. And I’ve never been scared of filthy lavatories – I once peed in a toilet at a petrol station in the middle of Patagonia that looked like it had been digested and spat out by a camel.

But now sitting under a tree under a sun umbrella under a sky threatening to rain under lockdown Level 3, I bit my lip.

“Use your sleeves,” B said, seeing my face.

Back at the table, I sanitised my hands so much that fruit flies started to swarm around my hands. Which is all ridiculous, as I then picked up the cappuccino cup, pulled off my mask, licked the teaspoon, ran my fingers over the menu, fiddled with the sugar bowl and nearly kissed the waitress when she brought our food. After four months of eating our sad home-cooked creations, my plate of spinach and feta quiche, accompanied by a salad of microgreens, seeds and a Dijon-mustard dressing, tasted like heaven.

It began to drizzle, and we huddled under the umbrella, eating in silence. For a few minutes, it felt as though the virus didn’t exist.

Our next meal out was at the Grille Shack, on Clarence Drive near Gordon’s Bay, en route back from visiting the Harold Porter botanical gardens. I was feeling decidedly Woody Alleny that day, and also very hot. “I don’t think we should go in,” I whispered to B as we approached the restaurant. “I think I’m getting Covid.”

He pointed out that we’d just done a brisk double loop around the gardens, I was wearing a yak-wool polo neck and it was 27 degrees outside. Besides, when my temperature was taken at the entrance to Harold Porter, it had been a gecko-like 35.2 degrees.

After lots of hand gesturing – some, it must be said, faintly rude – B managed to cajole me across the threshold, where our details and temperatures were taken. I was a solid 36. Inside the restaurant were the real brunch braves: families laughing around tables, masked couples studying menus, grey-haired men fresh off motorbikes.

Even though it was blustery outside, we opted for a table overlooking the back garden, and had the whole area to ourselves. I peeled off my yak jumper, asked the waitress to repeat herself three times, as her mask made her sound like Sylvester Stallone in a hot-dog-eating competition, and tried to settle into the experience. I couldn’t. A toddler at a table on the veranda near us kept wandering about and his mother kept leaping up to stalk him around the garden and play area. There was something so wrong and sad about a little boy in a mask, in the sun, being watched over by a woman in a mask, in the sun.

I found it hard to enjoy my fish and chips, even though they were perfectly cooked and delicious. I might have also felt weird about the fish – since the onset of my inner Woody Allen, I had swapped my usual vegetarian diet for the occasional piece of hake. I dive with fish nearly every day. We have underwater discussions about décor and kelp gardening.

Needless to say, we didn’t hang around very long. We ate, donned our masks, tapped the card machine, and took a slow drive back home, gazing out at the ocean. Sometimes being in the car, mask-less and sticky with sanitiser, with the world streaming by on the other side of glass, feels like the safest place to be.

As South Africa cautiously moves into a new phase in the pandemic, being out and about will hopefully feel less alien. A less neurotic (and much richer) friend has been dining up a storm in recent weeks, taking advantage of winter specials at fine-dining restaurants, working his way through seven-course meals INSIDE fancy restaurants. He thinks nothing of working on his laptop in a café, and I’m terrified he’s going to ask us to go to a bar for a gin.

While I’m not quite there yet, I did have a breakthrough last week. After my daily dive near Simon’s Town, where I apologised to the fish for eating their friends and vowed never to do it again, I slowed the car near my favourite café. There was one chocolate éclair in the window display. I had to have it.

After having my temperature taken (maximum gecko level) and scrawling my name and phone number all over the register, my frozen hands barely able to hold the pen, I settled into a chair in the back courtyard. The sun made geometric blocks on the paving. It warmed my damp head, heated my shoulders and thawed my reptile blood. Everything slowed: the panic, the vigilance, the wariness, the distrust. And as Sharon, one of the wonderful staff members who has now returned to work, put my cappuccino and éclair on the table, it felt like a gift. We eye-smiled, I mumbled something about it being a beautiful day and removed my mask. Closing my eyes, I bit into the éclair, savouring the chocolate and choux pastry, the cool neutrality of cream. Drowsing in the sun, I sipped my coffee, made short work of the éclair, and felt just as I did this time last year: damp, content, unhurried and unexpectant, with knees full of urchin spines.

I ordered another cappuccino, stretched out my legs and smiled at a group of silver-haired women settling into chairs in the shade. Good for them, I thought, getting out and about! Good for me! And I spent the next hour discreetly digging the spines out of my knees with a surgical needle I carry with me, feeling I might be finally exorcising the Woody voodoo. DM/TGIFood

Helen Walne is an aspirant vegan who detests food snobs, kale fascists, tartare sauce and misplaced apostrophes on menus, but is very fond of broccoli.