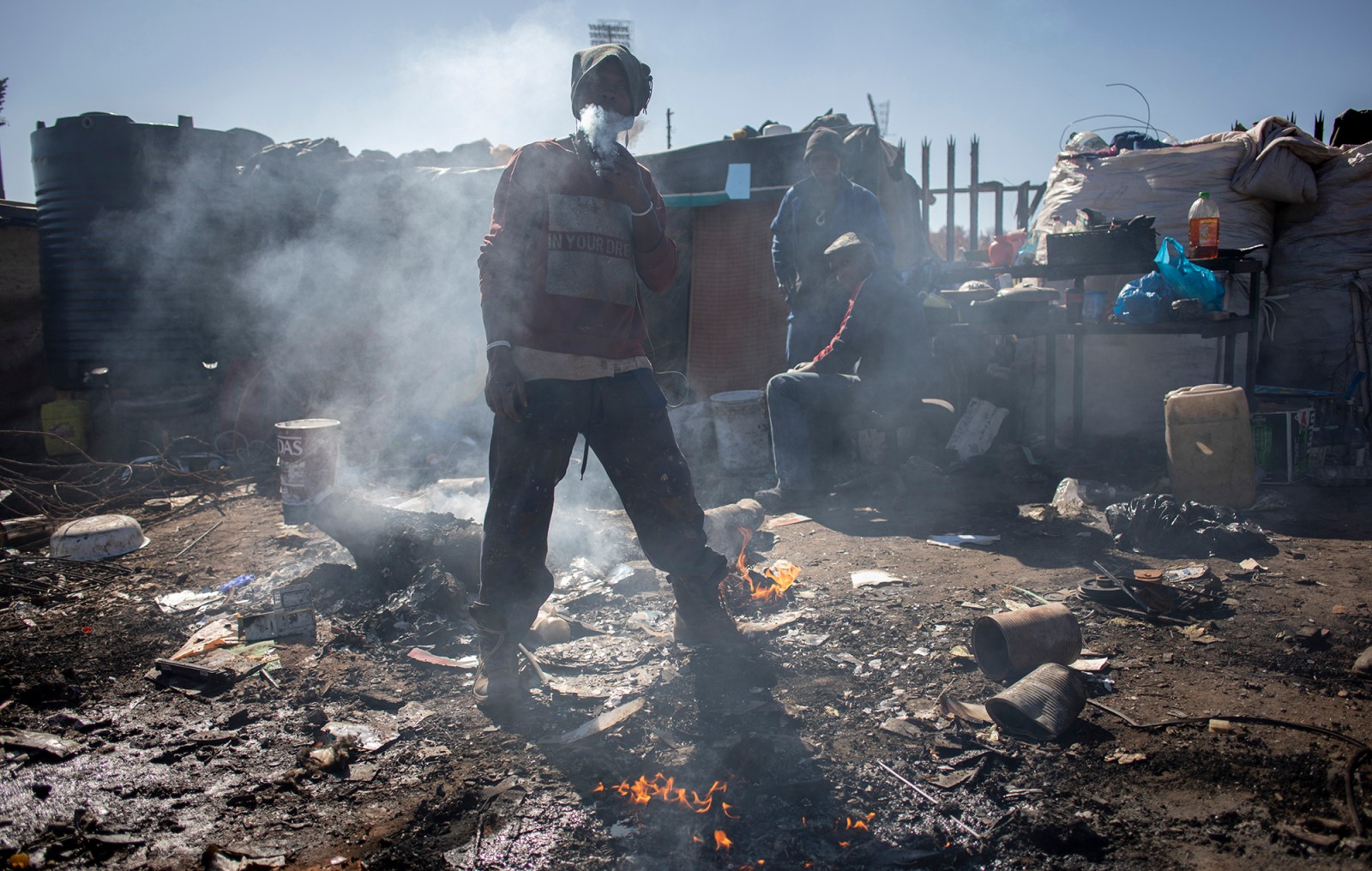 A recycler in Pretoria stands amid burning plastic and metal as he and other recyclers extract the metal content. (Photo: EPA-EFE / Kim Ludbrook)

Transnet has adopted a multi-stakeholder approach in dealing with the challenges of cable and scrap metal theft, as well as diesel theft from its pipeline. The state-owned logistics company is working with peer Prasa to circumvent cable and scrap metal theft while on diesel theft, Transnet is collaborating with law enforcement and liaising with the Department of Mineral Resources and Energy about fuel regulation. In the interim, however, don’t point the finger at Transnet about diesel theft, says its group CEO Portia Derby. Instead, look at the environmental context and enabling factors.

The curious case of cable and scrap metal theft remains a largely unresolved riddle. There are too many variables and issues at play. The complexity has often overridden policy solutions. A similar problem is being witnessed with diesel theft.

Although arguably in its infancy, diesel theft is exhibiting comparable levels of resilience. And, if not nipped in the bud, diesel theft bears the possibility of spiralling into an even bigger problem.

What is clear, though, for both problems is that the theft is lucrative for those who indulge in it. Furthermore, cable and scrap metal thieves are handsomely rewarded through the export market for their audacious endeavours. On balance, the spoils gained from engaging in the illegal activities outweigh any potential repercussions. The inherent dangers and the detrimental effects on critical infrastructure arising from the criminal conduct are self-explanatory. There are also the added costs of heightened vigilance and repairs.

Also, consider the harmful ripple effects on and consequences for the wider economy.

Successive trade ministers have devised policies and associated regulations to stem the proliferation of cable and scrap metal theft and to deter prospective exports – to no avail.

On occasion, there have been a few instances of “shock-and-awe” arrests of scrap metal dealers and syndicates, and subsequent prosecutions. But no matter the policy solutions devised and the tactics adopted by authorities, cable and scrap metal theft continues unabated.

Diesel theft, too, is gathering pace.

“High international prices have fuelled a massive expansion of scrap metal exports, which has negatively impacted upon supply to domestic mills. And is associated with cable and metal theft, and the masking of illegal exports of precious metals.”

“Despite the price preference system implemented by ITAC [International Trade Administration Commission], access to quality scrap and pricing remains a serious challenge for foundries, and for steel mini-mills in particular.”

In July 2020, Trade, Industry and Competition (Dti) Minister Ebrahim Patel issued a trade policy directive to ITAC, instructing the commission to “investigate the market conditions around the demand-supply imbalance in the scrap metal industry as a result of Covid-19”.

“The objective… is to determine appropriate amendments to the price preference system guidelines which can address the shortage in affordable, good-quality scrap metal,” Patel said at the time.

ITAC has two months to conduct the investigation. As the ITAC process unfolds, the export of ferrous and non-ferrous waste and scrap has been halted – with terms and conditions attached for exceptions and exemptions.

The Dti estimates that scrap contributes R15-billion to GDP. Construction, mining and transport equipment manufacturing, which have a collective contribution of R750-billion to the economy, use metal products the most, according to the department.

The stakes are high on both ends of the spectrum.

Although there are policies in place for not exporting scrap from South Africa, people still go to scrap dealers. It is a market issue for the Transnet CEO.

“People have got to deal with the whole market – the buyers and the sellers,” according to Derby.

“… What is interesting is that during the hard lockdown, cable theft – theft of all kinds of material even on rails – went down significantly. The minute the scrap yards opened, it went up again,” the Transnet CEO revealed.

Transnet has been affected, but not to the same extent as the Passenger Rail Agency of South Africa (Prasa). That is largely attributable to the fact Transnet uses a predominantly diesel network, while Prasa operates on electricity.

As a way around this challenge, “we’re talking to them about seeing whether there is a possibility for a conversion to diesel,” says Derby.

In addition to cable and scrap metal theft, Transnet is confronted with diesel theft from the Durban-Johannesburg fuel pipeline.

This type of crime is not only outright brazen, but it is also downright dangerous. However, it is unclear whether the fuel has crossed the South African border and made it into other countries. It is an area of investigation for authorities, according to the Transnet CEO.

The state-owned rail, port and pipeline company has been working with stakeholders, including law enforcement authorities, on the problem. So far, the collaborative efforts have resulted in arrests. In July 2020, three suspects were nabbed in Mpumalanga after being found in possession of R1.4-million worth of diesel.

“We are starting to make real progress,” notes Derby.

On the policy front, Transnet is liaising with the Department of Mineral Resources and Energy. Although fuel is a regulated industry, there are loopholes with reference to diesel.

Beyond the scope of policy, however, the reality remains that a market exists for stolen diesel.

“It’s easy to blame Transnet. But I think it’s collective. Farmers and mining companies must stop buying when it’s not a registered and known entity that’s making the fuel sales,” Derby points out. BM/DM